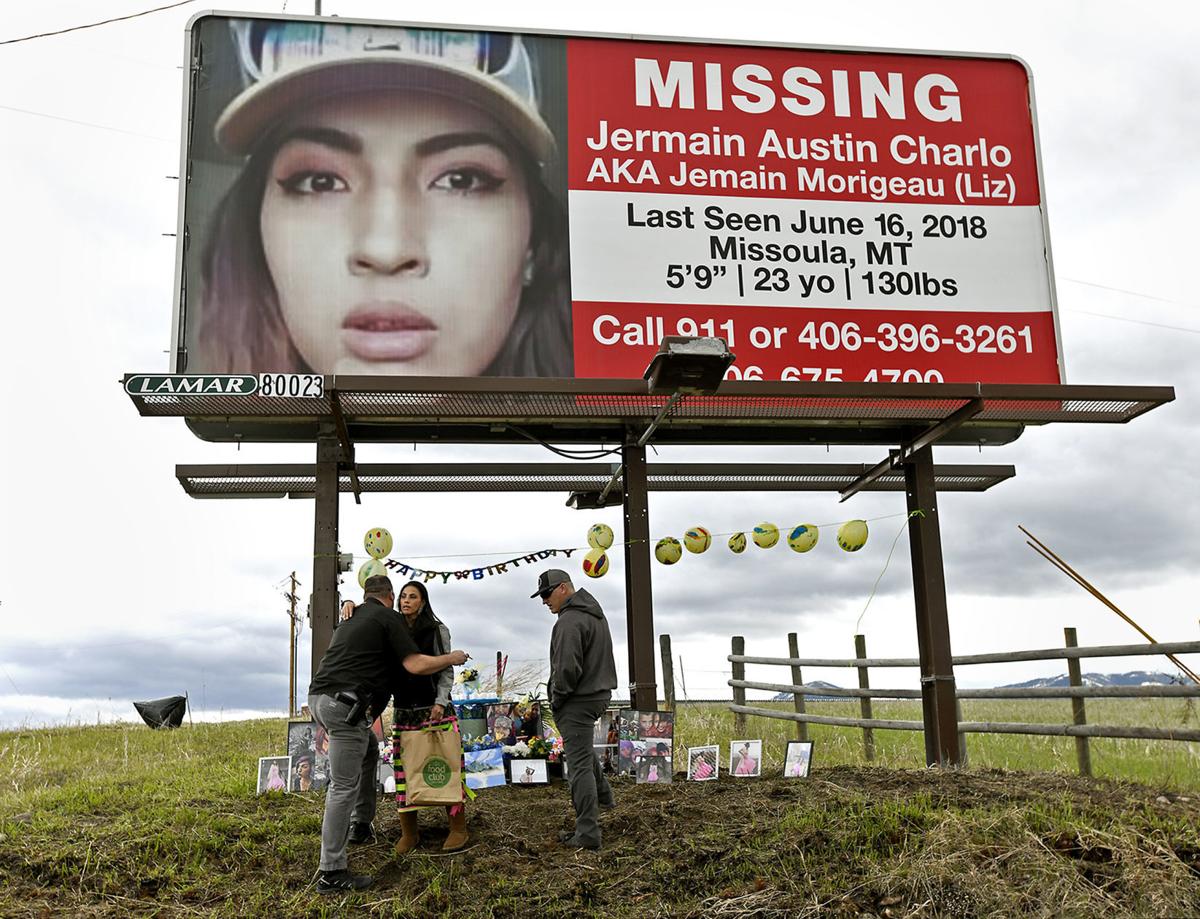 Valenda Morigeau, aunt of Jermain Charlo, greets Guy Baker, a detective with the Missoula Police Department, at a gathering on Highway 93 North on Tuesday to mark Charlo's 24th birthday. Charlo has been missing since she was last seen in Missoula in June 2018. 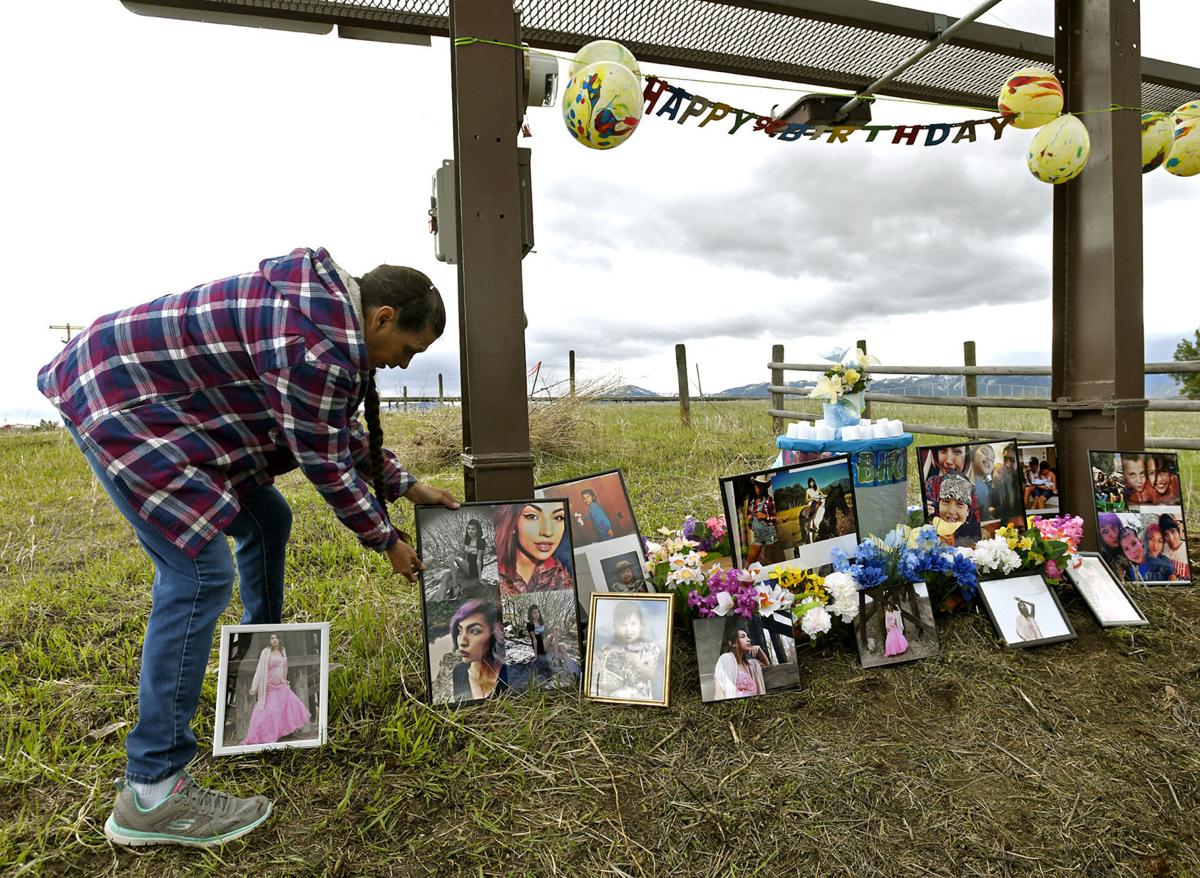 Vicki Velarde, Jermain Charlo's grandmother, places photographs of Charlo under the billboard asking for help locating her on Tuesday near the Wye.

Valenda Morigeau, aunt of Jermain Charlo, greets Guy Baker, a detective with the Missoula Police Department, at a gathering on Highway 93 North on Tuesday to mark Charlo's 24th birthday. Charlo has been missing since she was last seen in Missoula in June 2018.

Vicki Velarde, Jermain Charlo's grandmother, places photographs of Charlo under the billboard asking for help locating her on Tuesday near the Wye.

Jermain Charlo, last seen near Fifth and South Russell streets in Missoula during the twilight hours of June 16, 2018, was celebrated on Tuesday in a way that was a simultaneous plea for answers. Below the billboard on Highway 93 North bearing Charlo's face and information, family and friends gathered to mark Charlo's birthday and share memories.

Growing up, Charlo's family gathered around her grandfather's ranch in Dixon. She loved animals and sketching or painting. A few paintings were on display Tuesday, tucked in beside portraits of Charlo. As she grew older, she became especially thoughtful of environmental impacts, Morigeau said, and learned to knit baskets and backpacks from plastic bags.

They had a close family, and Charlo was younger than her aunt by only 10 years.

"She was more like my little sister than my niece," Morigeau said.

Morigeau thought of Charlo's three siblings and two children on Tuesday as the shrine neared completion, and how the family has tried staying together for solace in the young woman's absence.

"It's more of a comfort thing," she said. "Sticking together to stay strong for her. We have to stay positive so that she can stay positive out there."

Morigeau said she misses Charlo coming by the house with her kids on holidays, particularly Halloween.

Vicki Velarde, Morigeau's mother, said Charlo had stayed with them for a summer in New Mexico, and her creativity showed then as it did Tuesday in the family's display. It was Charlo's dream, Velarde said, to go to the Institute of American Indian Arts in Santa Fe, and Velarde was going to help her get there.

"She spent all the time she could at the school," Verlarde said. "If you're an artist, you look at everyone's work."

Charlo attended the Two Eagle River school in Pablo, and worked on art projects there with her cousins. Pictures from their "Pink Dress Project" shined among the other pictures on Tuesday below the billboard and the gloomy clouds overhead. In the photos, Charlo strikes a number of poses in a pink prom-style dress. It's a stark contrast from the typical Charlo fashion, Morigeau said, which might have included some cowboy boots and muddy jeans.

These days, Morigeau holds on to the hope that Charlo may still come home.

Law enforcement officers from local to federal agencies have logged several thousand hours investigating Charlo's disappearance since she was first reported missing. Investigators said early on in the search that they believe she is the victim of some crime, based primarily on her sudden hiatus from social media.

Charlo's story is one of those at the forefront of the issue of murdered and missing indigenous women and girls, an example held up to bolster those cases as a priority for law enforcement and lawmakers. Legislators on Tuesday officially passed Hanna's Act, which funds a Montana Department of Justice position to investigate missing persons reports like Charlo's. Agencies at different levels have since made a vocal point of working more closely with one another to hustle resources out to missing persons reports.

As months pass without Charlo's return, advocates have been busy keeping the MMIW issue a visible one this year — from a heavily attended vigil on the University of Montana campus in January to a four-day, 80-mile walk across the Flathead Indian Reservation.

Law enforcement has also kept on the move. Missoula Detective Guy Baker, lead investigator on the case, said Tuesday police have interviewed 50 people and conducted more than a dozen searches to date.

"There isn't a week that goes by that I don't do something or spend time on this investigation," he said. "Our department and myself, personally, are committed to finding Jermain and providing some sense of justice and closure for her family.

"I want to know what happened to her and hold accountable whoever did something bad to her."

Baker watched as family members stood together, some upset, some looking tired, but all present to celebrate Charlo's birthday in a public way, in case someone driving by that billboard might have a flash in their minds about something they saw 10 months ago to lead to Charlo's return.

"They're as committed today as they were from the first day she disappeared to finding out what happened to her," Baker said.

An earlier version of this story incorrectly referenced accounts that Jermain Charlo was seen running down an alley the night she disappeared. That account was from a night prior to her disappearance.