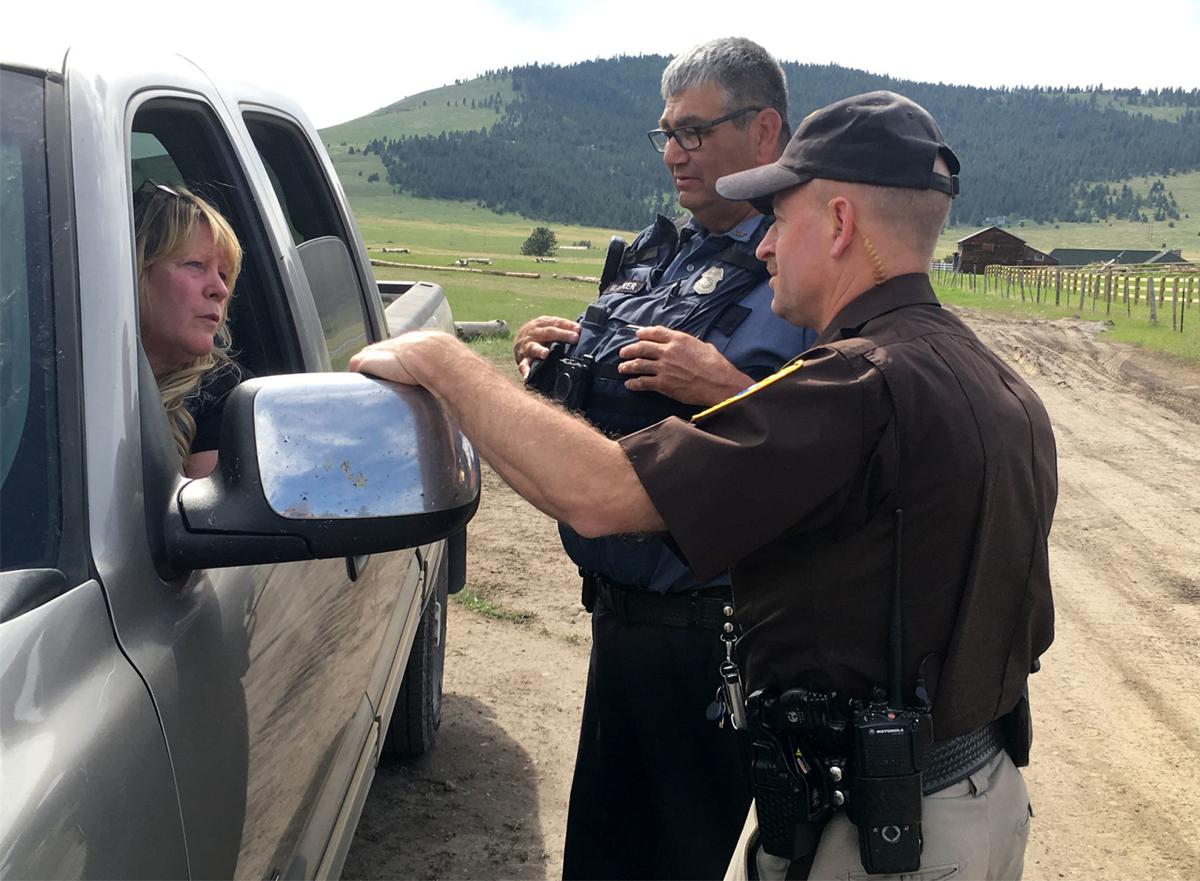 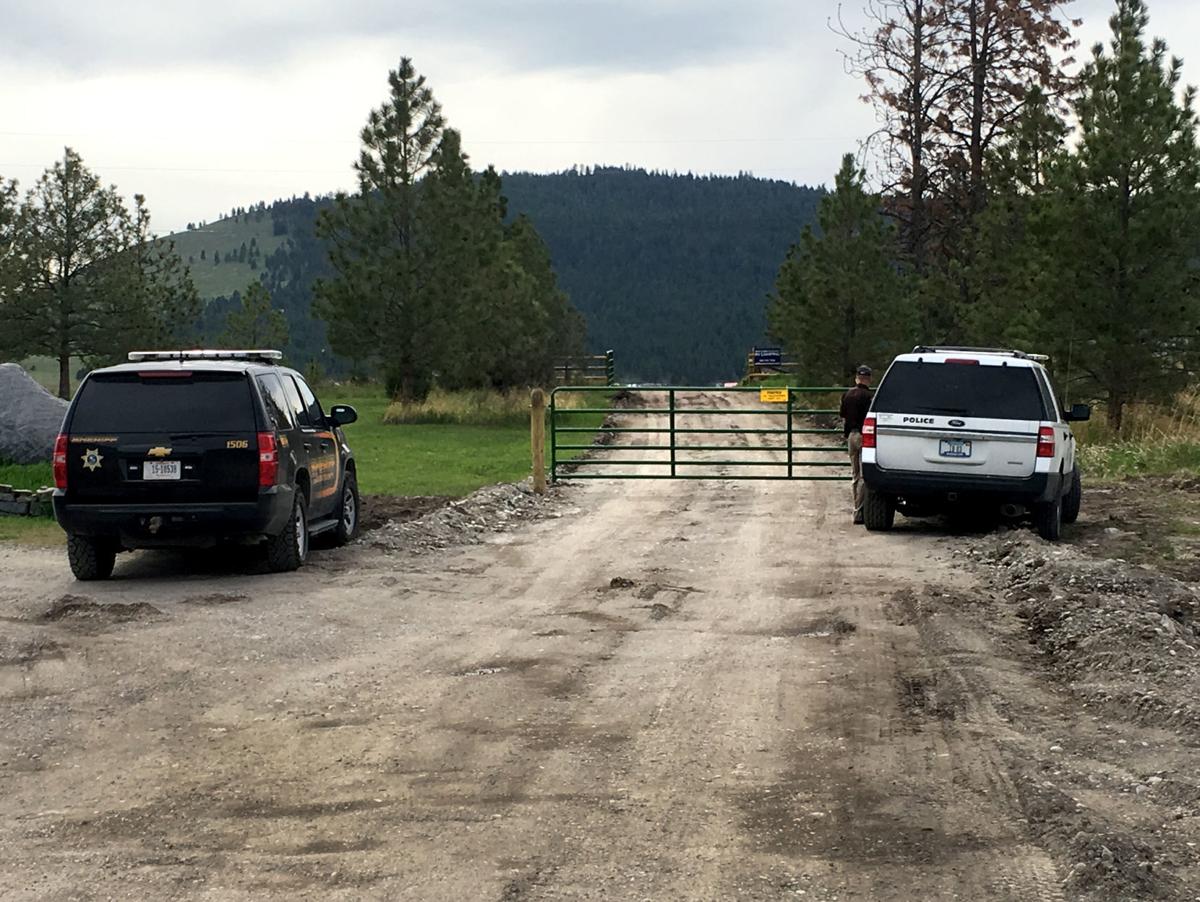 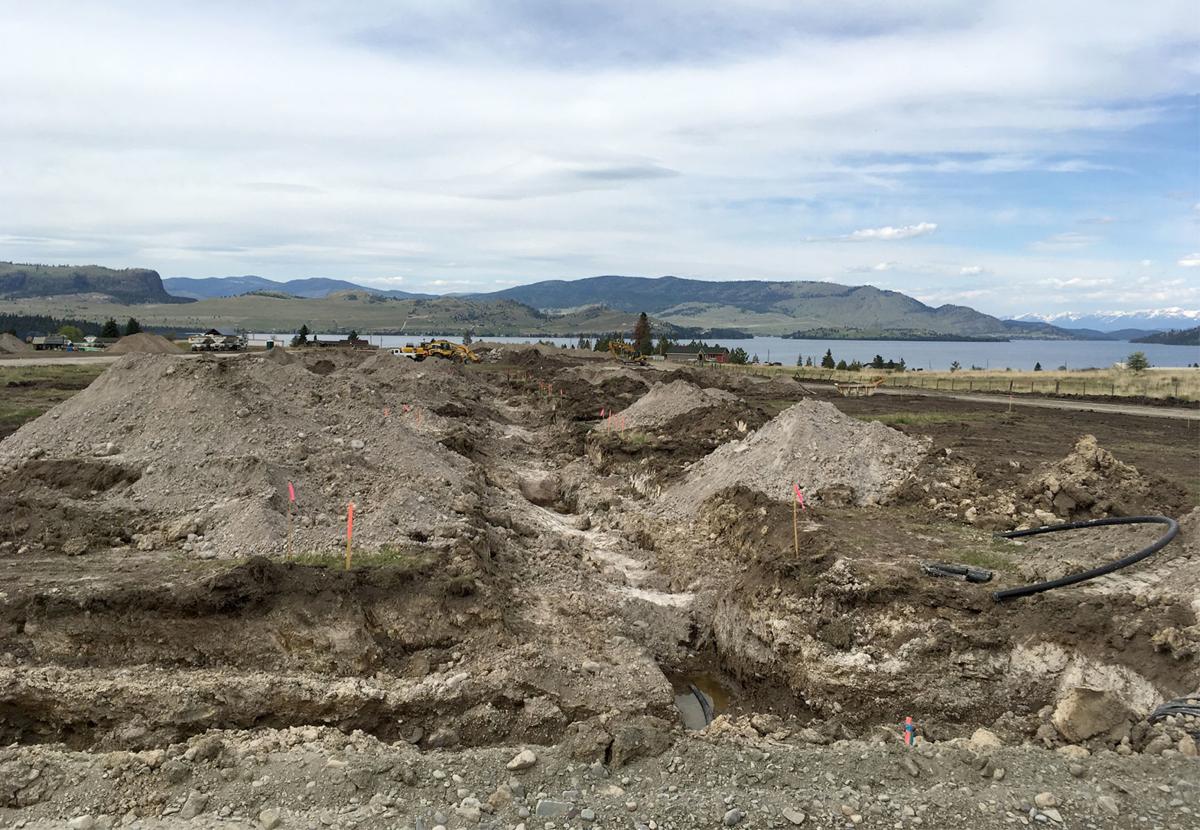 The first phase of Wild Horse RV Resort in Big Arm, where construction has been paused in a dispute over access.

BIG ARM — When Lori Lundeen arrived at her property here earlier this week, she found her path blocked.

In April, Lundeen broke ground for a 60-lot RV park overlooking Flathead Lake. Several trucks, excavators and backhoes were working to get the first phase ready by July. But on Monday, employees from the Confederated Salish and Kootenai Tribes’ Tribal Land Department gated off the access road she and the construction team had used.

“I showed up at my construction site, Wild Horse RV Resort, and found them putting posts in and a 16-foot gate,” she said.

The Lake County approval process had Lundeen convinced that the routes leading into the resort were county rights-of-way. But the Confederated Salish and Kootenai Tribes maintained that they weren’t, and this week took action to close them off — much to Lundeen’s chagrin.

“I just can’t believe I wouldn’t have access,” she remarked Monday, after both county and tribal police officers had arrived on the scene. The county officer had instructions to open the gate. But the tribal officer had been directed to close it by 5 p.m.

This altercation capped more than a year of confusion between Lake County and the Confederated Salish and Kootenai Tribes over access to the resort. Lundeen’s proposed access routes called for motorists to take Big Arm’s Seventh Street south from U.S. 93, then turn west and enter the resort through some combination of E Street and the not-yet-built F and H Streets.

Big Arm sits in both Lake County and the tribes’ Flathead Indian Reservation. Land use within this dual jurisdiction is governed by a complex thicket of laws, administrative actions and court rulings dating back to the reservation’s 1855 establishment. In recent years, the county commissioners and tribal government have differed over property taxes, density guidelines and, now, this dirt road in Big Arm.

When the Lake County Planning Board took up Lundeen’s proposal in April 2018, Janet Camel — a member of both that board and the tribes' economic development planning director — questioned the county’s authority over the access roads. The Planning Board nonetheless approved the proposal, and the Lake County Commissioners granted conditional approval the next month.

That document stated that “prior to final plat approval, legality of the proposed access to the subdivision through the Big Arm Townsite will be investigated by Planning Staff and the applicant to confirm that Lake County considers the access to be legal.”

The tribes continued to question that legality. In an Aug. 2 letter to the County Commissioners, Tribal Council Chairman Ron Trahan wrote that “a large portion of the route you authorized is entirely surrounded by Tribal land held in trust for the tribes by the United States (federal government). We see no evidence that the County has completed steps to create, build or maintain the proposed route as a public road prior to your instant action.”

Citing a series of laws beginning with the 1904 Flathead Allotment Act, Trahan argued that Lake County lacked jurisdictional authority over Lundeen’s proposed access route. He suggested resolving these questions “in an amicable manner,” in part because it would shield Lake County from the legal liability that could arise from improperly granted access, and invited the commissioners to make their case at a Tribal Council meeting.

Their concerns remained in January, when Lundeen sought the county’s permission to modify the side streets that the access route would use. Trahan wrote to county planning director Jacob Feistner, reiterating the tribes’ stance. On Jan. 31, the Lake County Commissioners nonetheless approved the amendment.

They didn’t just change the streets. They also struck a sentence, added after the conditional approval, which said, “Lake County shall be held harmless in the event that the primary and secondary access roads are found not to provide legal access to the Wild Horse RV Resort Subdivision.”

“Possibly by that time we had enough information from Wally (Congdon, the Lake County attorney) where we were comfortable in our position that we had jurisdiction over the roads and we didn’t (need to) have that hold harmless agreement put into the subdivision agreements,” explained Decker as his colleague, Commissioner Dave Stipe, concurred.

Through months of legal research, Congdon had compiled several other documents spanning a 116-year period from 1855 to 1971 that he said established Lake County’s authority over the roads.

“My impression is that both the Commissioners and Wally are confident in the County’s ownership of the platted roadways in the Big Arm townsite,” Feistner wrote in a Feb. 21 email to Lundeen’s planner, Marc Carstens, explaining the decision.

In Lundeen’s eyes, she was clear to proceed. “It all showed I had free legal accesses, and I would not have moved forward with this if I did not have access,” she said.

The supervisor with Sandry Construction had been overseeing the project. “About 10 a.m. this morning, I got a call from one of the trucks saying, ‘We’ve got a problem here,’” he told the Missoulian.

Tribal Lands staff, with council approval, installed a metal gate across E street. The situation soon deteriorated. By 4 p.m., both a Flathead Tribal Police Officer and a Lake County Sheriff’s Deputy had arrived on scene — with exact opposite instructions concerning the gate.

““I’ve gone through every hoop, every hurdle,” Lundeen lamented. “I just showed up and they’re locking me out.”

“We’ve done a few jobs over the years (in) Polson and surrounding areas,” said Hanley. “I’ve never seen anything like this happen.”

In the end, the gate was closed. Tribal spokesperson Rob McDonald noted that the gate did not entirely block access to the property. Lundeen said she was looking at alternative routes but hadn't yet found one that would work.

On Tuesday the Bureau of Indian Affairs sent Sandry Construction a formal notice of trespass, informing the firm that it was using a tribal tract without a right of way, and that it would soon be assessed for damages.

“I’m just putting everything on hold,” Lundeen said. She had been aiming to complete the first, 12-lot phase, double-chip seal E Street, and open for business July 1, and had already put the lots on the market. But now, she said, “I’m just telling them everything is on hold.”

And the legal stances are still at odds. “It’s the tribes’ contention that the county has not shown evidence of perfecting title of right-of-way on the proposed streets,” said McDonald. While Lundeen felt that she had completed all necessary steps, McDonald noted that she had been made aware of the tribes' concerns at that April 2018 meeting, and had never requested a right-of-way from their government.

Lake County hasn't budged, either. “I don’t think we’ve changed our position,” said Decker, who said that the county commissioners had a duty to protect citizens’ concerns in public-access issues. “It looks like this is going to head to litigation of some kind, so then we’ll turn it over to the lawyers.”

The Tribal Council resolution that approved installation of the gate also stated that “a quiet title and restraining order will be pursued in district court.” Nothing had been filed as of Wednesday morning.

At the same time, she said, “I’m all about working it out and not getting lawyers involved.”

“It’ll all work out,” she predicted. “Things always have a way of working out.”

POLSON — If Gale Decker and Caroline McDonald agree on one thing, it’s that their electoral face-off has high stakes for Lake County.

POLSON — For seven years, a scattering of tribally owned lands around Montana have enjoyed a state tax break. That could end if Lake County ge…

A Missoula woman told authorities this week that Aaron Steven Beadle, 36, only stopped attacking her after her two boys, ages 15 and 12, stepp…

POLSON — The Upper Columbia Conservation Commission is set to expand its membership under a new law.

Lake County and the Confederated Salish and Kootenai Tribes have agreed to leave a disputed roadway open while a right-of-way lawsuit proceeds.

The Lake County Commissioners are doubling down on their opposition to a proposed bill that would ratify the Confederated Salish and Kootenai Tribes Water Compact.

The Confederated Salish and Kootenai Tribes have won a lawsuit against Lake County and a property developer.

The first phase of Wild Horse RV Resort in Big Arm, where construction has been paused in a dispute over access.