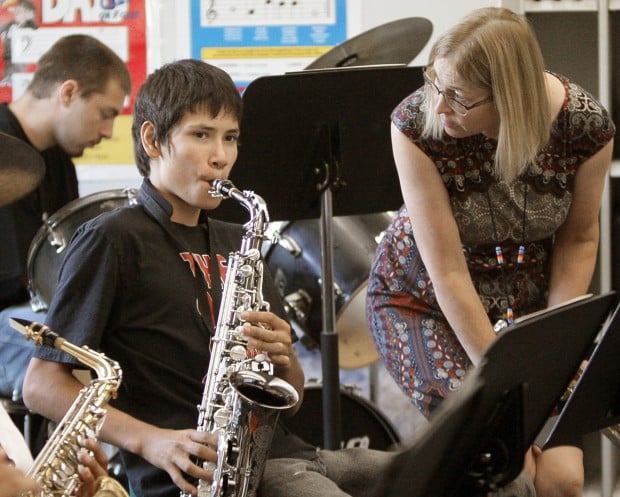 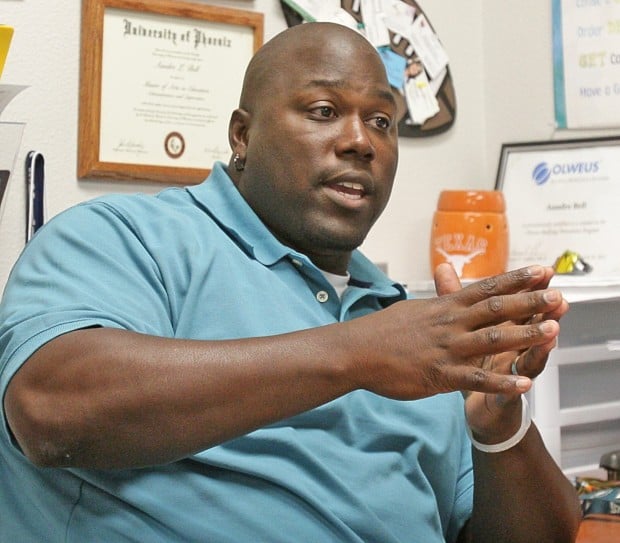 LAME DEER — Natalie Parker, the new music teacher at Lame Deer Junior High, already has proof of how the arts can change students.

Last week, the eighth-graders in Parker’s general music class played bucket drums for the first time. Up until that point, a couple of boys regularly disrupted the class with their antics.

Then the bucket drumming began, and that immediately engaged one of the two mischief-makers. A natural leader, he told the other kids to pipe down when Parker called for quiet, rather than causing the commotion himself.

“To see that kind of leadership start coming out of students is really exciting,” Parker said Tuesday.

That music and art, drama and dance can change youth is no mystery. Studies have shown how participation in those activities can breed success in other parts of a child’s life, including academics.

That is the impetus behind the two-year “Turnaround Arts” initiative created by a partnership between the U.S. Department of Education and the White House Domestic Policy Council.

Lame Deer Junior High is one of eight high-poverty elementary and middle schools in the nation chosen to take part in a new arts education program designed to help transform low-performing schools.

The junior high and Lame Deer High School are housed in the same building, a few miles from the center of the tiny town on the Northern Cheyenne Reservation. There is teacher crossover between the two schools, so although the initiative is aimed at the junior high, both schools will benefit.

Lame Deer students will see more excitement in October, when world-renowned artists come to work with them. As part of the initiative, the school has been adopted by ballet dancer, choreographer, producer and director Damian Woetzel.

He will make a visit to the school this fall, along with the Silk Road Ensemble, a collective of talented musicians, to teach and perform with the students.

Lame Deer learned last spring that it had been chosen as one of the Turnaround schools. This summer, Aundre Bell, the high school/junior high principal, attended training at the Aspen Institute in Maryland, along with Parker and art teacher Susan Wolf.

They trained with representatives from the other seven schools, gaining support from each other and gleaning ideas of how to use the arts to help the Lame Deer students. All of it together will help the school, Bell said.

Getting everyone on board

Sometimes trying to implement a great idea is difficult when only a few people are on board, Bell said.

“But when you have the White House pushing this initiative, it goes a long way,” he said.

Fletcher, who spent Monday talking with staff and students, said she’s already seen a change from when she visited the school in the spring to determine if it was a good candidate for the program.

“I watched one of Mrs. Parker’s classes (Tuesday) and I had a lump in my throat the size of a grapefruit because last year I was in that room and it was empty and it had not been used for six years,” she said.

She acknowledged that the school is "at the beginning of a very long road" of integrating the arts into the school.

"But we have already seen so many hopeful signs," she said.

One person helping with that is Parker, whose husband is a member of the tribe. Parker is a veteran music teacher who has taught in a number of Montana towns as well as in eastern Washington.

About five years ago, she and her family started spending summers in Lame Deer with family, working on a log cabin. When Parker found out the music teacher post was open at the school, she decided it would be a good fit. It didn’t hurt that the arts initiative would provide her the resources to equip her classrooms.

Already Parker is teaching a high school band class, with students playing clarinet, saxophone, piano and drums. In the junior high, she’s teaching a general music class in both grades and so far has eight students in each.

Her goal is to someday teach music to all of the junior high students. She already has a plan to lure more seventh- and eighth-graders into music.

“I’ve applied to NAMM and I want to get marimbas for the junior high,” she said. “I had a marimba band in Connell (Wash.) for eight years and it’s a fabulous hands-on, immediate success thing for that age group.”

Parker is equally excited to implement some of the ideas she learned at the Aspen Institute about integrating music into other academic areas. For instance, she is going to work with a junior high math teacher on introducing Pythagoras, the father of math and music.

In ancient times, math and music were one subject of study, not two, she said, and only split apart hundreds of years later. Now students can see how the two fit together.

“I’m really excited to collaborate with the other teachers, to make this integrated arts a happening thing,” Parker said.

Wolf also is working to blend art with other subjects at school. Already her classroom is filled with boxes of art supplies from Crayola.

To help with the arts integration, Crayola trainers will visit the school later in September to share workbooks with teachers designed to help them integrate arts into their own area of study.

Wolf wants to help her art students develop their talents and show them off to other students by putting them on exhibit. She’s also excited to stay in touch with the other teachers she met at the training, and particularly those from Orchard Gardens K-8 in Boston, which the Lame Deer staff was paired with.

“We’re just kind of at the beginning of this unfolding,” she said, about all of the connecting that can take place between teachers from both schools and the students. “I get chills just talking about it.”

Bell ordered webcams for the classrooms, so students from Lame Deer will be able to talk face-to-face with the Boston students. But he also sees the potential for some teaching going on.

“Our kids will teach them traditional dance for a period of time, and then their dance teacher will teach the merengue or Latin dance to our kids, and then we’ll just go back and forth,” Bell said.

The students at Lame Deer are no strangers to the arts, he said. At home, many of the youth are singers and drummers and beaders, as well as artists and carvers.

“Now with the arts initiative, we’re letting those kids bring all of that out, to say, ‘This is what I do at home, this is what I learned from my grandpa,’ ” Bell said. “Now it’s giving the kids the opportunity to showcase what they’re doing.”

In Wolf’s art room on Tuesday, C.J. Cryar, a high school junior, played alto saxophone in the band class. He played clarinet when he was younger, until music was no longer offered at the school.

“It feels good to have a band back in the school,” he said. “It’s nice to experience new things in life.”

Junior Michael Bowers, a piano player in the band, played music in the sixth grade. When he found out it once again offered, “I signed up immediately because I love music.”

Over in the art room, Marvin Garcia put the finishing touches on a baby moccasin he made out of clay. Garcia, also a junior, comes by his talent naturally. His grandfather paints portraits.

Garcia, who also does beading, also likes to draw.

“This is one of my favorite classes,” he said.

The bodies were found on Tuesday afternoon after a neighbor requested a welfare check.

After a friend of the married couple requested a welfare check, the Helena Police Department responded to the apartment.

MT Hospital Association: State's ban on vax mandates is now the law of the land

The Lewis and Clark County Sheriff's Office announced Friday that Courtney Brooke Atlas, who was convicted of killing his wife in 1983, has also admitted to the slaying of 19-year-old Pamela Dorrington of Helena in 1968.

Clean up begins in Denton after devastating fire

“It was hailing chunks of fire,” one resident said.

The judge agreed with the Board of Regents, finding that the Montana Constitution is clear in vesting power over the university system and its campuses with the board.