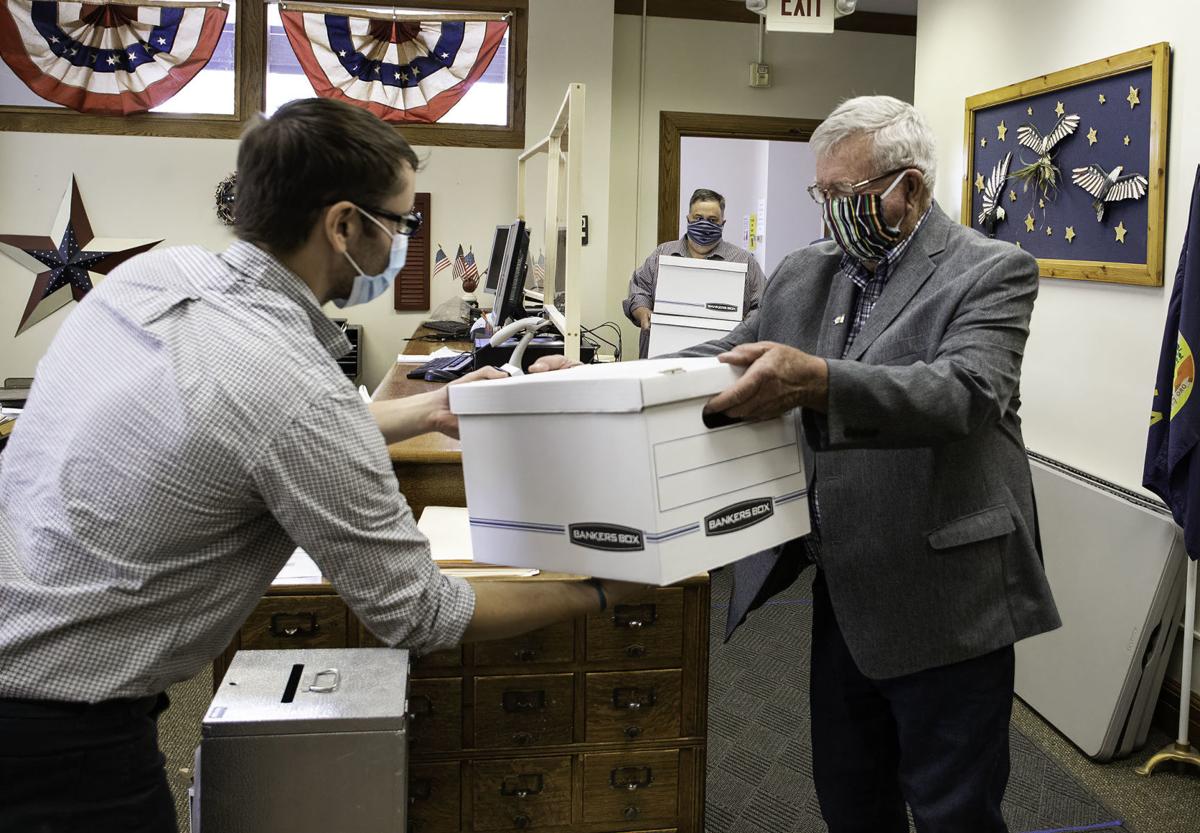 Dave Lewis, right, hands over signatures for a ballot initiative to legalize and tax recreational marijuana in Montana. New Approach Montana has gathered enough signatures for I-190 to be on the November ballot. 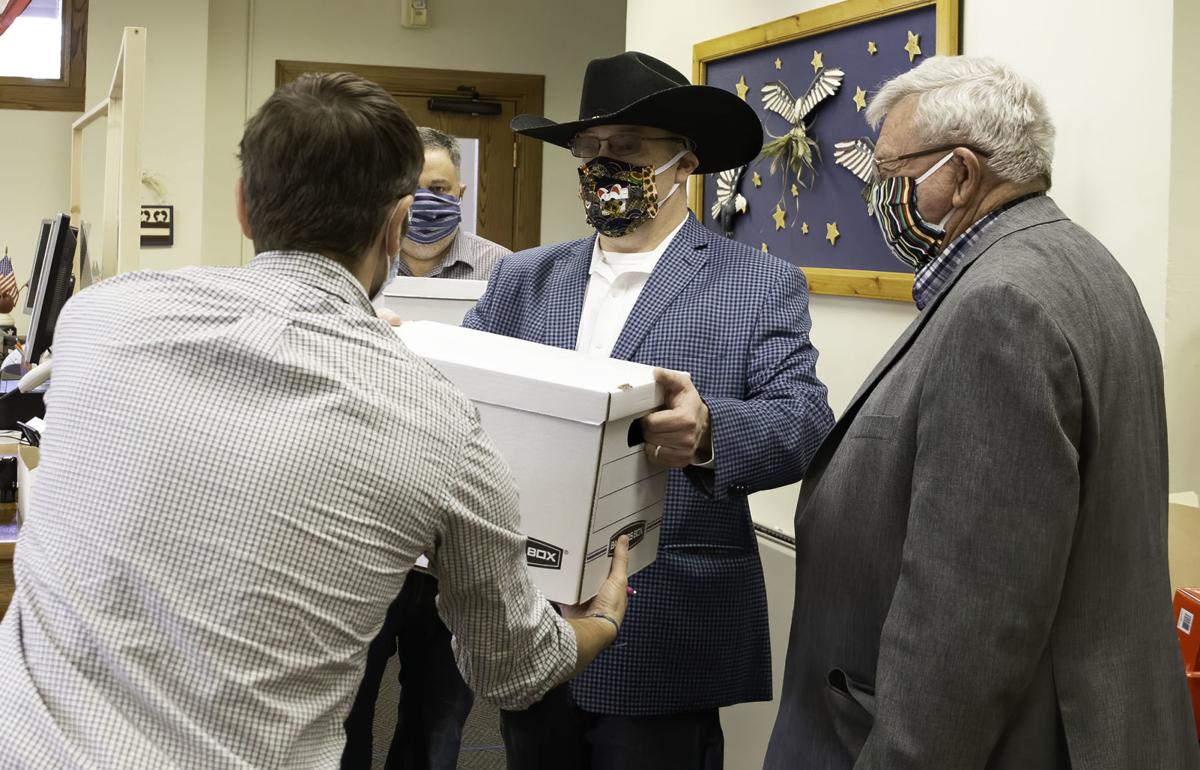 New Approach Montana director, Pepper Petersen (center) turns in signatures for I-190 Friday at the the elections office in Helena.

A ballot initiative group working to legalize recreational marijuana said Friday it had gathered nearly twice as many signatures as needed to get the matter on the ballot this November.

The effort needed roughly 75,000 combined signatures to qualify for the ballot. New Approach spokesperson Pepper Petersen said the campaign collected signatures from all 100 state House districts and would be delivered to county election officials in time for Friday's deadline.

The campaign had been stifled earlier this year as state officials installed social distancing measures to prevent the spread of COVID-19. After a state district judge denied New Approach's request to collect signatures electronically, the campaign got underway on signature gathering in early May, with fewer than six weeks to reach the 75,000-signature requirement. Petersen told the Missoulian in a phone interview Friday that New Approach had hired 200 people to blanket the state gathering signatures. County election officials still must verify each signature to qualify the two measures for the November ballot, with a deadline to do so by July 17.

Petersen said the campaign now will "slim down" to travel the state and gather support from state legislators, community groups, tribal leaders, doctors and teachers.

"We want to talk about what the impact of (what) the passage of this law is going to be," Petersen said.

Petersen said conversations with state leaders about marijuana legalization were tentative at first, but the tone has since changed as a potential economic crater from unemployment and business shutdowns due to COVID-19 weighs on officials.

"Now the conversation has changed to, 'Tell me about that tax money,'" he said.

The Governor's Office of Budget and Program Planning projects by 2025 legalization could bring in $4 million in revenue to the state general fund and another $43.9 million into state special revenue funds, including Fish, Wildlife & Parks, the Department of Public Health and Human Services, the Department of Commerce and Veterans Affairs.

Petersen said cannabis presents an opportunity to supplement the state budget when officials have estimated revenues to drop by 15.4% to 18.7% due to the coronavirus pandemic. The low end of those estimates would eat up the entire general fund balance cushion, as well as the fire fund reserves and budget stabilization reserves, and still require a $77 million cut in spending, state finance analysts said in mid-May. A month later, and coronavirus cases in Montana are trending upward again as the state reopens.

New Approach Montana raised more than $1.5 million since October 2019 and spent nearly $1.4 million through June 3, according to finance reports with the Montana Commissioner of Political Practices. Forty-five of New Approach's 54 contributions came from Washington, D.C., the largest of which is the D.C.-based New Approach Political Action Committee, which has poured $937,796 into the Montana campaign. The Marijuana Policy Project, which has played a key role in legalization across the country, has chipped in another $29,745.

Petersen said the state's relatively low — by many measures, the lowest — impact from the COVID-19 pandemic made Montana an attractive investment for groups looking fund a legalization campaign, which takes shoe leather to get signatures. Likewise, a University of Montana poll released in March 2019, which got 293 responses, found 50.5% of registered voters supported legalization while 37.4% opposed it. Matthew Schweich, deputy director of the Marijuana Policy Project, told the Missoulian after the poll was released that he found the results "encouraging."

Political analyst and University of Montana professor Lee Banville said 130,000 signatures is still a good hike away from a majority of a 600,000 possible voter turnout in November. But, he said, mobilizing a campaign to grab signatures from all 100 state House districts in a timeline crunched by the coronavirus-induced distancing guidelines is a good gauge for the campaign's ability to stake out more support in the next five months.

"Now it's about persuading the people who don't feel passionately one way or the other that this is the right step," Banville said.

While conservatives made gains statewide in Montana's primary two weeks ago, Banville said marijuana legalization is not necessarily carried by a single party.

"There's a strong libertarian streak in Montana and supporters of legalization can be found there," he said. "They can also be found in some of the more socially liberal winds of the state. So, it's not a red-blue issue, it really is sort of what's the appropriate role for government when it comes to something like marijuana."

A man living near Ninepipes told authorities Thursday he fired a warning shot as several people rifled through his vehicle at approximately 4 a.m. and that the suspects returned fire.

The testing, organized by the Confederated Salish and Kootenai Tribes Unified Command Center, involved four testing sites over four day. Residents of Lake County and the Flathead Indian Reservation were invited to attend.

The water park had a soft opening of the lap pool, with some modifications, June 10.

Hikers from the “M” Trail are being rerouted through the garden while the first switchback of the usual trail is under construction, giving the peonies more foot traffic than usual.

Add to the pandemic related aggravations the official cancellation of summer — at least if you planned to celebrate it at Stonehenge, the Druidic monument in Great Britain.

Timber workers across the West stand a better chance of overcoming pandemic-related economic shocks than many other industries this year, but rural economies still need to brace for more trouble.

Dave Lewis, right, hands over signatures for a ballot initiative to legalize and tax recreational marijuana in Montana. New Approach Montana has gathered enough signatures for I-190 to be on the November ballot.

New Approach Montana director, Pepper Petersen (center) turns in signatures for I-190 Friday at the the elections office in Helena.