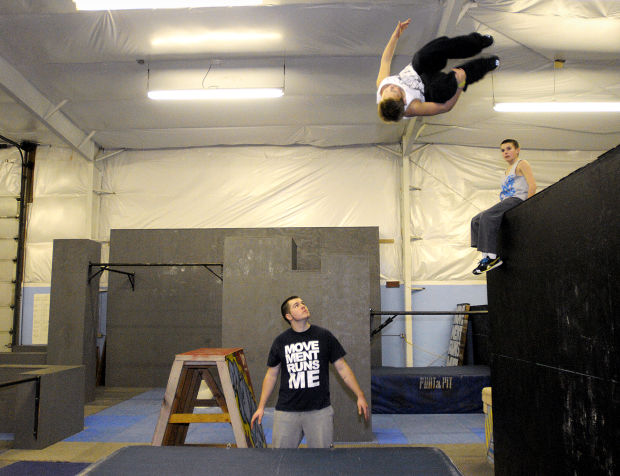 Chris Ledyard, 10, practices a parkour jump off a wall at Unparalleled Movement on Wednesday while co-owner Mike Graef spots Ledyard from below. The gym is offering classes in free running and parkour, a gymnastics-like discipline involving overcoming obstacles. 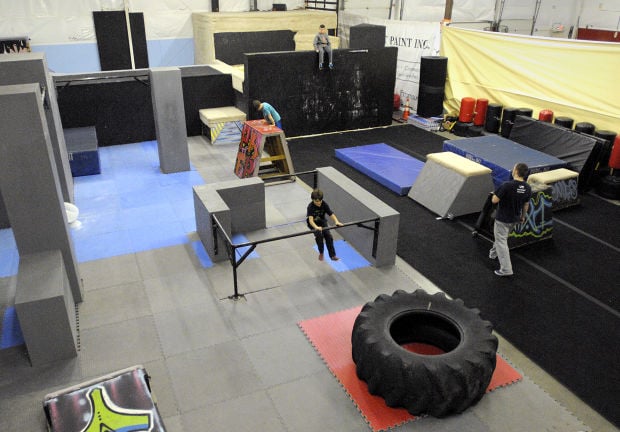 Unparalleled Movement is filled with vault blocks, walls, rails and other obstacles for learning parkour.

Chris Ledyard, 10, practices a parkour jump off a wall at Unparalleled Movement on Wednesday while co-owner Mike Graef spots Ledyard from below. The gym is offering classes in free running and parkour, a gymnastics-like discipline involving overcoming obstacles.

Unparalleled Movement is filled with vault blocks, walls, rails and other obstacles for learning parkour.

At a time when most young adults are debating the merits of college, Mike Graef and Kent Johns are growing their own business.

Now 19, Graef and Johns began teaching themselves parkour in a basement on a rainy day when they were 14 years old. The discipline of movement helps people overcome obstacles and efficiently and quickly move from point to point.

“There was a click when I was 15 that this is what I want to do,” Johns said, adding it was natural to open a gym.

In 2013, they joined with Michah Marino to open Unparalleled Movement, a 5,000-square-foot parkour gym filled with vault blocks, walls and rails – and a trampoline and foam pit. Classes are offered six days a week and include parkour, free running, fitness and self defense.

Most of the people who attend parkour and free running classes are 7 to 12 years old, or in high school and college, the duo said, adding they would like to expand their client base and the types of movement classes they offer.

The sort-of-urban gymnastics took off in the U.S. about 2004, with the first parkour educational program starting in 2006, Johns said.

The sport really started to grow in popularity in 2008 and the first gyms popped up in 2009. About that time, Graef and Johns were teaching themselves how to do parkour. In 2010, they started teaching a class at Mismo Gymnastics, then decided to open their own gym in late 2012. They opened the doors in early 2013.

Now, Unparalleled Movement is one of several dozen gyms across the country, but the only one in Montana. While parkour is gaining popularity across the state, Missoula has been great for the gym because people are so supportive of movement in general, Johns and Graef said.

Parkour is physical, but it’s also about perseverance, Graef said.

“There’s an obstacle. It’s hard to get over. You have to get over it,” he explained, adding the personal skills gained through parkour were helpful when opening the gym.

Johns’ and Graef’s concern was whether Missoula was large enough to support their business.

“But that’s definitely turned out to be not true,” Johns said.

People usually know within a few minutes of class whether parkour is for them or not, Graef said.

Several years later, the 10-year-old spends at least two nights a week at the gym.

“I really like it because there’s a lot of movement, because I hate standing still,” he said.

While Ledyard is athletic, he’s not into traditional athletics like his older brother.

“It’s super cool because I have my own sport,” he said.

His mom, Tracy, agreed and said the things Chris learns at Unparalleled Movement are things he was trying to do anyway. The gym, however, provides training. “So it’s a really nice structured environment where he learns how to do it safely.”

Often, Ledyard takes his skills out of the gym and finds obstacles in the urban landscape. Parkour also permeates other parts of his life, including artwork and sewing and has taught him perseverance.

“It really bleeds into all these different parts of his life,” his mom said.

“What you don’t see is all of the progressions they took to get there,” he said.

The sport is about positive movement, fitness and testing your boundaries in a safe way, Graef said.

“We train the fail safes before we teach the skills,” Graef said.

As students progress, the sport becomes more about free running – less about overcoming obstacles and more about expression through movement – and training becomes more individualized.

“Being so self-driven, I feel like you learn a lot about yourself when you’re training,” Johns said.

“There’s no one way to do parkour, and I think that’s appealing to a lot of people,” he added.

To learn more about Unparalleled Movement or to view class schedules, go to unparalleledmovement.com or find them on Facebook.

Training can cut risk of nearly all age-related diseases

When it comes to exercising for health, longevity and greater quality of life, what comes to…

Unparalleled Movement will hold a Drop and Shop event on Black Friday so parents can leave their kids to learn skills and enjoy an open gym. The gym will be open from 6 a.m. to 3 p.m. for drop-ins. Cost is $5 an hour. The parkour gym also offers activities on weekdays when there is no school. For more information, go to unparalleledmovement.com or find the gym on Facebook.

Heartfelt Fitness is about more than weights and bodybuilding, it’s about lifestyle training. The Missoula gym caters to women 50 and older and offers a safe, supportive environment, owner Treva Bittinger said.