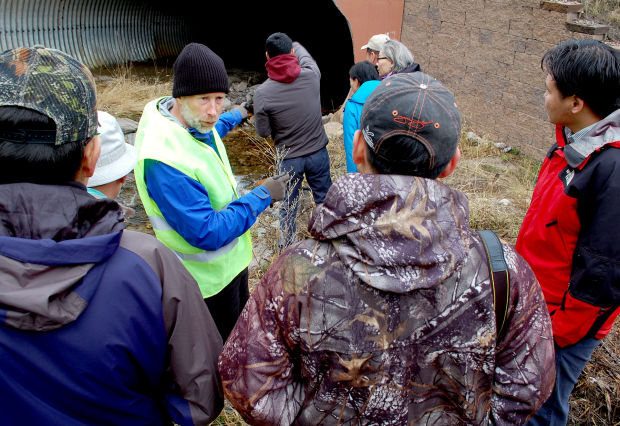 Marcel Huijser, a research ecologist with the Western Transportation Institute at Montana State University, discusses the engineering design of a U.S. Highway 93 wildlife underpass with government and mining officials from Mongolia on Monday. 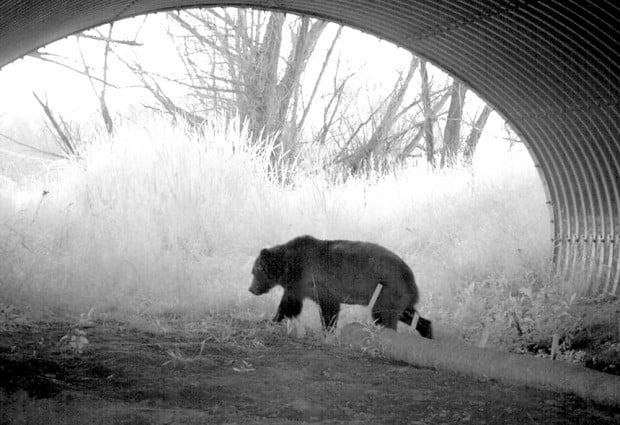 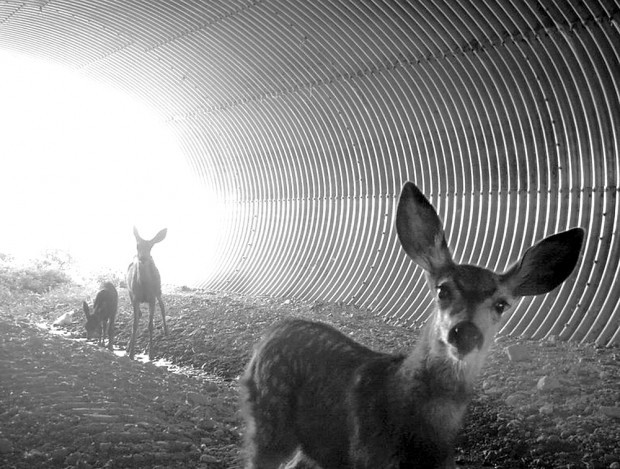 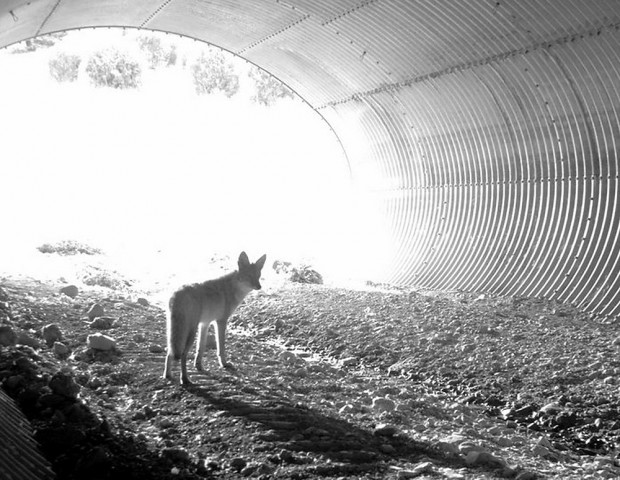 A coyote pauses underneath the highway. Photo courtesy CSKT and MDT

EVARO – The drone of traffic created a constant roar on U.S. Highway 93 early Monday as a delegation of Mongolian government officials joined scientists in climbing an earthen bank spanning the roadway.

Animal tracks left in the mud told them they weren’t alone. A few deer had moved over the crossing earlier in the morning. Moose, bobcats and bears weren’t far behind.

“With underpasses and overpasses, different species have different preferences for the type of structure they like to use,” said Marcel Huijser, a research ecologist at Montana State University, who joined the Wildlife Conservation Society’s multiday tour. “This is a long-term vision if grizzly bears are to strengthen their existing small populations, or recolonize areas where they used to be, decades ago.”

With funding provided in part by the U.S. Agency for International Development and the Trust for Mutual Understanding, the Wildlife Conservation Society led the team of Mongolian officials, including those in the mining and energy sectors, on a tour of western Montana’s wildlife crossings before taking the tour to New Mexico.

Half a world away, copper and gold mining has boomed at Mongolia’s Oyu Tolgoi mine, a project so large it’s expected to account for more than 30 percent of the nation’s gross domestic product when fully operational.

To serve the project – the largest ever undertaken in Mongolia – government officials are planning an expansive transportation network, and they’re racing to get ahead of the work.

If they do it right, they agreed Monday, the result might look similar to this network of wildlife crossings along Highway 93, with touches of a similar project along the railroad cutting Abo Canyon in New Mexico.

“We’re trying to minimize the impact of mining and other development,” said Buya Tulga, representing the Ministry of Environment and Green Development. “It’s why we’re studying here. We chose Montana because these are good examples of how to (enhance) the wildlife movement alongside the road.”

Standing on the overpass with the tracks still soft in the Montana mud, Tulga expressed concern that as development races forward in Mongolia, habitat will be fragmented and the region’s endangered species could be lost.

Much of that development is taking place south in the Gobi Desert and Mongolia’s eastern steppe. The new Ulaanbaatar-Beijing railway may further bisect the region’s prized habitat, jeopardizing the migration of several threatened species.

“Mongolia is facing a very big economic boom, which is mostly associated with mining,” said Lkhagvasuren Badamjav, the leading scientist at Mongolia’s Institute of Biology. “The development of this mining needs infrastructure development. But we need to build environmentally friendly, wildlife friendly roads.”

Touring the stretch of Highway 93 south of Arlee, members of the delegation snapped pictures and scribbled notes, observing the crossings that offer wildlife safe passage under and over the roadway.

Yerjan Khabshai, representing the Ministry of Roads and Transportation, said that while the terrain here is different from the Gobi Desert, the tour has helped showcase what’s possible in Mongolia before development begins.

“The biological diversity is different in our country than this area,” said Khabshai. “We’ll still learn a lot from the overpass and underpasses on this study tour. We have the opportunity to do this type of building at the same time we build our roads – not after. Learning this lesson is very important.”

The Mongolian steppe remains one of the largest expanses of grassland in the world. The Gobi Desert, one of the last great wildernesses on the planet, covers 500,000 square miles, reaching across southern Mongolia into China.

It’s an enormous landscape, spanning a region nearly four times that of Montana, and it’s largely intact. But Mongolia is a developing nation, rich in resources that range from copper to coal. It’s also rich in wildlife, with animals found nowhere else on the planet.

Kina Murphy, program manager in Mongolia for the Wildlife Conservation Society, said the vast Gobi Desert and eastern steppe are home to the rare Bactrian camel, the Gobi bear, the Goitered gazelle, the Saiga antelope and Asiatic ass, among others.

Many of the species are considered threatened or critically endangered. If development takes place with no mind to habitat, some fear, the species could be lost forever.

But Murphy believes that nation’s competing interests have a rare opportunity to come together and mitigate the impacts of development before they arise. The fact that members of the delegation have traveled together, landing halfway around the world to study Montana’s crossings, shows the sincerity of their efforts.

In fact, Murphy added, representatives from the Oyu Tolgoi mine joined the Ministry of Environment and Green Development in helping to fund the trip. The Trust for Mutual Understanding serves as a partnership that unites U.S. and world scientists.

“They’re here in a relaxed environment talking about how to put these crossings in before the problems arise,” said Murphy. “Our goal is to equip the ministries and private sectors of Mongolia with the capacity to make informed decisions about what they can do to mitigate the impacts of mining and other industries.”

A grizzly bear has ambled across the southern border of the Northern Continental Divide Ecosystem and onto Missoula’s urban fringe.

“It looks like she did it within a few days – looked out of the trees above Grant Creek, heard all the noise and saw all the stuff and didn’t come down,” said Chris Servheen, grizzly bear recovery coordinator for the U.S. Fish and Wildlife Service in Missoula. “That’s good. But there will be others.”

Researchers study Montana wildlife crossings for use on Chinese roads

EVARO - The People's Way, otherwise known as U.S. Highway 93 as it passes through the Flathead Indian Reservation, very much caters to critters, too, it appears.

When the large wildlife overpass north of here above the highway opened for its furry traffic, what appeared to be a bull moose was the first to christen it.

Whisper Camel's favorite photographs, however, taken by surveillance cameras, don't always come from the most visible of the 41 wildlife crossings between Evaro and Polson.

Marcel Huijser, a research ecologist with the Western Transportation Institute at Montana State University, discusses the engineering design of a U.S. Highway 93 wildlife underpass with government and mining officials from Mongolia on Monday.

A coyote pauses underneath the highway. Photo courtesy CSKT and MDT
© Copyright 2021 Missoulian, 500 S. Higgins Missoula, MT | Terms of Use | Privacy Policy
Powered by BLOX Content Management System from TownNews.com.
You don't have any notifications.