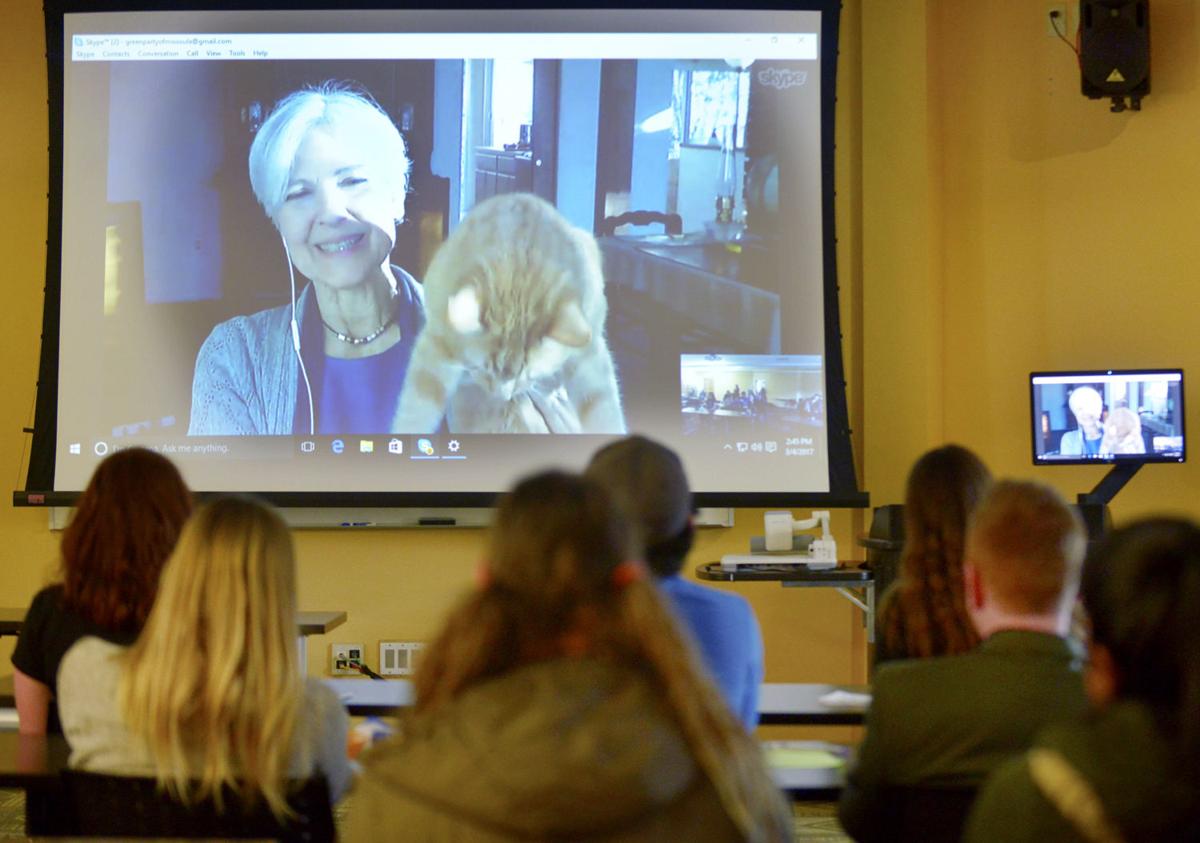 2012 and 2016 Green Party President nominee, Jill Stein, was a guest speaker via Skype for the Montana Green Party Convention held Saturday in the University of Montana's Native American Studies building. Stein's cat, Willy, also made frequent guest appearances during the Q&A. The last statewide convention was held in 2007. 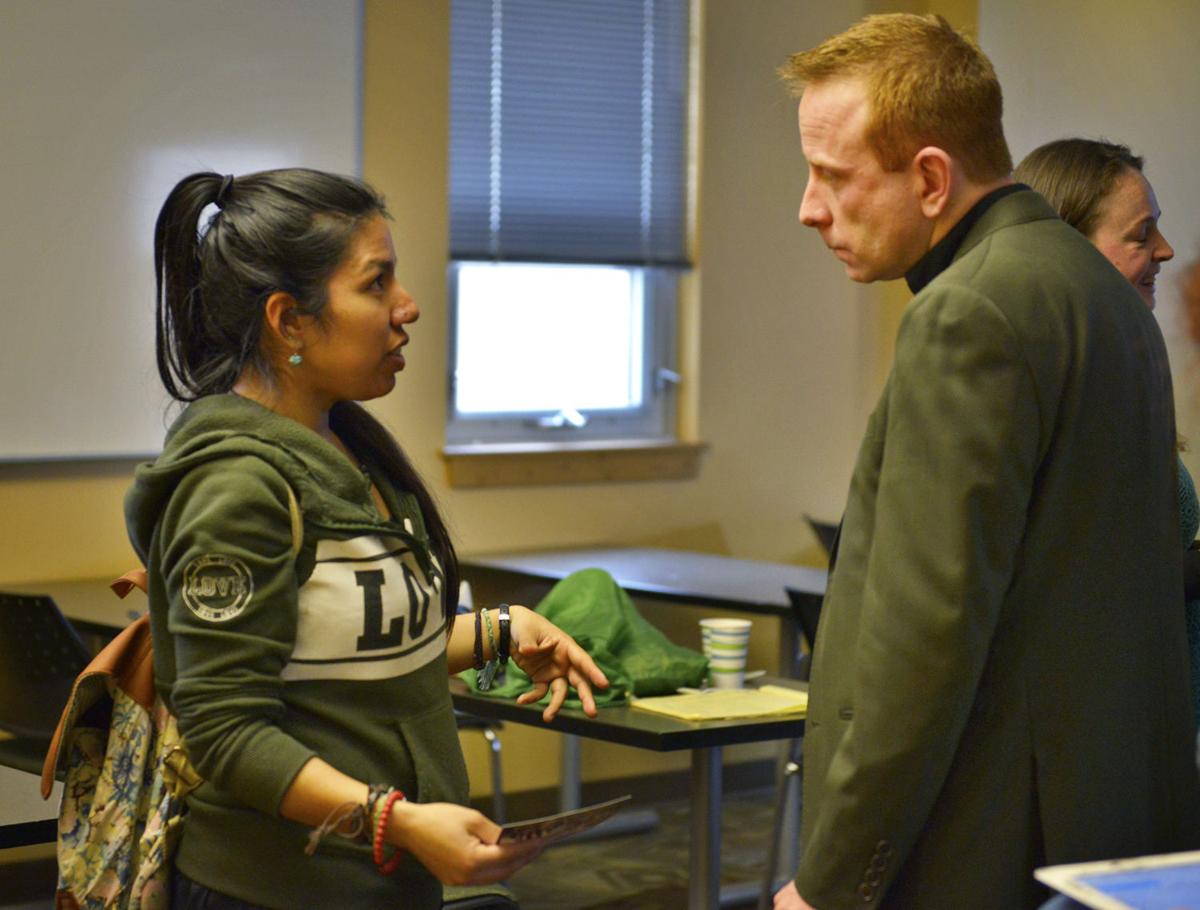 Leticia Romero, left, asks Montana's Green Party representative Thomas Breck to explain more about the political branch between the line-up of events for the 2017 Montana Green Party Convention. "I'm a single mother and wanted to learn more about what the Green Party has to offer," Romero said.

The all-day convention included an informational workshop on petitioning, speeches from local organizations and free breakfast and lunch, complete with gluten-free and vegetarian options. The event was part of a larger effort on the Green Party's behalf to work locally, according to party organizer Dani Breck.

"We've often been accused of only showing up for presidential elections," Breck said. "So we're trying to fix that. We're focusing on local."

The party's priority, Breck said, is getting a slot on the state's ballot for upcoming elections, including the at-large congressional district special election of 2017, in which a Montana representative will be elected to replace former Congressman Ryan Zinke.

Eight Democrats and seven Republicans are also vying for their parties' nomination in the special election to replace Zinke, and both parties will hold nomination conventions in Helena – the Democrats on Sunday and the Republicans Monday.

Ron Vandevender, chair of the Montana Libertarian Party, said it will pick its candidate for the special election at a convention in Helena Saturday.

"The goal of this convention is to give voters a choice," Wolfe said, "if they don't want to vote for a party controlled by corporate donors."

Jill Stein reiterated many of these thoughts when she addressed more than 20 members of the Montana Green Party via Skype Saturday afternoon, despite many attempts at distraction caused by Stein's adorably incessant cat, Willy, who pawed at Stein's face and even unplugged her headphones.

Stein said her introduction into the political world was through her own health activism. As she watched a new generation of children grow up with ailments that seemed nonexistent in the past, including specific cancers, learning disorders and asthma, Stein said she learned about the harmful effects mercury and pollution were having on our nation's children.

When Stein brought "win-win" solutions before her state's legislature – renewable energy and recycling plans, budget cuts to a bloated military – Stein said the politicians wouldn't even consider her measures. That was her "rude awakening."

"The whole political scene is a scam," Stein said. "We the people are silenced and talked out of our power."

Stein said the majority of Americans are unhappy with the nation's current political climate, and the presidential election of 2016 was only an illustration. Most supporters of President Donald Trump, Stein said, didn't see their votes as being for Trump, but rather votes against Hillary Clinton.

Stein said the American people don't need to be persuaded that the country's duopoly democracy has failed them. Instead, she said, they need viable solutions, starting with ranked choice voting. A ranked choice voting system allows voters to vote for multiple candidates in order of preference, and is legislation that can be passed on local and state levels.

In her closing sentiments, Stein gave the Montana Green Party words of encouragement.

"You can do this," Stein said. "You have everything it takes. In fact you have more, because you aren't slaves to the corporate system."

Of course, it was a ranked-choice voting system the Montana Green Party used to nominate Thomas Breck as the party's candidate for the 2017 special election. While the party has a slim chance at replacing Zinke – it would need to gather 5,000 signatures in the next four days just to get a spot on the ballot – a plan to sue the state of Montana on charges of unfair access to the ballot is in the works.

While the party essentially elected Breck as a plaintiff for the lawsuit, he pledged his allegiance to the Green Party's platform, saying it was his children who inspired him to make an effort to better the world.

Park officials have said reservations for June sold out within minutes after they were made available despite visitors having a rolling 60-day window to reserve tickets that are made available each morning.

Businesses can still elect to require customers wear masks in their facilities, but under the bill, local health requirements that they do so are no longer enforceable.

If you have $136 million to spend, you could own the Climbing Arrow Ranch near Bozeman, the setting for some of the scenes in the 1992 movie "A River Runs Through It."

'Beliefs, fear and anger': The roots of the Freemen still entrenched 25 years later

The third convicted Montana Freemen is living in Billings after spending the majority of the last 25 years of his life in prison.

Fire destroyed the iconic M&M Cigar Store in Uptown Butte early Friday morning, taking out the roof and leaving the rest of the building charred and gutted. Nobody was injured but the building was a compete loss.

Montana added 149 new cases of COVID-19 on Friday, and 12 more deaths due to the virus were confirmed.

Montana Legislature made lots of late changes, without public comment

"In all the four years I’ve been here I’ve never seen this many bills that have been dead somewhere else come back in conference committee jammed in bill that had nothing to do with them."

Montana added 167 new cases of COVID-19 on Tuesday, and one more death due to the virus.

Sights set on rebuilding M&M: 'It's going to take a series of small miracles'

There’s nothing left but piles of bricks and charred rubble where the M&M Cigar Store served as an anchor icon to Uptown Butte for 130 years.

2012 and 2016 Green Party President nominee, Jill Stein, was a guest speaker via Skype for the Montana Green Party Convention held Saturday in the University of Montana's Native American Studies building. Stein's cat, Willy, also made frequent guest appearances during the Q&A. The last statewide convention was held in 2007.

Leticia Romero, left, asks Montana's Green Party representative Thomas Breck to explain more about the political branch between the line-up of events for the 2017 Montana Green Party Convention. "I'm a single mother and wanted to learn more about what the Green Party has to offer," Romero said.