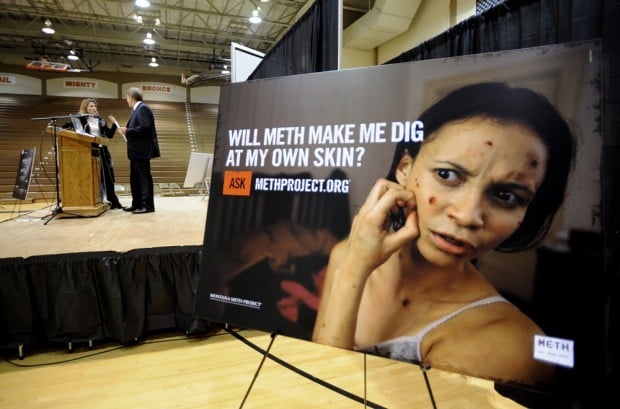 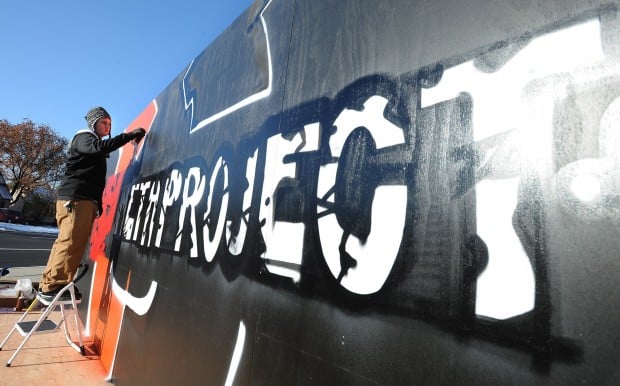 "We have the potential to impact teens everywhere," said U.S. Rep. Denny Rehberg, R-Mont., who attended the assembly.

With him were local community members and business leaders, including Mike Gulledge, publisher of the Billings Gazette and chairman of the Montana Meth Project.

The assembled students from Senior High and Billings Central Catholic High were the first in Montana to see the new ad campaign and website.

"It kind of scares you," Emily Ostermiller, a freshman from Senior High, said after the assembly.

"She was turned around like half the time," she said with a laugh.

Junior Kasey Chrisman agreed. He said the assembly was captivating and believed the message was effective.

"It's nothing we haven't heard before," he said. "But it was a good presentation."

Jennifer Stagnaro, executive director of Montana's national partner, the Meth Project, said she was impressed with the students at Tuesday's assembly.

"The kids engaged," she said. "They asked the good questions."

Central to the new campaign is MethProject.org - an online source of information about meth for teens - supported by new television, radio, print, online, mobile and social media campaigns.

MethProject.org is the culmination of six years of campaign development and research conducted with more than 50,000 teens and young adults, including 60 national and statewide surveys, and 112 focus groups.

"We have accomplished a great deal in our battle against meth," Gulledge said.

A web-centric social network built around the theme "Ask MethProject.org," the campaign challenges teens to consider what they know about meth, and equips them with facts, tools and resources to understand the risks of the drug and influence their peers.

The shift to digital media and social networking will allow teens to drive the conversation to other teens about the destructive impact of meth.

"We are really leveraging teens' own relationships with their peers to warn other teens about the dangers of meth," Rue said.

Montana Meth Project officials said the website will provide the multimedia experience teens expect in the digital world. Organized around getting answers, speaking out and taking action, MethProject.org will address teens' most frequently asked questions about the physical, mental and social effects of meth use, they said.

Each question - more than 350 in all - is answered with a range of interactive facts, videos, animations, image galleries, polls, quizzes, personal stories from users, their friends and family, and firsthand accounts from experts.

MethProject.org will also serve as a platform for teens to connect and share, officials said.

In the "Speak Up" section of the site, teens can post their own messages about meth through artwork, videos, stories and photos, as well as comment on other teen submissions. "Take Action" provides ways for teens to get involved to prevent meth use or find help, and showcases teen-led community action programs across the country.

The Meth Project is also expanding its presence on Facebook, YouTube and Twitter. A new national Meth Project Facebook page will build upon its network of more than 27,000 fans across the Meth Project's individual state pages.

It will also expand on the Meth Project's previous campaigns with the launch of a dedicated Meth Project YouTube channel.

"The Meth Project has been remarkably effective in reducing meth use through its research-based prevention campaigns," Dr. Kevin Kunz, a physician and president of the American Board of Addiction Medicine, said in the release. "The data clearly demonstrates that if teens understand the risks of meth use, they will make better informed decisions, and usage declines."

The Meth Project said Tuesday its ads challenge teens to question their knowledge and beliefs about the drug, asking, "What do you know about meth?"

The television spots - directed by Academy Award-nominee Darren Aronofsky, director of "Black Swan" and "The Wrestler" - show teens reflecting upon the questions they might have asked before ever trying the drug as the harsh reality of their life on meth unfolds.

The television, radio, print and mobile campaigns will run in Arizona, Colorado, Georgia, Hawaii, Idaho, Illinois, Montana and Wyoming - reaching 90 percent of teens - and are available nationally via Facebook, YouTube and at MethProject.org.