Become a Member
Read Today's E-edition
Share This
Montana's rich, tragic past is focus of new book
0 Comments
Share this
1 of 2 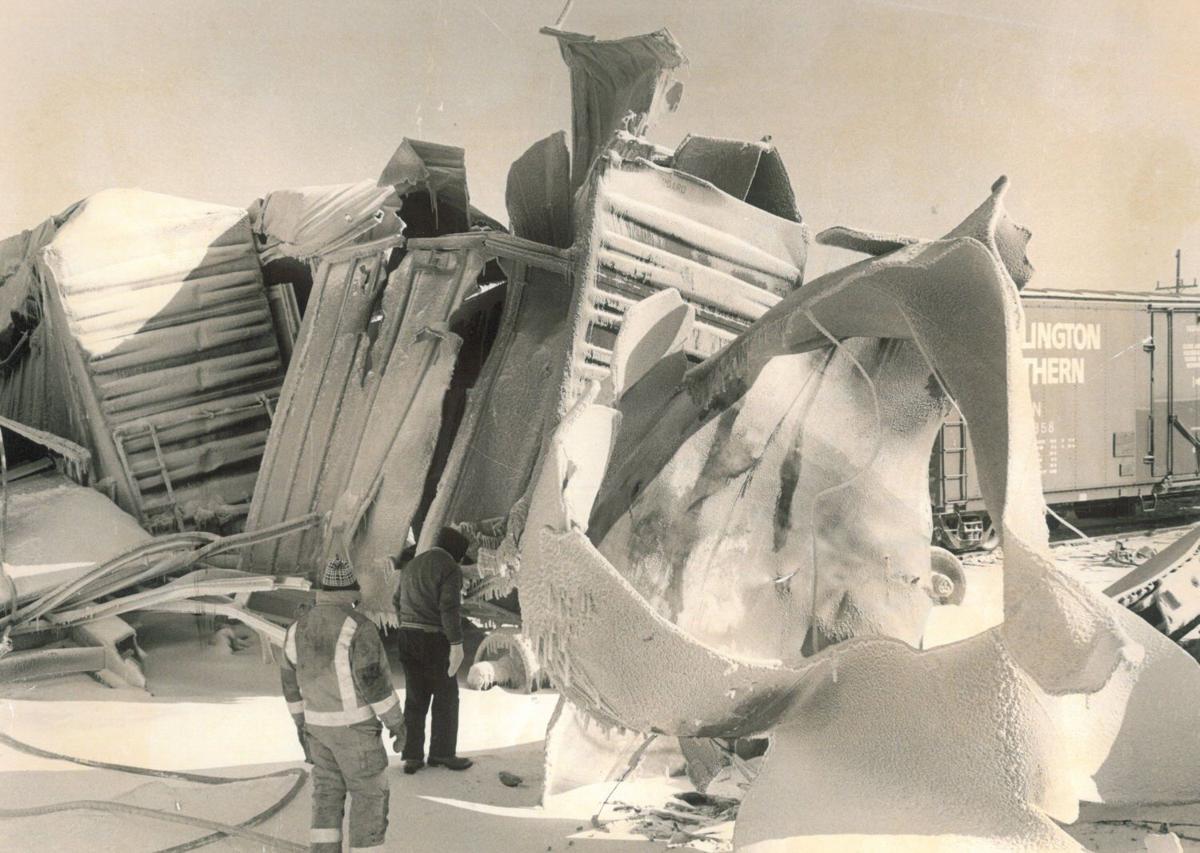 A worker inspects damage after 49 runaway train cars came barreling down MacDonald Pass at an estimated 35-40 miles per hour and crashed into another train just outside Guadalupe Hall at Carroll College in 1989. 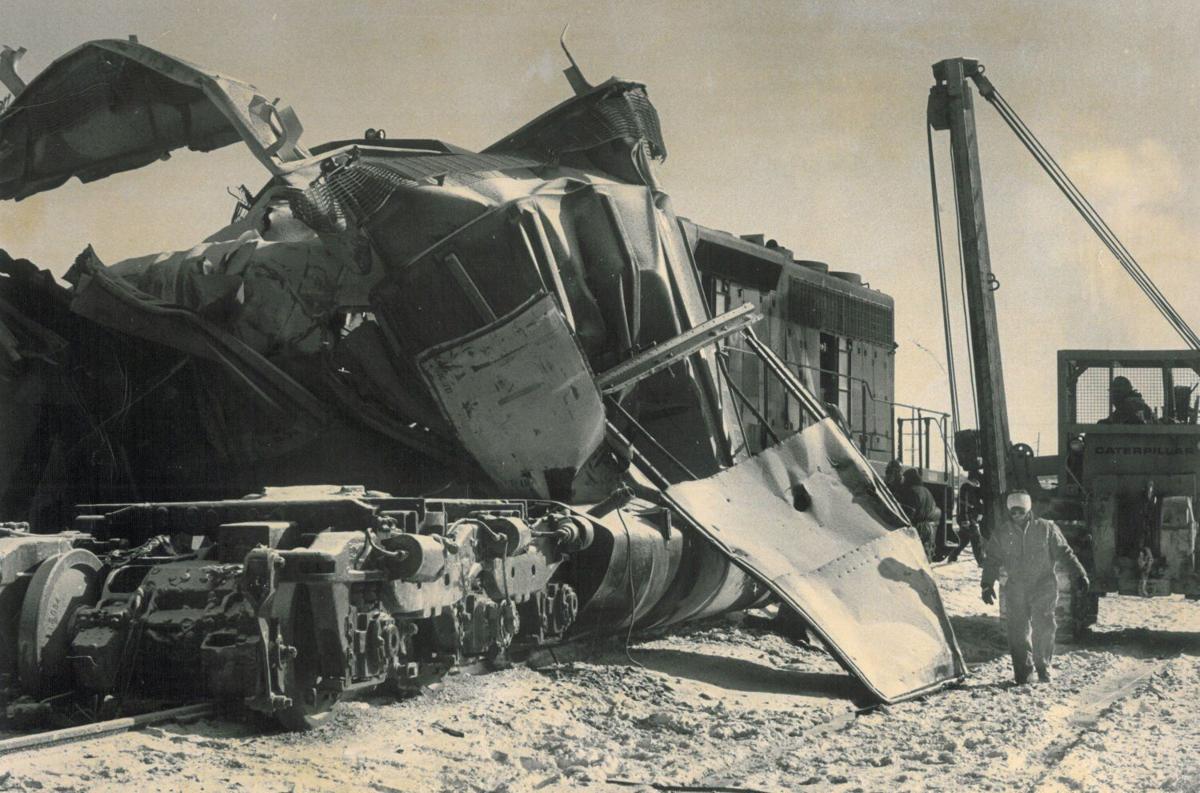 Icicle-laden bent and twisted metal was all that remained of a train after it exploded near Carroll College in 1989.

There are moments from James “Butch” Larcombe’s childhood that planted the seed for a book that would blossom decades later.

He remembers as a child traveling from Phillips County to visit his grandparents in the Flathead and riding through a portion of Montana where something dramatic had happened to the landscape.

He asked his mother what had happened. She told him there had been a flood.

And then there was the picture that hung in his dad’s office at the Phillips County News in Malta. It was of a man at a podium giving a speech. Larcombe asked his father, the newspaper publisher, about the photo, and was told it was Donald Nutter, a governor who had been killed in a plane crash in 1962.

Years later, Larcombe used some of those childhood memories as he wrote his book “Montana Disasters: True stories of the Treasure State tragedies and triumphs,” which is out now, published by Farcountry Press and sells for $18.95 at bookstores throughout Montana, at the Montana Historical Society and online.

The book is divided into sections, each with several chapters. Sections include train wrecks, wildfires, explosions and fires, mine disasters, dam failures, floods, avalanches, earthquakes, diseases and airplane crashes.

Tragedies include the 1938 Custer Creek train wreck, the wild fires of 1910, the Mann Gulch fire of 1949 that killed 12 smokejumpers and one forest service recreation guide, the Eureka Hotel fire of 1950, train explosions in Belt in 1976 and near Carroll College in Helena in 1989 and the Granite Mountain mine disaster of 1917.

It is by no means a book on the worst disasters, which the 65-year-old Larcombe said would be ghoulish.

“I looked for a strong human component,” he said.

“The reason it motivated me, and this sounds gloomy, is that all of these events are worth remembering,” he said, adding that some incidents showed redemptive human behavior where people used that behavior to move ahead with their lives.

Larcombe noted some the disasters have common elements. The 1917 Butte disaster and Smith Mine disaster in Red Lodge in 1943 both occurred in wartime, and workers were encouraged to produce material as quickly as they could. And in that process safety concerns were overlooked.

The 264-page book features more than two-dozen Montana tragedies in a blend of modern-day research, interviews and previous reporting.

“I liked it very much,” said Ken Robison, a historian, author and board member with the Montana Historical Society. “I thought his selection was very good. It’s not encyclopedic but it is not intended to be.”

Robison said the research for the book was “excellent” and that Larcombe shows his skill from his years as a journalist.

He said Larcombe “embedded” a special touch with each story, especially the ones with actual interviews and remembrances.

“He emphasized the personal story, and made it a leap above over the disasters themselves,” Robison said.

Robison witnessed one of the tragedies firsthand that Larcombe wrote about in his book. He, his mother and sister were among the 20,000 people in the grandstand at the Montana State Fair in 1946 when the Douglas A-26 Invaders collided during the air show.

“It was a sad, memorable day for all three of us,” he said.

Six people died, 25 were injured and 19 racehorses were killed when one of the crashing aircraft hit the horse barn.

Robison said the tragedy was magnified by the fact the 1946 Hudson they were traveling in that day was smacked by a taxi on Central Avenue. The car did not have a back seat and Robison, who was 7 at the time, had a half-eaten hamburger he planned to finish later. Not only was the car damaged in the crash with the taxi, but Robison said his burger had gone AWOL.

Larcombe said he believes the Nutter story is undertold, and little is written about it other than newspaper accounts.

He said he had to get a copy of the 1962 crash report from the U.S. Air Force, which investigated it at the time.

Larcombe said he believed the investigation was pretty cursory and did not say why the wing of plane broke off. He described it as “skimpy compared to other reports” and fueled his belief it was a misunderstood and underreported story.

He said government bureaucracy slowed the pace of the book. He said the most frustrating experience of writing the book was working with the National Park Service on the 1969 incident on Mount Cleveland, where five hikers died. Larcombe said it took nine to 10 months for the government to release the information.

He said the government redacted the names in its report of the people who died in the 1962 plane crash that also killed Gov. Nutter, even though the information was public knowledge.

“It’s bureaucratic nonsense, in my opinion,” Larcombe said, adding he filed five to six open records requests as he researched the book.

Larcombe, who grew up in a newspaper family, has a long history of being a journalist in Montana.

He worked for the Missoulian in the Flathead Valley, spent 18 years at the Great Falls Tribune and moved to Helena when he took a job as editor with Montana magazine and eventually also became the managing editor of the Helena Independent Record. He also worked as a corporate communications specialist for NorthWestern Energy for six years before retiring.

And he said in retirement he has been able to pursue writing projects such as this book.

He said he worked on the book 18 months and tried to follow a work regime, in which he would spend about six hours a day, Monday through Friday, on the book.

He said he does not have plans for a part II on disasters, but is mulling a book on mysterious episodes in Montana history.

Larcombe will speak at 4:30 p.m. Jan. 13 at the Montana Historical Society, 225 N. Roberts St., Helena. He will talk about “Montana Disasters” and a previous book, “Golden Kilowatts,” the history of Montana’s hydraulic dams. He will be available to autograph books.

What: James “Butch” Larcombe will discuss his books, “Montana Disasters” and “Golden Kilowatts"

Yacht squeezes under bridge with less than 5 inches of clearance

A worker inspects damage after 49 runaway train cars came barreling down MacDonald Pass at an estimated 35-40 miles per hour and crashed into another train just outside Guadalupe Hall at Carroll College in 1989. 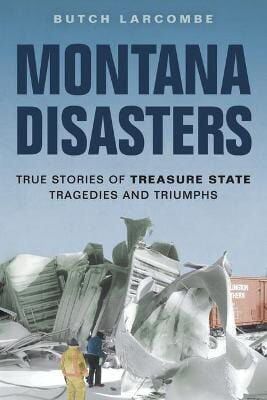 This book is on sale at bookstores throughout the state, at the Montana Historical Society in Helena and online. 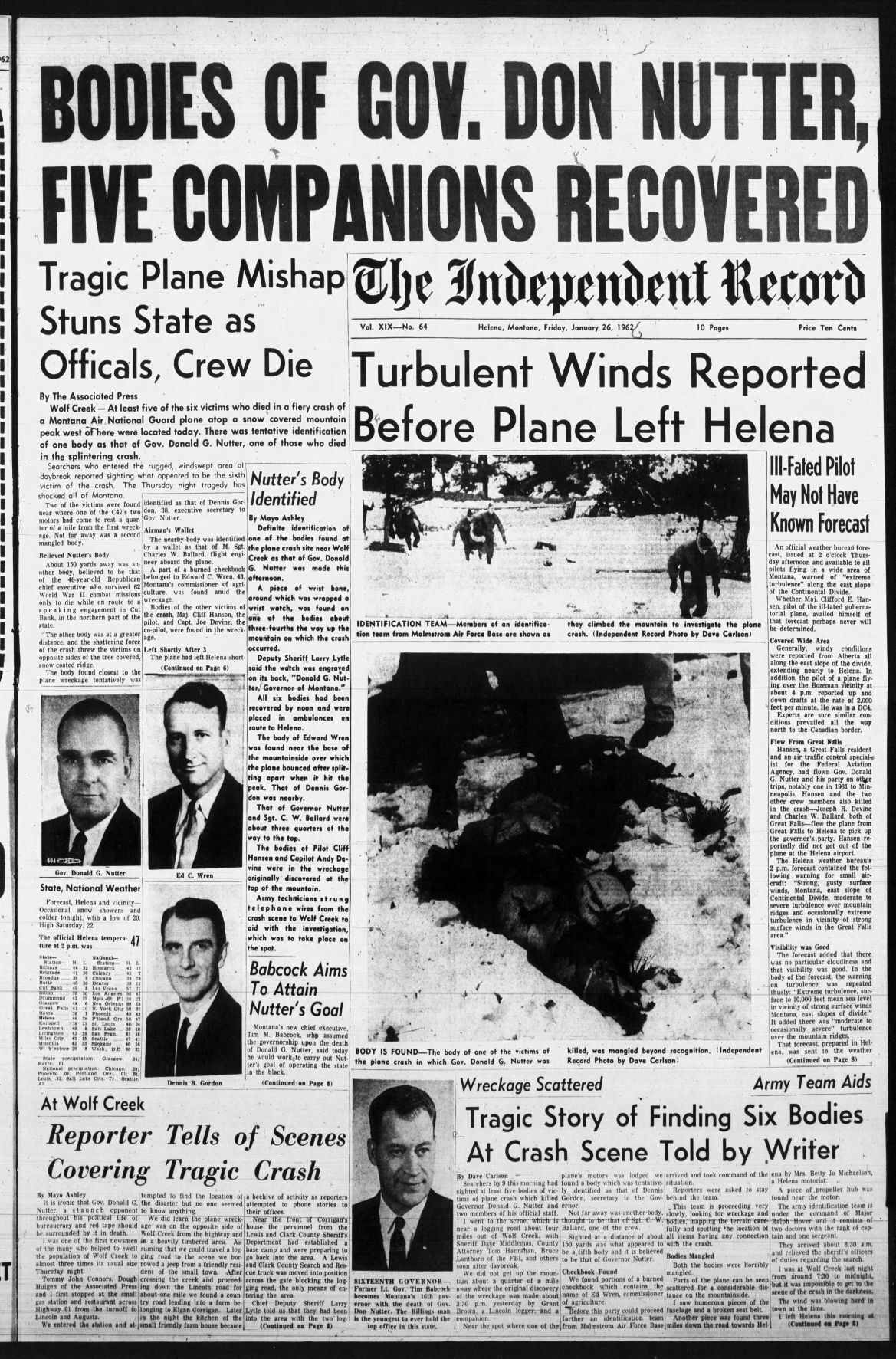 A front page from the Helena Independent Record of one of Montana's darkest days. 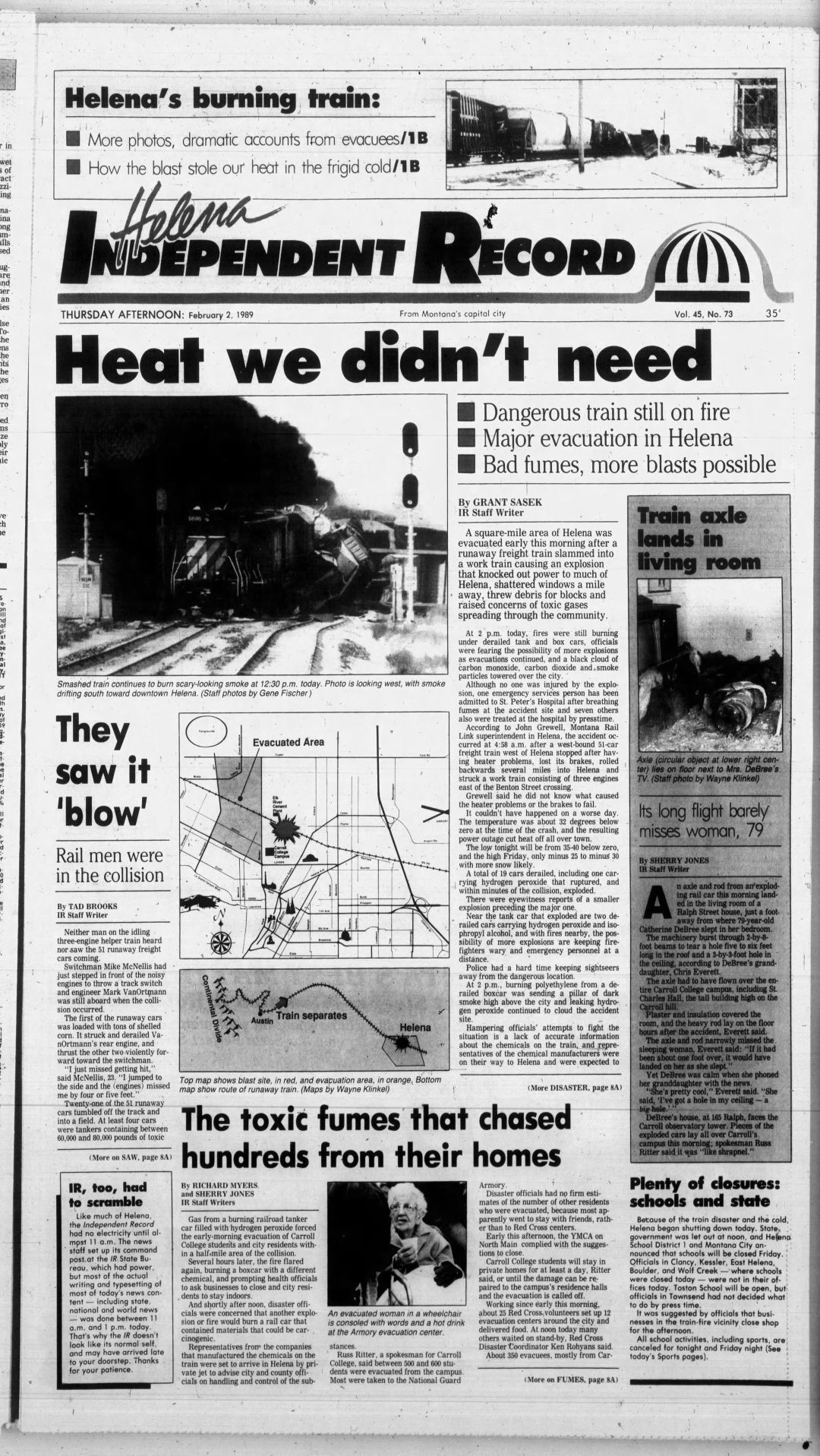 Coverage of the 1989 train crash near Carroll College in Helena. 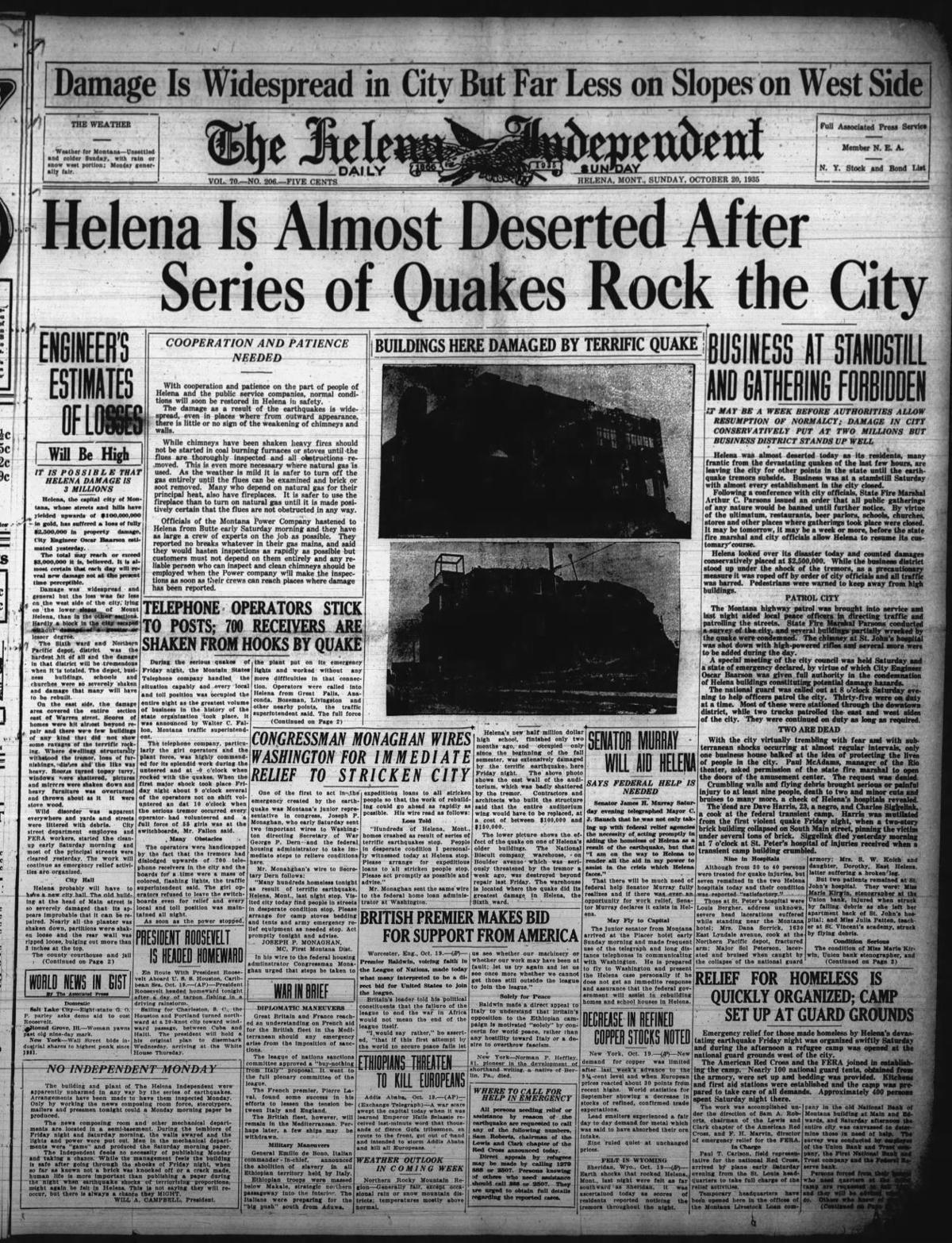 Earthquakes are among the topics covered in the book.

Icicle-laden bent and twisted metal was all that remained of a train after it exploded near Carroll College in 1989. 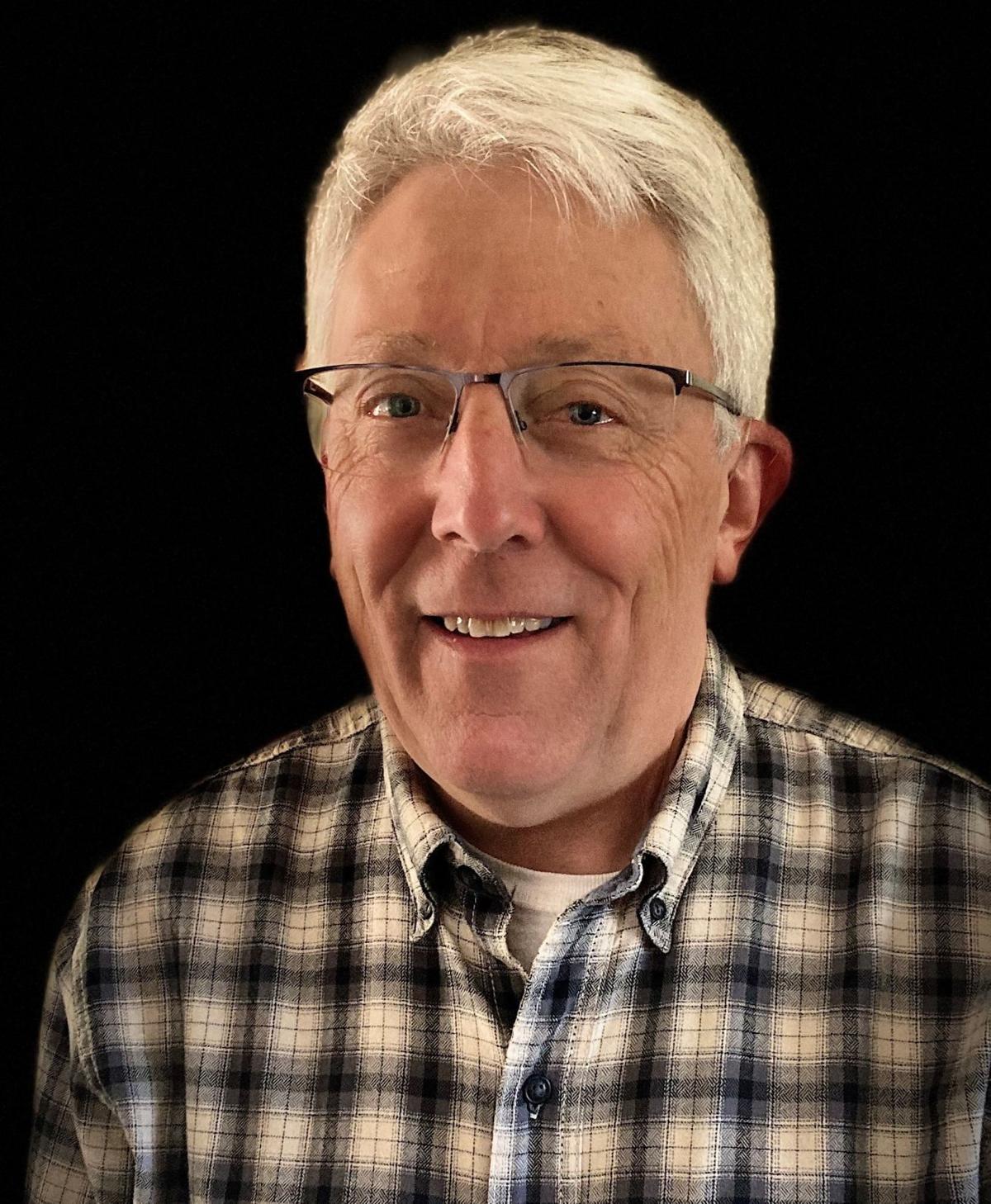