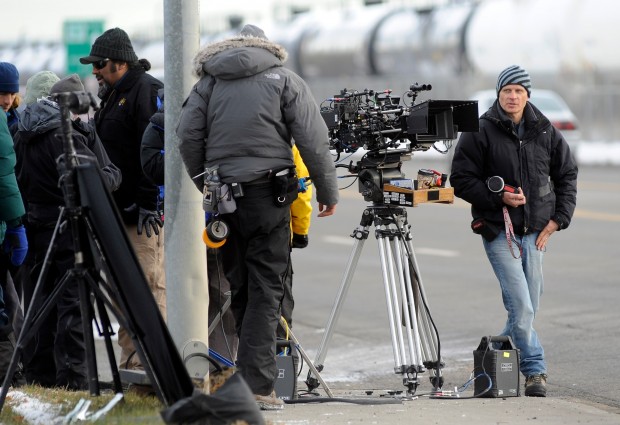 A film crew sets up on the 3700 block of Montana Avenue on Tuesday morning to shoot a scene for "Nebraska." 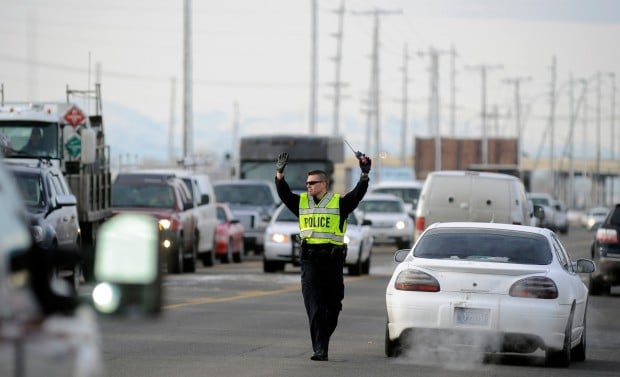 A policeman directs traffic on the 3700 block of Montana Avenue on Tuesday morning as a film crew shoots a scene for the film "Nebraska." 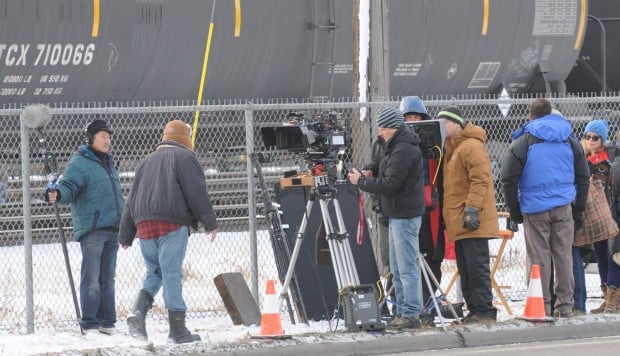 A movie crew shoot a scene on the 3700 block of Montana Ave. Tuesday morning for part of the "Nebraska" movie being filmed in Billings.

Ask Deny Staggs, location coordinator and co-manager of the Montana Film Office, what it's like when a major studio film production sweeps into a smaller town for filming and he's got a ready answer.

"We look at it as a mobile manufacturing company," he said. "It comes in and does its work and spends money in the community before moving on. But there's not a ton of infrastructure needed. It really just brings in the money and then goes when its done."

If that's the case, then the manufacturing company is in Billings as the cast and crew of Alexander Payne's "Nebraska," starring Bruce Dern and Will Forte, are in town through the end of the month shooting part of the film, likely to be released in 2013.

Payne, best-known for his films "Sideways", "The Descendants" and "About Schmidt" brought more than 100 members of the production team to Billings beginning late last week. Dern and Forte portray a father and his estranged son traveling from Billings to Nebraska to claim a sweepstakes prize.

While they could be seen shooting throughout Tuesday on Montana Avenue, local officials said the impact of having the crew — and its budget — around could be felt in Billings for the rest of the year.

"We really do recognize the economic and social benefits that it brings to residents of Billings," said Alex Tyson, executive director of the Billings Chamber of Commerce/Convention and Visitors Bureau. "This time of year, aside from holiday shopping, can be a little bit quiet. They've filled a hotel, and they're filling our streets, our stores and our restaurants, and having the ability to accommodate that is important to us."

The Montana Film Office and the Billings chamber have been working with the production team for about a year.

Those efforts include scouting shoot locations — about a half-dozen in the Billings area — renting out property, finding lodging and hiring locals for everything from being extras to catering, electrician and accounting duties.

"It's a proven fact that the impact of productions in the state is extreme," Staggs said. "The trickle-down is really, really immense. Far more immense than people would think."

While an exact number isn't available for "Nebraska," he said a "typical studio feature" can drop as much as $1 million during a weeklong shoot.

"The more days they're around, the more dollars they'll need and the more services they'll need, and that will come into the community," he said.

Most of the services come from local residents and businesses, from electrical work to traffic control.

Staggs estimated that the shoot required the hiring of 50 to 100 locals.

"We've got businesses that are bending over backwards to help them out," Tyson said. "These are all things that help immensely economically and they're utilizing Billings businesses."

Anne Gauer, co-owner of Billings production company Spotlight Productions, was initially hired as a location scout but is now an assistant location manager and will travel to Wyoming for more filming next week.

She helped technical staff go through dozens of homes and locations to find what Payne needed and helped coordinate renting the properties from the owners, who receive compensation and sometimes a stipend.

"I have been so pleased with how open the people of Billings have been," she said. "Pretty much every business I've gone to, they've done everything with open arms and I think that's going to bring a lot to our economy."

Staggs credited Payne with deciding to film specific scenes in Billings instead of setting up in a studio elsewhere.

Montana also offers an incentive to film productions through the Big Sky on the Big Screen Act, enacted by the Montana Legislature in 2005.

Lawmakers set it up to entice out-of-state productions to film in Montana.

"Look at it as similar to a big-box store coming and the city providing them with tax incentives to come in," Staggs said.

Money isn't the only thing the production of "Nebraska" could bring.

Locals still point to the Billings filming of the 1992 Ron Howard blockbuster "Far and Away" starring Tom Cruise and Nicole Kidman, a 1991 made-for-television movie about Lt. Col. George Custer called "Son of the Morning Star," or even the lesser-known 1993 kid flick "Josh and S.A.M." as points of pride.

"It's a moment in time for us," Tyson said. "It's fun on the social aspect of things and you take pride in your community when you can host folks like this."

On the production side, Staggs and Gauer said that Payne's approach to the filming and working with the community will help greatly along those lines.

Gauer said Payne and other film staff have been great in their interactions with the public, even going so far as to ensure pets on the properties where they're filming are taken care of, learning the pets' names along the way.

"It's been really cool to see how caring they are," she said. "They're coming here and doing all this work and they've been so gracious and nice."

Staggs said the portions of the film, set in modern times and shot in black and white, aim to show Billings in a realistic light and will show "major environmental structure and character," especially the Rimrocks.

The Montana Film Office plans to get the word out.

"We put a lot of merit on that cultural impact, that pride in showing Montana to the world," he said. "It's going to show Billings as a smaller, Western industrial town and we're going to be telling people about it and promoting it."

An accurate portrayal of the town from an award-winning writer-director such as Payne in a widely released movie could do much more than line locals' pockets, Staggs said.

"The economic impact is great, but the cultural and Montana value of having something like this filmed in your backyard will be felt long after those dollar signs fade away," he said.

A film crew sets up on the 3700 block of Montana Avenue on Tuesday morning to shoot a scene for "Nebraska."

A policeman directs traffic on the 3700 block of Montana Avenue on Tuesday morning as a film crew shoots a scene for the film "Nebraska."

A movie crew shoot a scene on the 3700 block of Montana Ave. Tuesday morning for part of the "Nebraska" movie being filmed in Billings.