A black bear looks down from a mudroom shelf he managed to take a nap on after letting himself in the Butler Creek residence. It was the first call of the day for responding law enforcement of the Missoula County Sheriff's Office.

A black bear was tranquilized after letting himself into a residence in Butler Creek and taking a nap on a mudroom shelf. 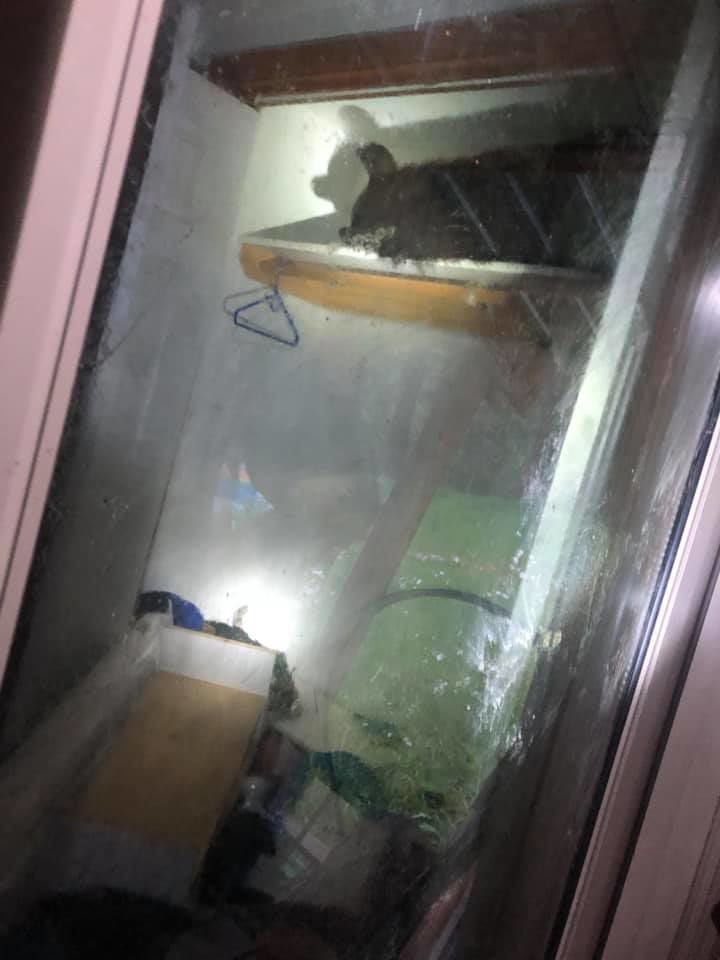 A black bear was tranquilized and relocated Friday after letting himself into a Butler Creek residence, making himself at home, and giving law enforcement a chuckle.

The bear had somehow gotten into the house’s mudroom and locked himself inside, according to the Missoula County Sheriff’s Office. Deputies responded to the call at 5:45 a.m.

“The door had been ajar,” said Jamie Jonkel, wildlife management specialist with Montana Fish, Wildlife and Parks. “He must have tested it and stepped inside.

“It wasn’t a full-fledged break in.”

A Facebook post from the Sheriff’s Office said the bear “began ripping the room apart,” once it realized it couldn’t get out. The bear eventually gave up trying to force his way out and climbed onto the top shelf of a closet to fall asleep.

It was the first call of the day for Cpl. Zach Sargent and Deputy Andrew Beatty of the Sheriff's Office. The family had been woken up by the racket downstairs and called 911, Beatty said in an interview.

They had given the responding deputies a pretty clear picture of what was going on, but even so, Sargent looked in the mudroom window toward the ground, thinking the bear would still be digging through trash or hiding underneath something.

“When we first walked up and saw him in the closet, we just started laughing,” Sargent said.

The two tried to rouse the bear and eventually got the door open to try and draw him out.

“I was assuming the bear would just come running out of there,” Beatty said. “He just went back to bed.”

“He would look at us and yawn,” Sargent added. “Never did anything aggressive toward us.”

At that point, the officers settled in to wait for the bear to either wander out the door or for Fish, Wildlife and Parks to arrive with tranquilizers. FWP showed up first and ended up tranquilizing and relocating the bear.

Jonkel characterized the bear as a “typical young male,” around three years old and about 70 pounds. He said the bear was relocated to the foothills of the Mission Mountains northeast of Missoula.

“He was just starting out on his own,” Jonkel said, adding there were reports of a bear eating dandelions and grass in yards recently in Butler Creek.

“We’ve had a ton of activity in Grant Creek and Butler Creek,” he said, as well as in Seeley Lake, West Riverside, Bonner and Clinton.

Bear activity is common this time of year, Jonkel said, as bears come looking for nice green grass or clovers to munch on, and are easily attracted by bird feeders, dog food or trash.

It’s the homeowner’s responsibility to remove those attractants.

“We will not put traps on top of bird feeders or uncontained garbage,” he said. “If the bear comes back once everything is clean, then we will set a trap.”

This house, however, was clean, Jonkel said. But the open door was enough.

The Sheriff’s Office wrapped up its Facebook post with a reminder for homeowners to lock their doors, while commenters focused on the quality of shelf that would hold a bear.

“Let's all give props where it's due — that shelf builder needs a raise,” Nick McAtee wrote.

Bear in the closet

University of Montana releases administrator a year from retirement

The contract for Terry Berkhouse, the executive director of Academic Enrichment, was not renewed. He had just one year until his retirement.

A U.S. congressional candidate from Missoula plans to build eight to 10 three-story, high-end townhomes in downtown Missoula near the Clark Fo…

Summer off to chilly start

A man has been arrested after allegedly brandishing a gun outside the First Interstate Bank branch on Reserve Street.

Three people died in a two-vehicle collision Monday on U.S. 93 north of Missoula.

A grizzly and a black bear died during the past week after encounters with humans.

A black bear looks down from a mudroom shelf he managed to take a nap on after letting himself in the Butler Creek residence. It was the first call of the day for responding law enforcement of the Missoula County Sheriff's Office.

A black bear was tranquilized after letting himself into a residence in Butler Creek and taking a nap on a mudroom shelf.