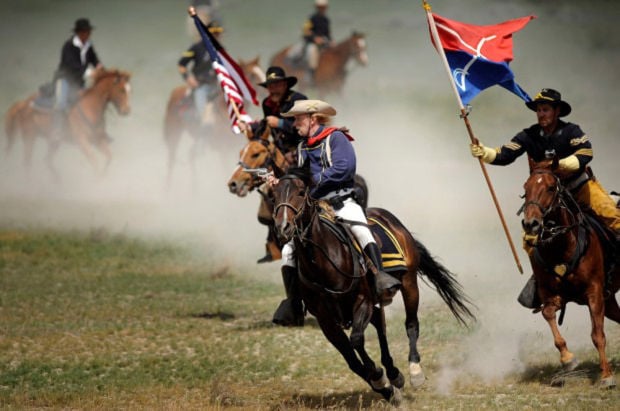 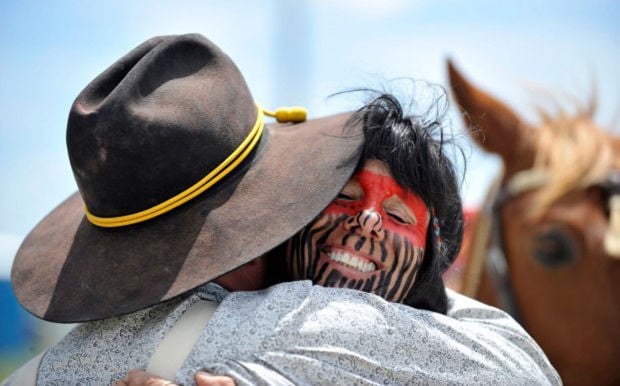 Not to spoil the ending for those who have yet to experience a re-enactment of the Battle of the Little Bighorn, but Lt. Col. George Armstrong Custer dies, along with many 7th Cavalry soldiers.

Crazy Horse and Sitting Bull are victorious, along with the other Lakota, Cheyenne and Arapaho warriors.

That’s the way it happened at the Custer’s Last Stand Re-enactment on Friday afternoon sponsored by the Hardin Chamber of Commerce and Agriculture. It was the first of three performances presented about six miles outside Hardin. It will be repeated Saturday and Sunday at 2 p.m.

A separate re-enactment also takes place on the Real Bird Ranch, outside Garryowen, south of Crow Agency, Saturday and Sunday at 1 p.m.

Why do so many people come to see the famous battle re-enacted each year?

“In Europe, Custer is the biggest thing that ever happened,” he said before the start of the re-enactment Friday afternoon. “European people like the American West.“

He added another reason.

“Of course, this is the most important Indian battle that was ever fought,” he said.

This year’s event drew the largest number of re-enactors, Sargent said – between 250 and 300 people, the majority coming from local towns.

Of course, in the actual battle, thousands of warriors battled hundreds of soldiers. More than 250 soldiers and scouts died.

It was also the last big victory for the Indians, who, for the most part, were forced onto reservations within a year after the battle.

The script for the Hardin performance is based on an outline written by Dr. Joe Medicine Crow, a historian and elder of the Crow tribe. The grandson of White Man Runs Him, a Crow scout for Custer, Medicine Crow, now almost 100, learned about the battle firsthand and based his outline on that information.

Before the battle on June 25, 1876, Sitting Bull, a medicine man and leader of the Hunkpapa band of the Lakota Sioux, had a vision of the soldiers’ defeat.

Crazy Horse, a Lakota warrior, led the band of Indians that encircled and then killed Custer and his soldiers.

On Friday, hundreds of people sat in the stands for the hourlong event. Temperatures in the mid-70s made it a perfect day to take in the outdoor performance.

During the performance, a trio of narrators took the audience through a brief history of the Plains Indians, up through the 19th century.

To one side of the large grassy stage, Indian women and their children played in and around five canvas tepees, as action played out around them.

From the arrival of Lewis and Clark to the encroachment by settlers, the homeland of the Indians shrunk, and the main source of food, the bison, slowly disappeared.

In another scene, Indian leaders met with the “Great White Father” to reach accords, only to see them broken repeatedly.

Eventually, the growing tension leads to the battle that shocked a nation and gave Indians their short-lived victory.

Soldiers on horseback on a ridge a distance from the stand descend down into the valley, and the battle is on. Warriors cry out, both sides shoot guns, dust flies and the soldiers fall to the ground, dead.

Afterward, the audience enjoyed meeting the re-enactors and getting photos taken with them.

Brian Clayton came from Cincinnati, Ohio, with his wife, Tami, and children, Annael, 12, and William, 10, to see the re-enactment. A social studies teacher, Clayton said he wanted his kids to see history close up.

“I like how they showed respect for both sides,” he said.

Leaf Picchetti, who came from Bend, Ore., with her husband, John, said they’d heard about the re-enactment and decided to come see it.

“My husband is a bit of a history buff and it’s the old wild West,” she said.

Asked why she thought the battle still draws people, she had her own idea.

“Maybe it’s because it’s when the Indians won,” she said.

Rick Williams, a re-enactor from Middletown, Ohio, who played Custer at the Hardin re-enactment for the seventh year, has his own thoughts on the controversial historical figure.

“I think regardless of all the politics or all the discussion of how everything happened, he was regarded then and, I think, still, in many corners, as one of the last American heroes who died fighting against overwhelming odds to further what they felt were the aims of the government,” he said.

Custer, who had an up-and-down career, almost missed going to the Battle of the Little Bighorn because he got into trouble with President Ulysses S. Grant, Williams said.

And despite the fact that Custer had gotten intelligence that he would face a far bigger number of warriors than he originally thought, he pressed on with the battle.

“He had just gotten out of trouble, so I believe he was intent on having another great victory to get back on top,” Williams said.

That none of the soldiers Custer fought with survived the battle may be the biggest reason interest in the battle has thrived for more than 125 years.

“It all comes down to the controversy of the man in command and the fact that of his final battle, there were no white survivors,” Williams said. “So this huge cloud of mystery hangs and will continue to hang over this man.”