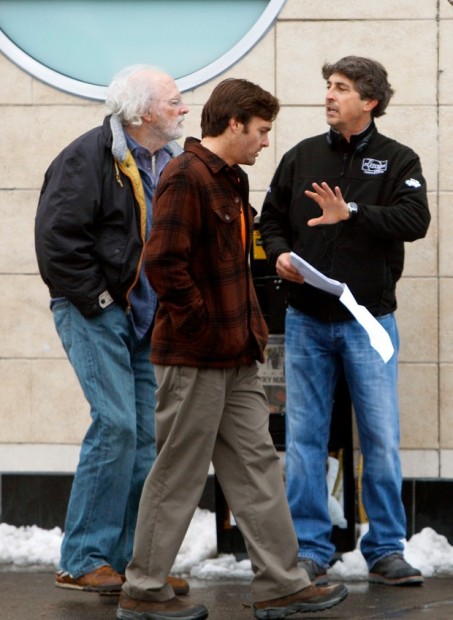 "Nebraska" director Alexander Payne, right, talks with the film's stars, Bruce Dern, left, and Will Forte, as they shoot at the bus depot on First Avenue North on Thursday. 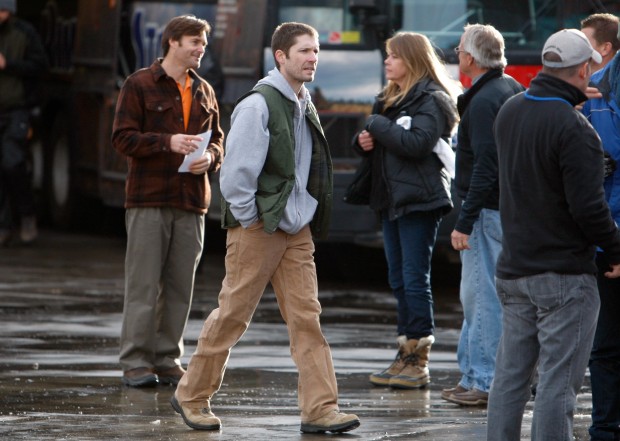 Local actor Jayme Green walks through the movie set during the filming of "Nebraska" in downtown Billings on Thursday. 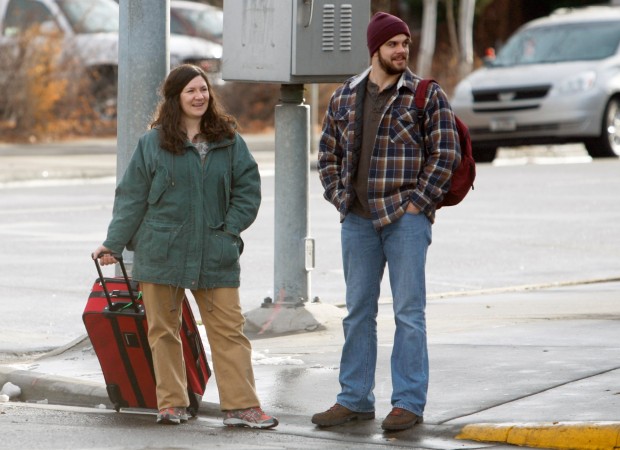 Locals Carissa Klarich, left, and Dakota Karlsson wait for their cue as they work as extras in "Nebraska" during filming in downtown Billings on Thursday. 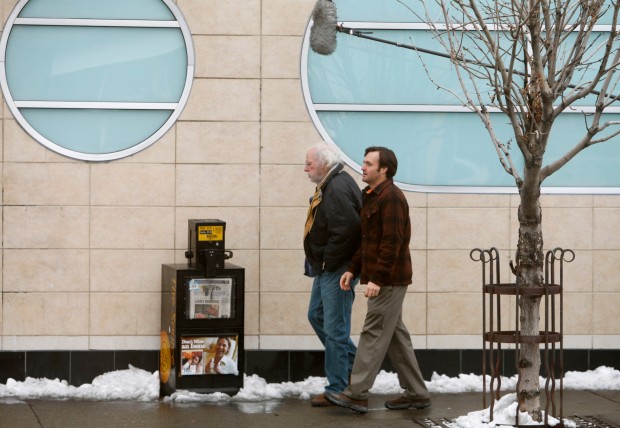 "Nebraska" stars Bruce Dern, left, and Will Forte film a scene at the bus depot on First Avenue North on Thursday. 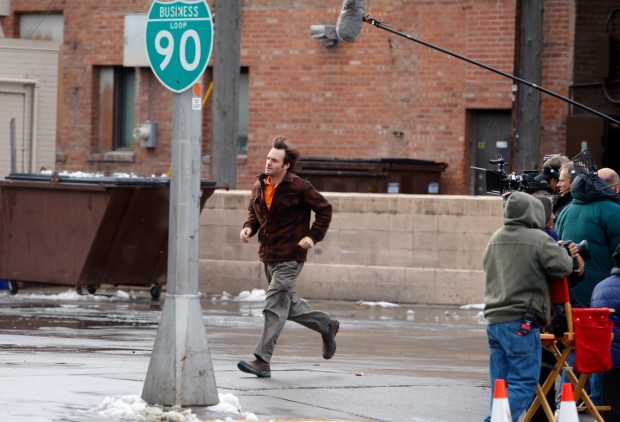 Actor Will Forte films a scene for "Nebraska" in downtown Billings on Thursday. 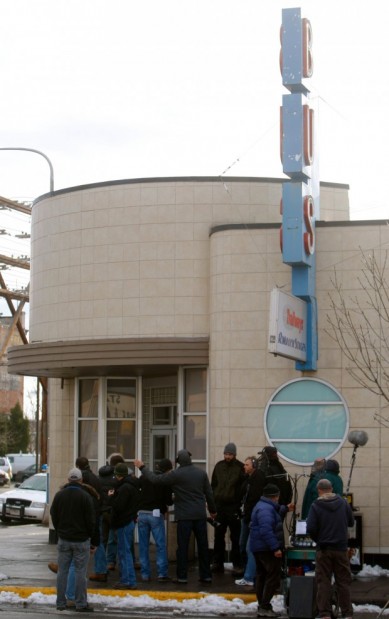 A crew films a scene for "Nebraska" at the bus depot in downtown Billings on Thursday.

Hannah Shine, a guard for the Central Washington University women’s basketball team, and her teammates stood on First Avenue on Thursday trying to get actor Will Forte’s attention.

With their cellphones pointed at Forte, zooming in to get a picture, someone in the group hollered “Will” to make him look. Forte is starring in Alexander Payne’s film “Nebraska,” part of which is being shot this week in Billings. He did look up and smile at the women, who were in town to play Montana State University Billings.

In the film, which should be released in November or December 2013, Dern plays a down-and-out father to Forte’s character. Dern’s hair is long and frizzy and dyed white for the part. He shuffled back and forth on the sidewalk, often beside Forte and Payne, the Academy Award-winning director who is filming “Nebraska.”

Mostly the locals went about their business during the closed-set shoot outside the bus station. Cars drove by along First Avenue, with only a few heads turned to see what was going on.

Gail Briant, an on-set scene coordinator from New Orleans, kept pedestrians from walking into the set.

“Alexander Payne is so nice to work for. He’s charming. He remembers everyone’s name. He has that skill,” Briant said.

Several local actors worked as extras during the week. Jayme Green, a veteran Billings stage actor who is certified in fight choreography, was originally tapped to be a body double for Forte. Then Forte’s usual double flew in from L.A. to do the shoot, and Green was kept on as a driver and an extra on the film.

Capt. Dennis McCave, of the Yellowstone County Detention Facility, played a sheriff’s deputy for a shoot earlier in the week. He wore an old deputy uniform that had been altered so it didn’t resemble Yellowstone County’s current uniforms.

“Basically I sat at the camp for three hours, waiting for them to get done on Montana Avenue. Then, my deal was the second shoot. I go over to the 27th Street interchange, waited for an hour, then all these people showed up,” McCave said.

McCave got some screen time in the 1992 film “Far and Away,” including the bar scene with Tom Cruise, which was shot at the Billings Depot. He learned the rules of being on the set.

“I knew not to engage a main actor. In ‘Far and Away’ if you did, you were escorted off the set.”

“Nebraska” is based on a screenplay written about 10 years ago by South Dakota native Bob Nelson. Producer Albert Berger, who is in Billings for the filming, said Payne was interested in the script because it was a moving, funny story, yet it also has a darkness to it.

“Bob Nelson said he looked at a map and thought, ‘What city would be a good place to start a road trip to get to Omaha, Neb.?’” Berger said. “He picked Billings.”

Filmmakers spent months shooting in Nebraska before coming to Billings this week. Payne likes his films to be authentic to the script, so if the script says the film begins in Billings, that’s what he’ll do, Berger said.

“We’re happy to be here and have a location that hasn’t been overused,” Berger said.

Dern’s character believes he has won a Publishers Clearing House sweepstakes prize of $1 million and is headed to Nebraska to pick up his winnings. He reconnects with his son and the two make the trip together. Along the way to Nebraska, father and son run into relatives and friends, some of whom the father owes money to. When he tells them he just won a million bucks, some of his friends ask for repayment for loans they made to him.

It is being shot in black-and-white, which Berger believes will give it a timeless, iconic look.

“Alexander is really the best filmmaker out there. This show will be raw and funny, and if you’re familiar with Payne’s work, it will have that darkness just below the surface,” Berger said.

The film crew will travel next to Buffalo, Wyo., and Rapid City, S.D., to continue filming the road trip. Berger said Payne wanted to film Billings in the winter so he waited until late November to come here. The Rims, the railroad tracks, the 27th Street interchange, KTVQ TV, and the Trailways Bus Station, should all be in the film, Berger said.

“About a year from now you can expect to see it, maybe a Christmas movie,” Berger said. “You know his films do well at the Academy Awards.”

For the sixth time since the exchange was established, 28 Yellowstone National Park bison were shipped to the Assiniboine and Sioux Tribes of the Fort Peck Indian Reservation on Wednesday.

How many black holes are in the universe?

How many black holes are in the universe?

"Nebraska" director Alexander Payne, right, talks with the film's stars, Bruce Dern, left, and Will Forte, as they shoot at the bus depot on First Avenue North on Thursday.

Local actor Jayme Green walks through the movie set during the filming of "Nebraska" in downtown Billings on Thursday.

Locals Carissa Klarich, left, and Dakota Karlsson wait for their cue as they work as extras in "Nebraska" during filming in downtown Billings on Thursday.

"Nebraska" stars Bruce Dern, left, and Will Forte film a scene at the bus depot on First Avenue North on Thursday.

Actor Will Forte films a scene for "Nebraska" in downtown Billings on Thursday.

A crew films a scene for "Nebraska" at the bus depot in downtown Billings on Thursday.