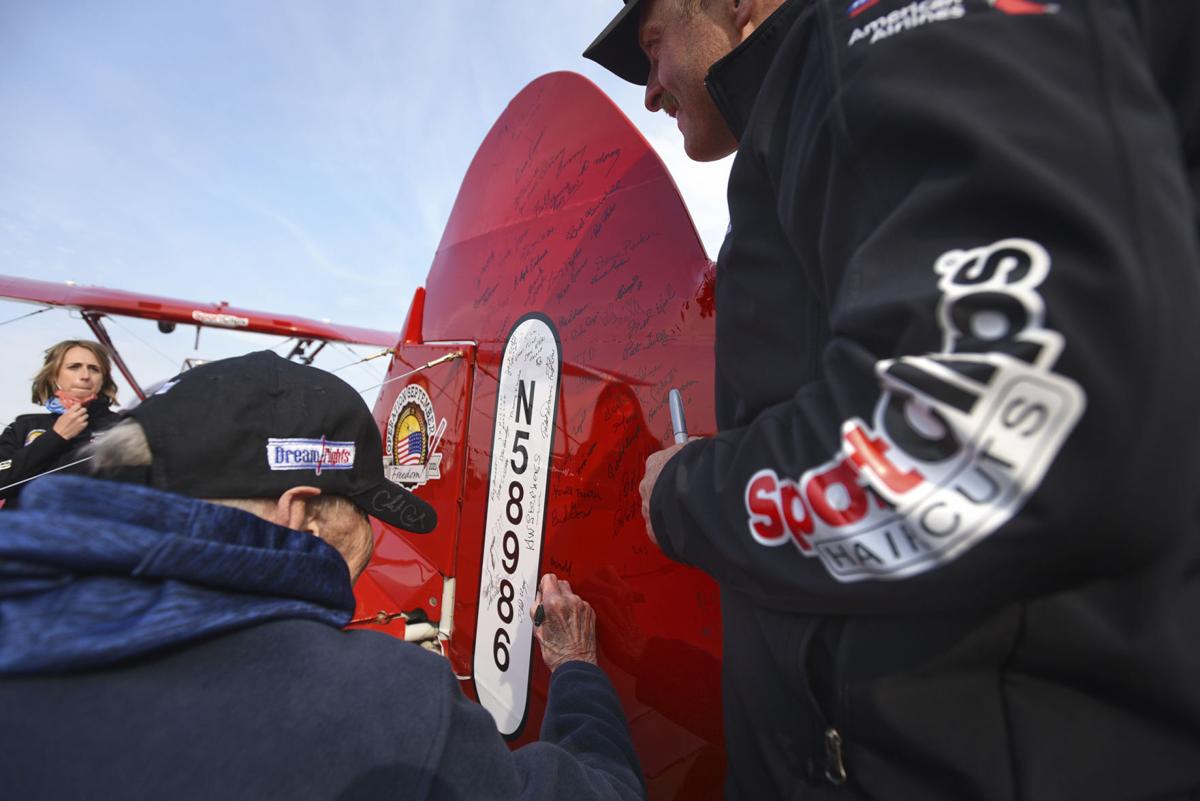 Arnold Peterson, a 99-year-old Navy veteran, adds his signature to the dozens of others from World War II veterans who have received a flight in a Boeing-Stearman Model 75 biplane as part of nonprofit Dream Flights' Operation September Freedom. Dream Flights gave flights to three veterans at Glacier International Airport on Thursday, Aug. 26. 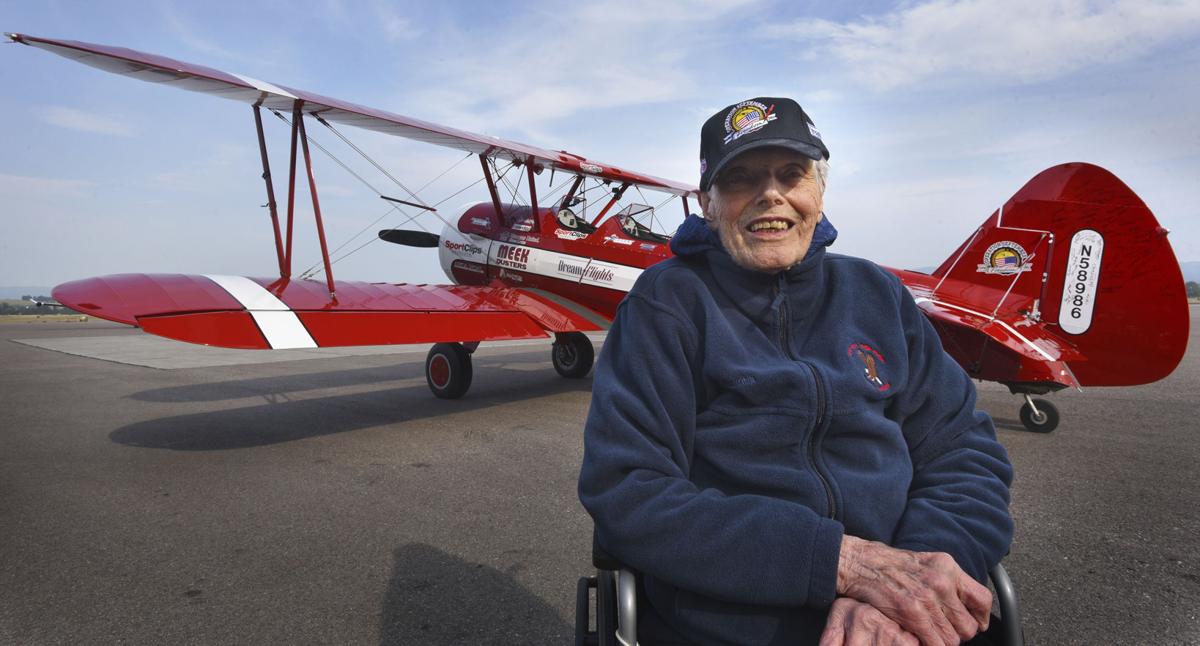 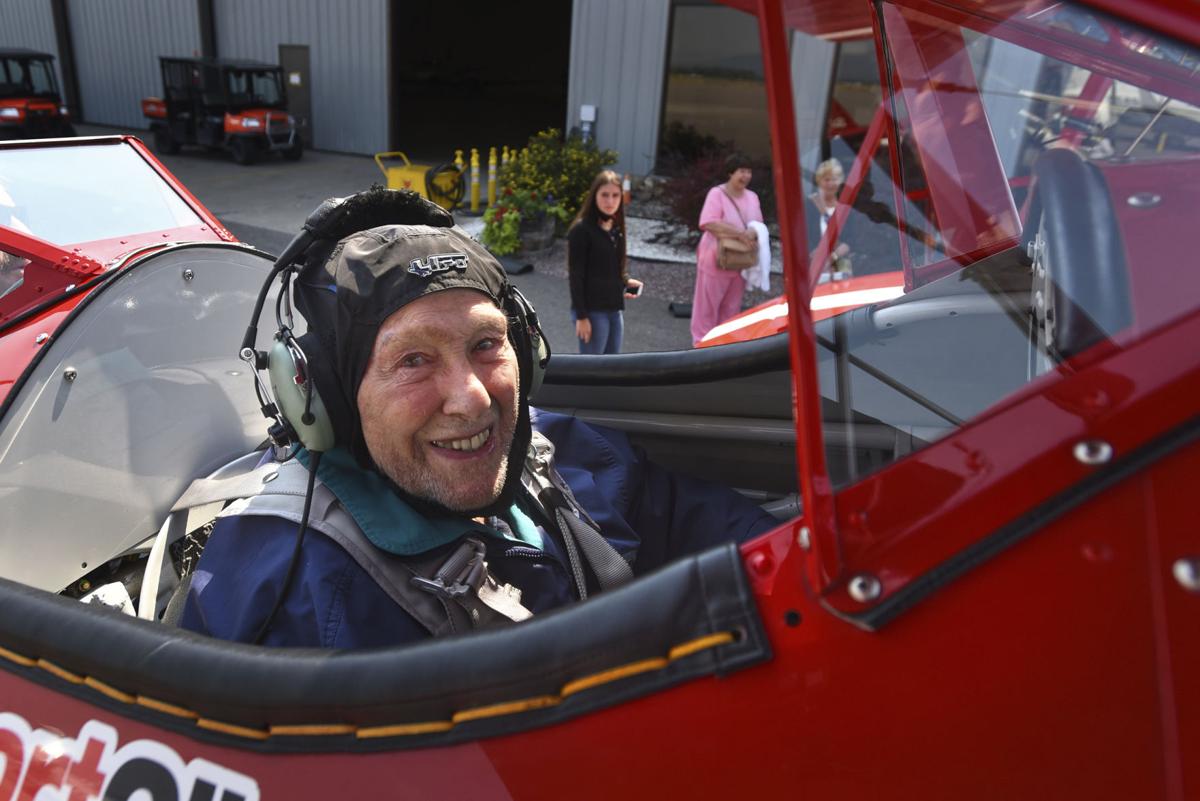 Kenneth Schrammeck, 98, beams from the front seat of a Boeing-Stearman Model 75 biplane at Glacier International Airport on Thursday, Aug. 26. 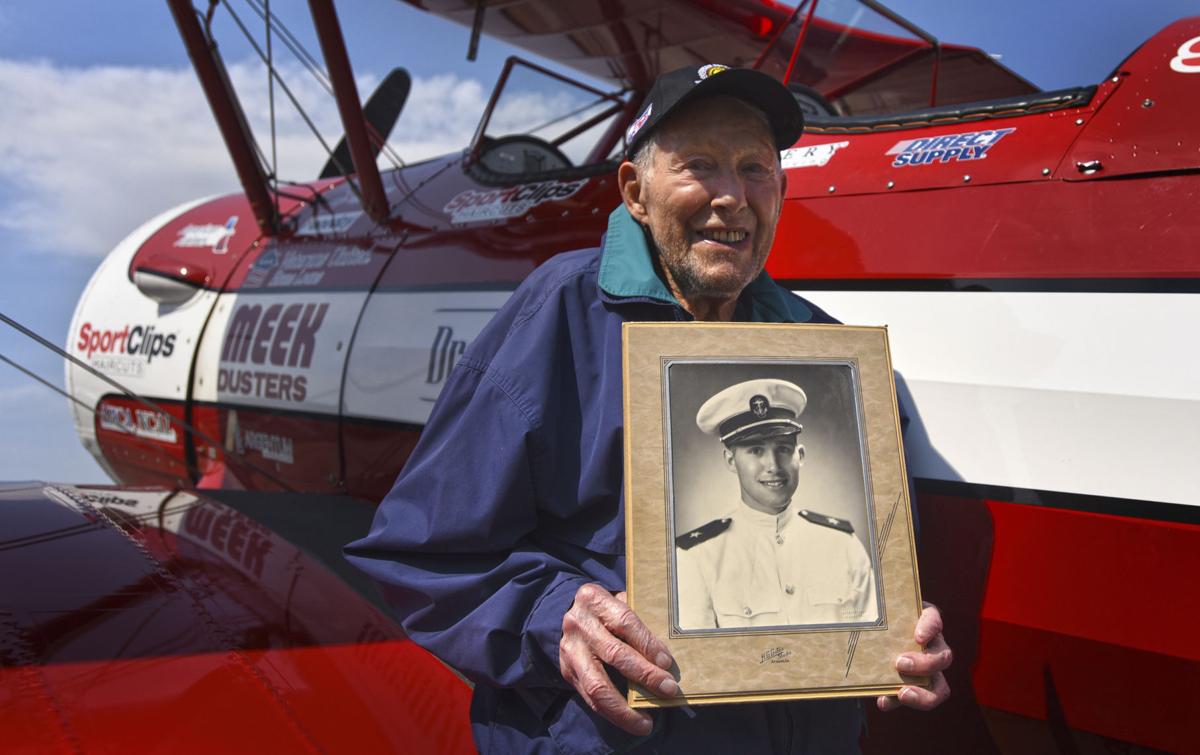 Kenneth Schrammeck, 98, took to the skies for a flight in a Boeing-Stearman Model 75 biplane at Glacier International Airport for the first time since training in one as a Navy aviator during World War II.

KALISPELL — Navy veteran Kenneth Schrammeck was beaming recently as he slipped into the front seat of a Boeing-Stearman Model 75 biplane just outside the Jet Center at Glacier International Airport.

At 98 ½ years old, the former Navy aviator never dreamed he would once again take to the air in the same model of plane he had trained in during the height of World War II, much less in the instructor's position in the front seat. Schrammeck's smile had grown even larger by the time he joined his family back on the ground after his 10-minute flight.

"It felt strange being in the front seat this time around, but it was fun, very fun," he told the Daily Inter Lake. "It was fun, but not as much fun as that first solo flight was all those years ago. The biggest thrill is when that front seat is empty and you are doing your solo flights. That was when flying really became a thrilling experience."

Schrammeck's flight, along with two others in Kalispell on on Aug. 26 and one in Ronan, were made possible by the nonprofit Dream Flights and its Operation September Freedom, which is offering free flights in its fleet of Boeing-Stearman Model 75 biplanes through the end of next month to honor the 80th anniversary of the attack on Pearl Harbor and the 76th anniversary of the Japanese surrender, which marked the end of WWII.

"The debt that we as a country and a society owe to that generation that allowed us to have the freedoms and liberties we have today can never be paid," said Dream Flights pilot Clint Cawley, whose grandparents served in WWII. "They are such a humble and gracious generation, and this is the least I can do to give back and try to make a day special for them. Every day in my life is special because of what they did and what they sacrificed."

Cawley, who served as the pilot for the flights in Kalispell, said he was honored to bring joy to the lives of America's WWII veterans by giving them flights in such an iconic plane.

"All of the pilots in World War II trained in a Stearman. Everybody flew a Stearman, whether they went on to fly a bomber or a fighter or whatever. All military pilots started with a Stearman," Cawley said.

According to Dream Flights, of the 16 million Americans who served in WWII, only an estimated 100,000 remain alive in 2021, with the youngest being 95.

"So in 2021, we're dedicating our entire Dream Flight Tour to WWII veterans," the organization says on its website. "Our mission is to honor as many as possible, thanking them for fighting for freedom."

Schrammeck said his flight took him back to his training days at a small teachers college in Arkansas in what he and his fellow naval aviator trainees called the "Yellow Peril" due to the biplane's bright yellow paint scheme.

Schrammeck said he enjoyed his training, including getting into trouble a few times.

"One thing I remember clearly, which was against the rules, was flying in the clouds," he said. "They really didn't like it when we did that with the trainers."

Schrammeck completed his flight training, but just when he thought he would be shipped off for combat, he received a letter from the War Department.

"They sent a letter out to us at the end of training saying that their losses were way less than they planned and that my class was being abolished. Just like that," he said. "They told us we could become a noncombatant if we wished, but we were not going to become pilots."

Undaunted, Schrammeck took a discharge from the Navy and looked for another way to join the war effort.

"Some of the wise guys told me that the Army was enlisting pilots, but they were wrong," he said. "It was the same story as the Navy."

Fellow Navy veteran Arnold Peterson, who took the first flight of the day, did see combat in the Pacific Theater as a chief electronics technician about the destroyer USS Healy, reaching the rank of chief petty officer.

From 1943 to 1945, Peterson and the USS Healy saw action in the Marshall Islands, Saipan, Guam and more, including the Battle of the Philippine Sea.

On Sept. 2, 1945, the Healy served as the harbor control vessel that led the battleship USS Missouri into Tokyo Bay for the Japanese formal surrender, which ended WWII.

Nearly 75 years later, Peterson took to the air for his first flight in a biplane.

"I was looking to see how many bumps we were going to hit, but we didn't have any bumps today," he said of the experience. "I really enjoyed being able to look out and see the valley below. At my age, I couldn't believe I was flying again, but I really enjoyed it."

A grandmother’s campaign plants over a million trees in Mexico

Montana is on pace for 2021 to soon eclipse the number of COVID-19 deaths it suffered in 2020, a year vaccines weren't available.

“We are the hottest spot and Yellowstone County is leading with the number of cases in the state,” said Public Health Officer John Felton at a Tuesday County Commissioner meeting.

Idaho bowhunter Raymond Jones went missing on his son's 12th birthday, Sept. 7, 1968. Fifty-three years later, Jones' body was found by another bowhunter, solving a mystery that had long haunted his relatives, including his only son.

3 Montana school districts go virtual or close due to COVID

No public school classes will be held statewide on Thursday and Friday due to the annual educator conferences.

The unanimous vote by the council belied what one of the developers of the revisions said was the unfortunate politicization of a non-regulatory, aspirational document.

The bears had not gotten into any conflicts before reports came in the last few days that they entered the dumpsite operated by Park County through an open gate near Chico Hot Springs.

Two Republicans and three Democrats have so far announced their candidacies for the yet-to-be-drawn district.

Arnold Peterson, a 99-year-old Navy veteran, adds his signature to the dozens of others from World War II veterans who have received a flight in a Boeing-Stearman Model 75 biplane as part of nonprofit Dream Flights' Operation September Freedom. Dream Flights gave flights to three veterans at Glacier International Airport on Thursday, Aug. 26.

Kenneth Schrammeck, 98, beams from the front seat of a Boeing-Stearman Model 75 biplane at Glacier International Airport on Thursday, Aug. 26.

Kenneth Schrammeck, 98, took to the skies for a flight in a Boeing-Stearman Model 75 biplane at Glacier International Airport for the first time since training in one as a Navy aviator during World War II.