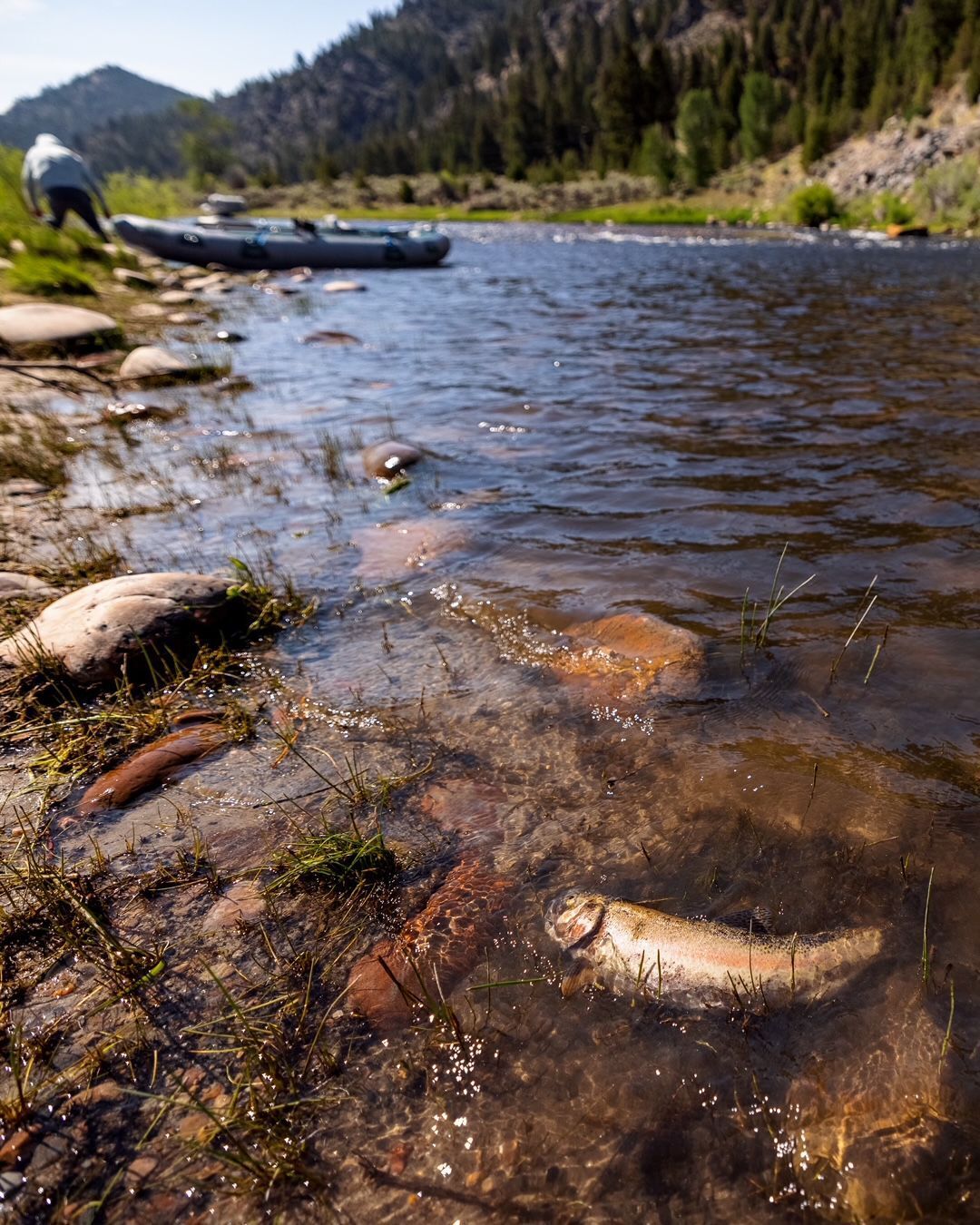 A dead trout floats at the edge of the Big Hole River near Dickie Bridge on June 23. The water temperature was 73 degrees. 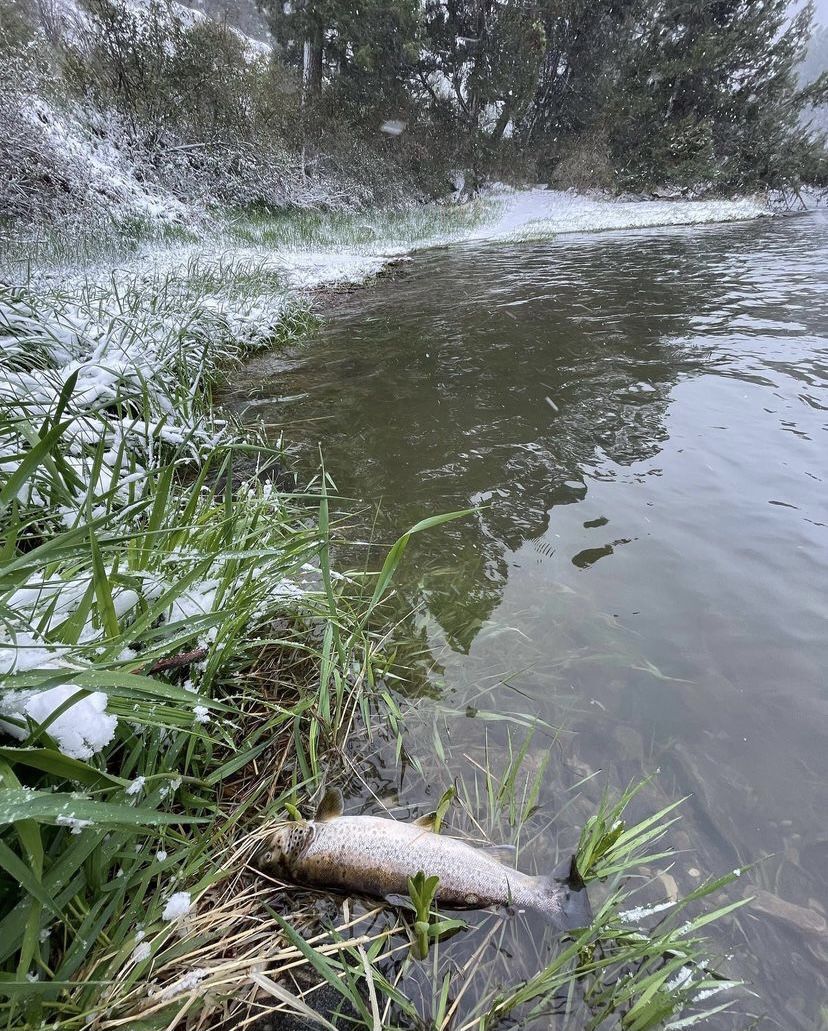 A dead brown trout washes up on the lower Madison River, found by the Upper Missouri Waterkeeper conservation group during an unexplained fish kill on May 20. 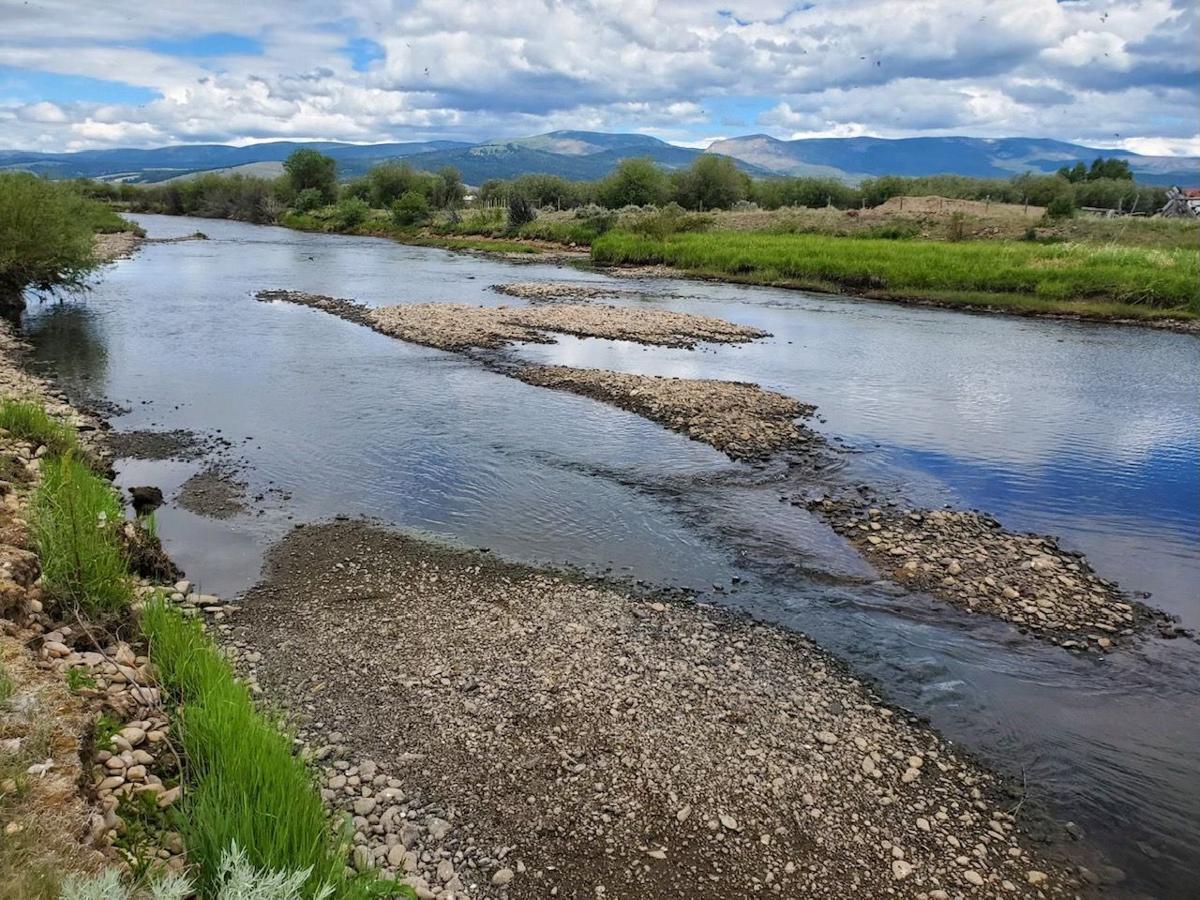 The Big Hole River trickles by at a mere 24 cubic feet per second near Wisdom on June 20.

The trout decline in southwest Montana rivers was startling even before the drought hit.

Now the region’s rivers are trickling and boiling through the summer, and a coalition of conservation, retail and outfitter groups on Wednesday sent a letter to Gov. Greg Gianforte urging a major response.

“Clean and healthy rivers and vibrant, wild fisheries are part of our unique way of life. They are also critical to Montana’s outdoor economy, which accounts for $7.1 billion in consumer spending and supports more than 71,000 jobs. If water quality in our rivers continues to decline, and our rivers themselves dry up, these negative changes will also tank our state’s robust outdoor economy that directly depends upon vibrant cold-water fisheries,” the coalition said in its letter.

The coalition includes the Upper Missouri Waterkeeper and other conservation groups, retailers Orvis and Patagonia, the Fishing Outfitters Association of Montana, fishing shops and guides.

The group is calling for a cross-government, multi-agency cold-water fisheries task force made of key state and federal agencies as well as representatives from local government, watershed groups and the conservation community.

The fish problem is well documented.

Brown trout numbers are at record lows in sections of the Big Hole River, a model free-flow stream where watershed committees have set the standard for drought management. The species is also in steep decline in the Yellowstone, Madison, Missouri, Ruby, Jefferson, Beaverhead, Shields — the list goes on.

“While other trout species like rainbow, grayling, and brook trout are not trending as steeply downward, they are also not filling the void brown trout are leaving either,” reads the Missouri River Headwaters Sub-Basin summer 2021 report.

June runoff in the Upper Missouri River Basin was only 52% of average this year. The undammed Big Hole is currently trickling along at 300 cubic feet per second near Melrose, when on an average year it’s at 1,000. At its upper stretches near Wisdom the river flowed at just 24 cubic feet per second in June.

Near Wisdom, the water temperature hit 73 degrees in June.

To address the trout situation, FWP laid out a series of possible fishing regulation changes, including fall closures to protect spawning browns and catch-and-release. Those ideas head to the Montana Fish and Wildlife Commission on Aug. 20 for consideration and possible emergency implementation.

However, FWP officials have repeatedly said they don’t think fishing is a principal driver, and that the changes may not make a significant impact.

FWP is also underway on a study of flow, temperature, and fish population data to identify long-term trends.

Then why a task force?

The agency sounded the alert, and should lead the charge, he said, but action is needed in areas of science and policy other agencies and authorities specialize in — including the governor himself.

The issue is three-pronged, Alsentzer said. You can’t just study the fish. Water quality and quantity are major factors, and other agencies hold expertise and control over those.

“Every single one of these rivers is starting to develop noxious algae blooms. Instead of the exception, they’re becoming the rule — even on the blue-ribbon trout stream the Gallatin, 50 miles downstream of Yellowstone National Park. As soon as it hits the first man-made pollution source it's starting to go neon green every single summer,” he said.

The Montana Department of Environmental Quality is key to the quality end of the task force, Alsentzer said, adding that the state’s Department of Natural Resources and Conservation is the expert on water quantity.

"Nobody denies that we've seen snowpacks down around 10% or lower for the vast majority of the Missouri's headwaters ... at the same time, we're seeing all-time high demands for water and use of water from a variety of different interest groups. We're also seeing an all-time high of recreational pressure on our rivers," he said.

The two key agencies named are state agencies, and Gianforte is the head of state. He’s also an expert businessman, Alsentzer said, adding that risking Montana’s rivers is bad business.

“It’s a huge risk to let the Upper Missouri River Basin start to slide downhill with its keynote cold-water fisheries. Let's bring together the A-team and give them some clear goals,” he said.

The coalition expects the task force, should it be formed, to conduct science that prompts policy change.

"Senate Bill 358 passed last legislative session. It's a horrific bill in terms of water quality. It literally removes science-based numeric criteria for measuring nutrient pollution, and reverts us back to this ambiguous standard of not knowing when we're already over a tipping point,” Alsentzer said.

Alsentzer said the conservation and outfitter groups want to leave the science up to the experts.

On Wednesday, The Montana Standard asked the governor for a statement — whether he would consider establishing a task force to address the issue, and why. Gianforte’s press secretary Brooke Stroyke responded.

“The governor shares Montanans’ concerns about this unprecedented drought and its wide-ranging impacts on our state. The administration will continue exploring measures to address the impacts of drought, and as always, we welcome ideas and proposed solutions from all Montanans,” she said.

Wednesday, Montana’s U.S. Senators encouraged the public to get vaccinated, but didn’t endorse the CDC advisory about wearing masks indoors.

In places, this landscape resembles a beige, barren winter. Trees and shrubs have no leaves, chewed off by a grasshopper swarm so large it registered on weather radar as a 170-mile-long thundercloud.

A dead trout floats at the edge of the Big Hole River near Dickie Bridge on June 23. The water temperature was 73 degrees.

A dead brown trout washes up on the lower Madison River, found by the Upper Missouri Waterkeeper conservation group during an unexplained fish kill on May 20.

The Big Hole River trickles by at a mere 24 cubic feet per second near Wisdom on June 20.