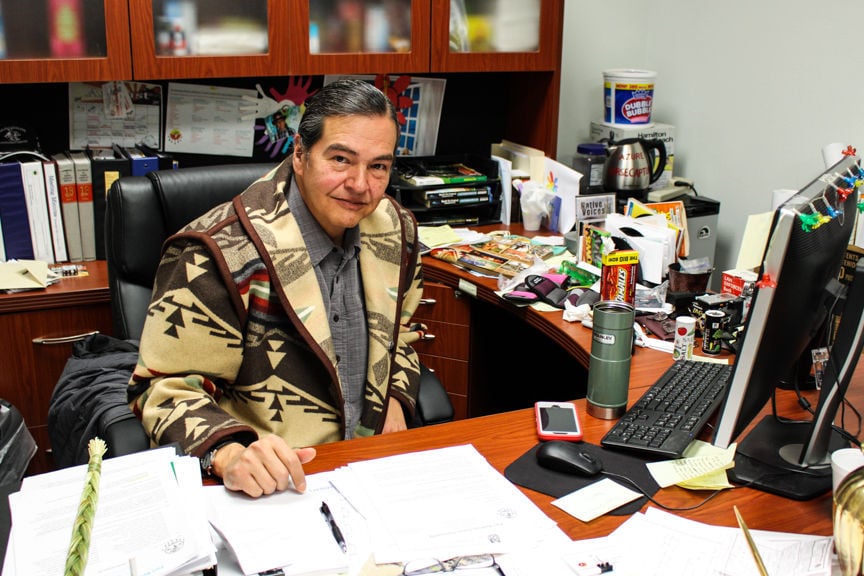 George Horse Capture Jr., vice president of the Fort Belknap Tribal Council, says that "this Hi-Line is suffering nowadays" because there are so few jobs and the reservation is at the junction of several major drug trafficking routes. 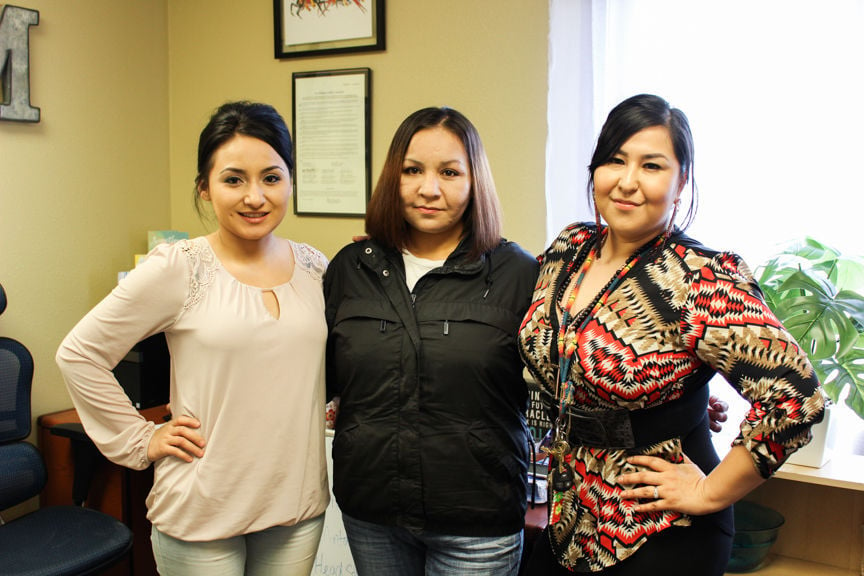 HARLEM — The myth of meth is that following the crackdown on over-the-counter ingredients in 2005, things got better in Montana. But on the Fort Belknap Indian Reservation, people will tell you something different.

Here it never really went away.

“Getting high in your car in front of the store — that ain't a big deal,” said Miranda Kirk.

“Leaving your paraphernalia out in the open for someone to walk in — that's all right,” said Kirk. “Having and seeing needles everywhere — that's OK. Even talking about selling your needles — that's normal too.”

Kirk, a 27-year-old mother of four, was born and raised in Fort Belknap, home to the Aaniiih and Nakoda, or Gros Ventre and Assiniboine tribes. She grew up around drugs, alcohol and addiction, and has dealt with the fallout her whole life.

She left for a few years, and when she returned, saw that a bad scene had gotten worse.

“We were dealing with schools now, with people that are saying they're seeing it as young as third grade ... because, 'Oh, that's OK.  I see that at home. My aunt does this, my mom does this. My dad does this. My grandpa does this' ... so they can't see the error in it. Or they don't see it as a risk,” said Kirk.

It’s hard to pin down exactly just how prevalent substance abuse is for specific Native populations. Indian Health Service officials estimate that between 2011 and 2015, dependence on methamphetamine and other psychostimulants more than tripled for tribal members in Montana and Wyoming.

The reasons in Fort Belknap are complicated. George Horse Capture, Jr., vice president of the Fort Belknap Tribal Council, said part of it is geographic. He said the reservation is at the junction of several major trafficking routes and there are gaps in police jurisdiction that traffickers exploit. Add to that the brutal fact that unemployment is three times higher on the reservation — close to 12 percent.

“Because there ain't nothing around,” said Horse Capture Jr. “This Hi-Line is suffering nowadays because it's not the way it used to be years ago. There was tons of jobs.”

The situation is difficult, but Kirk and her sister, Charmayne Healy, felt like everyone had given up trying to do anything about the rampant drug use. And, they worried about their kids falling into the same trap.

Fed up, the two of them went to tribal leaders last year and said someone needed to do something. Now.

“It was very heart-lifting to see young people are recognizing what's happening to their numbers. It’s their age bracket that has really taken a beating,” said Horse Capture Jr.

With Horse Capture Jr.’s help, the sisters persuaded the council to first declare a state of emergency against methamphetamine last January. This hadn’t been done before.

Tribal leadership was ready to spend some money to address the situation, which Horse Capture, Jr. called the smallpox of his day.

The council allocated $150,00 from a tribally owned profit-sharing venture to the project and asked Kirk and Healy to develop a plan.

They were caught off guard, but took the project on. Kirk started exploring substance abuse prevention and treatment models that might work at Fort Belknap.

She started hearing about something called “peer recovery,” a movement centered on the idea that people who have succeeded in recovering from their own addiction are uniquely equipped to coach others.

That clicked with her.

“The lightbulb came on. I’m like, that’s right. That works because what got me clean — they weren't peer mentors but in a sense they were peer mentors,” said Kirk. “They’ve been there. That made it easier for me to be able to express myself and not feel judged, or condemned, or like I'm a horrible person for what I was going through.”

Kirk knew what she was talking about because of her own struggle with an opiate addiction. She suffered from depression, and went through three miscarriages that landed her in the emergency room.

But, with the help of her church family, she was able to kick her habit, and her husband, a former meth addict, is clean now, too.

“If you have that strong support system, if you feel like somebody is in your corner, and if you have strong faith, that makes any kind of pain, any kind of challenge, any kind of barrier in front of you, seem a few inches tall. Seem like it's just a little tiny molehill instead of a mountain,” Kirk said.

She started going around to all the communities on the reservation, asking addicts she knew why they didn’t seek out treatment at the Chemical Dependency Center on the reservation, or elsewhere. They told her that there’s a lot of stigma attached to reaching out for help.

“And I'm like, 'Well, what if you had someone there with you? Someone that knows what it was like?'” Kirk asked them, saying most thought that would help.

In early 2016, the sisters launched the Aaniiih Nakoda Anti-Drug Movement — one of the first Native-led peer recovery pilot projects in Montana.

Thirty-year-old Jessica Healy came knocking at their door before they were even up and running after her only son was taken away last year.

She’d been using drugs, including meth, on and off since she was 18.

She described her struggles while at the cafeteria of an elementary school in Lodge Pole. She goes there every week for the Life Givers Circle, a group for Native American women dealing with addiction and codependency.

“We talk about stuff and we make ribbon skirts, activities, and we just help each other out,” Healy said.

It’s one of about four peer support groups that the Aaniiih Nakoda Anti-Drug Movement have helped start, both on and off the reservation.

“It was a good feeling to be clean and to be close to people that had been going through the same thing and to know that there's others out there,” Healy said.

Jessica is not an outlier. Peer support has a lot of potential.

A growing body of research has found that people who complete peer recovery programs don’t relapse as often. They’re charged with fewer crimes and have fewer re-hospitalizations.

Dyani Bingham, of the Billings-based Rocky Mountain Tribal Leadership Council, has helped develop peer projects like this one. She said she’s impressed with what’s been going on in Fort Belknap.

Aaniiih Nakoda does more than just peer-to-peer and group meetings. They go into schools and talk to kids about prevention, and help organize events like Zombie walks, where people pretend to be the drug-addled walking dead.

At this point, there’s only one outpatient drug treatment facility on Fort Belknap, and no emergency housing or sober living facilities. The only after-care available is the peer support Miranda Kirk’s group does.

But there is hope that may change after Montana enacted a new law setting clear standards for peer recovery specialists, which could make it easier for them to bill insurance companies and, potentially, Medicaid.

Bingham says that’s huge, and goes a long way in legitimizing the profession.

“It's kind of like this tipping point within the state of Montana and the momentum building around peer recovery support after all of these years of advocating and trying to build awareness. We're finally gaining ground,” said Bingham.

While the law is a crucial first step, it doesn’t immediately fix the cash flow issues for grassroots programs that do peer recovery.

In the meantime, Miranda Kirk and Charmayne Healy plan to incorporate their anti-drug organization as a nonprofit.

One year in, six of the 20 clients they’ve helped have stuck with their recovery goals. That’s triple the number Kirk planned for.

In addition to Fort Belknap, there are Native-led peer recovery programs on the Crow Reservation and in Billings. And the tribes from Fort Peck and Rocky Boy are interested in starting their own now, too.

Jessica Healy, Fort Belknap’s first client, says what’s important is for people to start where they are and start speaking up.

“And be like, 'Hey, there's something else out there. There’s a job. There’s a group. This Aaniiih Nakoda Anti-Drug Movement and they could help you,'” Healy said. “They'll support you in everything that you want to do for yourself and you'll be a person that you never ever thought you could be.”

This story was produced as part of a series by students at the University of Montana School of Journalism exploring the impact of methamphetamine use on Montana. More from the series can be found at metheffect.com.

The meth effect: Montana communities cope with drug use

Jace Dyckman had plenty of reasons to try and escape through drug use. When he was 13, his brother was murdered while making a bank deposit af…

POLSON — Sheriff Don Bell worries about the state of Lake County’s jail, which like many in Montana, is regularly filled to capacity.

She thought he would make it.

Dr. Doug Melzer usually works nights in the emergency room at Providence St. Patrick Hospital in Missoula. He spends most of his time dealing …

Lauren Pope struggled with drug addiction for more than a decade.

HELENA — It was a perfect home for their growing family. James and Josephine Slack had purchased a small house in a rural neighborhood on Mill…

HELENA — Montana’s attorney general stood on the steps outside of the Capitol in Helena and announced this state has a problem with drugs.

Celes Castrol remembers that day in eighth grade when she and her friends discovered the meth pipes in the room of one girl’s parents.

Crow women gather to practice language, saying 'our language is our identity'

There is no word for “goodbye” in the Crow language. Rather, in Apsalooke, it’s “shia-nuk" (see you later).

George Horse Capture Jr., vice president of the Fort Belknap Tribal Council, says that "this Hi-Line is suffering nowadays" because there are so few jobs and the reservation is at the junction of several major drug trafficking routes.