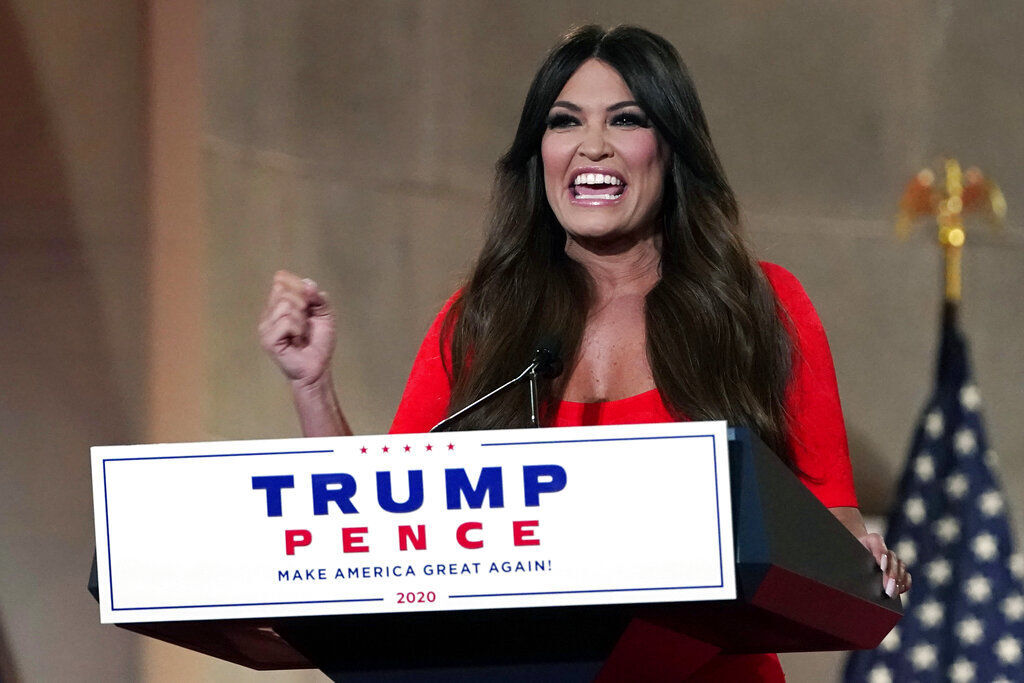 FILE - In this Aug. 24, 2020, file photo Kimberly Guilfoyle speaks as she tapes her speech for the first day of the Republican National Convention from the Andrew W. Mellon Auditorium in Washington. The Republican National Convention last month featured relentless attacks on Democrats, mirroring what's playing out in the state. Despite California's vast wealth "Democrats turned it into a land of discarded heroin needles in parks, riots in streets and blackouts in homes," Guilfoyle, the governor's former wife, said in her convention speech. (AP Photo/Susan Walsh, File) 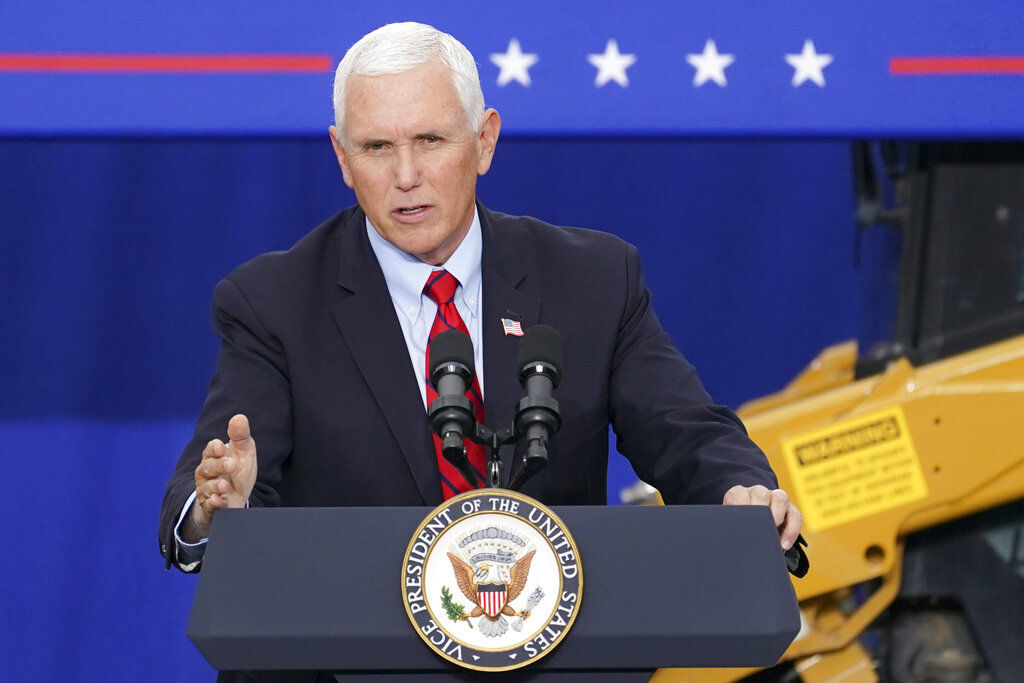 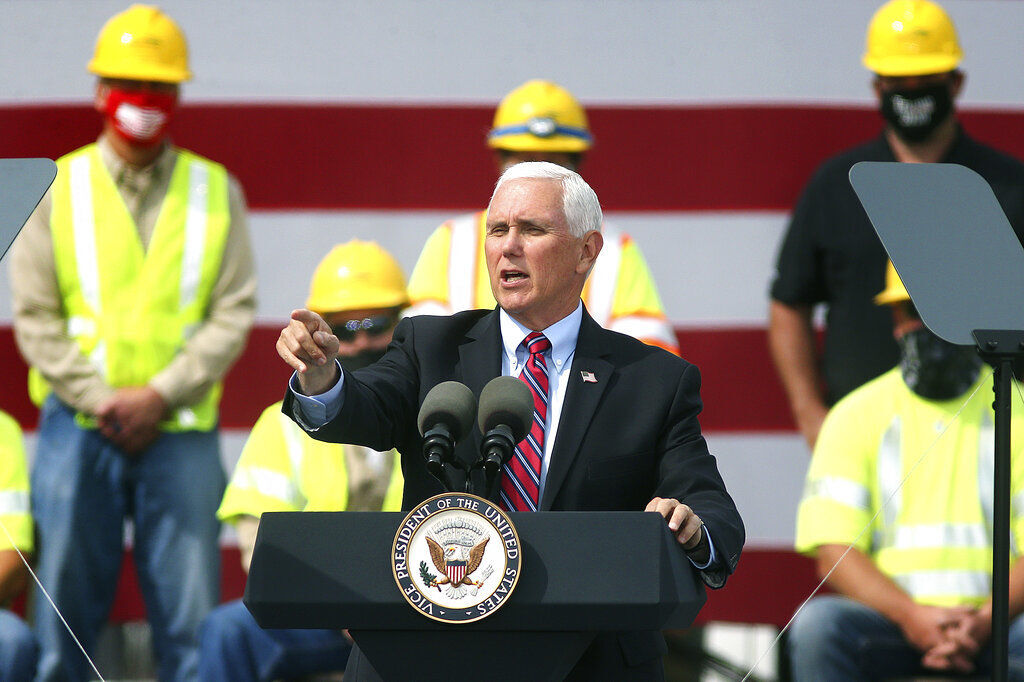 WASHINGTON — Vice President Mike Pence and top officials from President Donald Trump's campaign are slated to attend a Montana fundraiser next week hosted by a couple who have expressed support for the QAnon conspiracy theory, according to an event invitation obtained by The Associated Press and a review of social media postings.

Vice President Mike Pence will host a rally for Montana Republican candidates in the Bozeman area next week, following a fundraiser for President Donald Trump's campaign.

Pence is hosting a rally Sept. 14 in support of U.S. Sen. Steve Daines, U.S. Rep. Greg Gianforte and state Auditor Matt Rosendale. Daines is being challenged by Gov. Steve Bullock, Gianforte is facing off with Lt. Gov. Mike Cooney in the governor's race while Rosendale and Kathleen Williams are vying for Montana's lone U.S. House seat.

Representatives of Daines' and Gianforte's campaigns confirmed the congressmen planned to attend the private Trump fundraiser prior to the rally.

The rally in support of the candidates, which is scheduled to be held near Belgrade, will be open to the public, but the number of people permitted to attend is restricted due to COVID-19 regulations, according to the event invitation.

The hosts of the fundraiser, Caryn and Michael Borland, have shared QAnon memes and retweeted posts from QAnon accounts, their social media activity shows. The baseless conspiracy theory posits that Trump is fighting entrenched enemies in the government and also involves satanism and child sex trafficking.

While many Republicans have dismissed QAnon, the fundraiser is another sign of how the conspiracy theory is gaining a foothold in the party. Trump has hailed Georgia congressional candidate Marjorie Taylor Greene, another QAnon supporter, as a "future Republican star." The president has refused to condemn QAnon, recently telling reporters that the conspiracy theory is "gaining in popularity" and that its supporters "like me very much."

Representatives for Pence declined to comment on the fundraiser, though the vice president has previously called QAnon a "conspiracy theory."

"I don't know anything about QAnon, and I dismiss it out of hand," he told CBS last month.

Representatives for the Trump campaign didn't immediately comment on the fundraiser. Caryn and Michael Borland did not return a call seeking comment on the event.

QAnon is a wide-ranging conspiracy fiction spread largely through the internet, centered on the baseless belief that Trump is waging a secret campaign against enemies in the "deep state" and a child sex trafficking ring run by satanic pedophiles and cannibals. It is based on cryptic postings by the anonymous "Q," purportedly a government insider.

The story has grown to include other long-standing conspiracy theories, gaining traction among some extreme Trump supporters. The movement is often likened to a right-wing cult; some followers have run for office, primarily in the Republican Party, though some have been independent or run as third-party candidates. Trump has refused to say QAnon is false.

The Borlands have shared multiple QAnon social media posts, as well as other discredited conspiracies.

Michael Borland prominently features several QAnon "Q" logos on his Facebook page. One features a flaming "Q" with a Christian cross in the middle. He has also shared the QAnon oath as well as its slogan, which states: "Where We Go One We Go All."

From his Twitter account, which also features the "Q" logo, he also shared a post that labeled the Black Lives Matter movement "terrorists" and made his own threat to shoot protesters, according to a June 25 post.

Caryn Borland has retweeted or engaged with QAnon Twitter accounts. In April, she responded to a pro-Trump Tweet from a QAnon account by replying "Always" with a praying hands emoji.

The couple has donated over $220,000 to Trump's reelection, the bulk of which was made in Caryn Borland's name.

They were guests at the president's renominating convention last month. They posed for photos from the White House South Lawn, including one that shows Michael Alfaro, a Trump fundraiser from Illinois, in the foreground. Alfaro, who is also slated to attend the Montana fundraiser, responded in the comments: "Working for the Borland family on South Lawn!"

The couple also said they dined with Republican Sen. Rand Paul of Kentucky, according to a caption on a Aug. 27 Facebook photo of the couple and Paul.

The couple previously posed for a picture with Trump, which Michael Borland posted to Facebook on Dec. 20.

A 16-year-old Alberton girl died Tuesday night after she was accidentally run over by a vehicle she had stepped out of as a passenger, according to Montana Highway Patrol.

One man is in custody after a fire in Missoula's westside neighborhood Tuesday night started in a trailer home and caught two trees, sending flames 50 feet in the air, according to the Missoula Fire Department.

FILE - In this Aug. 24, 2020, file photo Kimberly Guilfoyle speaks as she tapes her speech for the first day of the Republican National Convention from the Andrew W. Mellon Auditorium in Washington. The Republican National Convention last month featured relentless attacks on Democrats, mirroring what's playing out in the state. Despite California's vast wealth "Democrats turned it into a land of discarded heroin needles in parks, riots in streets and blackouts in homes," Guilfoyle, the governor's former wife, said in her convention speech. (AP Photo/Susan Walsh, File)