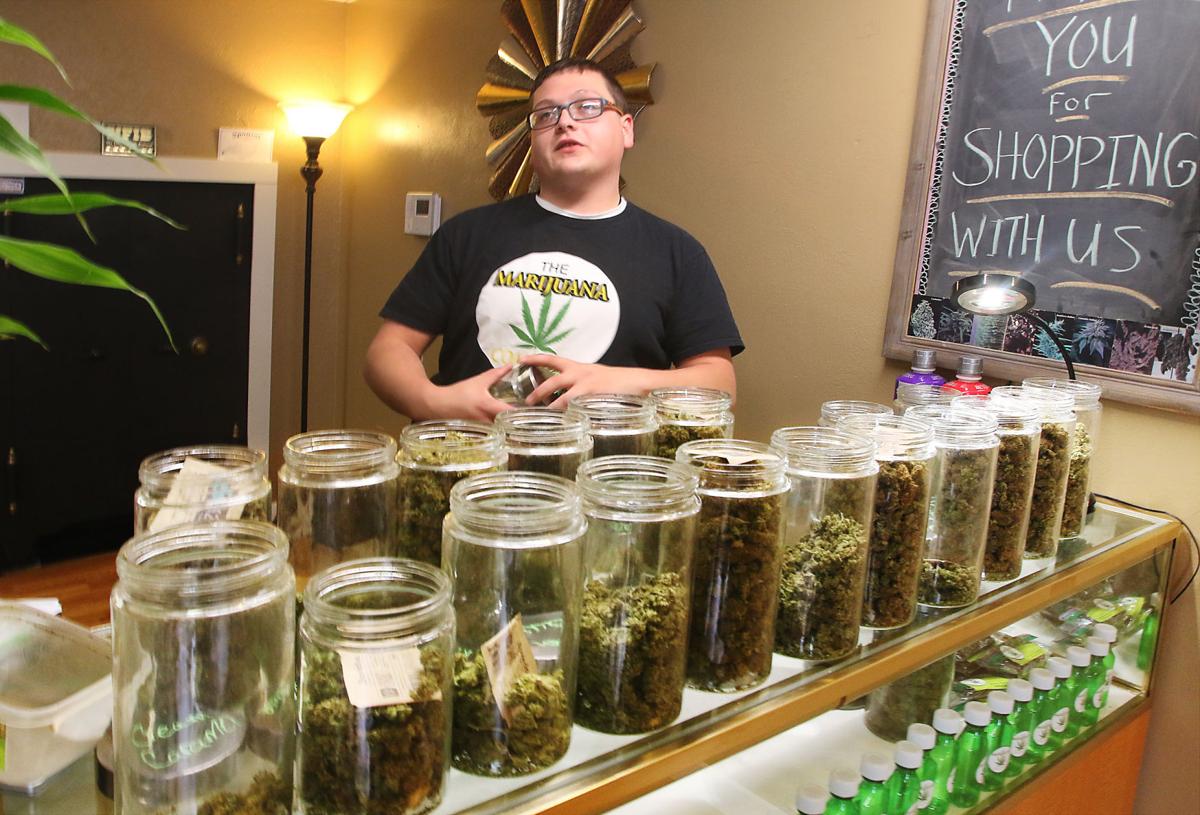 Even though business has picked up, George Zachary who runs the Marijuana Company, 2040 Harrison Avenue, anticipates he will have to dispose of all remaining medical marijuana inventory before the law that limits providers to three clients takes effect Sept. 1. He is pictured in the store on Tuesday. 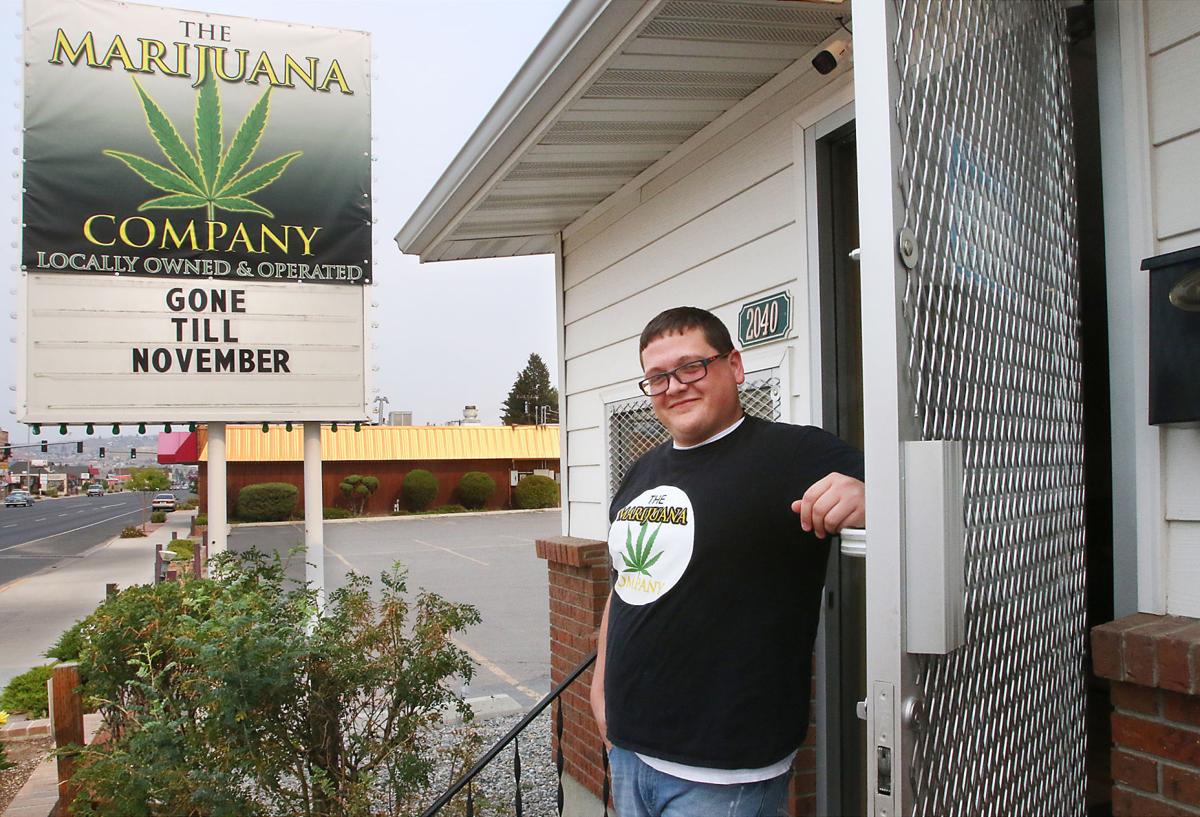 George Zachary, a clerk at the Marijuana Company, 2040 Harrison Ave., is pictured last summer. The store closed Sept. 1 and has not yet reopened despite the passage of Initiative 182.

BUTTE – The majority of Silver Bow County's 782 registered medical marijuana patients as of Wednesday are cut off from further access to their medicine for at least 10 weeks – when voters on Nov. 8 will determine the outcome of a new ballot initiative.

But as of now, with Senate Bill 423 finally kicking in, Montana's medical marijuana providers are limited to just three patients, effectively gutting the program but keeping it around on paper.

Meanwhile, patients are stocking up and rationing, said one provider.

Silver Bow County's 18 providers will only be able to serve a combined total of 54 patients, leaving the other 728 in the county – 93 percent – with only the option of growing their own medicine or buying it on the street.

JJ Thomas, owner of the Marijuana Company, 2040 Harrison Ave., said no company can operate with a three-patient cap now mandated by the state. The Marijuana Company is closing, further reducing the number of Butte patients with access. Thomas said they plan to reopen in November, banking on the voters’ approval of Initiative 182 allowing his 100-plus patients to return.

"Until then, they're on their own," Thomas said.

George Zachary, a clerk at the Marijuana Company, said most of the providers’ patients aren't able to grow for themselves because they rent their housing or they're disabled by chronic pain. He said that's why patients come to dispensaries in the first place.

Of the 13,170 patients enrolled in the Montana Marijuana Program as of July, over 70 percent use marijuana for some kind of chronic pain, statistics show. Others use marijuana to enable them to eat, or to mitigate epilepsy.

"I watched a girl go from 14 seizures a week down to three," Zachary said, "and next week I get to see who's not going to eat."

He said business ramped up as the Aug. 31 deadline got closer, but after the store shuts down he'll work labor jobs and hope the vote turns out in his favor. He's confident, as I-182 to repeal the patient ceiling overshot on signatures to get it on the ballot.

That ballot would also add Post-Traumatic Stress Disorder as a qualifying condition for medical marijuana in Montana, where almost 10 percent of the population is comprised of military veterans.

"We're going to be seeing a lot more of our boys," Zachary said. "No use shoving pills down their throat and messing with their brain chemistry."

If passed, I-182 would also add governmental oversight for the medical marijuana industry, correcting a lack of regulation that makes Montana unique among states that have legalized medical marijuana.

"Montana sets the standard right now for what an unregulated system looks like," said Chris Lindsey, an anti-prohibition attorney and senior legislative counsel for the Marijuana Policy Project.

According to Lindsey, the process of becoming a provider in most states involves a lengthy bureaucracy of licenses, product testing, workplace inspections and other hoops to jump through. Lindsey said those institutional controls don't exist in Montana, and that the federal government's leniency in prosecuting medical marijuana providers comes only from an understanding that states regulate themselves.

Lindsey knows the dangers of this gray zone well – his medical marijuana business was raided in 2009 and Lindsey was charged with violating federal law near the height of provider enrollment in Montana's program.

The law that went into effect Friday was originally passed in 2011 as a reaction to the explosive growth of Montana's medical marijuana industry. Immediately challenged in court, certain provisions still cut provider and patient populations down to their current levels, while the injunction preventing the law's full implementation expires Wednesday.

With almost all patients now cut off from their medicine and no strong regulatory institution in place to handle the confusion, Lindsey said this is the worst-case scenario for patients, law enforcement, providers and legislators.

"There's no guidance from the state on what patients should do during this time," he said.

Lindsey has faith I-182 will pass.

According to the Montana branch of the National Organization for the Reform of Marijuana Laws, the majority of Montana citizens support medical marijuana, and even regulated commercial sale. He said the 2011 backlash was legislators acting against the wishes of the majority of the state.

Strong support for marijuana reform puts Montana closer to Washington, Oregon and California than its immediate neighbors of Idaho, Wyoming, South Dakota and North Dakota. Those states do not have medical marijuana programs, and according to polls most citizens don't support them.

"Montana shows no sign of being an exception to strong support for medical marijuana," Lindsey said.

Error in marijuana initiative could delay changes to law

Medical marijuana shouldn't be used for menstrual cramps – and one "hit" is comparable to drinking 10 beers, according to a speaker who presen…

Even though business has picked up, George Zachary who runs the Marijuana Company, 2040 Harrison Avenue, anticipates he will have to dispose of all remaining medical marijuana inventory before the law that limits providers to three clients takes effect Sept. 1. He is pictured in the store on Tuesday.

George Zachary, a clerk at the Marijuana Company, 2040 Harrison Ave., is pictured last summer. The store closed Sept. 1 and has not yet reopened despite the passage of Initiative 182.