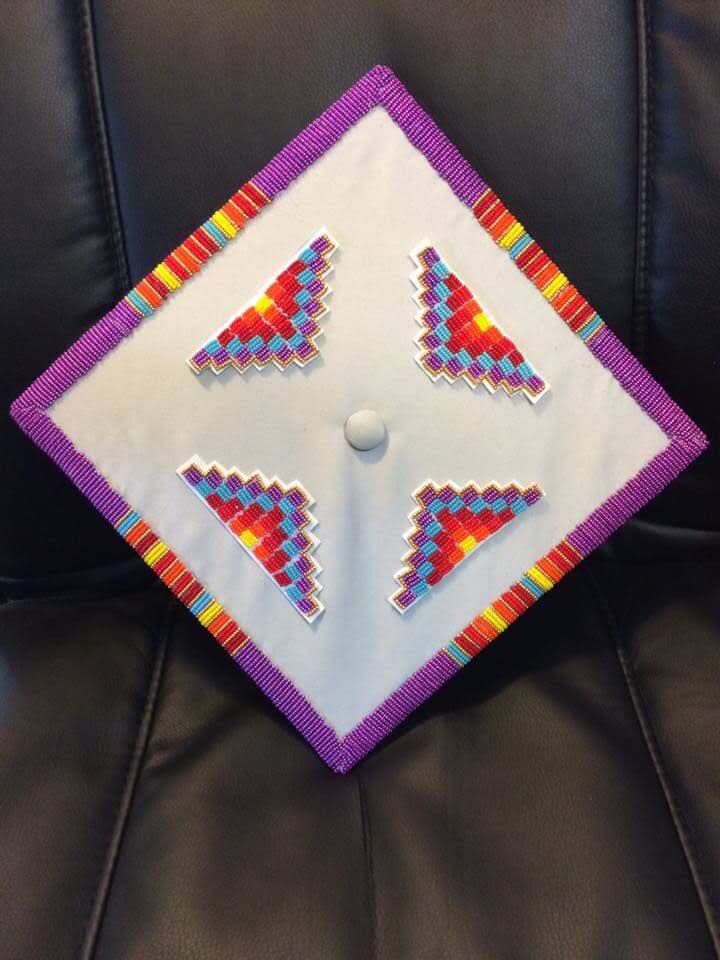 The beaded mortarboard that Kylei Big Bow wore at her 2018 graduation from Polson High School. 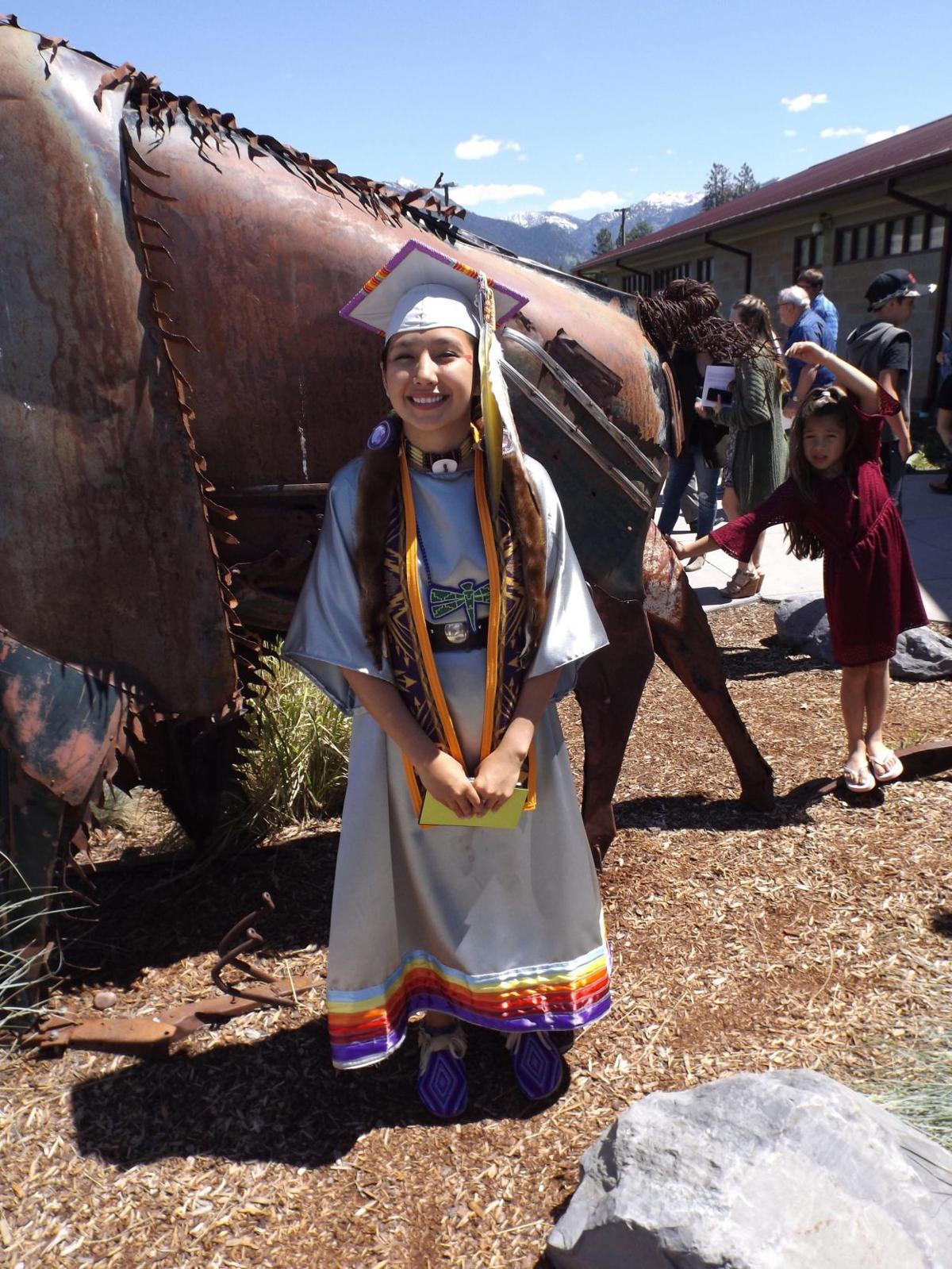 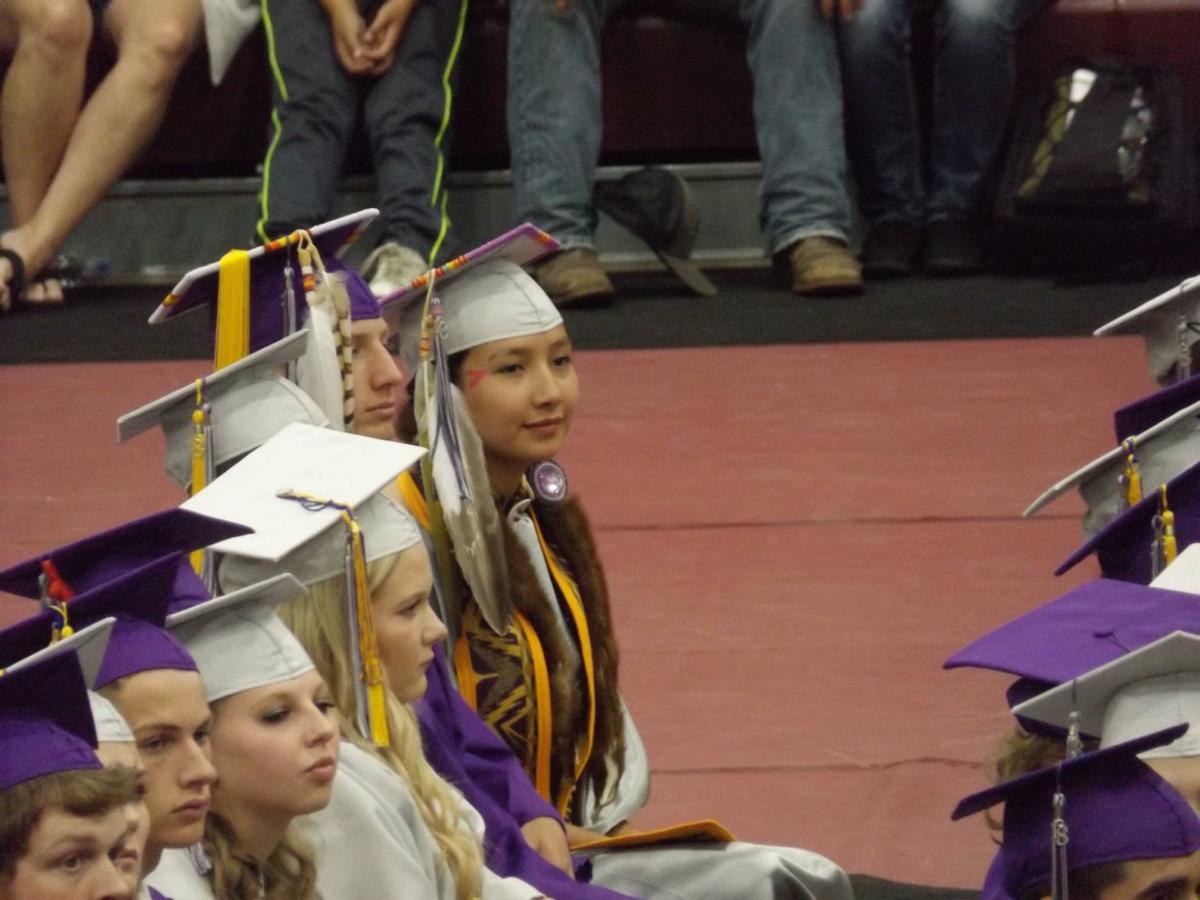 The beaded mortarboard that Kylei Big Bow wore at her 2018 graduation from Polson High School.

POLSON — When Marita Growing Thunder graduated from high school here in 2017, she didn’t wear a gown. She made her dress.

Growing Thunder, a member of the Fort Peck Assiniboine and Sioux Tribes, spent her senior year at Polson High making traditional ribbon skirts to honor missing and murdered indigenous women. She made her graduation dress partially for that project, and partially “because my parents and my grandmother weren’t able to wear their dresses when they graduated. They weren’t given that option growing up.”

School administrators once had the power to block Native students from wearing ribbon dresses, beaded mortarboards, eagle feathers and other types of regalia at graduation. In 2017, Montana passed the first state law protecting students’ rights to wear regalia at public events.

But as Polson High School’s June 9 commencement approaches, its handling of this practice is under scrutiny.

While the law states that “a state agency or a local government may not prohibit an individual from wearing traditional tribal regalia or objects of cultural significance at a public event,” Polson School District policy requires students to gain administrators’ approval for tribal regalia, and beadwork on their mortarboards that they would like to wear at graduation.

That rule, said superintendent Rex Weltz, is meant to avoid offending anyone. “Here's what I never wanted,” he said. “I never wanted a Polson High School student to wear something that wasn't culturally significant and was offensive … to our Native American population.”

The district lists 28 of the 90 Polson High seniors as being of American Indian/Alaska Native descent. Weltz voiced strong support for Senate Bill 319, the 2017 law that protects students’ rights to wear “objects of cultural significance.” But he also posited not all objects would meet that standard.

As far as beadwork goes, Weltz said, “what I don't want to do is have ‘Hashtag 2019 rocks’ … . That's not significant, that doesn't make sense to me, so (when) those are of question we can take it to the IEC,” or Indian Education Committee. He said that school district body, which advises on Native education, can provide valuable guidance when questions of cultural significance arise.

“We want kids to be prideful of what they can wear, their regalia, and we just need to know what it looks like, if it's questionable, so that we don't offend our Native population. That’s all we’ve ever asked.”

Regina Mad Plume has a different take on it.

“Everything they’re trying to do is a slap in the face to all of the people who did this activism, who lobbied” for Senate Bill 319, she said. Mad Plume was one of those people, a community organizer with Western Native Voice who pushed for the bill’s passage in 2017. She belongs to the Confederated Salish and Kootenai Tribes, but stressed that she was speaking for herself.

Now, Mad Plume is a Native American cultural specialist at Polson’s Cherry Valley Elementary School. She was at a meeting earlier this month among school district administrators, Indian Education Committee members and staff from the Confederated Salish and Kootenai Tribes’ Tribal Education department.

When the approval policy came up for discussion, she remembered, “I just right away raised my hand and said I was not offended by Native American culture whatsoever, and that Senate Bill 319 was passed, allowing students to wear their tribal regalia …. I tried to get that across to them, that this policy is illegal.”

It also worried meeting attendee Kylei Big Bow, a 2018 Polson High School graduate and member of the Laguna Pueblo and Chippewa Cree tribes. She received her diploma in a ribbon dress, beaded mortarboard and eagle feathers. "I wanted to represent myself as a Native American graduate, and it's very important to myself and my family that I share my heritage," she said.

In a May 22 Facebook video, Big Bow called the district’s policy “very irritating, because each tribe has significance for different things, and it’s very unfair to bring them to the IEC. It’s also unfair that a white man gets to choose whether or not it’s culturally significant.” Mad Plume also aired her concerns.

Both the district and the Indian Education Committee soon issued statements describing “a significant amount of misinformation circulating on social media regarding the Polson High School graduation ceremonies.” Both stated that “at no time did any member of the group state that students would be prevented from exercising their rights” under the state’s regalia law.

“There's a misconception, like, we don't let them wear anything,” Weltz said. “That's not true.”

But some of the school district’s policies on the topic do contradict one another. Its e-book of board policies specifically protects students’ rights under the regalia law in two different places. But another provision, read by Big Bow in her video, restricts mortarboard beadwork to a half-inch band around the outside edge, and requires that designs be approved. Meanwhile, a copy of the student handbook provided by Weltz says that “administration can make exceptions (to the mortarboard rule) upon pre-approval.”

In practice, Weltz said they approve most of the proposed designs. Marita Growing Thunder said she just had to describe her dress to the principal. Kylei Big Bow doesn’t remember having to get approval.

Nonetheless, Western Native Voice program director Ta’jin Perez said the approval requirement needs to go. “The law says ‘tribal regalia and objects of cultural significance,’ and that is self-defined by the individuals, and that is the intent and framing of the legislation,” he said.

Marita Growing Thunder also took issue with the requirement. So did Lillian Alvernaz, Indigenous Justice Legal Fellow with the ACLU of Montana.

Perez said other districts followed the law without policies like Polson’s. “Our hope is a peaceful resolution where all parties are informed and satisfied with the outcome, and we would hope that Polson School District comes to the perspective with an overall view of the law,” he said.

Jonah DuCharme, a Polson High senior, likes what he's seen in the administration's response so far.

When he first heard about the regalia rules through social media, it struck him as “just more trying to suppress the culture …. I believe the policy came out kind of in that way.”

He voiced those concerns to Principal Pete Hamilton, saying that there should be no restrictions on beaded mortarboards, but later softened his stance. “I re-suggested the idea that white students as well as Native American students should be approved,” letting them all decorate their mortarboards within acceptable limits of taste.

“I really appreciate Mr. Hamilton being completely understanding,” he said.

Just over a week remains before graduation. DuCharme says his cousin is beading his mortarboard for the big day, and he doesn’t foresee any issues.

“At the graduation practice, I was going to hand it to them, let them approve it, and go from there.

“It’s in our culture,” he said. “We always love to celebrate great accomplishments.”

Superintendent Weltz said that those with questions or concerns on this topic should contact the district. Visit polson.k12.mt.us for contact information.

CHARLO — The school board election under way in this town is small, but ugly.