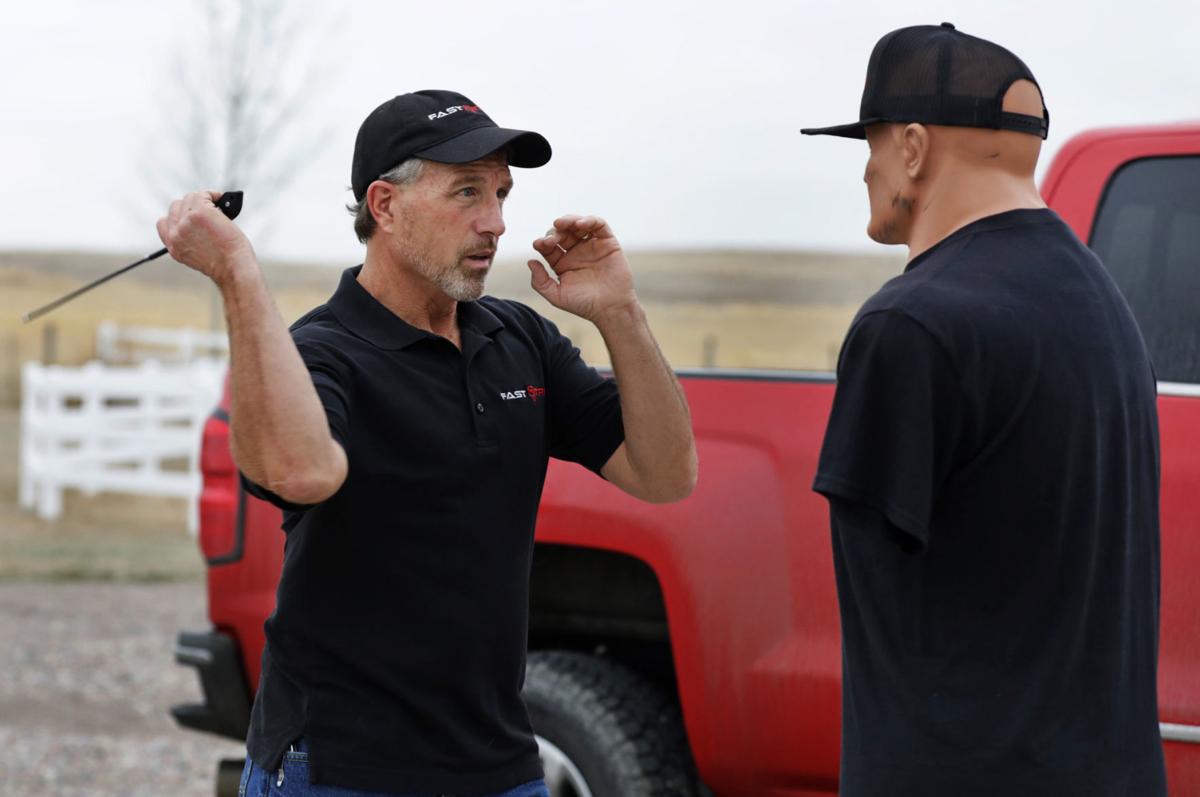 Dave Duford, creator of the Fast Strike Defense, demonstrates different ways to use his self-defense tool on his dummy "Bob" in his driveway on Monday morning. 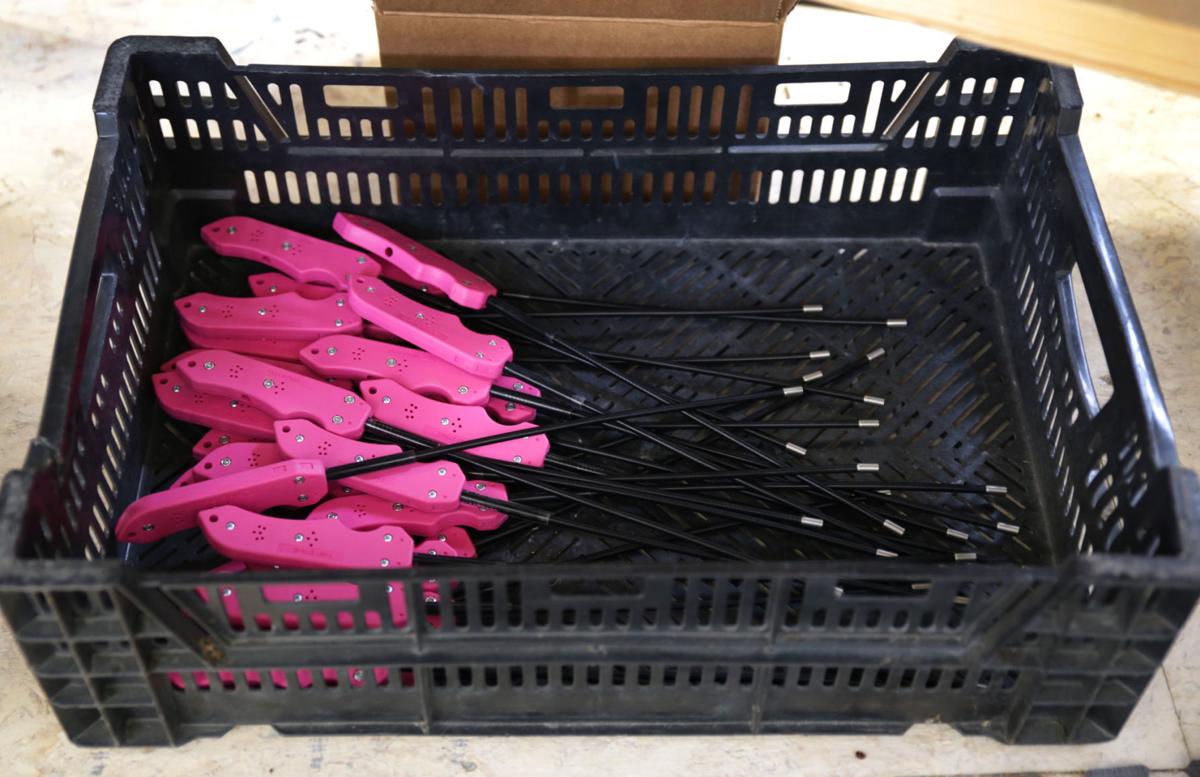 A crate full of finished Fast Strike Defense whips sits beneath a workbench in Duford's driveway shed. Each one is pieced together by him or his daughter Shalaina Neighbors, and several of the components come from within Montana.

POLSON — Dave Duford says his invention is “quite a devastating little bugger.”

He concedes “it doesn’t look like much” — a short steel cable with a molded plastic handle, looking more like a grill lighter than a self-defense weapon. But this miniature whip, called Fast Strike Defense, stings the hand with even a gentle tap.

“A swing from this, a full-blown swing, is really a painful ordeal,” one that he says can stop an assailant. More than 20,000 buyers with that goal have bought Fast Strike Defense since it launched in early 2017, he estimates.

Whip-maker was an unlikely career turn for Duford, who spent decades working for Jore Corp. and Core Innovation, helping develop electric motors and related components. But in 2016, he took a look at self-defense options for his daughter, Shalaina Neighbors, and didn’t like what he saw.

“My daughter was heading down to Vegas, and I was really worried about her safety, obviously. How is she going to protect herself?”

Duford said he gave Shalaina a small knife and said, “If you have to, just do what you gotta do.” But he knew that using that kind of weapon could subject her to deep legal scrutiny. And he also saw drawbacks in non-lethal weapons. Batons and nunchucks struck him as too complex; pepper sprays could be ruined by extreme temperatures or blown off course by wind.

The longtime product developer had a clear set of goals. “I wanted something that was very reactive, stiff, and it had to generate a lot of pain but not kill anybody.” Soon, he found a relatively low-tech solution. “I started playing with this whip, and I started figuring out, yeah, this thing could work.”

Through months of trial and error — making “a lot of terrible, terrible product” and “hitting myself a lot” — he came up with a 17-inch handheld whip. Strong but springy, with a stainless-steel striking tip, Duford said that, when used, “it’s going to break fingers and hands, it's gonna hurt like a bugger, but it's not going to kill anybody.”

Sgt. George Simpson with the Polson Police Department, made it clear that his agency doesn't make product endorsements, and that when someone is in danger, "we like to see people get out of a situation and notify law enforcement as quickly as they can."

That said, Simpson said that he would consider Fast Strike Defense "like any other self-defense product," in the sense that its effectiveness depends on the user's proficiency.

That's easy to attain with this product, Duford said.

“Simple self-defense, that's what it's all about, and if you can move your arm or your wrist, you can develop a very good strike.”

By early 2017, Duford had a market-ready weapon — one that left a painful-looking welt on his back in one online video, and that cleaved a honeydew melon in another. But “invention is just such a tiny little sliver” of success, he said. “You got to have the product but … if you can't sell it, you got nothing, no matter how good the product is.”

He faced that reality for a while after launching, as he struggled to sell the weapon from his website. “I was invisible for six months,” he said. ”It was terrible. … I didn't realize how difficult it is to get seen. You're competing with millions and millions of people for the same space.”

But midway through 2017, his fortunes turned, when a YouTube video he'd made to demonstrate the whip went viral. “Based on that, this thing just took off … the last six months of that year were just crazy,” he said. “We got on Amazon, we got on eBay and we were just selling tons of these things.”

Each $22.95 whip was pieced together by him or Shalaina in a driveway shed, and several of the components came from within Montana. “We can make a lot of product in one day, just the two of us,” he said.

Montana law authorizes use of force for self-defense, but marketing this product has required Duford to navigate the web of concerns and regulations surrounding weapons.

Sales have slowed in recent months, a shift that he blames on Amazon’s recent decision to remove it and other non-lethal weapons from the site. Now, “expanding the distributorship is probably my major focus, because I just need more exposure. People are finding my website and we still sell a lot of them, but it's really difficult to compete.”

To gain an edge, Duford hits the road often, hauling his whips and a training dummy named “Bob” to trade shows where he demonstrates the weapon’s strikes and blows, working to add new websites, martial-arts studios and other outlets to Fast Strike Defense's network of distributors. He’s started exporting to Canada and France, and has developed new packaging, with an eye to expanding into brick-and-mortar retail.

Duford says buyers have reported successfully deterring both malevolent dogs and human attackers. Torr Harrison, an instructor at Missoula’s Sakura Warrior Arts, agrees that it could be effective against the latter.

“I've been hit with a car antenna before and that looks like it would hit almost or just about as bad,” he said after watching videos of the whip in action. “I wouldn't want to get hit across the face a couple times” with it.

Harrison noted that, like with any weapon, a Fast Strike Defense user would need to be able to access it quickly for it to be effective. But he thinks that it could help a potential victim “to get you out of a situation … not to finish a guy off.”

A 47-year-old man is being held on $250,000 bail on suspicion of severely beating a woman he'd repeatedly assaulted before.

Sentinel High School shooting suspect to be tried as an adult; trial set for January

The 17-year-old charged with shooting two other juveniles, one in the face and the other in the chest, earlier this year in what he called sel…

Families choose Montana trails instead of shopping on Black Friday

Dave Duford, creator of the Fast Strike Defense, demonstrates different ways to use his self-defense tool on his dummy "Bob" in his driveway on Monday morning.

A crate full of finished Fast Strike Defense whips sits beneath a workbench in Duford's driveway shed. Each one is pieced together by him or his daughter Shalaina Neighbors, and several of the components come from within Montana.