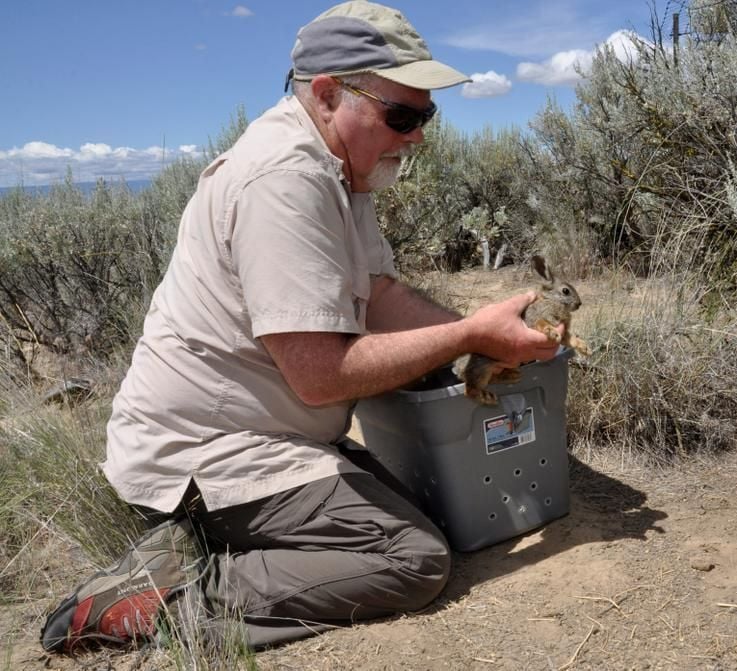 Peter Lancaster releases a breeding pygmy on his land. 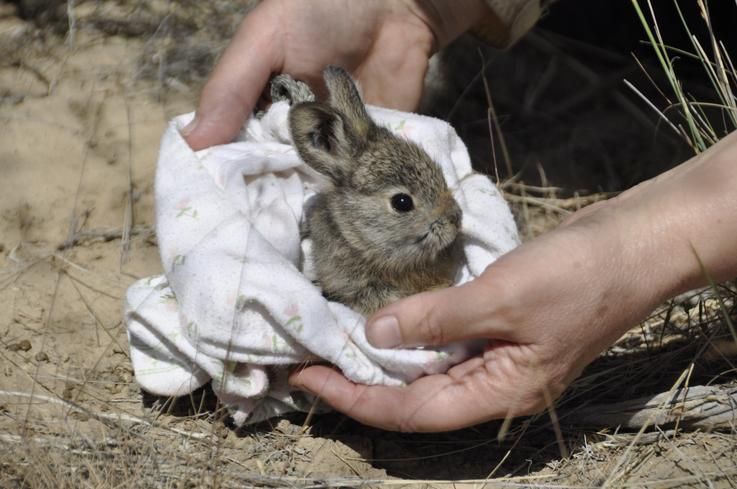 After being captured in a 9-acre semi-wild enclosure about 3 weeks after birth, a young pygmy rabbit is released by a volunteer into a nursery enclosure so it can grow larger before being released into the wild.

"To me it's like destiny fulfilled," she said. "Protecting biodiversity is what we're all about."

Pygmy rabbits joined woodland caribou as the most endangered mammals in Washington in 2003. But in the last few years, the pygmies have once again been breeding like rabbits in four 9-acre, semi-wild enclosures in Douglas County.

"Nobody could have predicted that in three years of the new strategy we'd be producing so many," said JoAnn Wisniewski, Washington Department of Fish and Wildlife biologist and rabbit specialist. "At least 794 kits were produced in enclosures last year for release."

Another bumper crop is being produced this year for transfer to state-protected lands. Last week's release was the first on The Nature Conservancy's land. "We're thrilled," said Stanton, who was among several TNC volunteers helping last Thursday, one of numerous scheduled capture-and-release days.

Washington's effort to save the diminutive rabbits - adults weigh less than a pound - has endured failures and successes.

The effort has involved state and federal agencies, Washington State University and zoos that worked out captive breeding issues to revive a species that was one blink from winking out in Washington.

But there would have been no hope for the pygmy rabbit without the long-range effort that started decades ago to preserve expanses of native sagebrush. The foundation for conservation was built by the state, the conservancy and a single individual with a soft spot for rabbits.

"It's an obsession," Peter Lancaster said, after being asked to describe his interest in rabbits. "I was fascinated by rabbits even as a kid."

Formerly a community college humanities teacher and editor, he was hired by Microsoft in the 1980s when the company had fewer than 900 employees, compared with about 100,000 worldwide today. He retired in 1996.

"That freed me to go looking for pygmy rabbits," he said.

Lancaster was aware that the pygmy rabbit had been listed as a state threatened species in 1990 and advanced to endangered status in 1993.

The fifth-generation Washingtonian, who was raised in Wenatchee, made forays from Seattle to central Washington to look for any remnant populations of the smallest rabbits in North America. He would hike through Douglas County semi-desert areas to look for tiny droppings and burrows under clumps of six-foot-high sagebrush.

The pygmy rabbit is the only bunny that digs its own burrows. But being barely larger than a softball at maturity, its habitat is limited to the same deep, loamy soils that appealed to the region's dryland wheat farmers.

"I was camped out up on that ridge in 1998 when I found them," he said, pointing to a treeless, featureless slope of sage in the Beezley Hills east of Ephrata.

He had discovered one of Washington's last remaining populations of Columbia Basin pygmy rabbits.

"I told some wildlife biologists and they were all excited," he said, noting that the only other surviving population was in a portion of the state's 12,718-acre Sagebrush Flat Wildlife Area.

"But while I was camped out, I saw a grader punching a road into this land. I checked and it had been subdivided into 40-acre lots."

Lancaster contacted the owner and bought the land - about 900 acres. "It was the only option," he said. "It had to be done, and quickly."

Seventeen years later, he was standing on his land inside one of the 9-acre natural rabbit breeding enclosures set up by state wildlife biologists.

"The conservancy has always been very concerned about protecting biodiversity in general," said Chuck Warner, TNC's arid lands program director based in Wenatchee.

The effort was too late for the distinct population of Columbia Basin pygmy rabbits isolated in Washington. Considered nearly extinct by 2001, the population was federally listed as an endangered species in 2003.

"Once the rabbit was emergency listed, we were able to apply for federal cost-share grants that helped us acquire additional intact habitat specifically for the pygmy rabbit," Warner said.

While TNC was looking long-range, wildlife scientists were focused on intensive care.

To address the breeding, deformities and disease issues in captivity, Columbia Basin and Idaho pygmy rabbits were intercrossed. The resulting offspring were no longer purebred, but they were healthy.

The first trial release on Sagebrush Flat Wildlife Area in 2007 was a bust. None of the 20 animals released survived a year.

Several more years of experimentation were required to work out techniques for adapting captive-bred rabbits to the wild.

A new strategy launched in 2011 involves the semi-natural enclosures that keep coyotes out and deter weasels, while mature rabbits breed and produce young. Until they can dig their own dens, artificial burrows are provided to give the rabbits some security against raptors that can fly into the enclosure.

From 2011 to 2013, biologists translocated 109 pygmy rabbits from Nevada, Utah and Oregon to the breeding enclosures in Douglas and Grant Counties, along with the remaining captive rabbits. More were brought in from Wyoming last year.

The new plan is working, with wildlife biologists handling 1,200 rabbits last year, from April through August.

Capturing the rabbits in the natural enclosures, where they feed on sagebrush with some food and water supplementation, is labor intensive.

State wildlife staff and volunteers must walk through the sage in pairs and wallow in the dust as they force a coil through the five-foot long artificial burrow tube to chase bunnies out into a bag held by a teammate at the other end.

Rabbits that hide in natural burrows must be lured into traps baited with lettuce.

The rabbits are so productive from April through August, the crews must work each of four enclosures each week. "We got 90 rabbits from one enclosure in 10 days," she said.

"They breed starting in February and can produce three to four litters a year, up to six kits per litter, which I expect we exceed every year because conditions appear to be ideal for them here," she said.

A female rabbit's production will go down after two years, she said, noting that "a 5-year-old pygmy rabbit is old."

Gestation is 25 days. After two weeks in their burrow, kits about the size of a tennis ball emerge and are immediately on their own.

With production in good order, the next challenge is survival.

The Nature Conservancy has been gearing up to that scenario for a range of sage-steppe plant and animal species. The group has secured three major blocks of habitat in northcentral Washington, including the Moses Coulee unit, 3,700 acres, and the McCartney Creek, 16,000 acres.

The Beezley unit, which includes 7,900 acres adjoining Lancaster's property, is playing the key role in the recovery of pygmy rabbits. Most of the other preferred sage habitat that hasn't been secured by state agencies has been converted into farm land.

"Pygmy rabbits are very picky eaters," Wisniewski said, noting that 90-95 percent of their diet is sagebrush. "When we look over this land, biologists see mostly things pygmy rabbits won't eat. There are even sagebrush species they won't eat, but they like Wyoming big sage and basin big sage - and both of those species are here."

"Sagebrush is pretty toxic stuff unless you evolve to digest it," said Chris Warren, who heads the U.S. Fish and Wildlife Service's participation in the program. The little rabbits also have adapted to surviving in a harsh environment where temperatures range from below zero to more than 100 degrees.

So far, biologists have no good handle on how many rabbits are surviving in the wild. They'll start getting information this year by collecting pellet samples and comparing the DNA with flesh punched out of each rabbit's ear before it's released.

"The odds have been against them," Warner said. "They have a lot of what they need here, but there are also a lot of predators. Rabbits are the prey, the bottom of the food chain."

Indeed, coyotes were singing near the enclosure at 7 a.m. last Thursday as volunteers headed out to trap rabbits. Northern harriers checked out the area, but were deterred by the human presence that day.

A dead rabbit was found disemboweled, probably by a raptor.

The Nature Conservancy is on board, and so is Peter Lancaster, who owns a prime chunk of sage habitat in the middle of it all.

"This is my own little dream come true, helping these rabbits survive," he said as he released a pygmy last week.

Lancaster said his section and a half in the Beezley Hills is dedicated to a species he hopes will eventually become unendangered.

"This is pygmy rabbit country," he said. "It will never be developed. It's in my will."

Montana reported 198 new COVID-19 cases Tuesday, and two more of its residents have died due to the virus.

Peter Lancaster releases a breeding pygmy on his land.

After being captured in a 9-acre semi-wild enclosure about 3 weeks after birth, a young pygmy rabbit is released by a volunteer into a nursery enclosure so it can grow larger before being released into the wild.