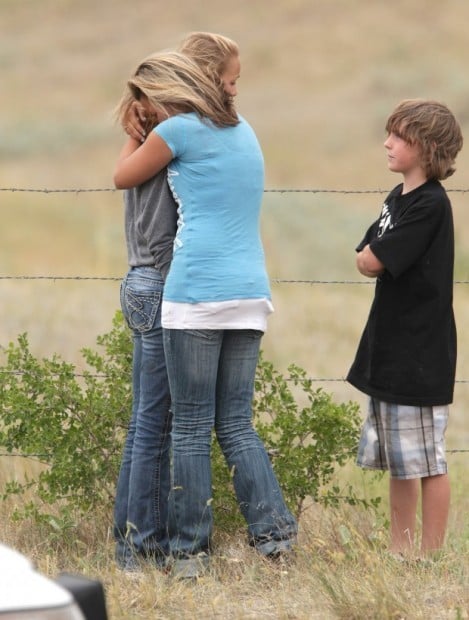 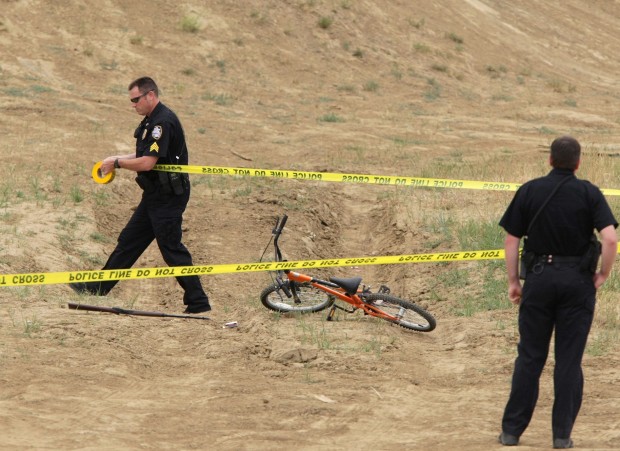 Billings police tape off an area where a 5-year-old boy was found shot on Thursday night.

BILLINGS - A 5-year-old boy who suffered life-threatening injuries after being shot by a friend remains hospitalized, but is improving, said Don Crawford, a man who came to the boy’s aid.

Crawford visited the boy and his parents at St. Vincent Healthcare on Friday afternoon.

The boy’s gunshot wound required two surgeries and a blood transfusion, and the boy was in a half-body cast on Friday.

The boy is recovering from a broken femur and a punctured femoral artery, Crawford said.

“He was in and out of it, but he managed to smile at me a couple times,” he said. “I must have kissed his forehead 100 times.”

Doctors said he was recovering well and may be out of the intensive care unit as soon as Saturday, the boy’s parents told Crawford.

His parents said they thought the boys were just riding bikes, doing what kids do on a summer day.

The boys were in an undeveloped area northwest of High Sierra dog park on Thursday evening when the 8-year-old allegedly shot the 5-year-old with a small-caliber rifle, Sgt. Matt Brewer said.

Officers found and identified the 8-year-old. He was transported with his parent to the police department for an interview on Thursday night. Police did not release additional information about the incident on Friday.

Crawford lives in the neighborhood and said he goes to the dog park two or three times a week, but he’s never been that far back in the area.

“There’s a lot of circumstances that happened to bring me to that boy,” he said.

The wounded boy was first found by stepsisters, 12-year-old Brooke Fuqua and 14-year-old Mariah Storlie, who were riding dirt bikes through the area, which is nearby their home.

On their first ride through the park the girls saw two bikes lying in the dirt. On their second time around the dirt path, Storlie’s bike stalled and slid out beneath her. She tried several times, but wasn’t able to restart the bike.

Fuqua turned around to help her sister. At that time, she saw the injured boy about 100 feet away lying on the ground near a barbed-wire fence. The girls ran over to the boy, who appeared to be seriously injured.

“We saw him laying there covered in blood and not crying, which scared me the most,” Fuqua said. “I thought maybe he had been run over by the horses in the field or attacked by a mountain lion.”

Fuqua said she knew they had to get help as fast as she could. At that point, she said, adrenaline took over, and she ran back to the bikes to ride home for help.

Meanwhile, Storlie stayed back with the boy trying to keep him calm by asking him questions and rubbing his head.

“He couldn’t answer anything I was asking—his name, if he was hurt—he just moaned,” Storlie said. “I think he was in complete shock.”

Crawford, 47, who owns Crawford Insurance Agency, said he wasn’t sure what had happened until later.

He saw the two girls riding motorcycle dirt bikes earlier and then noticed one of the girls raced back toward houses on Wicks Lane, Crawford said. “I knew something must have been wrong,” he said.

Crawford drove over to where the girls were and saw the second girl leaning over a boy, who was on his stomach. He called 911 as he got out of his truck, rolled the boy over and saw a lot of blood.

“I tried to do as much first aid as I could,” he said.

“He was in and out of consciousness,” Crawford said on Friday morning. Crawford tried to keep the boy awake, repeatedly telling him, “Stay with me, little man,” he said.

By the time the boy left in an ambulance, Crawford said the boy was very white and pale. “He was in rough shape,” he said.

Brewer said it appeared the boy had been shot at least 15 minutes before being found.

Later, Crawford said he saw a .22-caliber rifle on the ground with spent shell casings nearby.

“I didn’t even see the bicycle or the gun laying only about 40 yards from where we were at,” Crawford said.

The girls said everybody had their part in the boy’s survival.

If the dirt bike hadn’t stalled right where it did, Fuqua said, they wouldn’t have seen the boy.

And Crawford said if both girls would have ridden off together, he wouldn’t have been alarmed to check on them.

“My brain can comprehend it, but my heart can’t,” Fuqua said. “I think he has a guardian angel that told us to do everything exactly how we did it.”

The shooting remains under investigation.

BILLINGS - A 5-year-old boy is in the hospital after being shot in the Heights on Thursday evening. Police say he was shot by an 8-year-old boy.

Billings police tape off an area where a 5-year-old boy was found shot on Thursday night.