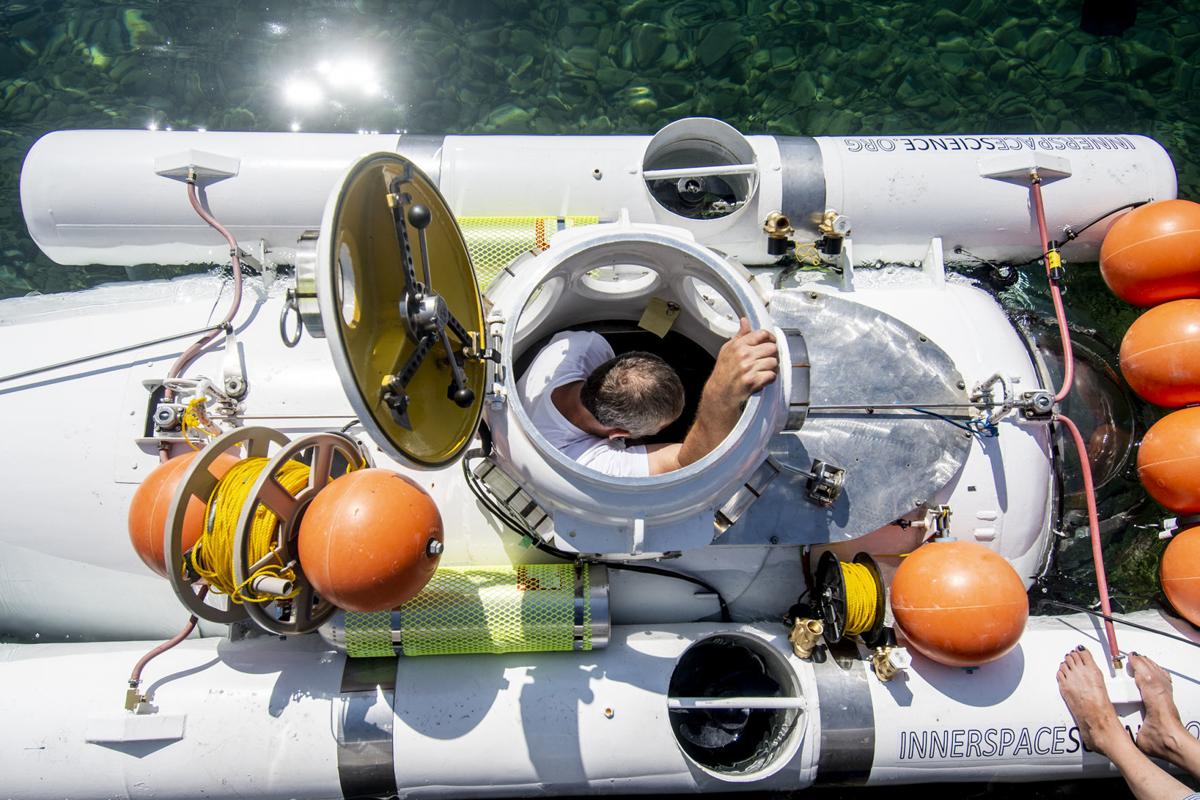 Hank Pronk of British Columbia climbs into his homemade submarine docked at the Flathead Lake Biological Station on Tuesday morning. Pronk and a team of divers are using the submarine to gather samples of substrate as part of a larger data gathering mission at Flathead Lake. 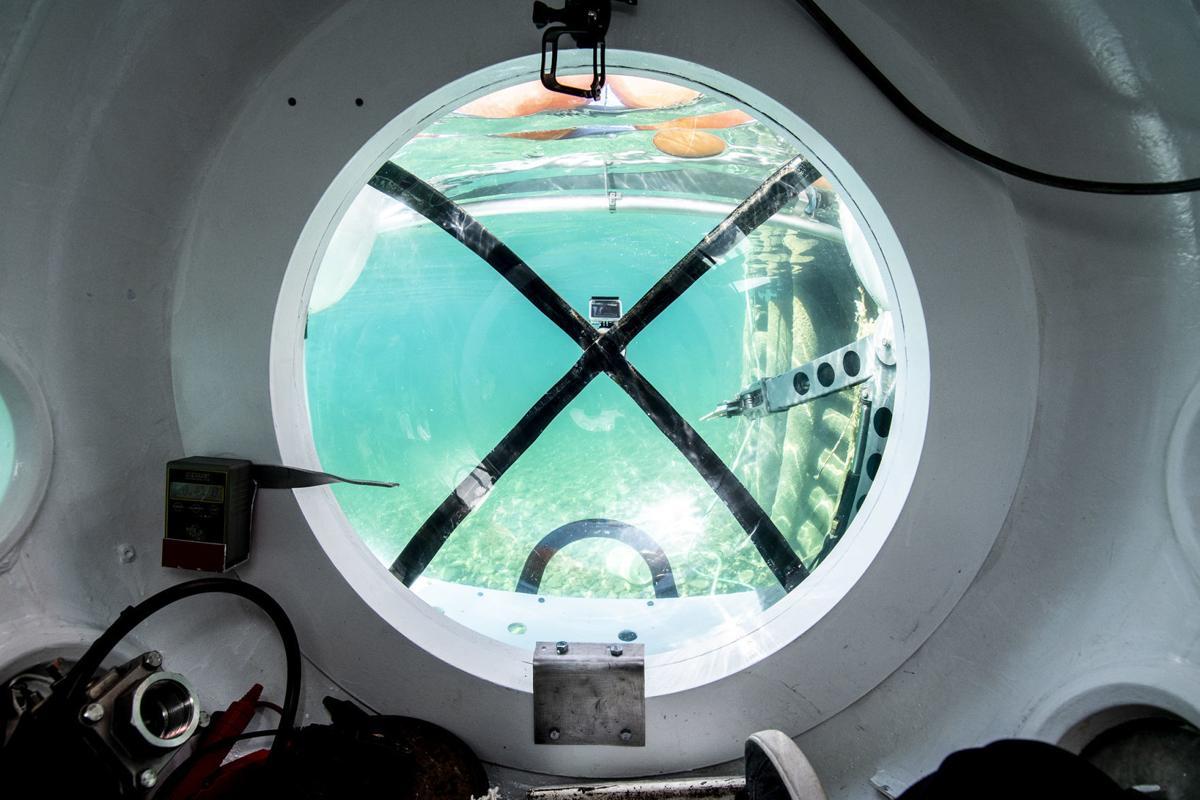 Pronk owns six submarines in total, which are housed in British Columbia. The submarine being used at Flathead Lake is built with 516-70 pressure vessel steel, which can withstand a depth of 1,000 feet. 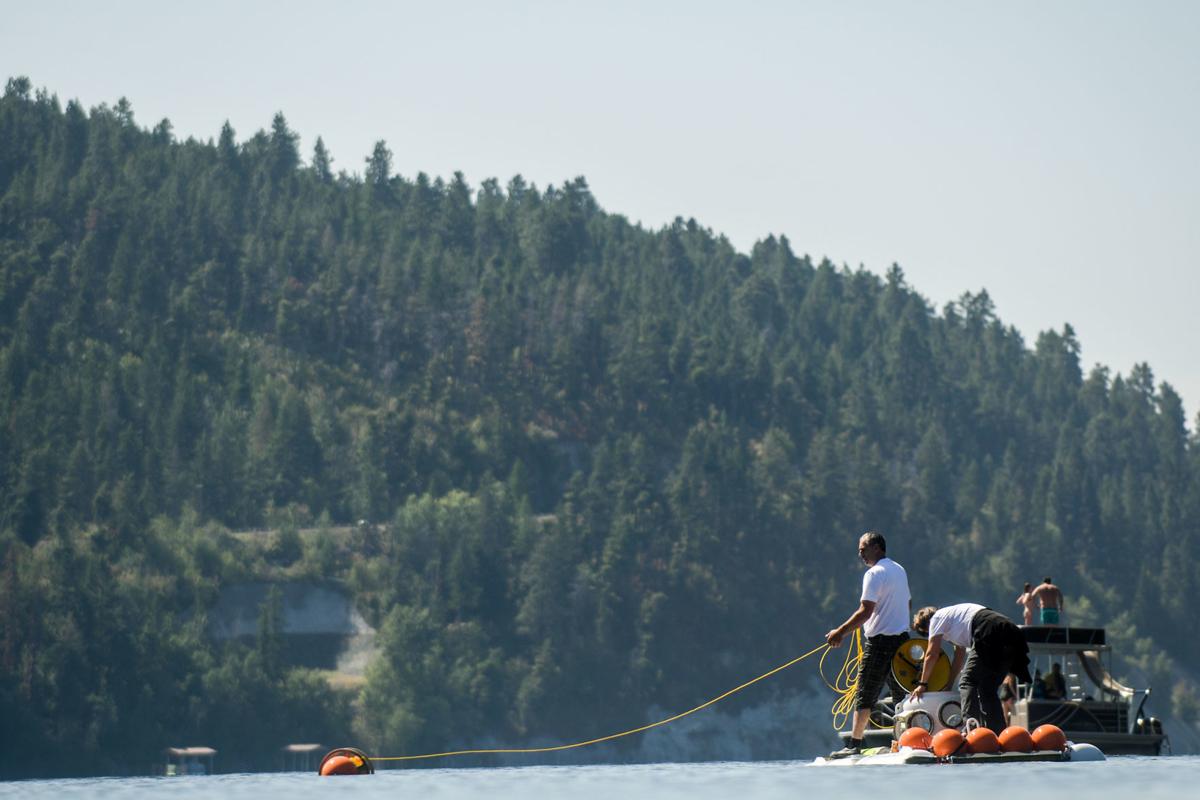 Pronk took multiple members of the media on guided tours in the submarine Tuesday.

Hank Pronk of British Columbia climbs into his homemade submarine docked at the Flathead Lake Biological Station on Tuesday morning. Pronk and a team of divers are using the submarine to gather samples of substrate as part of a larger data gathering mission at Flathead Lake.

Pronk owns six submarines in total, which are housed in British Columbia. The submarine being used at Flathead Lake is built with 516-70 pressure vessel steel, which can withstand a depth of 1,000 feet.

Pronk took multiple members of the media on guided tours in the submarine Tuesday.

FLATHEAD LAKE — Something alien bubbled up to the surface in Flathead Lake’s Yellow Bay on Tuesday. In the wake of a pontoon boat and a Jet Ski, two safety divers followed a submersible as it ascended from 30 feet below.

The sub, roughly the size of a sedan, glided toward the edge of the bay, where it docked near the University of Montana’s Flathead Lake Biological Station. Its captain, Hank Pronk of British Columbia, emerged from a hatch and met with biological station research scientist Jim Craft on the dock.

“For the next few days, people who love submarining will be hooking up with the scientists here at the lake,” Craft said.

The Nekton Gamma is one of two subs that will be diving at points around Flathead through Friday, when the public is invited to an open house (see box). They’ll be collecting samples, taking measurements and recording videos at depths that have been out of reach for the scientists at the station. According to Craft, the information compiled by the subs will give him and the rest of the researchers a clearer view of the “physical, chemical and biological” makeup of the lake’s deeper zones.

“They can get a lot deeper than our divers can,” said Craft, who has been at the Flathead Lake Biological Station for 31 years.

The dives for the week mark the first time the station has had access to submersibles for research, and the opportunity came via a community of submarining hobbyists who lend their passion to science and education. Innerspace Science, an organization that puts scientists in touch with privately-owned submersible crews, reached out to the station through its expeditions program.

“I’ve got a yard full of subs,” said Pronk, who built his first submersible at 16.

Pronk bought the Nekton Gamma, built in 1971 and rated for up to 300 meters, six years ago and put two years of restoration work into it. Along with having a detachable escape pod, the seat in her cabin once accommodated French explorer Jacques Cousteau on a dive.

His visit to the largest freshwater lake in the West with the Nekton Gamma’s crew will be the second time Pronk has coordinated with scientists through Innerspace Science. He went to Lake Tahoe in the summer of 2018, conducting dives with graduate students at the University of California — Davis to study the lake’s underwater habitat.

The Nekton Gamma will go to depths of up to 160 feet below the surface of Flathead Lake during the week, gathering samples of substrate at multiple layers of the water. This diverse collection of lifeforms will help to inform future projects.

“We don’t know very much about what’s deep in the lake. So when we start putting together a proposal for funding, having as much information as possible always helps,” Croft said.

For Tuesday’s dive, the sub took researchers at dozens of meters deeper than their wet and dry suits allow.

“I bounce right off the thermocline,” said Meghan Heffernan, a research and administrative assistant. During the summer, warm water rests at the top of the lake and denser, colder water waits below for the divers.

Heffernan has spent the past three summers at the station, and last week she dove five meters for periphyton, “fuzzy rocks,” as she calls them. Heffernan boarded the Nekton Gamma, along with several other researchers as passengers, to observe the silt, fish and aquatic plants that fill the lake’s littoral zone near the shore.

Part of the sub’s mission for the week will be gathering more fuzzy rocks from the lake bottom, and tracking the movements of mysis shrimp when they rise to the surface to feed at night.

Mysis shrimp entered Flathead Lake in the 1980s, after being introduced to Swan, Ashley and Whitefish lakes to help boost their Kokanee salmon populations. Their numbers exploded to over 80 billion in Flathead, with all of them consuming the main food source of the Kokanee salmon: zooplankton.

Lake trout populations boomed with the mysis shrimp, and the native Kokanee salmon have vanished and the bull trout remains under threat. According to Craft, the impact of the mysis shrimp is in constant flux, and it needs recording.

Craft said the data collected on the behavior of the mysis shrimp, combined with deep-water sediment samples, will help the station map out the ecological structure of the lake, from microbes to bull trout.

The Flathead Lake Biological Station will be hosting a free open house Friday, August 9, from 1 p.m. to 5 p.m.

It will feature boat trips on the station’s 30-foot research vessel, the Jessie B, and include science presentations about Flathead Lake and its watershed.

Both submersibles aiding the scientists in their research will also be on display.

The Flathead Lake Biological Station has launched a monitoring site in Polson Bay, the first addition since the research station of the Univer…