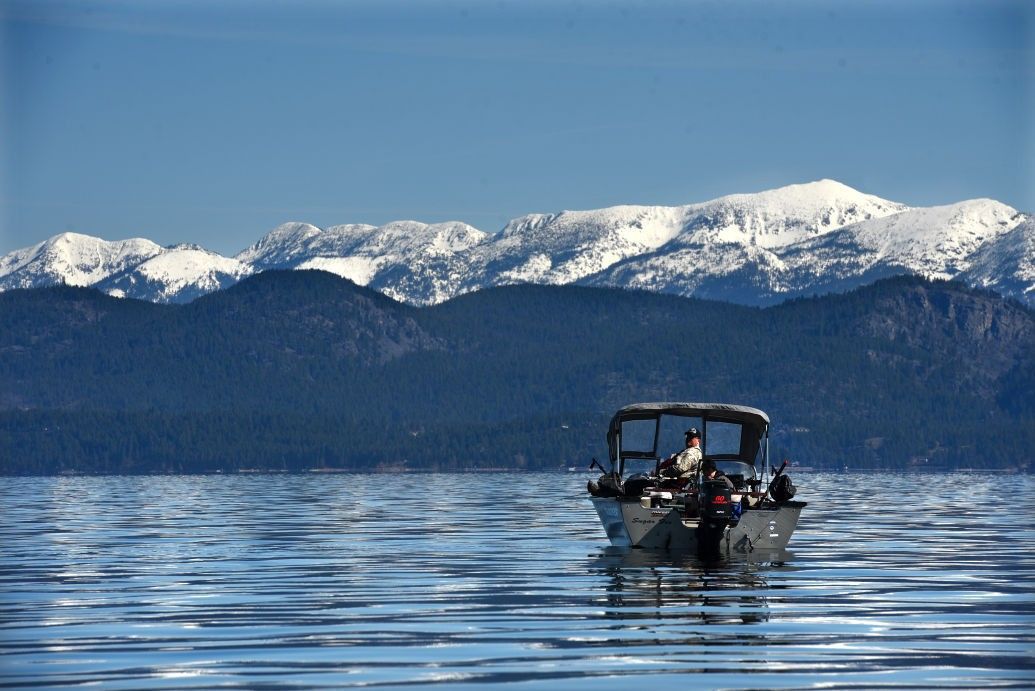 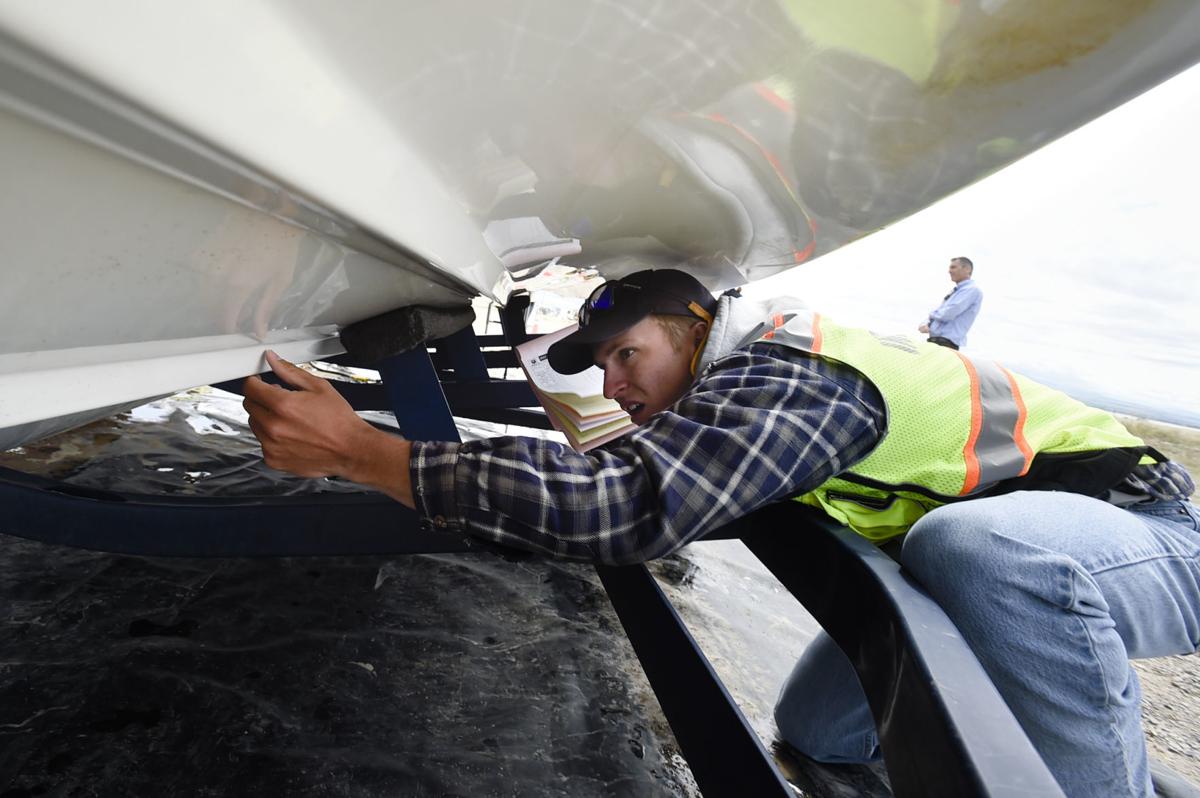 Watercraft inspector Ryan Dorvall gets a closer look at the hull of a boat on June 29, 2017, at the Silos decontamination station on Canyon Ferry Reservoir. 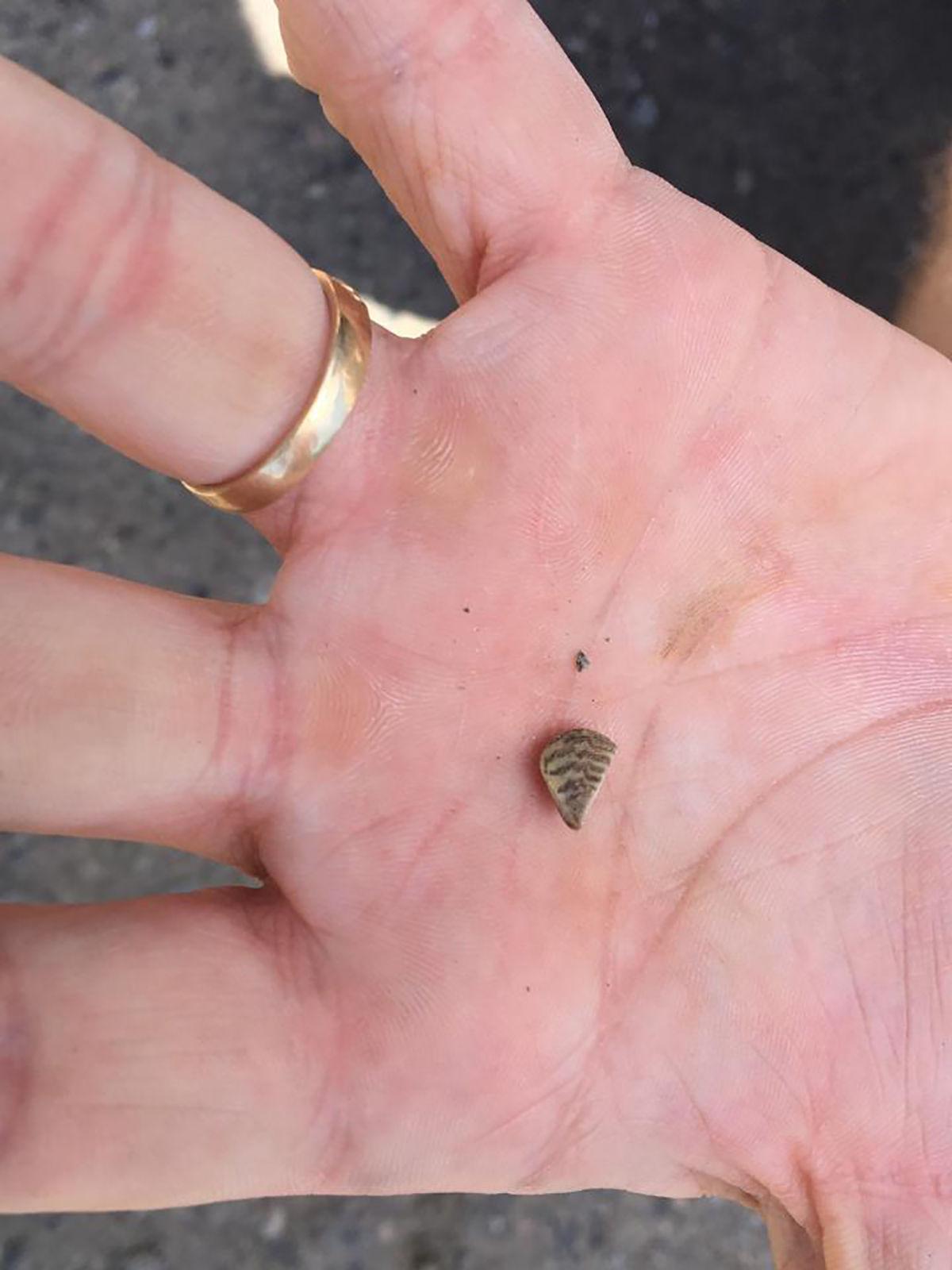 A worker holds an invasive mussel discovered on a boat over Memorial Day weekend. 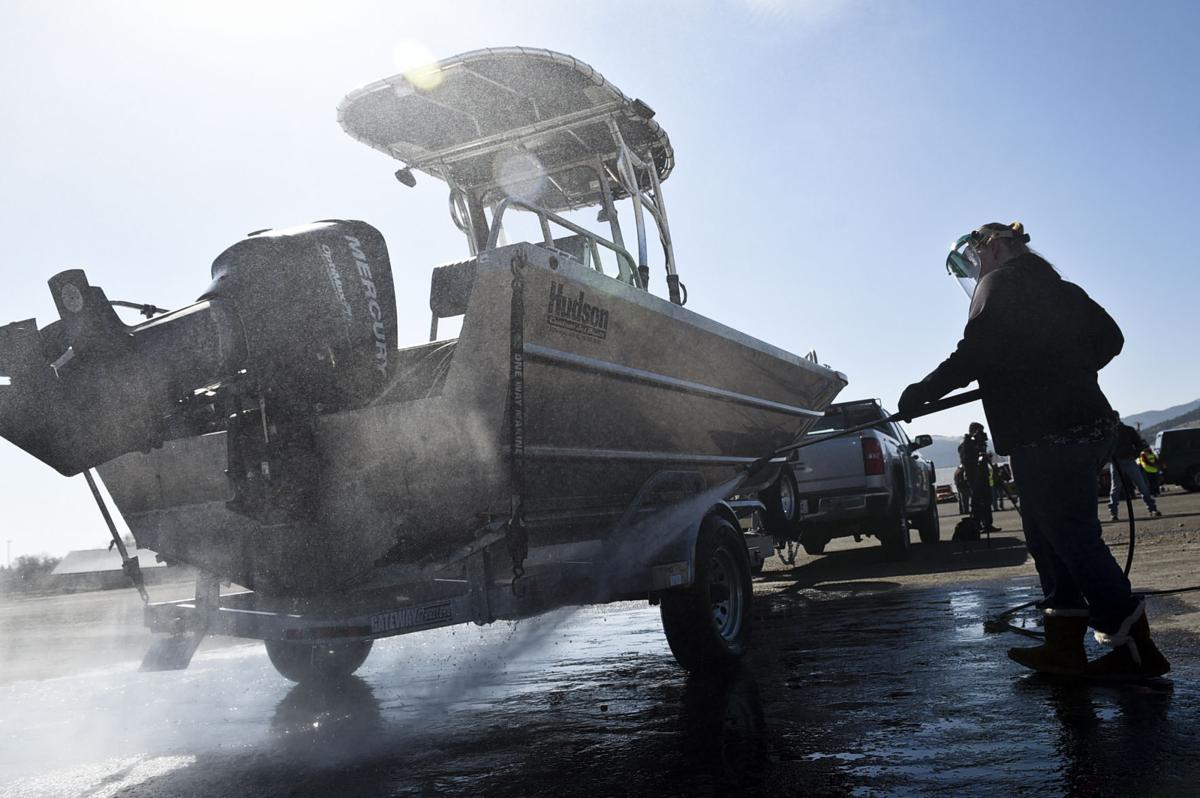 A watercraft inspector sprays down a boat using a decontamination station pressure washer.

LAKESIDE — The news was both good and worrisome for the crowd of Flathead Lakers.

Nearly 50 of the group gave up a night last week to hear the latest on the challenges facing the lake they’ve been working to protect since 1958.

The University of Montana’s Flathead Lake Biological Station Director Jim Elser offered the good news that the latest round of sophisticated DNA monitoring showed no evidence that invasive quagga or zebra mussels had set up shop in the pristine waters of Flathead.

But there was a caveat.

Despite the quick action that’s been taken since last winter’s discovery of larvae of the invasive mussels at Tiber and a suspected detection in Canyon Ferry last winter, Elser said there’s no way of saying for certain that an infected watercraft hasn’t been launched in Flathead Lake.

In fact, Elser said it’s probably inevitable that it either has happened or will someday.

Considering that, Elser said the worst thing that could happen is for people to just give up and refuse to play an active role in ensuring the destructive mussels don’t gain a foothold in the last uninfected major watershed in the country.

With their ability to reproduce quickly with devastating results to infrastructure for hydropower, recreation and municipal waters, Elser and Tom McDonald, the fish, wildlife, recreation and conservation manager for the Confederated Salish and Kootenai Tribes, said everyone who cares about the Flathead Lake drainage has a responsibility to do their part.

The Flathead Lakers honored CSKT with the group's annual stewardship award for the tribes’ quick response to address the threat of the new aquatic invasive species.

The tribes closed all water bodies, other than Flathead Lake, to motorized watercraft or watercraft launched from trailers, and required inspections of all boats using tribal waters. They inspected 3,900 boats at their Polson office and set aside $250,000 from mitigation funding to pay for a new position to lead the aquatic invasive species team and pay for additional efforts to keep mussels out of the watershed.

“We knew right from the beginning that this was very serious,” McDonald said. “There wouldn’t be an opportunity for a do-over.”

Education will be a key in keeping Flathead Lake mussel free.

The notion of cleaning, draining and drying a boat every time it’s moved from one water body to the next has to become as automatic as putting on a seat belt, McDonald said.

Those prevention efforts can make a difference.

After invasive mussels showed up in the Midwest, the states of Wisconsin and Minnesota took two different routes.

Wisconsin opted for the route of least resistance and didn’t make the effort to keep mussels from spreading. As a result, nearly every lake in that state is now infected.

On the other hand, in the State of 10,000 Lakes, Minnesota started an educational program and used other efforts to stop the spread of invasive mussels. As a result of that effort, only about 20 lakes in Minnesota have populations of mussels.

“Our lives and environment would change for the worse if invasive mussels gained a foothold here,” said Flathead Lakers president Steve Russo. “The experience in other states can teach us something.”

Efforts to inspect boats at the edges of the Flathead Basin are making a difference.

Russo said boaters are learning — sometimes the hard way — that the law requires them to stop at the inspection stations.

He told the story of one boater who zipped by the inspection station only to be pulled over a few minutes later by a Lake County sheriff’s deputy. The boater apparently told the deputy he didn’t have time for the inspection. The deputy replied that he had the authority to impound the man’s boat for 72 hours and fine him $500 for not taking the time.

“He decided to go back to the station,” Russo said.

Technology is also helping in the effort to keep invasive mussels from invading Flathead Lake.

While the state’s monitoring effort focuses on looking for mussel larvae, Elser said that method is actually a step too late. By the time there are enough larvae to collect, the invasive mussels have already reproduced and gained a foothold.

UM’s Yellow Bay Biological Station is hoping to be able to discover the presence of mussels by testing the lake’s waters for their DNA.

The station has some of the world’s leading experts in the technology that allows scientists to learn what species are present in water without ever actually capturing one. That technology continues to evolve to the point now that scientists at the Yellow Bay station are testing a monitor that cuts the time necessary to test samples from days to hours.

“Environmental DNA is really a mind-blowing capability that we now have available to us,” Elser said. “It’s the only way to find them before they have a chance to reproduce.”

If invasive mussels are discovered in the lake early, it offers a chance for people to keep their spread to a minimum. At a lake in New York state, scuba divers were used to harvest as many mussels as possible in the early stages of an infestation.

Elser said that effort has so far kept the mussels from spreading.

“There’s some that would say that it’s impossible to keep them out,” Elser said. “I’m worried that some in state agencies have taken that attitude. …Some believe that if one mussel larva finds its way into Flathead Lake, it’s over.”

But that’s not true.

For an infestation to occur, some things have to come together for mussels. There has to be a large enough concentration of them to procreate, reproduce and spread.

“It’s hard to be a mussel larva all by yourself,” Elser said.

That’s why early detection is so important.

The station collected 120 samples from 30 sites around the lake in December shortly after the discovery of invasive mussel larvae in the state. That was repeated again in April.

“There were no detections in the April sample,” Elser said. “That’s good news. … We will be repeating that again this summer and in the fall.”

McDonald said the 10-foot draw-down that happens every winter at Flathead Lake could turn out to be helpful in stopping small infestations of invasive mussels from gaining that foothold.

“There may have been little colonies that started in the fall and then were exposed during the winter draw-down,” he said. “If you look at the stats and the number of boats coming from all directions, you would have to think the lake has been exposed before. If you were a betting man and was asked which lake had the best chance for invasive mussels to appear, I think you would have to say Flathead.”

But now there’s been a paradigm change with the discovery of invasive mussels in the state.

McDonald said that’s why the tribes required that every boat owner was required to have their boat inspected before it could be launched on waters managed by the CSKT.

“It was meant to be a wake-up call to everyone,” McDonald said. “There were so many people who had never been through a check station. It was all new to them. We wanted them to see that it’s not a big hardship and have the opportunity to explain to them what is at risk.

“People were asleep at the wheel,” he said. “They needed to wake up. They need to know that they can’t be lazy boaters any more.”

Don't be the boater who brings mussels into Montana

Montana continues to target zebra and quagga mussels in an attempt to keep them out of our waters.

Watercraft inspector Ryan Dorvall gets a closer look at the hull of a boat on June 29, 2017, at the Silos decontamination station on Canyon Ferry Reservoir.

A worker holds an invasive mussel discovered on a boat over Memorial Day weekend.

A watercraft inspector sprays down a boat using a decontamination station pressure washer.