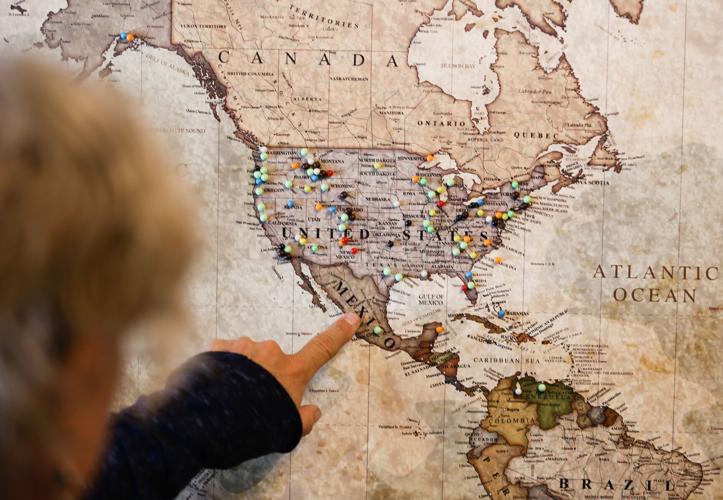 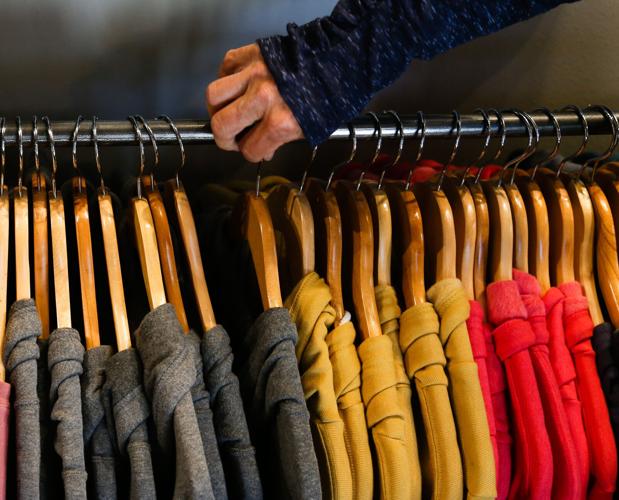 Marsha Hill picks a sweatshirt to show off during a tour of Pintler's Portal, a hostel in Anaconda on Wednesday, June 15, 2022.

The young woman and her fiancé launched their northbound trek of the Continental Divide Trail apparently wed to the hope of a happy future. But he soon chafed at his merely beloved’s slower pace and eventually abandoned her.

It seems beauty and heartache sometimes walk hand-in-hand on the nation’s most notable through-hike trails: the Continental Divide Trail, the Appalachian Trail and the Pacific Crest Trail.

Yet trekkers on the Continental Divide Trail who passed through Anaconda-Deer Lodge County in recent years more often expressed awe, wonder and gratitude. Many shared their appreciation with hand-written notes in the guest book at the Anaconda Trail Society's hiker hut at Washoe Park. Most entries were signed with trail names.

Some were NoBo (northbound). Some were SoBo.

About 65 miles of the path traverse the backbone of the Anaconda-Pintler Wilderness, which offers solitude, snow-capped scenery, abundant wildlife, cirques, chutes and tarns.

Some trekkers stumbled into Anaconda wet, weary and wobbly, seeking a break from the oft-rugged trail. For them, the unadorned hiker hut was like the Ritz-Carlton.

“We came down from Seward, Alaska, to SoBo the CDT because we’d been dreaming and hoping for it for more than a decade,” wrote Let’s Go. “Here we are and it is fantastic. Tremendous gratitude to Anaconda and the Anaconda Trail Society for this place of respite and resupply.”

Not everyone welcomes the backpacking visitors who leave the trail for an Anaconda sojourn after days bereft of soap and water. Yet other locals see them as tangible evidence of the Smelter City’s transition from industrial company town to a community celebrated for proximity to recreational riches. These residents extend warm welcomes.

“Often we hear the stories of the smelly hikers that inhabit our grocery stores, brewery and post office,” he said. “However, most of these hikers have jobs that allow them to take the time to hike the entirety or a large portion of the trail.”

The generally frugal trekkers do spend money while in Anaconda-Deer Lodge County, and many become ambassadors for the region.

A solo SoBo trekker wrote, “I’m totally blown away by your generosity and how cool Anaconda is. I’d love to come back to this wonderful town in the future.”

Diesel, headed SoBo, wrote, “Anaconda is the best town I’ve been in yet. Two people spontaneously got out of their cars to offer me help.”

“It's an exciting time in Anaconda,” Vauthier said. “We are seeing population and economic growth for the first time since the smelter closed (in 1980). Visitors and new residents are taking advantage of Anaconda's immense outdoor recreation opportunities.”

Decades ago, people moved to Anaconda for jobs at the Anaconda Company’s copper smelter. Those arriving during boom times were called “boomers.”

Today, many of the relative newcomers to Anaconda-Deer Lodge County have been lured by the region’s recreational opportunities – hiking, fishing, snow skiing, boating, horseback riding, snowmobiling, hunting and more. Some were preceded by relatives.

That was true for Matt Johnson and Emily Adams, who opened Anaconda Bicycles in April.

And that was true for Steve and Marsha Hill, who opened Pintler’s Portal Hostel in Anaconda in August 2021 after a substantial investment in a building that once housed a Masonic Lodge. The hostel is wedged between a liquor store and a hardware store.

The heartbroken fiancée found shelter, solace and support there.

For a time, the grieving woman secluded herself in her room at Pintler’s Portal. Steve said he, Marsha and the staff heard frequent bouts of weeping. He said they tried to respect her privacy but finally suggested that it might be good for her to get out of her room. For a time, she helped with painting at the hostel.

The Hills live west of Anaconda and can escape the role of hosts when their well of extroversion runs dry.

Still, Steve said meeting interesting people off the CDT is one of his favorite things about running the hostel.

“They are fascinating to talk to,” he said.

A NoBo couple in their 70s stopped while through-hiking the often rocky, challenging trail. Another apparently dedicated hiker displayed a tattoo on one thigh of the CDT route, Steve said.

Ultimately, he and the woman now free of her fiancé teamed up to hike north as a platonic pair. Steve said she was reluctant to hike alone and the tattooed hiker seemed like a nice man.

During the time when snow buries the CDT, Pintler’s Portal has housed a girls’ basketball team, a girls’ ski team from Alaska, a family from Sweden and more. Guests have hailed from Kenya, China, Indonesia, Romania, Iraq, Ukraine, Germany, Belgium, France, Argentina, Venezuela, South Africa and the Philippines.

Travelers can rent a bed, rent a room or the whole facility. Hikers passing through can pay $20 to gain five hours of access to Wi-Fi, showers and towels, the kitchen and laundry facilities.

Staff includes Hallie Zolynski, who manages recreational programming and other duties, Lisa Hlavaty, whose tasks include hosting, reservations and facility maintenance and cleaning, and Kryshelle Wittner, who coordinates social media and marketing.

Steve Hill is 69 years old. Marsha is 63. They have three daughters and one son. Steve, a geologist, retired from a consulting business that focused on environmental sites and remediation technologies. Marsha ran a business that sought consensus-based decision-making on low-trust, high-conflict issues.

During a brainstorming session over a glass of wine on New Year’s Eve 2019, the couple recognized that the region offered remarkable recreational opportunities. And the idea for a hostel was spawned.

“We’ve never done anything like this,” Steve said, smiling.

The facility appears to be spotless and reviewers have commented on the cleanliness at Pintler’s Portal.

A few blocks away, the hiker hut provides trekkers free access to Wi-Fi, loaner bicycles, lockers, a small refrigerator and small microwave and shelter from the storm, courtesy of the Anaconda Trail Society.

The gratitude for these small luxuries bubbles up like a Yellowstone hotpot. One hiker, who apparently also trekked the Appalachian Trail and the Pacific Crest Trail, wrote in August 2019: “In my entire Triple Crown, I’ve not yet seen or experienced a community-supported hiker resource like this.”

Vauthier said he and Bill Everett, chief executive officer of Anaconda-Deer Lodge County, are committed to supporting and growing a diverse economy.

A Missoula doctor who was initially charged with committing sex crimes against patients in Helena was sentenced Thursday to at least five years of state supervision as part of a plea deal.

“Montanans have the grit and fortitude to make a living wherever they reside. But they are not going to reside somewhere they cannot afford.”

A 34-year-old man from Colorado Springs, Colorado, was gored by a bull bison near Giant Geyser at Old Faithful on June 27.

The National Weather Service issued a flash flood warning for Lewis and Clark County until 9:15 p.m. Sunday, following a storm that dropped heavy rain and hail on the area.

By law, the emergency rule expires in 120 days. Thursday's hearing began the process of permanently adopting the rule.

A citizen initiative meant to curb rising home property taxes is dead for now after business groups and unions spent more than $300,000 in their campaign to keep it off the November ballot.

Blue Mountain Clinic, a family practice and primary care clinic in Missoula, said it will also limit who it can provide medication abortions to.

Unbelievable! This is the moment after a gunman opened fire in a crowd in Philadelphia 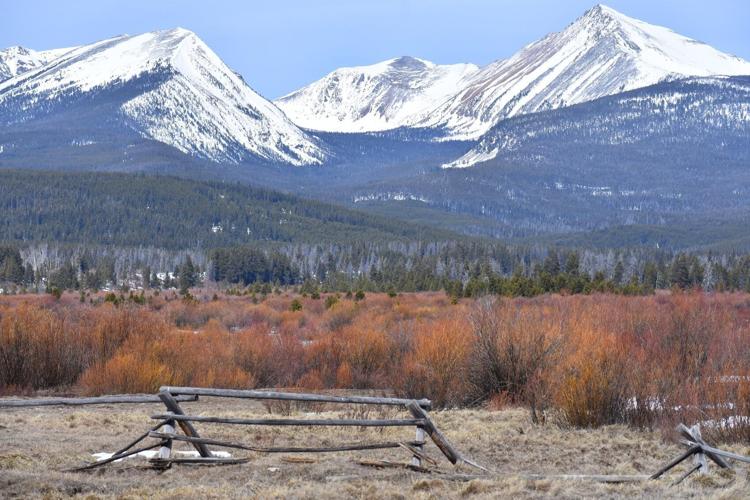 About 65 miles of the Continental Divide Trail pass through the rugged Anaconda-Pintler Wilderness. 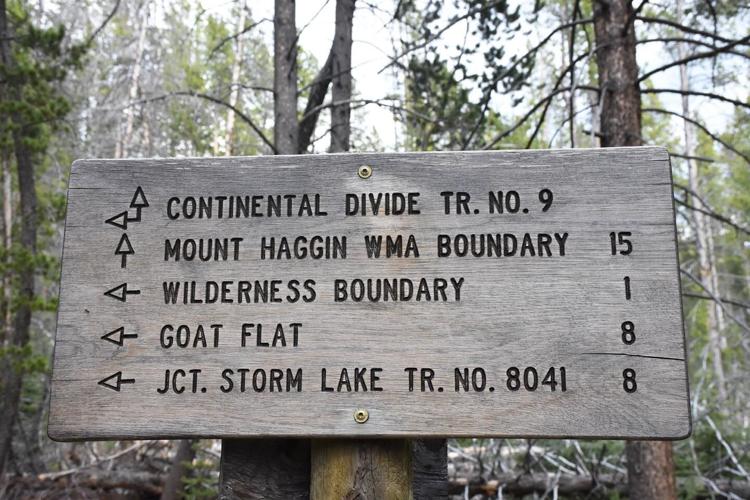 Roughly 65 miles of the Continental Divide Trail travels through the Anaconda-Pintler Wilderness. Through-hikers sometimes leave the trail for rest and relaxation in Anaconda. 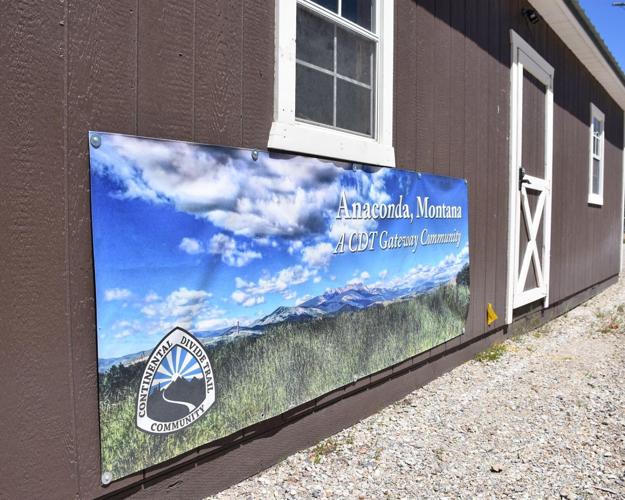 The Anaconda Trail Society's unadorned hiker hut at Washoe Park provides hikers a place to use Wi-Fi, loaner bicycles, lockers, a small refrigerator, a microwave and more, all free of charge. 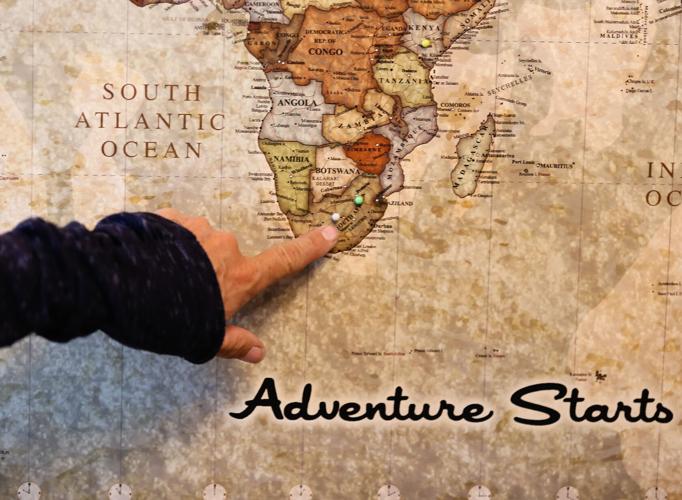 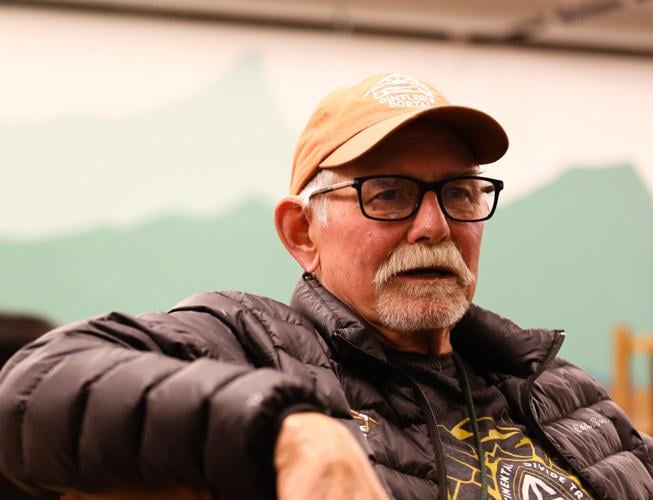 Steve Hill speaks during an interview at the Pintler's Portal, a hostel in Anaconda on Wednesday, June 15, 2022. 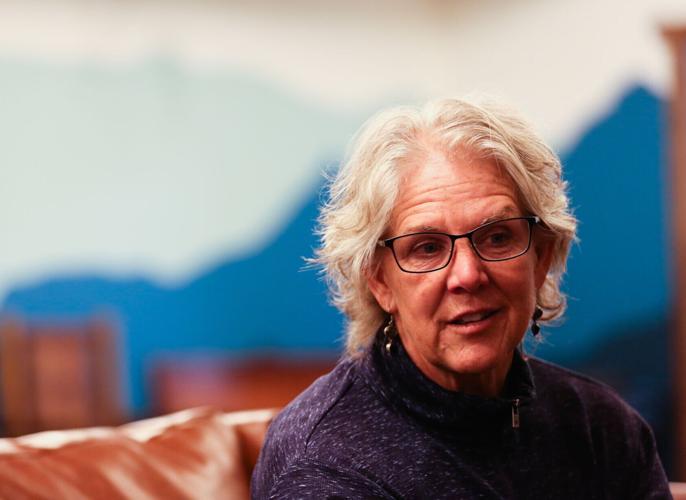 Marsha Hill speaks during an interview at the Pintler's Portal, a hostel in Anaconda on Wednesday, June 15, 2022.

Marsha Hill picks a sweatshirt to show off during a tour of Pintler's Portal, a hostel in Anaconda on Wednesday, June 15, 2022. 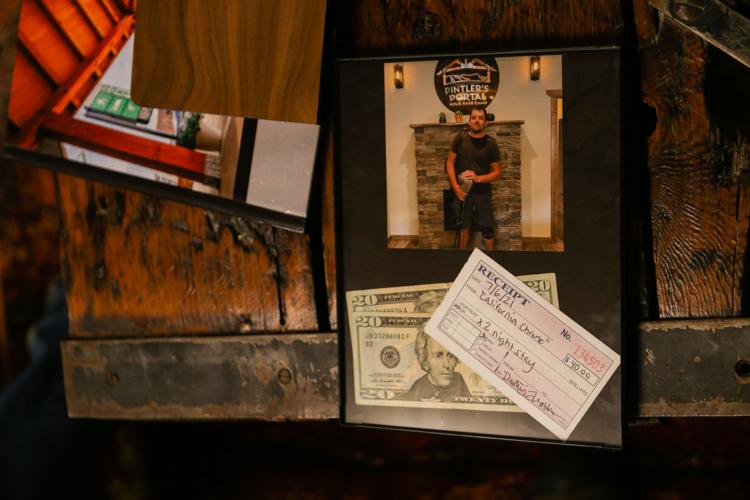