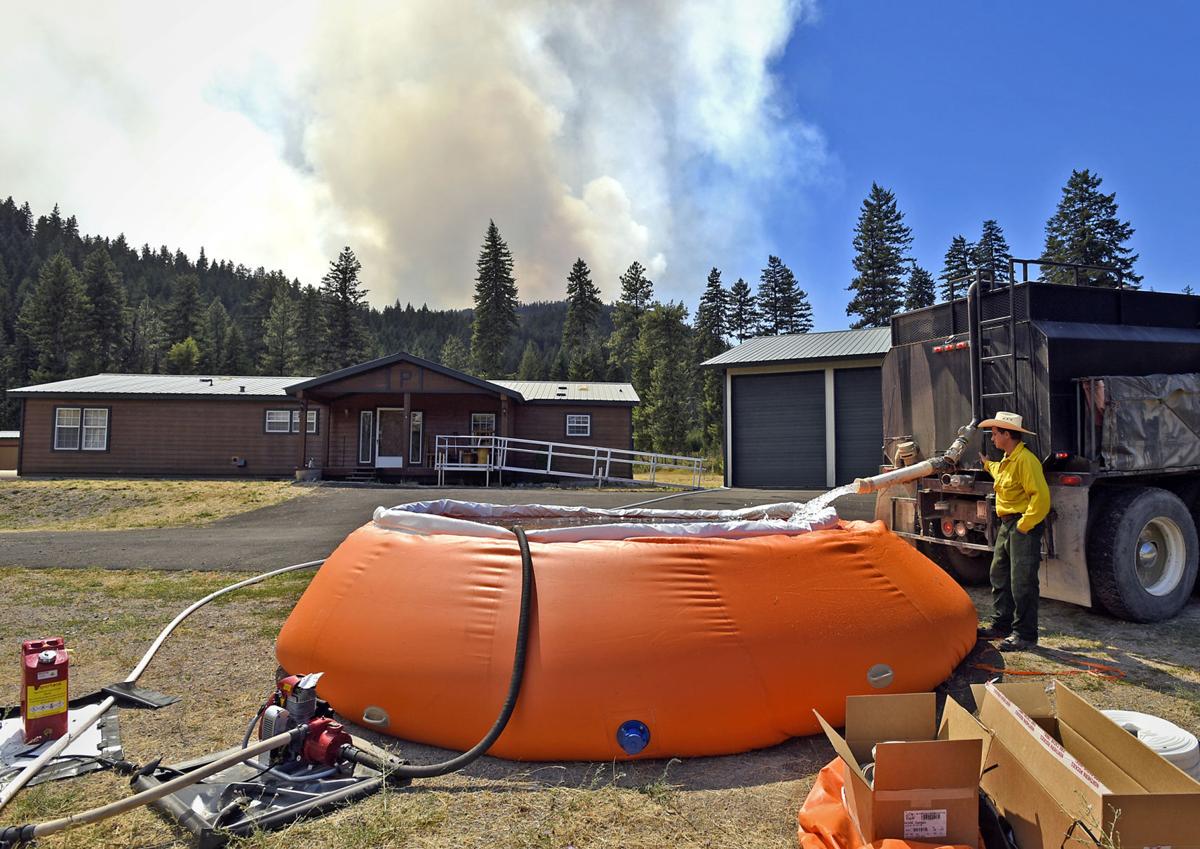 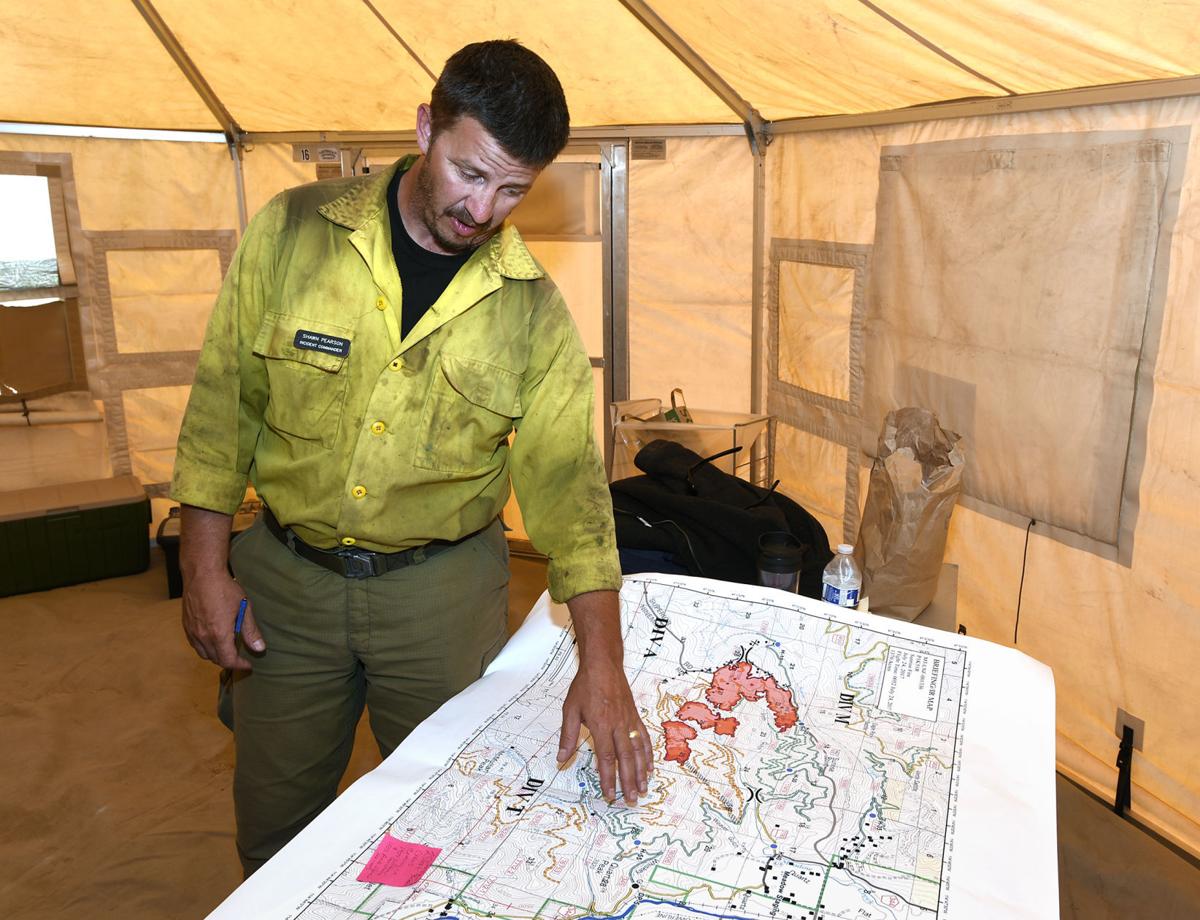 TARKIO — It’s no comfort to the people of Mineral County, but their fire is No. 2 in the nation.

The National Interagency Coordination Center in Washington, D.C., on Monday bumped up the Northern Region to top priority status and the Sunrise fire burning 11 miles southeast of Superior to the second-highest priority among all fires burning in the United States.

Residents and owners of 50 structures on three sides of the Sunrise fire were on standby evacuation status Monday afternoon as west winds kicked up into a red flag warning. Ground crews were pulled off ridgetop attack points earlier in the day.

“Right now it’s smoky and you can’t see the resources on the ground, which means they can’t see the aircraft above them,” said Shawn Pearson, incident commander of the Sunrise fire and the smaller Burdette fire 11 miles to the east.

The two grew to 1,370 acres and 540 acres, respectively, in steep, hard-to- access country overnight from Sunday to Monday.

The Sunrise fire was a little over a mile from several houses on Quartz Creek to the west, with one key ridge between them, Pearson said. Crews finished “plumbing” homes on Quartz Creek on Sunday and on Sunrise Creek on the Superior side Monday afternoon, then moved north toward the Clark Fork River and Quartz Flats. Sprinklers and porta-tanks of 5,000 and 6,000 gallons of water were engaged and filled at each home site.

“It’s a full suppression fire. We were given our walking orders. If we can get it out, they want it out,” Pearson said. “In the last two days we’ve received a lot of stuff.”

Two 20-man teams, one a Hotshot crew from Helena and the other a Hotshot crew in training from New Mexico, arrived Monday to join the Tatanka Hotshots from South Dakota, whose time ends Tuesday.

“We have a standing order for more,” said information officer Jill Cobb.

A Type I Sikorsky helicopter arrived at noon as attention shifted from the Quartz Creek side to the Sunrise and Quartz Flats sides due to a change in the wind. Both sides were susceptible as the winds again shifted from the southwest to the west later in the day. Gusts of up to 30 mph sent smoke billowing down the Clark Fork valley to the Ninemile and Jocko/Rattlesnake.

Meanwhile, smoke from the 750-acre Lolo Peak fire, still burning mostly within the northern boundary of the Selway-Bitterroot Wilderness, filled the lower Bitterroot and Sapphire Range with smoke.

Only the Lodgepole Complex Fire south of the Missouri River Breaks near Jordan was commanding more resources than the Sunrise and Burdette fires in Mineral County. That fire was approaching 300,000 acres on Monday with at least 22 structures lost. (See related story.)

Mineral County issued a Stage 2 evacuation notice for residents of Sunrise and Quartz Flats, after residents in Quartz Creek received the same notice over the weekend. Stage 2 means that residents should be ready to evacuate quickly if conditions worsen. Stage 3 means it’s time to go.

Pearson, whose Type 2 Incident Management team took over early Sunday from a Type 3 team from Missoula, said the Sunrise fire is burning in rugged country.

“The problem we’re having is access, trying to get up this terrible road and trying to get up on top early in the morning,” he said. “From the standpoint of the firefighters, it’s getting the heavy equipment out in front of them, so we can use those nippers, those dozers, the grapple skidders to get that fuel out of the way so crews can come in behind them because it is such nasty country.”

Rock Creek fires: Goat Creek, Little Hogback and Sliderock fires to the east of Rock Creek Road all had increased activity when the winds arrived Monday, though it was due more to the change of direction than wind intensity, according to information officer Gregg DeNitto.

A fourth fire commanded attention to the west of the creek in the Sapphire Mountains. Flames were detected Sunday afternoon near Cinnabar Point in the Welcome Creek Wilderness. Smokejumpers attacked the fire on Monday, and heavy air tankers and single-engine planes made water drops.

"It's not controlled at this point but it looks like we'll catch it before it gets very large," DiNitto said.

A "soft" road closure of Rock Creek Road and evacuation and pre-evacuation notices remained in place. Clinton and Missoula rural fire departments joined state Department of Natural Resources and Conservation and U.S. Forest Service crews to keep the Goat Creek fire in check. It has topped 1,300 acres. The Little Hogback is now over 2,100 acres, and the Sliderock was closing in on 400 acres.

A minor structure was destroyed Sunday in the Sliderock fire, the first such loss in any of the western Montana fires. A Hotshot crew was working to protect communications equipment at an electronics site shared by Granite and Missoula counties.

“We’re still kind of scrounging for equipment with a filler buncher, skidder and pretty much some kind of big iron task force on order,” information officer Mike Cole said.

The fire on Sunday reached the top of the Bitterroot divide and helicopter water drops worked Monday to keep it from spotting over to the Bitterroot Valley side, Cole said.

“Actually, in some places there’s still some snow if we could get it herded into the snowbank,” Cole said. “That was kind of crazy when I heard them say that.”

As of Monday morning, 106 firefighters were on the Lolo Peak fire.

Fire managers on Monday raised fire danger in Missoula County to extreme, just a week after raising it from high to very high. On Tuesday, Missoula County commissioners are expected to approve an emergency proclamation to impose Stage 2 fire restrictions, prohibiting all fires and the operation of welding or acetylene torches with an open flame; limiting smoking to enclosed vehicles or buildings; and the operation of motorized vehicles off designated roads and trails.

Stage 2 restrictions will be in place at 12:01 a.m. Thursday in Ravalli County and the Bitterroot National Forest.

The restrictions come as numerous fires continue to burn in the Bitterroot and Sapphire mountains, and after a spark from a swather appears to have caused a small fire near Stevensville Saturday afternoon.

“It’s hot and dry out there, and it’s only July,” said Tyson Chambers, Stevensville’s rural fire assistant chief. “We’re kind of afraid of what August might bring.”

Sunrise fire near Superior continues to be worrisome

TARKIO — The Sunrise fire to the west of here dropped one position, to third, on the national priority list of wildfires Tuesday but that did …

TARKIO —  The Sunrise fire grew about 1,000 acres to 3,700 acres on Thursday morning, according to public information officer Ted Pettis.