Superintendents from Montana’s eight AA school districts have banded together and penned a letter to state Superintendent of Public Instruction Elsie Arntzen to express their disappointment with her leadership, citing nine specific examples. 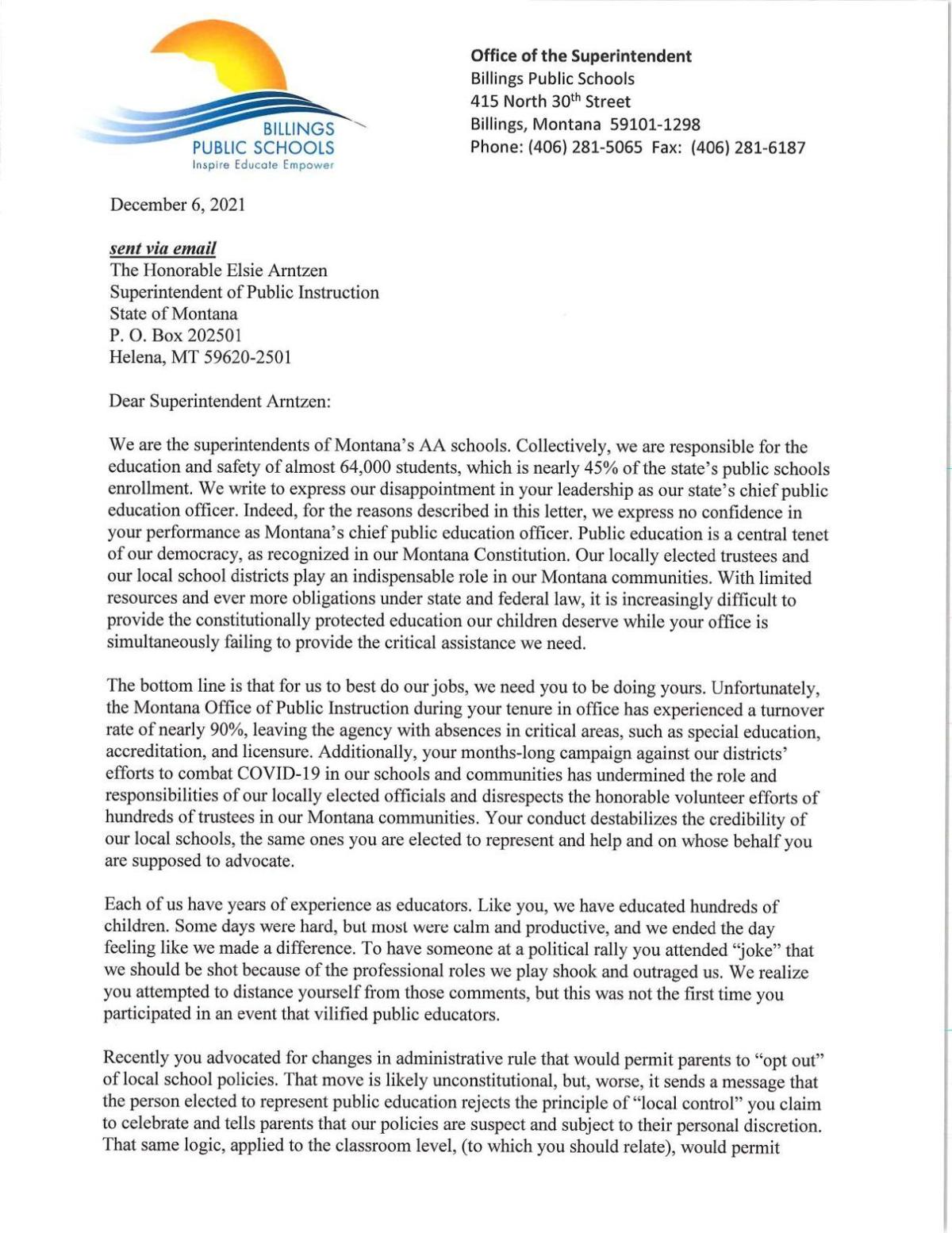 “The bottom line is that for us to best do our jobs, we need you to be doing yours,” the superintendents wrote in the letter.

Many of the problems revolve around the state Office of Public Instruction’s 90% staff turnover rate under Arntzen’s watch, the superintendents wrote.

The high turnover rate has resulted in “serious deficiencies,” such as lack of support from Arntzen’s office when it comes to applying for programs and grants, while some important departments at OPI are either understaffed or without a director, according to the letter.

“While we understand the mantra of ‘cutting the fat out of government,’ the steps you have taken effectively left no muscle in our state’s education agency,” the superintendents wrote.

Arntzen is taking the concerns and feedback "humbly and seriously," she said in a response sent Tuesday.

"At the heart of everything we do, our collective mission is to always put Montana students first," Arntzen said in her reply. "To do that, it's imperative that we have unity and ongoing support readily available for our students, teachers, administrative staff and school districts."

Arntzen likened the challenges at OPI to "growing pains of pandemic change."

"While we have multiple touch points of communication with school districts and their leadership each month, your letter has made it clear that it's not enough," Arntzen continued. "I welcome increased mutual dialogue."

The superintendents criticize Arntzen’s “months-long campaign” against school districts’ COVID mitigation strategies, which they note is undermining the role of elected school board trustees and local control.

They also note a meeting Arntzen attended at a local church in Missoula where a comment was made about shooting superintendents in relation to disagreements over mask policies. Arntzen was not in the room at the time of the comment, and later condemned the remark.

“To have someone at a political rally you attended ‘joke’ that we should be shot because of the professional roles we play shook and outraged us,” the superintendents wrote. “We realize you attempted to distance yourself from those comments, but this was not the first time you participated in an event that vilified public educators.”

At that same meeting, Arntzen announced that her office was in the process of creating an administrative rule that would allow parents to opt out of certain school board policies. The superintendents in the letter call the proposed rule “likely unconstitutional” and fear that it could allow students to declare themselves exempt from lessons, tests and grades.

“To be clear, our concerns are not related to your politics, but rather your leadership (or lack thereof),” they wrote. They also said they do not wish to place blame on the “dedicated staff at OPI, who we know are doing the best they can with what they have been given.”

In terms of unlicensed educators, the superintendents express their frustration with the “backlog of applications at OPI and not enough staff to effectively process the applications in a timely manner.” It is their understanding that OPI’s licensure department is not taking any calls and is about a month behind on responding to emails.

Teachers being unlicensed can result in educators not being paid in a timely manner, as state law prohibits districts from paying teachers after working 60 days without a license on file with the county superintendent. The superintendents fear this issue with licensing could deter teachers from pursuing employment opportunities in Montana.

The Montana State Educator Information System, which is involved with teacher licensing online, will be shut down to the public at the end of the year, according to the OPI website. Teachers who have open applications or need to renew their licenses will have until Feb. 1, 2022, to submit paper documentation. There is no mention of when the system will be launched to the public again and a link to the MSEIS FAQ leads to a Google Doc with OPI letterhead that says, "MSEIS FAQ’s will be added shortly.”

“This is unacceptable at the best of times, much less when the state is facing a critical shortage of licensed educators, as you yourself have said many times,” the superintendents wrote.

The superintendents claim there are no plans going forward to update Montana’s content standards and feel that the topic is “not a priority” of Arntzen’s. Outdated content standards are a “disservice” to students and cause districts financial uncertainty, they said.

Montana’s content standards can be found online at OPI’s website. Updated standards for career and technical education, computer science, library media and information literacy, technology and social studies have all been in effect as of July 1 of this year.

However, many core pieces of the curriculum need to be dusted off.

The OPI does not have a state special education director at this time, which has resulted in poor communication between the department and local school districts across the state, according to the superintendents.

“Due to high turnover of staff at OPI, we have lost some of the long-standing connections we had with OPI staff,” the superintendents wrote. “Special education is one of those high-risk areas where districts, especially districts without dedicated compliance staff, can get into trouble in a hurry if they cannot rely on technical assistance from the state education agency.”

Similar problems exist with OPI’s accreditation office as well, according to the superintendents, which now falls on just one person with “hundreds of school districts needing annual accreditation reports.”

“We respectfully ask you, as a Montana educator, to please take our concerns to heart and put your efforts towards restoring OPI instead of throwing rocks at local school districts,” the superintendents wrote in conclusion.

More precipitation is expected over the next seven days and temperatures will dip below freezing as the week progresses.

The demonstration, part of the international Day With(out) Art, shrouds works of art and replaces them with information about HIV and the AIDS epidemic as a means to raise awareness.

Brauenbären, which means “brew bears,” is a German-style hefeweizen crafted by students in collaboration with brewers at Draught Works.

In the Monday statement, Rhoades said that he became aware that the "thoughtless quip" may have caused some in the education community to feel unsafe.

“These types of comments serve no purpose in championing parent voice in our public education arena,” Arntzen said in the statement Wednesday.

'It is time we voice our dissent': Four more school superintendents criticize Arntzen

“As a school district we really can’t do our work and the work that we need to do without the support of the community, and that’s obviously what we’re seeing today,” said MCPS Superintendent Rob Watson.

In early December, the superintendents penned a letter to state Superintendent of Public Instruction Elsie Arntzen to express their disappointment with her leadership.