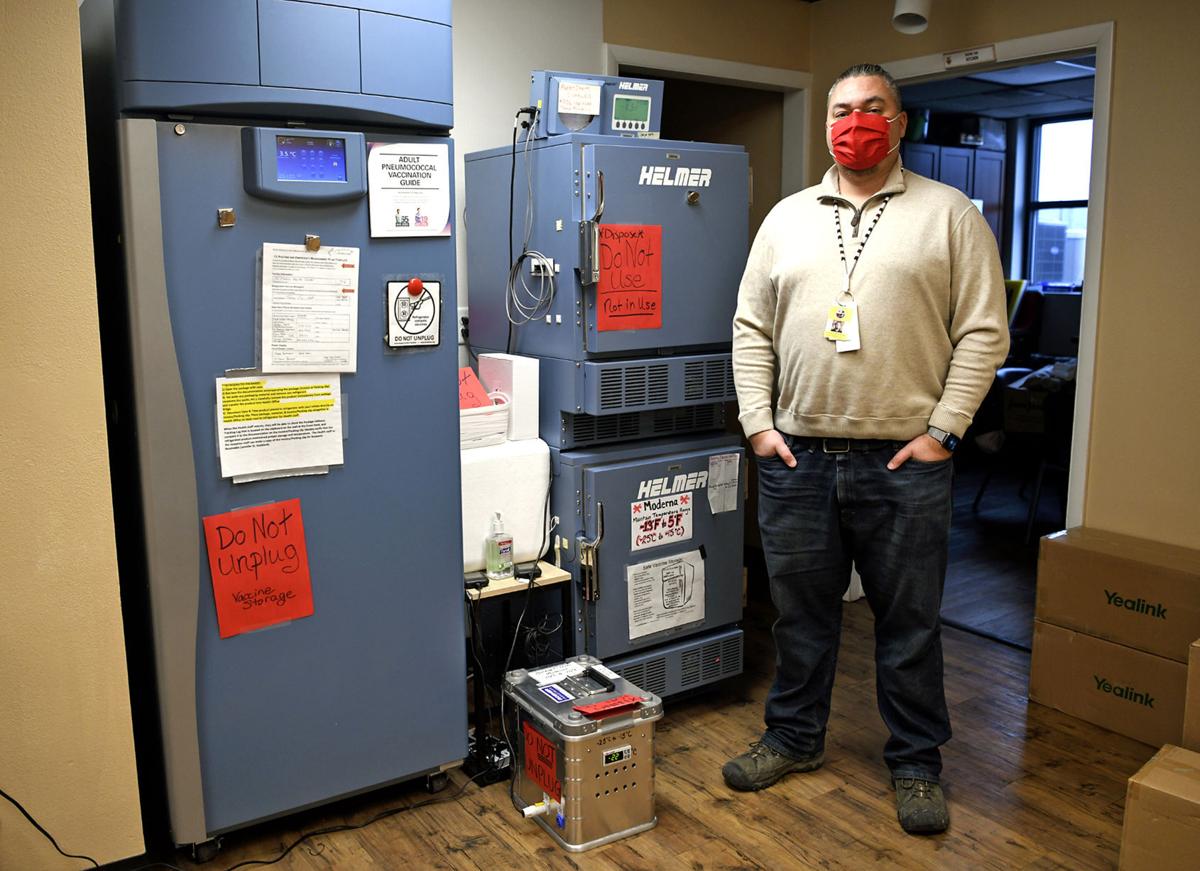 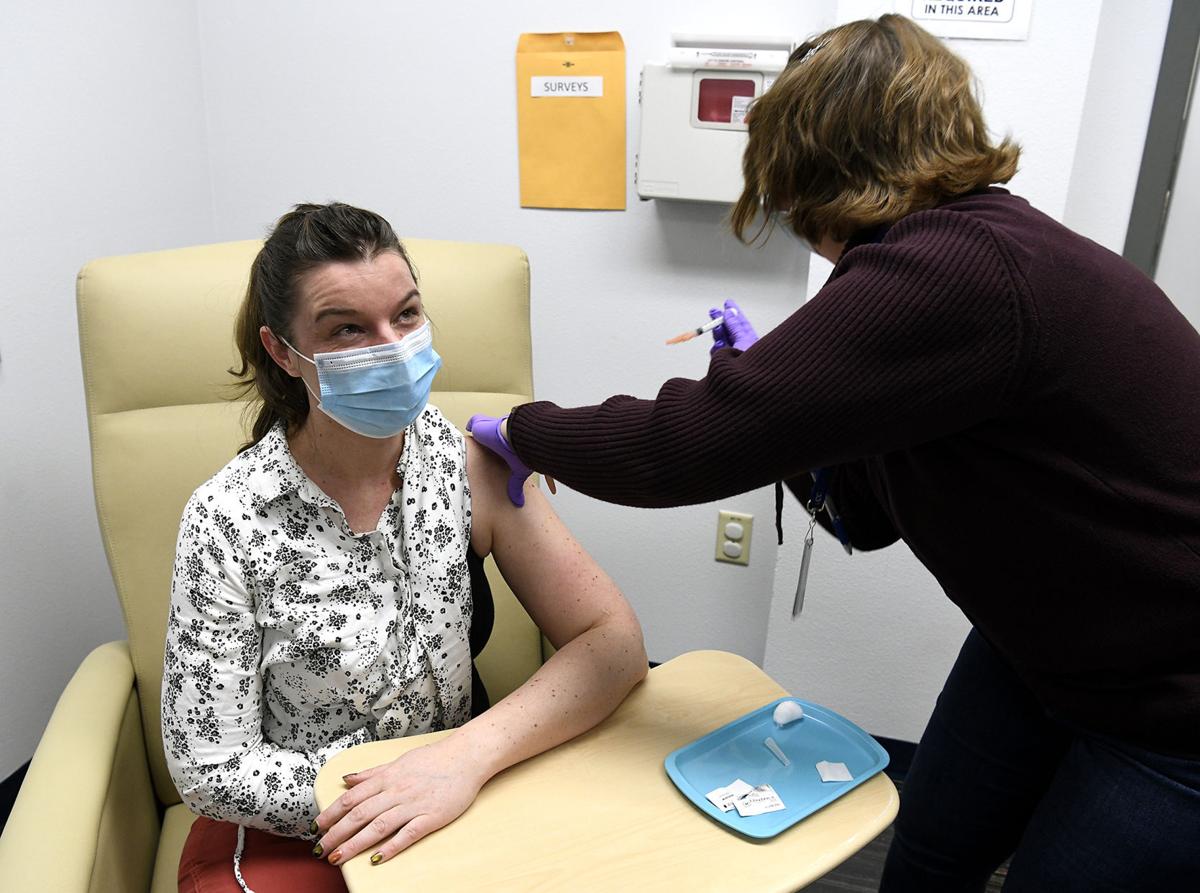 Jessi Marcinek, a registered nurse at The Birth Center, gets a COVID-19 vaccination from Heidi Watson, RN-BSN, right, on Thursday at the Missoula City-County Health Department. The department is currently vaccinating staff and unattached health care workers. 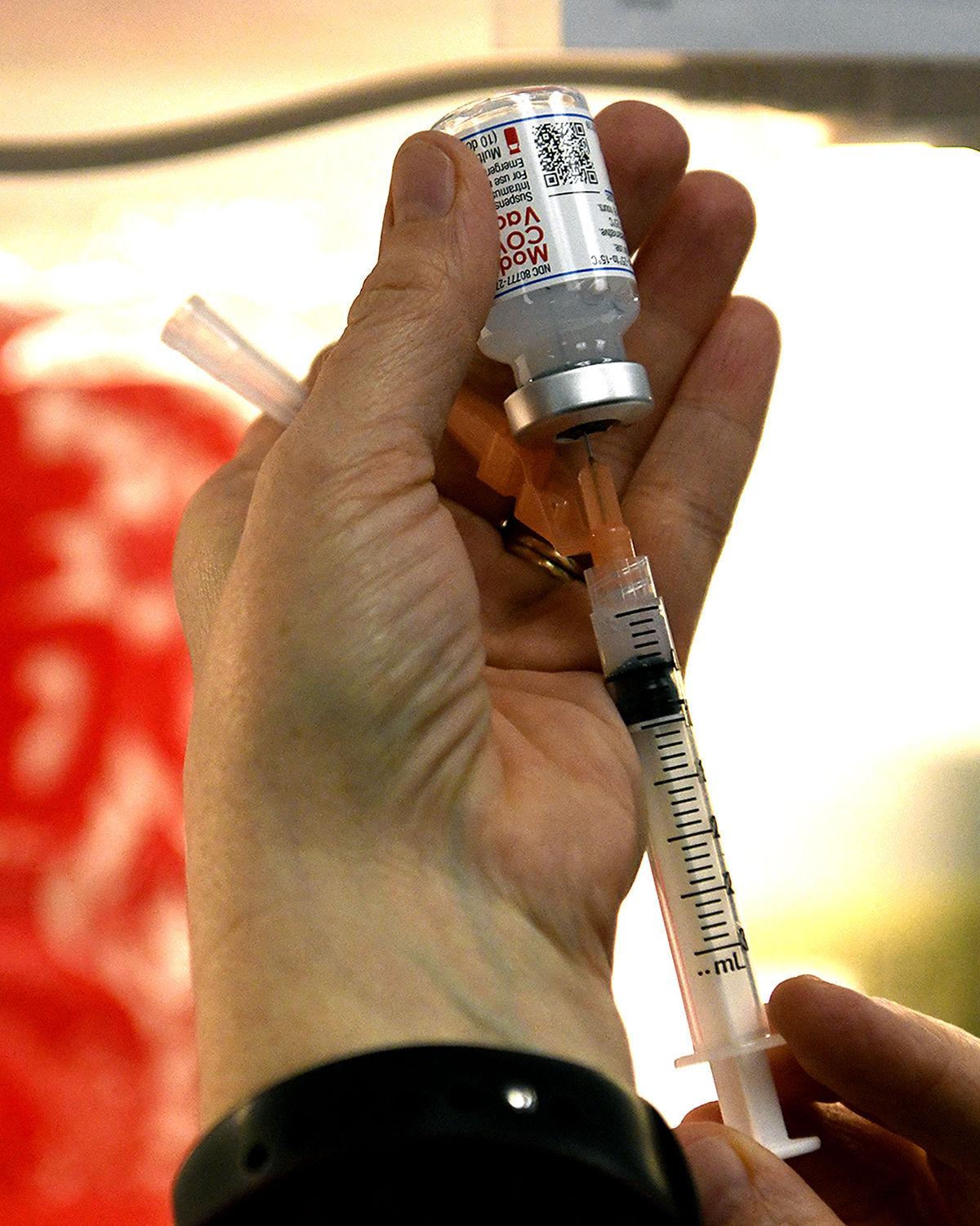 Heidi Watson draws a dose of the Moderna COVID-19 vaccine in January at the Missoula City-County Health Department.

D’Shane Barnett didn’t even feel the poke when he got his COVID-19 vaccine Tuesday.

“I was actually trying to do a video to promote vaccine usage among the Native population and I didn’t even realize she had already stuck me,” Barnett said.

Compared with other vaccinations he’s gotten, Barnett said the Moderna shot was hardly noticeable because of how small the needle is. Barnett is the executive director of the All Nations Health Center, previously known as the Missoula Urban Indian Health Center. He was among a group of 33 people who got their shots at the center on Tuesday. He still posted a video of himself getting the vaccine to his Facebook page.

Transparency was a huge part of the All Nations Health Center’s rollout of the COVID-19 vaccine. Barnett, who is Mandan and Arikara, encouraged his staff to share photos of themselves getting the vaccine. The pharmacist who gave the vaccine to the Center’s staff is a member of the Blackfeet Nation.

What he hopes this will show is that vaccination isn’t something being done to Native Americans. It is being done by them to protect “Native health and for the love of Native people in our community,” Barnett said.

As dozens of health care providers in the Missoula community and across the state receive the Pfizer and Moderna COVID-19 vaccines, experts are considering how best to approach vaccine hesitancy among the public. According to several polls conducted in November, the majority of Americans are willing to get a vaccine once it is available. However, some populations are reluctant.

Dennis Yi Tenen is a professor at Columbia University who studies the intersection of language and technology. Right now, he is looking at vaccine hesitancy in online communities.

Vaccine hesitancy is often considered a problem with what information people are consuming, Yi Tenen said. Health officials believe the solution to this is to continue to give people more science and more proof a vaccine was effective.

But what his team is observing is that people are hesitant to take vaccines for all sorts of reasons. And sometimes, they’re quite well-informed about the vaccines. So giving them more science might not address their concerns. People object on political grounds, on religious grounds and because of complicated histories with the medical community.

Yi Tenen doesn’t like to use the term “anti-vaxxer” because some of the concerns raised in these communities are really legitimate. A good example is the distrust surfacing in some of Montana’s Native American communities.

Congress has acknowledged instances of unethical medical practices and experimentation on Native American and Alaska Native communities. A stark example of this was brought forward in 1974 when Dr. Connie Pinkerton-Uri, Choctaw and Cherokee, found that one in four Native American women had been sterilized without consent, according to a timeline by the National Library of Medicine.

This history is why Barnett took a transparency approach. What has changed between 1970 and 2020 is how many Native American doctors, epidemiologists and pharmacists are working today, Barnett said.

“Almost every atrocity that’s ever been committed against Native people — by the United States’ government, by American medicine – there have not been Native experts at the table,” Barnett said. “And that is what has changed.”

Native Americans are now working at the National Institute of Health. These educated Native professionals are the people Barnett is trusting. Not to mention his own knowledge. Barnett is getting a doctorate in public health and researched the safety and efficacy of the vaccine.

The messaging does need to take culture into account, Barnett said.

Barnett took it as a “win” when he found the All Nations Health Center’s staff vaccine refusal rate was the same as that of a non-cultural-specific local health center. Some of the staff refused because they’re young and healthy and it is a precious resource, Barnett said. He acknowledged some staff members refused out of concern about whether the vaccine was safe.

“The fact that we see Native people accepting the vaccine at the same rates as non-Native people I think is a huge win, because historically it would not have gone that way and I do think it has to do with the approach we’ve taken,” Barnett said.

All Nations Health Center got 100 vaccine doses and used 33 to date. The next group they plan to vaccinate are high risk individuals and elders in Native American communities.

Yi Tenen’s belief is that the way to help change minds about vaccination is to micro-target communities across the country in a similar way to Barnett’s strategy.

His team will collect the conversations of people in vaccine-hesitant communities online and then analyze what is being said to try to understand the reasons behind the hesitancy. Step one is to observe and understand. Step two is to help craft outreach campaigns based on the data about these conversations.

The goal is to be as scientific with the messaging about the vaccine as researchers were about its development, he said. Because both are important. All of the physical challenges of getting a vaccine to people, such as keeping it at the right temperature and away from light, won’t matter if officials can’t address the ideological component of not wanting to take the vaccine.

For the vaccine to be effective, a large number of people need to be willing to get it.

“For example, measles: Last year the U.S. was in danger of losing its measles immunity status,” Yi Tenen said. “We’d like to make sure the same doesn’t repeat with COVID.”

Individual health care workers are speaking out about their experiences with the vaccine as well, and posting about it on social media.

Donita Fatland is a clinical lab assistant at St. Patrick Providence Hospital. She posted a photo of herself getting the vaccine on Instagram on Dec. 21. She handles test samples but also draws blood from patients and is exposed to patients with COVID-19 as part of her work. The night she got the first part of the vaccine, people were sobbing and applauding.

“There was such a feeling of just absolute elation in the room,” Fatland said.

Fatland brought an EpiPen with her, but didn’t end up needing it. She said it was one of the easiest vaccinations she’d ever had.

She hopes people will take advantage of the vaccine. It is disappointing to her that some people she works with refused the vaccine and some to this day don’t believe COVID-19 is as deadly as it is, Fatland said.

“I debated myself when I got the first shot about making it a statement,” Fatland said. “And I’m not a big social media user, but I felt so strongly about it that I wanted to take a selfie of the happening of the vaccine. If I can be a spokesperson for that, I would be more than happy to.”

Not all her coworkers refused the vaccine out of distrust. One previously had a bad reaction to a flu vaccine and even though research showed none of the things they’d reacted to in the flu vaccine were in the COVID-19 vaccine, they didn’t feel comfortable taking it. Another coworker previously contracted COVID-19, and they are waiting to get the vaccine until it is more widely available. Some colleagues are waiting to see how the vaccine affects others. Some have to wait because of the limited supply, Fatland said.

Cody Donaugh is a patient safety sitter at Community Medical Center as well as a pharmacy student at the University of Montana pursuing a master’s degree in Public Health. Because he works directly with COVID-19 patients, he was given the opportunity to get the vaccine. He expressed his own doubts in the ethics of pharmaceutical companies, but that didn’t stop him from wanting to get the shot.

He considered it his responsibility, because of his work.

“I understand that people are scared; people are afraid right now, and I was there too,” Donaugh said. “And I’m doing my part to help to get this over with as quickly as I can and I hope other people do the same.”

He hasn’t had any adverse effects from the vaccine dose on Dec. 18. He is scheduled to get his second shot, the booster, in January.

Thousands of people are being vaccinated right now, said Cindy Farr, incident commander for the Missoula City-County Health Department's COVID-19 response team. For those who are nervous about the effectiveness or the safety of the vaccine, she encouraged them to continue to watch the research coming out about those who have been vaccinated.

Missoula’s local government health agencies got about 300 vaccine doses, which they are using to vaccinate unattached healthcare workers and health department staff.

So far, research is showing that it is completely safe, she said.

Montana lawmakers to look at how prisons affect legislative districts

A Montana State Prison guard will represent the disenfranchised prison population he oversees in the upcoming 2021 Legislative Session.

Neither pink nor bear, Christmas calf greets all at Pink Grizzly

Customers who stopped by the Pink Grizzly this week might have gotten to meet Noel, a Scottish Highland cow barely a week old.

A doctor who helped prepare Missoula for a pandemic years before COVID-19 died at his home on Dec. 12 from pancreatic cancer.

“That is something I did say to the law and justice committee one time,” Arciga said. “I said, ‘I am good enough to build your houses, but not to live in one of them.”

A 22-year-old man charged with killing his father is being held in Missoula County Detention Facility in place of a $2 million bond.

The State of Montana must pay Lolo Liquor at least $5 million after it passed a bill that violated the terms of the store’s franchise agreement.

A Columbia Falls man died on Sunday in a two-vehicle crash in Hungry Horse, Montana.

Three residents at the Missoula Pre Release Center have tested positive for COVID-19.

The Fort Belknap Indian Community was happy President Joe Biden kept his promise to rescind the permit for the Keystone XL pipeline, saying it…

A Missoula judge Monday ordered the Evaro Bar and Casino to comply with COVID-19 restrictions or face closure.

With the lifting of a state mask mandate and infection numbers trending down, Missoula officials may soon relax some local pandemic restrictions.

Stay-at-home orders and mask mandates helped the Blackfeet Tribe crush a second wave of COVID-19 infections and led to reopening the Blackfeet Indian Reservation to public travel this spring.

Jessi Marcinek, a registered nurse at The Birth Center, gets a COVID-19 vaccination from Heidi Watson, RN-BSN, right, on Thursday at the Missoula City-County Health Department. The department is currently vaccinating staff and unattached health care workers.

Heidi Watson draws a dose of the Moderna COVID-19 vaccine in January at the Missoula City-County Health Department.