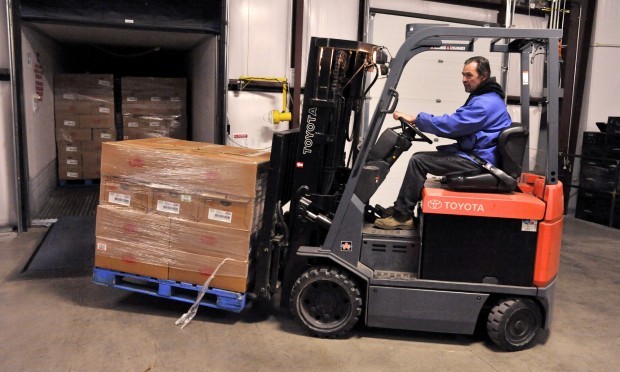 Warehouse staffer Chuck James operates a forklift on Tuesday morning at the Montana Food Bank Network in Missoula while unloading a semi-truck carrying about 15 tons of frozen chicken donated by Tyson Foods Inc. 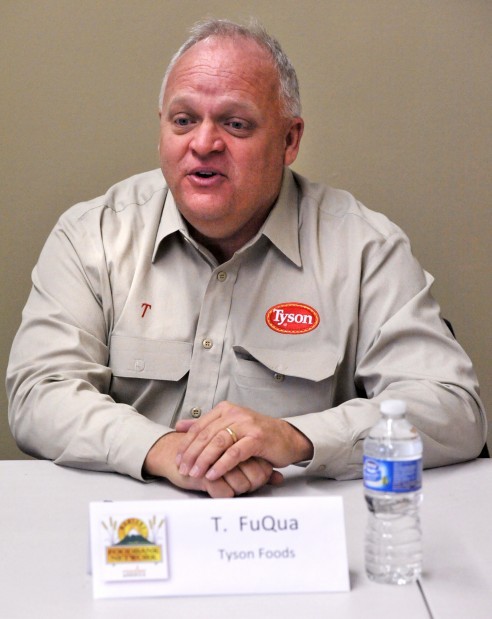 By CHELSI MOY of the Missoulian

"Our shelves are beginning to thin out," she said.

Significant reductions in state support this year have made getting food to hungry Montanans more challenging. That's why places like the Montana Food Bank Network, an organization that provides food to pantries statewide, are enthusiastic about Tuesday's donation of 15 tons of chickens by Tyson Foods Inc., a multinational food company.

Lewis, who has a residence in the Bitterroot Valley, shares a love of music and golf with John Tyson, chairman of Tyson Foods. Their friendship led to Tuesday's major delivery of a truckload of frozen chickens.

"I'm thankful for my friendship with John and his willingness to help feed people in need here in our state," Lewis said in a released statement. "Like many other parts of the country, hunger is a serious concern here, especially with rising food and fuel costs."

Two drivers from North Carolina traveled 2,300 miles and arrived in Missoula with the truckload of chickens at 6 a.m. Tuesday morning before continuing on to Washington state, said T. FuQua, a Tyson representative.

The chickens, in addition to the cost of freight, equal a value of $70,000, said Montana Food Bank Network's Chief Financial Officer Clark Tower. The chickens consist of enough protein for 120,000 meals. Plus, it's a good source of iron, which is important for hungry moms and children, he said.

"The key to stopping hunger is these local programs," said FuQua, who added that Tyson has donated about 8 million pounds of provisions to food pantries nationwide over the last decade. This truckload was the only one this holiday season.

The Missoula Food Bank Network helps stock the shelves of 200 food pantries statewide. This is the organization's first large truckload donation this year, Grimes said. Last year, the food bank network delivered 8.4 million pounds of food to help feed the hungry statewide. As the year's end draws near, the network is optimistic about meeting that same amount, but is slightly behind at this point, Grimes said.

The reduced funding led to six layoffs last year at the organization, including a truck driver and warehouse employee. The network employees 16 people. That leaves it with one truck driver traveling 10,000 miles a month driving 13 routes. Of the Montana Food Bank Network's $1.5 million budget, three-fourths of that money comes from private donations.

The Montana Food Bank Network uses donations and its strong buying power to purchase food. It has the ability to provide eight meals for a $1, Grimes said.

Anymore, the organization relies more on its thousands of donors who give money and the corporations and small businesses who can offer food items, similar to the 30,000 pounds of chickens Tyson delivered Tuesday.

"Protein items are so hard to come by, so this is a huge impact," Grimes said. "Maybe a small family can use chickens opposed to a turkey for Christmas."

The shipment of chickens will be distributed across the state beginning Friday, hoping to make it into food pantries and then into needy families' homes by the Christmas holiday.

Reporter Chelsi Moy can be reached at 523-5260 or at chelsi.moy@missoulian.com.

The surge of COVID-19 in Montana continues to swell.

“COVID is more harmful than the vaccine at any point in pregnancy, at any point post-partum, for both you and the baby,” Dr. Bradley Holbrook said.

State breaks record for most hospitalized with COVID-19

There were 510 Montanans reported hospitalized Wednesday morning, topping the previous high of 506 last November, before a vaccine was available.

Woman gets 40 years in strangling death of Dillon man

DILLON — A judge sentenced 21-year-old Sandy Rose Moore to 40 years in the Montana Women’s Prison on Tuesday for strangling an older boyfriend to death in a rental home they shared here.

The recovery of elk populations in Montana has now led many of the state’s hunters and landowners to a crossroads, a divisive debate over how best to manage this wildlife wealth.

The bears had not gotten into any conflicts before reports came in the last few days that they entered the dumpsite operated by Park County through an open gate near Chico Hot Springs.

Idaho officials will make available up to $200,000 to be divided into payments for hunters and trappers who kill wolves in the state through next summer.

Gabby Petito died three to four weeks before her body was found Sept. 19 near an undeveloped camping area along the border of Grand Teton National Park in remote northern Wyoming.

The property is listed for sale at $14.75 million.

A young bull moose was illegally killed by an archery hunter in the Charles M. Russell National Wildlife Refuge around Sept. 4 and its antlers were later sawed off.

Warehouse staffer Chuck James operates a forklift on Tuesday morning at the Montana Food Bank Network in Missoula while unloading a semi-truck carrying about 15 tons of frozen chicken donated by Tyson Foods Inc.