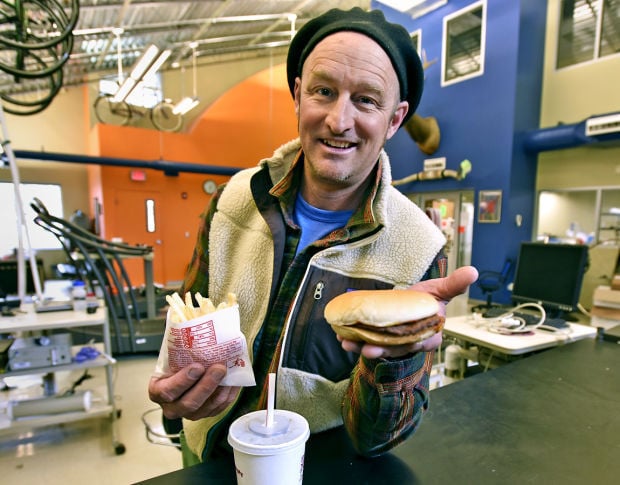 Brent Ruby, director of the Montana Center for Work Physiology and Exercise Metabolism at the University of Montana, led a recently published study that found that a regular hamburger, french fries and a Coke are just as effective as expensive energy supplements in helping athletes recover from intense workouts. The study found that glycogen recovery from the tested fast food items was comparable to sports energy products designed to do the same thing. 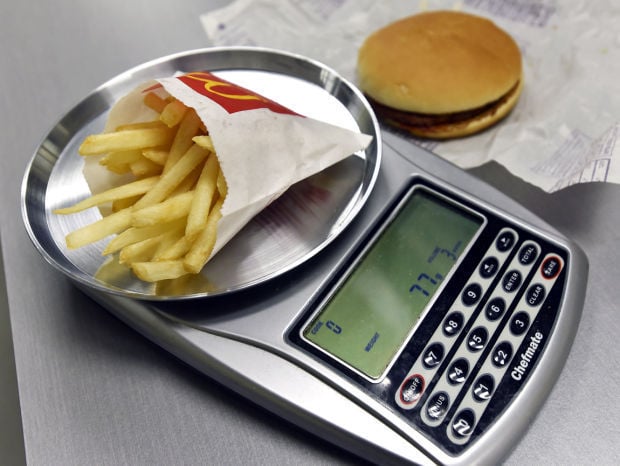 Ruby said factors like weight, nutritional value and calories of all the products tested were monitored during the study.

Set the PowerBar aside and bring on the burger and fries from McDonald's.

A recent study conducted by the Montana Center for Work Physiology and Exercise Metabolism at the University of Montana concluded the fast food option, in a small dose, was just as effective for muscle recovery as energy bars and sports drinks.

Another study outcome? The lead researcher is getting more grief than gratitude from some fitness freaks.

"It's like I've committed some sports nutrition sin that people just can't get over," said Brent Ruby, director of the center at UM's Department of Health and Human Performance, and consumer of burgers after Iron Man competitions.

An article based on the study was published in a recent issue of the International Journal of Sport Nutrition and Exercise Metabolism, and Ruby knows what you're thinking. No, the research was not funded by McDonald's.

"If they did, I would have included big red shoes in the budget," Ruby said.

A representative of PowerBar did not respond Monday to a request for comment, but Ruby figured the sports bar manufacturers were talking internally.

"They probably talk about me behind their back all the time," Ruby joked.

When the research team at UM started talking about a "capstone" project testing sports supplements, Ruby said some researchers suggested weighing them against bagels and bananas.

Ruby, a triathlete who has led other studies at UM on athletic performance, had a different idea. The team could engage the fast food joint across from campus and avail itself of the chain's meticulously measured portions.

He also had an unlikely source of inspiration for the study: Comedian Jim Gaffigan's bit on McDonald's was on the back of his mind, and he knew the golden arches would raise the level of interest in an otherwise dry academic pursuit.

"As soon as you take something that is so far to the evil side of the sport nutrition spectrum, that's when it becomes interesting," Ruby said.

In the bit, Gaffigan says telling people he eats at McDonald's is like telling them he supports dog fighting: "How could you? McDonald's. It's fun telling people you go to McDonald's. They always give you that look, like, 'Oh, I didn't know I was better than you.'"

So in the UM research, a burger and small fries it was, and in particular, the stigmas attached to them.

"In contrast, the nutritional value and ingredient quality of sports supplemental food items goes mostly unchallenged because of marketing perceptions and a link to regular physical activity/exercise training," reads the article.

In two experimental trials, 11 active males cycled for 90 minutes at varying intervals, and then recovered for four hours. They consumed "macro nutrients" – either the sports supplements or fast food – at zero and two hours of recovery.

Then, the participants biked again, cycling 20 km as quickly as possible. The researchers analyzed muscle samples, blood, and a questionnaire filled out by the bikers.

"Recovery nutrition doesn't have to be overly-calculated and complicated," Ruby said.

On the other hand, he said, energy bars are treated as healthy food, but they're not being sold at the farmers markets, either.

"Why do they get to claim health food status when they're as much a candy as they are a food, compared to other options?" Ruby said.

If you're ready to order piles of fries and juicy double cheeseburgers, don't do it on account of this study, Ruby said.

High maintenance endurance athletes like to talk about their recovery to draw attention to themselves, he said: "It's a sexy story."

However, he said their stories and popular press are riddled with layers and layers of fallacies. So the research team figured it could poke some holes in the theories.

"We thought, you know, I don't think it's that complicated," Ruby said.

Paid for by the center, the study confirmed the team's suspicion, showing some of the benefits of sports supplements are overstated when it comes to muscle recovery.

As Ruby sees it, recovery is simply about muscles requesting a refuel: "You asked me to work. I've done my job. Put some stuff back in the tank, dude."

But don't overdo it.

The fast food participants in the study ate more than burgers. At zero hours, they ate hotcakes and hash browns and drank a small orange juice from McDonald's.

Then, at two hours, they consumed a hamburger, medium coke, and small fries.

"The fat content that we had was relatively low for a fast food menu option," Ruby said. "Certainly, you could make really bad decisions and that could escalate really quickly at a fast food joint."

Ruby said he doesn't want to tell high school coaches to start taking their teams to McDonald's because the kids are likely to over indulge rather than choose small portions.

He himself is a fan of fast food at certain times, and he loves the "little hamburgers" at McDonald's. Note, the "little" hamburgers, not the monster ones, formerly "Super Size" burgers.

His favorite time to eat a burger is after a grueling athletic competition, Ruby said. Indeed, he downed a burger or three after his most recent Iron Man, in Hawaii, although McDonald's wasn't available.

A researcher at McDonald's passed on a message from the Missoulian to the fast food corporation's press people, who did not comment in time for this story. It was unclear at press time if the fast food spokespeople were rendered speechless at the study's results.

UM students report drinking and driving less, but more are tired and overweight

Eat enough carrots and kale, and chances are, you're getting A's and B's.

The University of Montana's projected budget shortfall for the upcoming school year is $5.7 million, according to figures provided at the most…

The Missoula Economic Partnership has secured a seat at a Western regional conference to help develop a national network of big-data hubs, one…

It’s a question worth pondering: If you had to identify documentable places in your town associated with African-Americans, could you do it?

UM freshman recovering from massive, but not uncommon stroke

Up to 12 hours could have passed before McKenzie Capka was found in her dorm room, incapacitated by a blood clot that had found its way to her…

Seismologist is featured speaker at Tech

Ved Lekic, Ph.D, a seismologist at the University of Maryland, will give a talk on "Imaging Tectonic Plates -- Structure and Deformation of No…

The U.S. Forest Service this week released the results of the first of three phases in developing a joint forest plan for the Helena and Lewis…

Brent Ruby, director of the Montana Center for Work Physiology and Exercise Metabolism at the University of Montana, led a recently published study that found that a regular hamburger, french fries and a Coke are just as effective as expensive energy supplements in helping athletes recover from intense workouts. The study found that glycogen recovery from the tested fast food items was comparable to sports energy products designed to do the same thing.

Ruby said factors like weight, nutritional value and calories of all the products tested were monitored during the study.