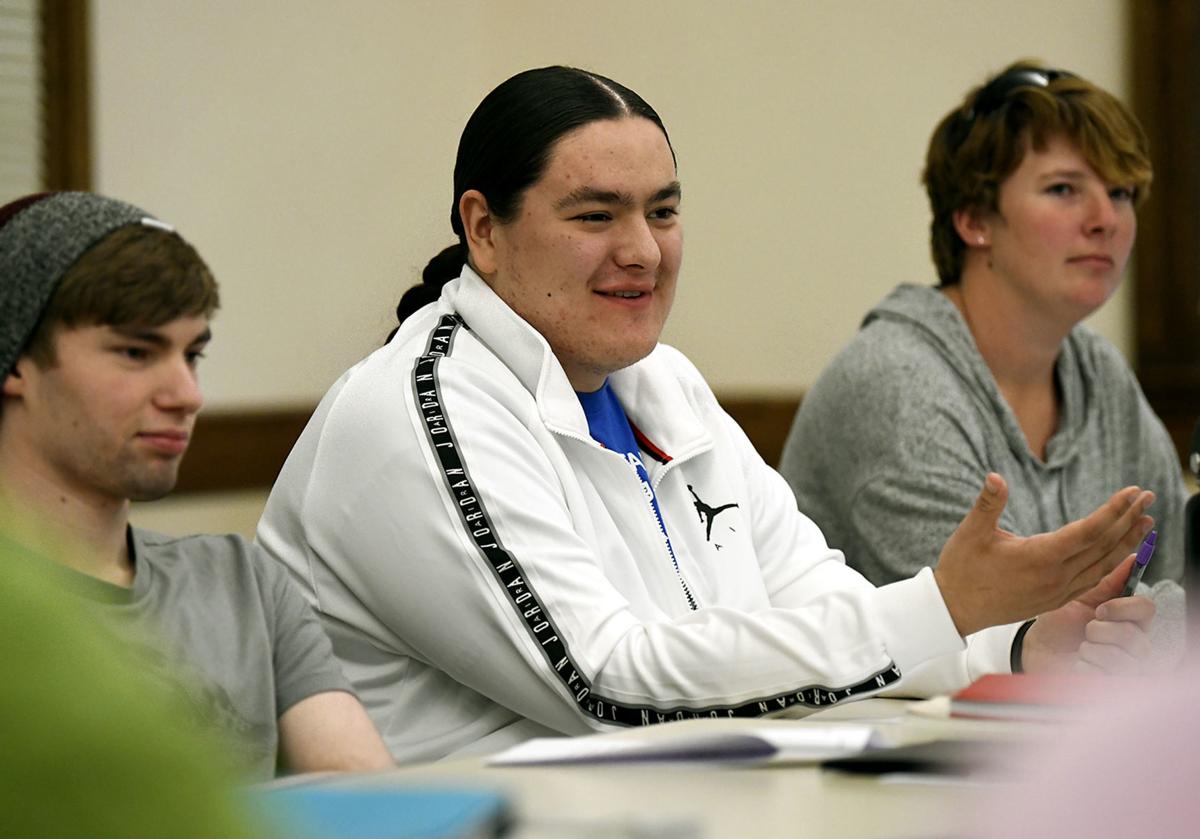 Tristin Bullshoe sits in a writing class at University of Montana-Western in Dillon last spring. Bullshoe, who's from Browning, felt overwhelmed by UM in Missoula and transferred to Western where he said the relationships with the instructors make up for being farther from home. 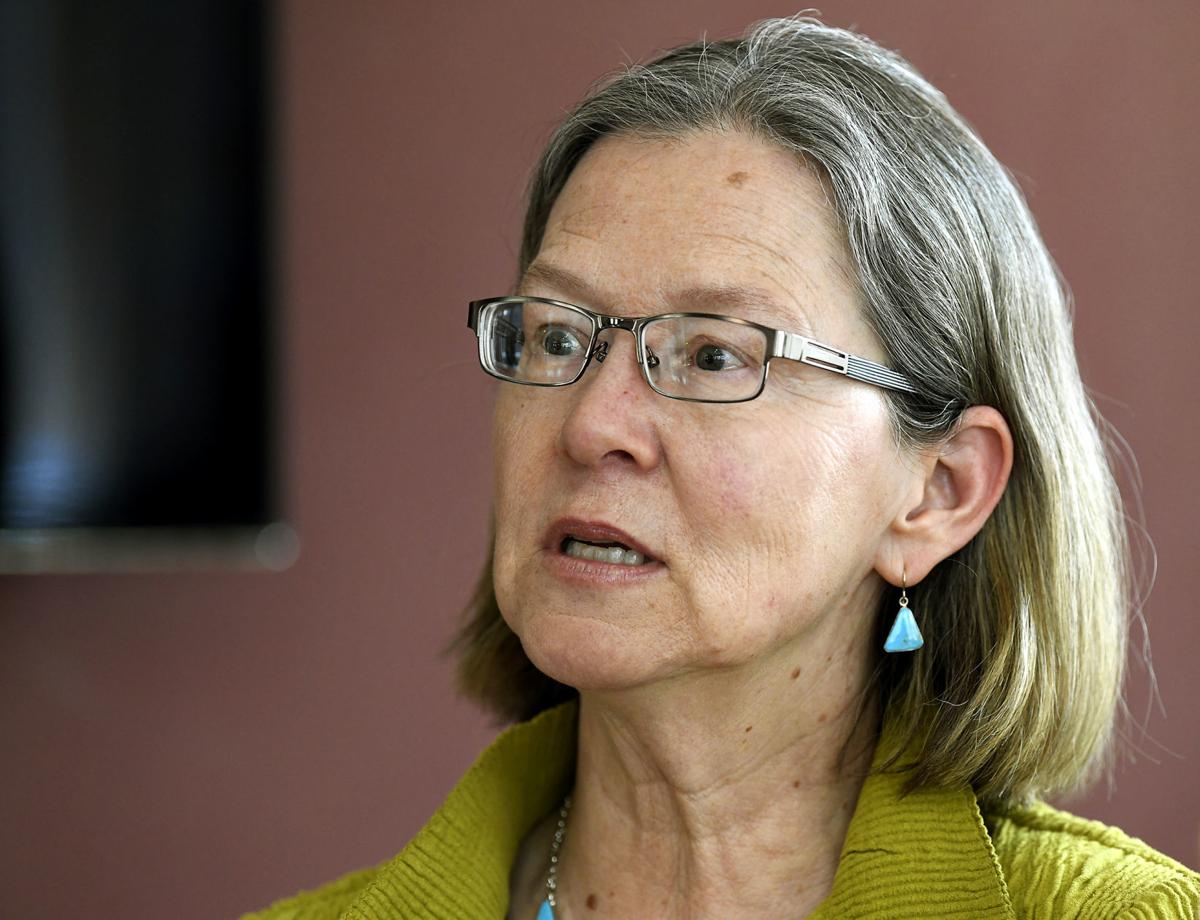 University of Montana-Western Chancellor Beth Weatherby said the university's transition to block scheduling has resulted in dramatic improvements in course completion and graduation. 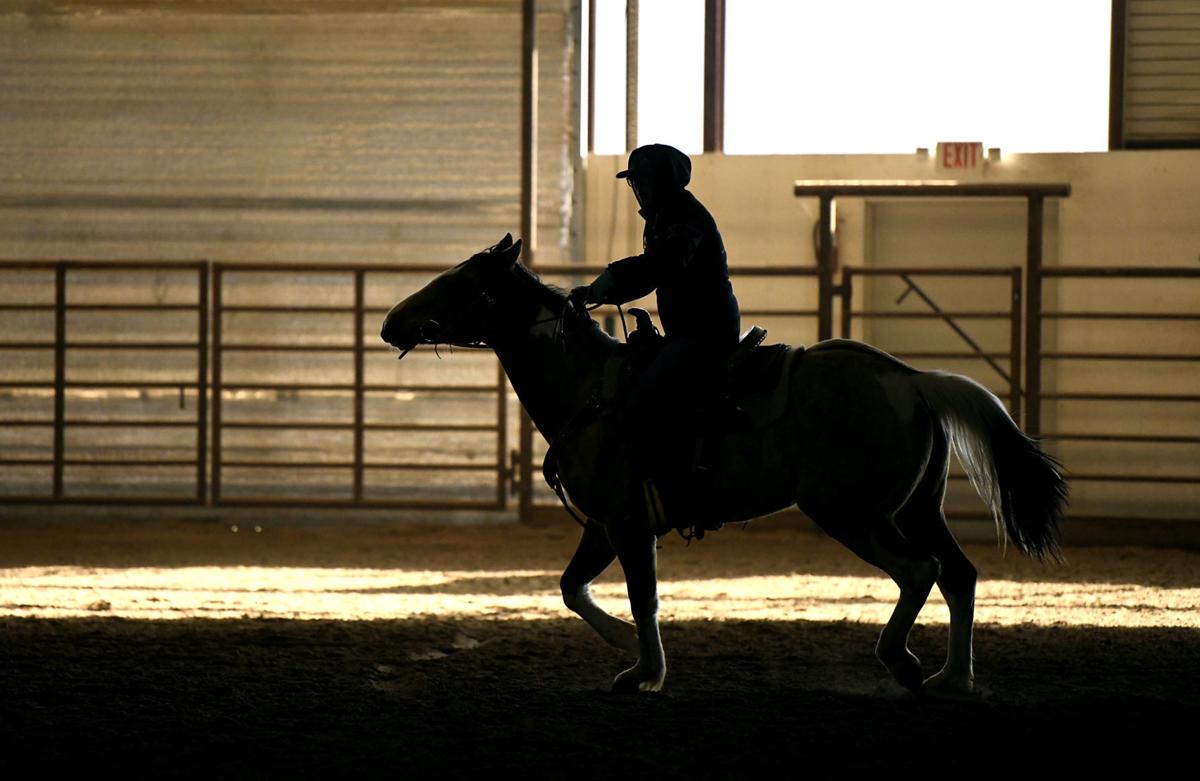 A student rides in an arena during a class at University of Montana-Western in Dillon last spring. Western is the only campus in the nation offering natural horsemanship.

Tristin Bullshoe sits in a writing class at University of Montana-Western in Dillon last spring. Bullshoe, who's from Browning, felt overwhelmed by UM in Missoula and transferred to Western where he said the relationships with the instructors make up for being farther from home.

University of Montana-Western Chancellor Beth Weatherby said the university's transition to block scheduling has resulted in dramatic improvements in course completion and graduation.

A student rides in an arena during a class at University of Montana-Western in Dillon last spring. Western is the only campus in the nation offering natural horsemanship.

DILLON — The University of Montana–Western appeared to some community members to be on the brink of closure more than a decade ago.

"There was an urgency to change because the enrollment was decreasing to the extent where people were worried the university would close," said Chancellor Beth Weatherby, who took the helm in 2015. "There had been a couple of close calls over the years."

Western doesn’t sit in the top place among Montana campuses for propelling students up the income ladder, according to economists with Opportunity Insights who evaluated campuses across the country. But it’s not far off at No. 5.

It’s also an example of a campus that drove a turnaround with an exhaustive overhaul. A pilot project completed in 2003, and enrollment has grown since then to 1,363 in the 2019 school year, nearly 40%. The change put students on a “block schedule,” which transformed the way faculty teach and offers students immersive learning.

“We are the only public university in the United States doing this,” Weatherby said. (Some private institutions, such as Colorado College, use a block system.)

Dubbed Experience One, or X1, the approach goes hand in hand with some of the school’s other features. The campus sits in a wide valley surrounded by mountains. It has a close relationship with its community.

Weatherby, who landed at Western after the overhaul, said she considers herself a steward of its success. The approach has matured, she said, and the campus may parlay the experience into an enterprise.

"When you've done something for 15 years, it's not a flash in the pan. It has stabilized a small, very rural university at a time when small publics and privates are struggling."

Experience One means students "take one single course at a time and learn by doing."

In the “block” schedule, courses run three hours at a time each day for 18 days. The lengthier classes fully immerse students in a topic and allow extensive field work, and they also give students an easier way to schedule work shifts.

The block schedule is both intense and rewarding for students such as Adrianna Pittman (see related story). Pittman, studying math and science for secondary education, was drawn to Western in part because of the block schedule and hands-on experience.

"All your attention is on one class, so you can totally commit to it," Pittman said.

Before she went to college, she heard people talk about how difficult the transition would be from high school. Pittman wanted to get good grades, and she was concerned she would be overwhelmed. The block schedule has eased her mind.

"I don't have to fret about things. It's just one class at a time," she said.

Last semester, a group of students in a computer lab talked about some of the pluses and pitfalls at Western. One student said employers are so familiar with the campus, the first thing they do when a student interviews is ask for their schedule.

But the campus lacks ethnic and cultural diversity. That characteristic doesn’t make it stand out among other Montana colleges and universities, but it’s a factor students notice.

Tristin Bullshoe transferred to Western after feeling like a fish out of water at the University of Montana in Missoula. In Browning, Bullshoe had graduated as one of 12 students, but at UM in just one biology lecture hall, he had 300 classmates. The adjustment to the community was not easy either.

"It was a culture shock already going from the rez to the city and to the university," Bullshoe said.

He liked UM because it has Native American faculty, and he said it's important for Native students to be able to see themselves on campus. Western and its community are less diverse, but Bullshoe appreciates his classmates and the environment.

"I definitely found my niche here. … I love Western. I love it," he said.

The campus is small, and students are divided up into groups, so he's on the same track with 15 or so other students. They go to classes together, create study groups, and hang out together.

The bonded experience the small “cohort” creates is one larger campuses such the Missoula flagship are trying to simulate as a way to retain students.

But Dillon has the campus that is farthest from any reservation in Montana, and Bullshoe said he yearns for the connections back home.

"For Native students in particular, I feel like it may be a harder adjustment than other universities in the state. But what makes up for that is the relationship with the instructors," Bullshoe said.

Mike Morrow, a biology faculty member, came to Western in 2002, before the complete transition to Experience One.

“Our success has continued, at this point, to snowball,” Morrow said.

Students get concentrated time in the field, and that pays off when they’re job hunting. In his microbiology class, students do sampling in local rivers and streams for antibiotic resistance, and then do the lab work.

Even undergraduates can work on research projects and have them published in peer-reviewed journals and get grants, he said. The community sees relevance in the work as well, Chancellor Weatherby said; she pointed to research on hydrology used by Montana Fish, Wildlife and Parks.

No majors class has more than 24 students, a selling point for students who come from smaller high schools, Morrow said. He also said the concentrated education pays off.

This year, a biology student from Western was accepted into three competitive veterinary schools, he said. Western sends typically one or two students each year to vet school.

"It doesn't sound like much, but it is," he said, for a small school.

Western has other things going for it. Western and Blackfeet Community College developed a partnership to help get elementary school teachers in Browning, where there’s a shortage.

“Change is so frequently made possible only because there is a drive and urgency to make something happen,” Weatherby said.

Western considers itself the only campus in the nation offering natural horsemanship as a degree, a study partly possible because of its block schedule. (It takes time to saddle and unsaddle a horse.) A man who owned an equine center in Paris established himself in the Dillon area and wanted to help bring the program to Western.

In another niche offering, Western has a rare artistic and scientific glass blowing program.

The block schedule met with some resistance at first, but Weatherby said that’s mostly in the rearview mirror. And the results have been significant for course completion and graduation.

The number of average credits students are taking has increased from 12.6 to 14.3, more than the average for the Montana University System of 12.1, according to data from Western.

A block schedule won't be appropriate for every campus. But as colleges and universities undergo scrutiny, skepticism and budget blows, bold undertakings may be appropriate.

“There’s a great need for change in many places across the country,” Weatherby said.

It doesn’t come without pain.

“It’s not easy because academia is a tradition-bound institution,” Weatherby said. 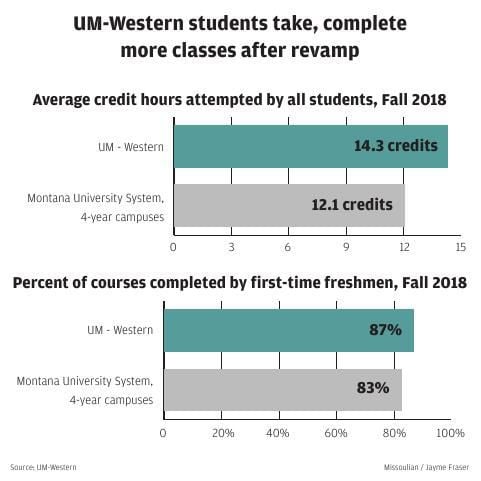 On the cusp of another school year, the Missoulian examines this week the role education plays in upward mobility. Across the United States, economists have tracked a steep drop in economic mobility across all 50 states in the last half century.

This series looks at challenges Montana students and educators face and models that have proven to make a difference. Stories were produced with support from the Education Writers Association Reporting Fellowship program.