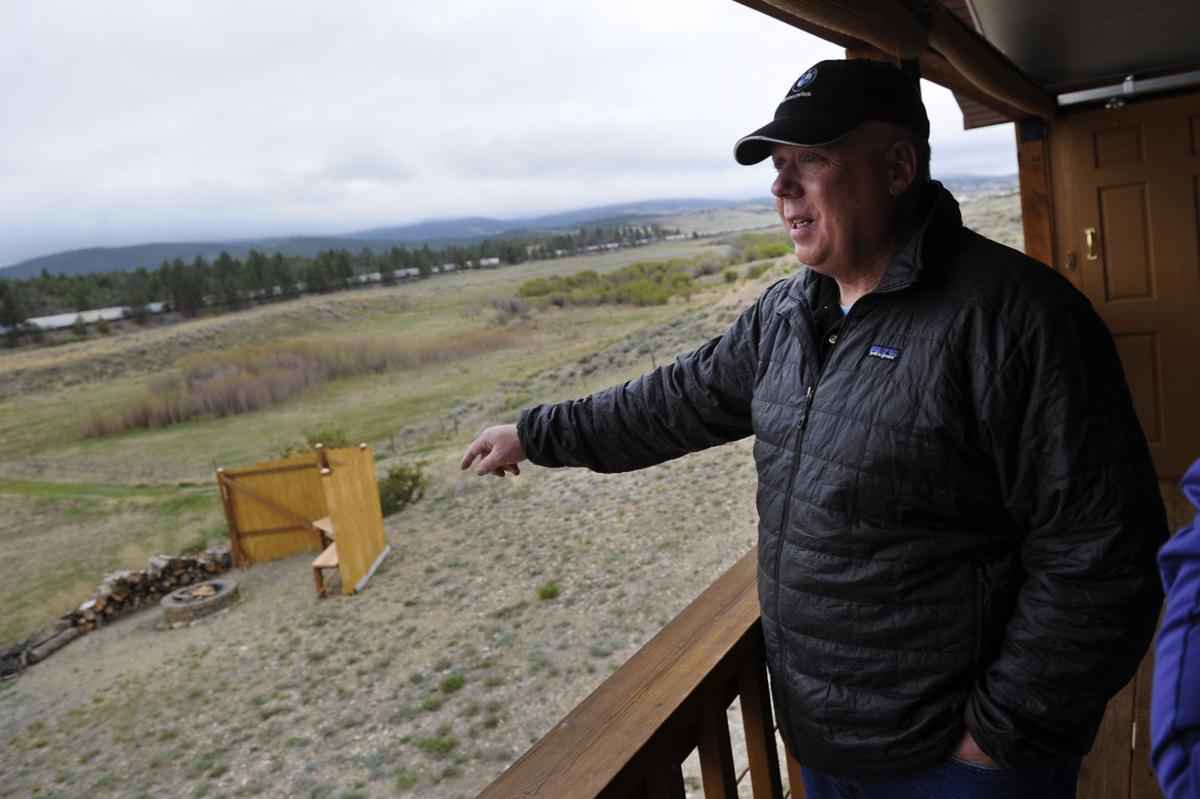 From his back deck, Kevin Huddy talks about a long chain of empty grain cars being stored on the BNSF track behind his property Friday afternoon. “We entertain out on the deck and barbecue and now we’re going to do it staring at rusty, graffiti-laden rail cars,” Huddy said. 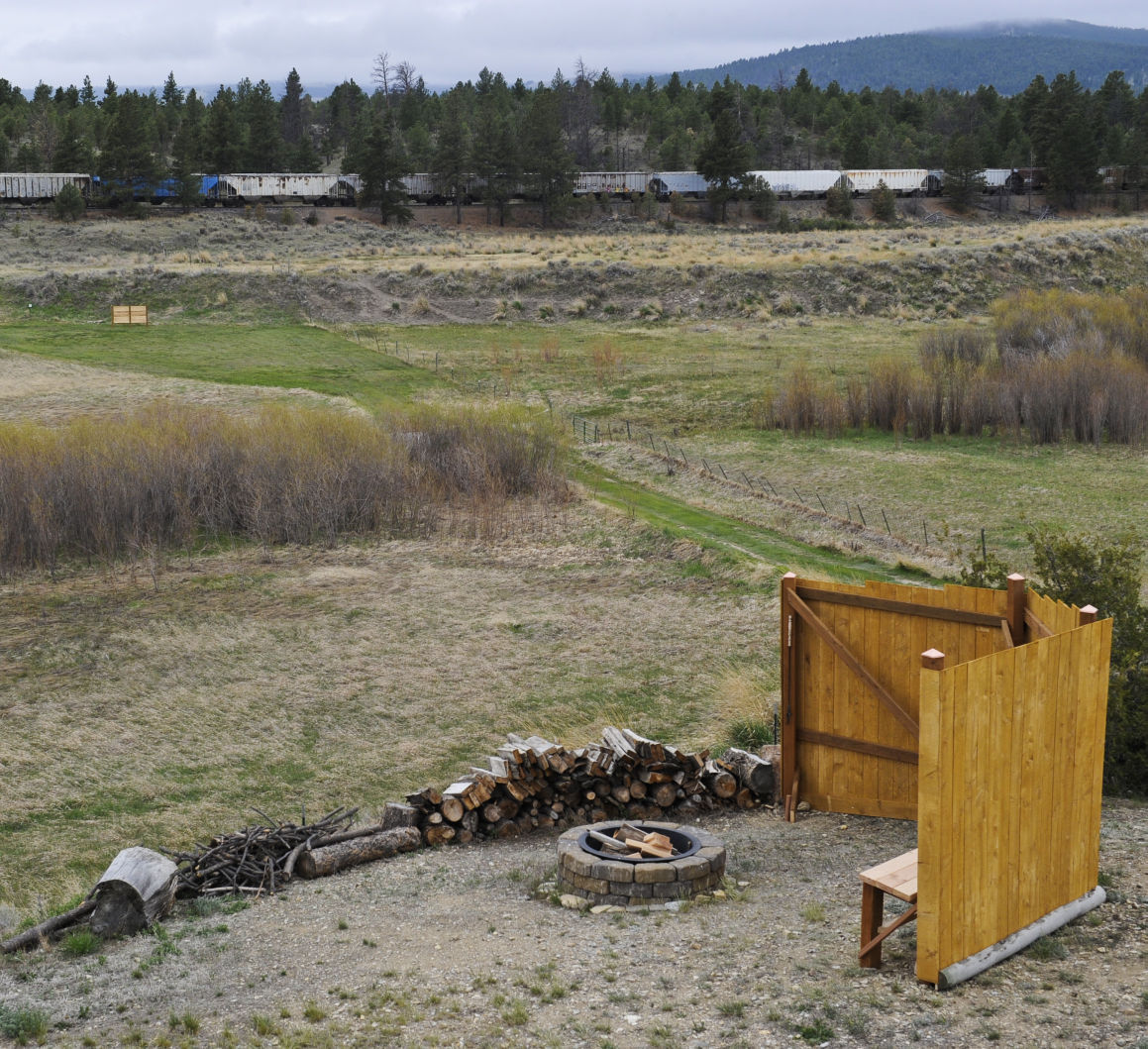 The view from the Huddys' back deck.

HELENA - Parked railroad grain cars that began arriving earlier this month on unused track that snakes its way north of Helena are drawing concern from one of the families that lives in the area.

A spokesman for Burlington Northern Santa Fe Railroad said storing the cars there is temporary until later this summer when the demand for grain cars increases with the harvest of crops.

Annie and Kevin Huddy, who have lived in their rural home about four years after moving from Fairbanks, Alaska, said the empty rail cars began appearing on tracks near their home in late April.

From their back deck, the line of aging cars is now part of their landscape that rises with timbered slopes and is carpeted with grasses and sage.

Elk and deer wander across the tracks and into their yard, but the family doubts this will continue with the wall of grain cars despite breaks train crews left at crossings.

Matt Jones, a BNSF spokesman in Bozeman, said on Thursday that between nearly 700 and almost 800 rail cars may be stored on the tracks. A final set of about 110 rail cars has yet to arrive.

Local officials were notified of the railroad’s plans, Jones said, although notice was not provided to property owners.

Between the time that he received notice the cars would be stored and when they began to arrive, there wasn’t time to alert property owners to the railroad’s plans, Jones explained.

Hs wrote in a letter to the editor of the Independent Record that storage of the rail cars is a temporary measure and the result of seasonal variability in agricultural market demand.

The rail cars are destined to be returned to service as soon as possible, “likely in July or August as harvest ramps up."

“Agricultural freight demand varies throughout the year, though, and when grain markets are down we have to idle a portion of the grain car fleet. We ask for your patience and apologize for an inconvenience this temporary storage may cause,” his letter continued.

People who now have the cars outside their backyards want to know how long they will be there, Kevin Huddy said.

He figures it was inconvenient to store these rail cars elsewhere so they were moved to outside of Helena.

“Judging by their behavior, I think they don’t really care,” he said.

Jones in a subsequent email wrote to say “I do want to emphasize the point made in the letter that we apologize for any inconvenience this temporary storage may cause.”

The railroad has added to its fleet of cars in past years in response to record crops and the demand for rail transportation, his letter to the editor noted.

Kevin Huddy objects to parking unused rail cars on unused track and said, “It wasn’t given to them to have a storage facility.”

The Huddys say they were told by a Montana Rail Link official that the grain cars would be stored on the track that stretches north toward Great Falls until mid-July. The couple also said Jones told them the cars would be there until August.

“I said, 'I can’t imagine you’d like these in your backyard,'” she said of her conversation with Jones.

While Annie said she was promised someone would come to take a look at the family’s concerns, she hasn’t seen anyone.

She said she’s also worried about fire danger from rail traffic, to which Jones responded that BNSF is aware of the dry conditions and would make every effort not to add to the risk of igniting a wildfire.

The landscape is parched, and earlier this month wildfires on either side of the Montana Rail Link tracks northwest of Helena burned between 50 and 70 acres. State officials have said a train was the cause of the fire.

“I’m not saying not in my backyard and put it in somebody else’s” Annie Huddy said.

Instead, she explained, these empty railroad cars could be stored along uninhabited lands.

“We entertain out on the deck and barbecue and now we’re going to do it staring at rusty, graffiti-laden rail cars,” Kevin Huddy said.

“It pretty much wouldn’t surprise me to see some of these cars left out here through the winter,” he noted.

The cars are being stored here, Jones wrote, so they’re positioned for when needed at harvest time.

“It’s pretty frustrating,” Kevin Huddy explained as he sat at his kitchen table and looked out a window to the line of grain cars.

“It’s not the end of the world, but it’s an irritation that need not have happened in my mind,” he said.

'Beliefs, fear and anger': The roots of the Freemen still entrenched 25 years later

The third convicted Montana Freemen is living in Billings after spending the majority of the last 25 years of his life in prison.

Recently found footage from Montana Highway Patrol vehicle considered key in a lawsuit filed against the agency has been made public.

“This is an effort, led by the highest office in the nation, to replace neutrality in teaching with slanted propaganda," said Superintendent of Public Instruction Elsie Arntzen.

Montana added 167 new cases of COVID-19 on Tuesday, and one more death due to the virus.

Sights set on rebuilding M&M: 'It's going to take a series of small miracles'

There’s nothing left but piles of bricks and charred rubble where the M&M Cigar Store served as an anchor icon to Uptown Butte for 130 years.

Montana added 222 new cases of COVID-19 on Wednesday and two more deaths due to the disease.

Twenty-five years ago this week, the tiny town of Jordan, Montana, was overrun.

Montana added 129 new cases of COVID-19 on Thursday, and two more residents have died from the virus.

Drought conditions are widespread in Montana

From his back deck, Kevin Huddy talks about a long chain of empty grain cars being stored on the BNSF track behind his property Friday afternoon. “We entertain out on the deck and barbecue and now we’re going to do it staring at rusty, graffiti-laden rail cars,” Huddy said.

The view from the Huddys' back deck.