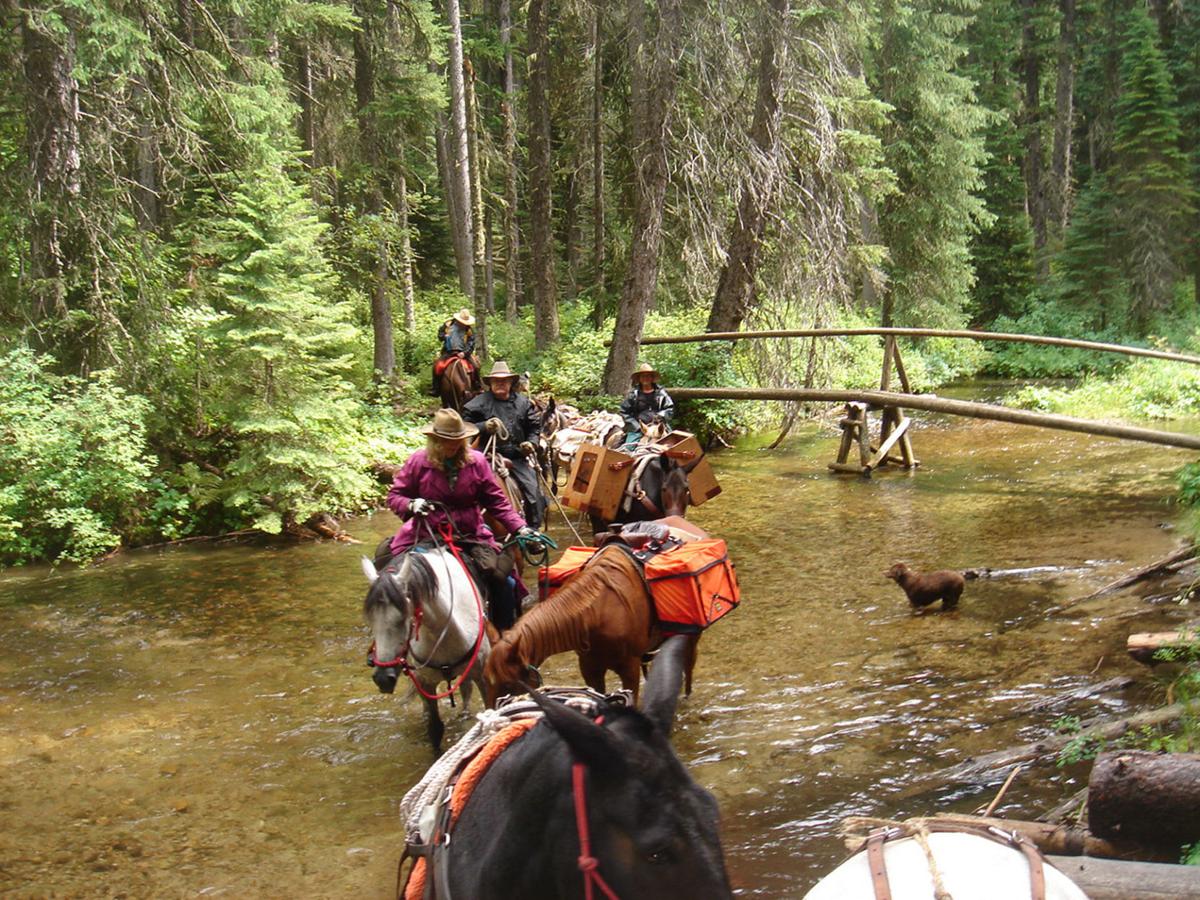 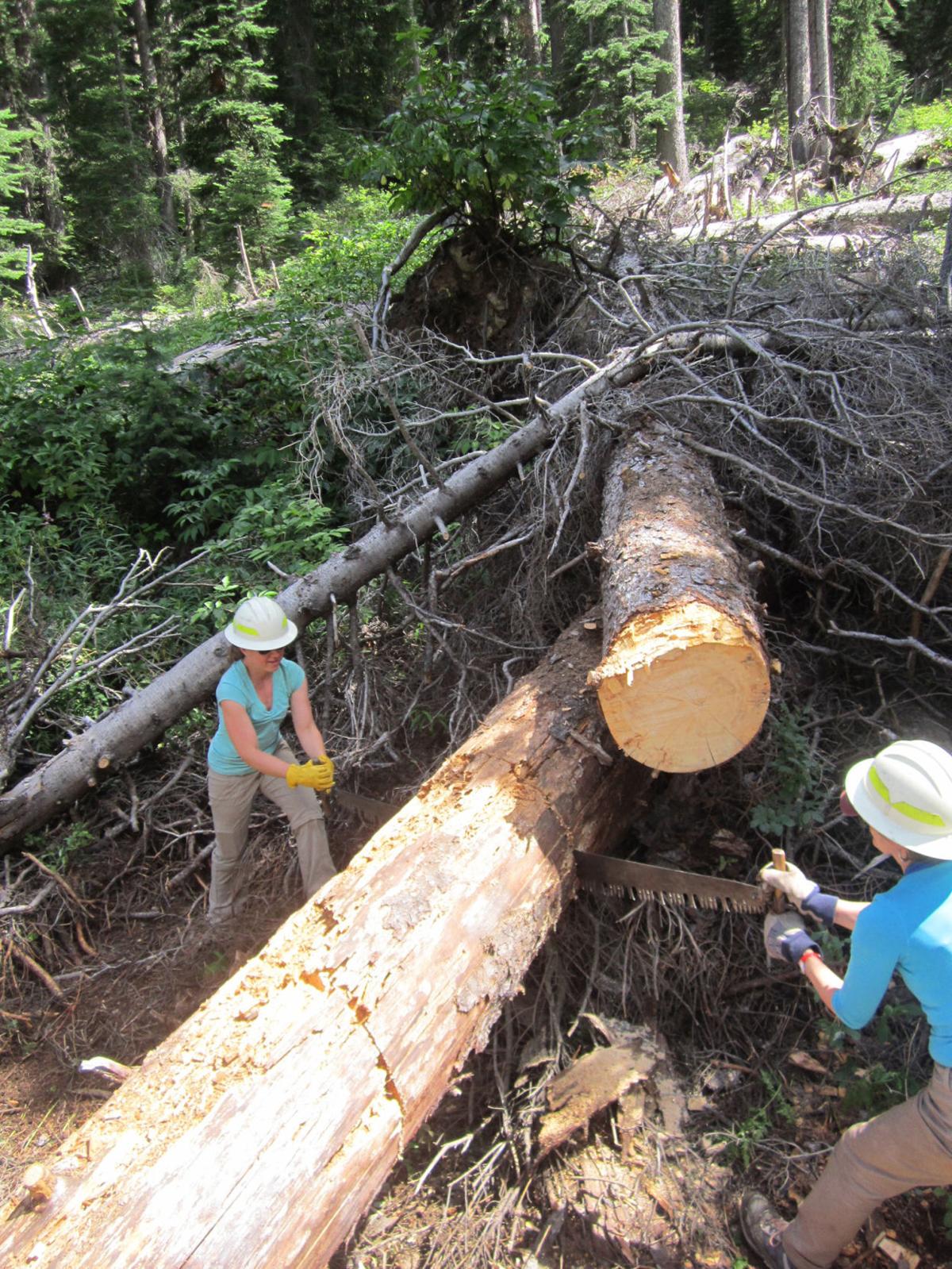 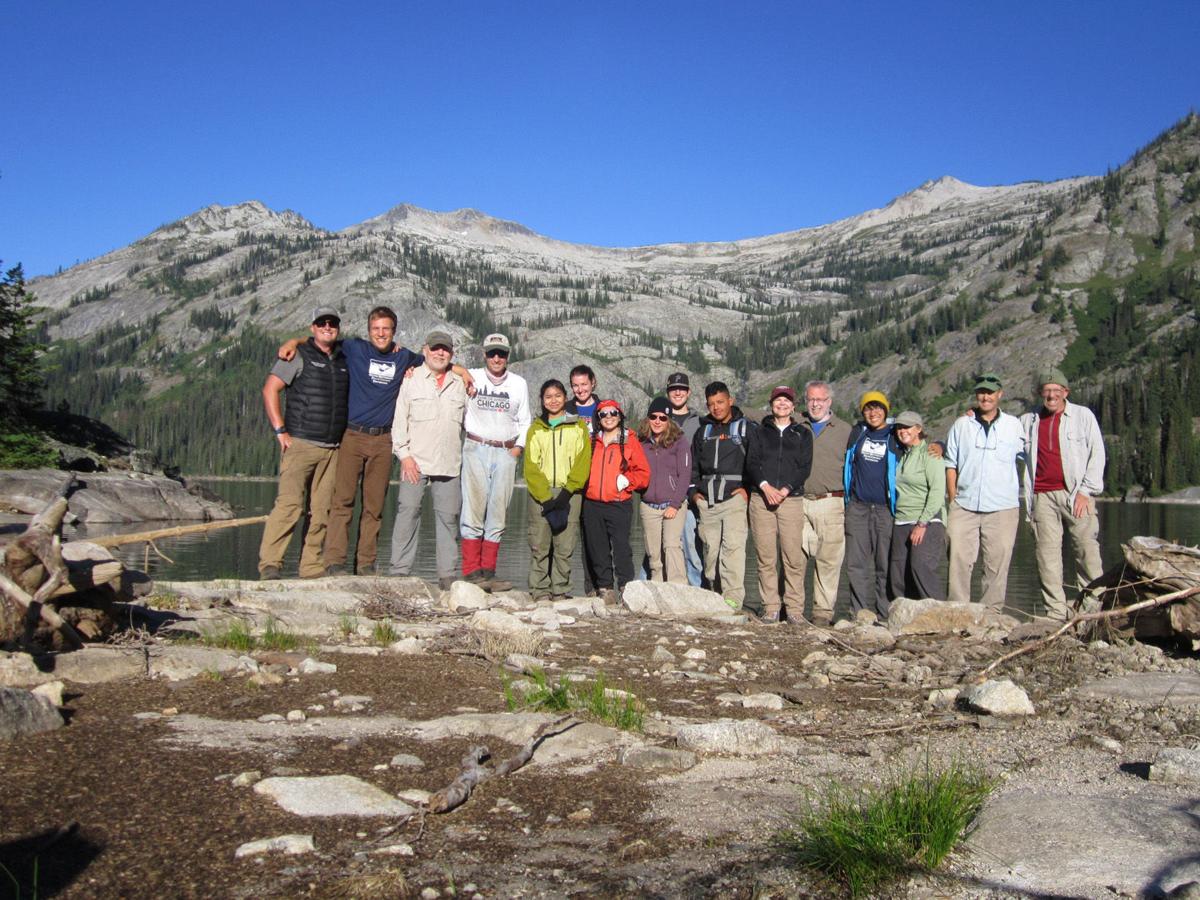 Sierra Club volunteers pose for a photograph next to Big Creek Lake. 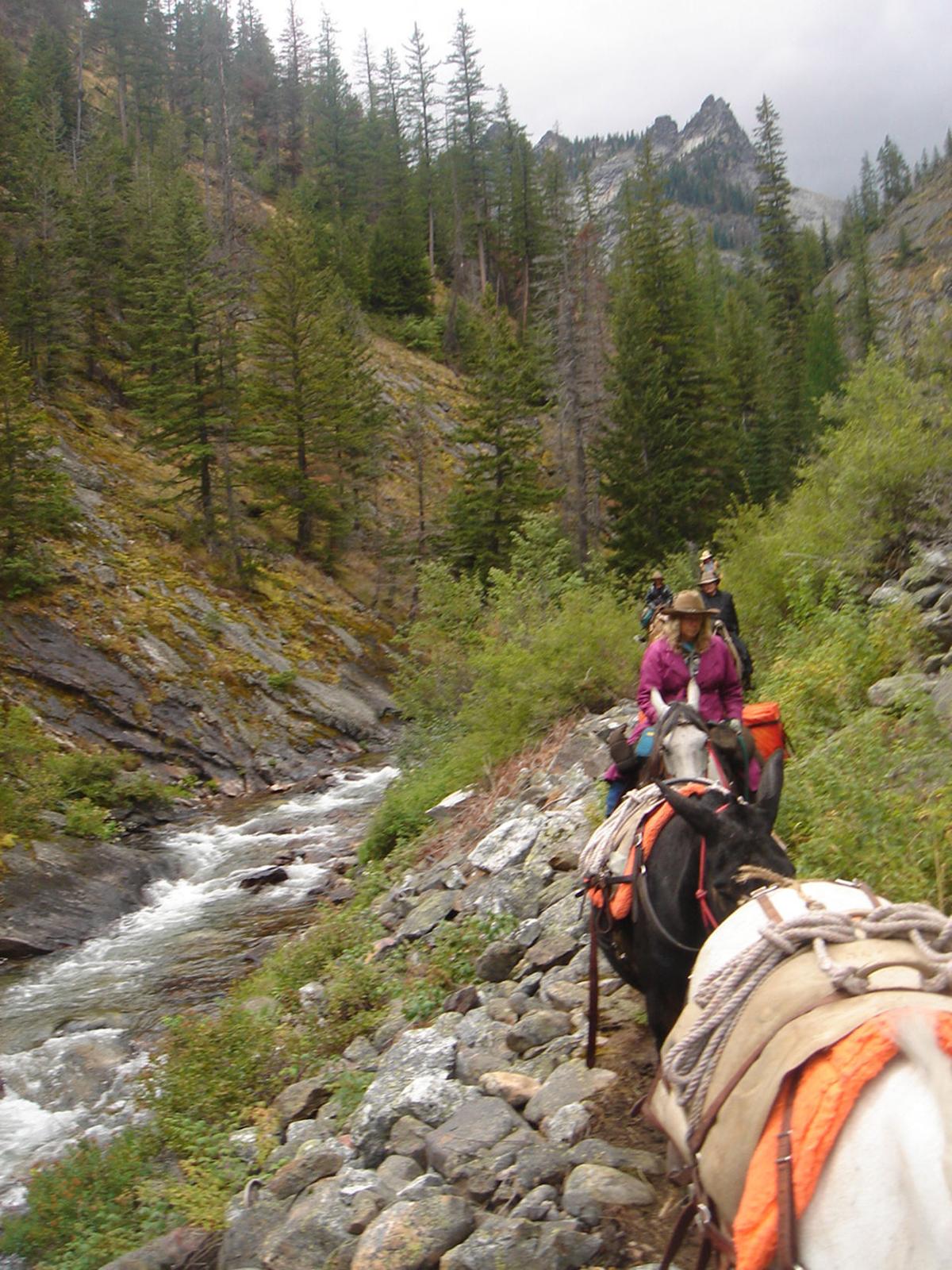 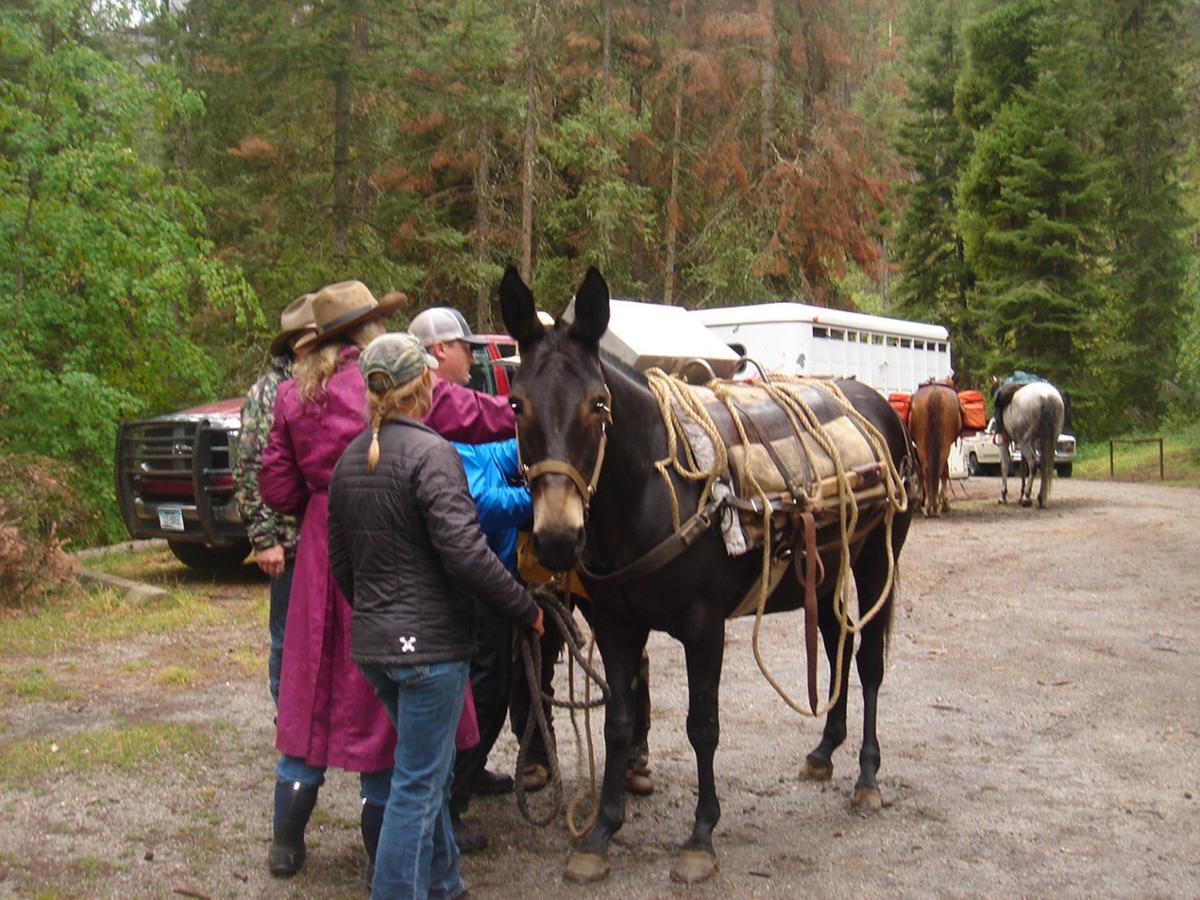 HAMILTON – Tony Rothschild of Chicago had never before ventured into the wilds of the Selway-Bitterroot Wilderness.

Earlier this month, the attorney joined other Sierra Club volunteers to spend a week clearing trails around Big Creek Lake on a journey hosted by the Selway-Bitterroot Frank Church Foundation.

It's likely that he'll never forget the South Fork Trail.

It's there that he and the others spent long, hard hours working with cross-cut saws to cut through a jungle of centuries-old Douglas fir trees felled several years ago by a strong blast of wind.

Rothschild remembers many of the downed trees were in the range of 30 inches in diameter.

It was hard, physical work to move them off the trail, and he loved every minute of it.

Beyond that sweat and strain, the Chicagoan will never forget looking up and seeing the walls of granite that edged the canyon.

"It was gorgeous," he said. "Just unbelievable. It looked like a sculptor's whim."

That's just the kind of reaction that members of the Selway-Bitterroot Frank Church Foundation hope to hear.

This summer, the foundation put together two weeklong volunteer projects based out of Big Creek Lake.

The American Hiking Society brought in the first group of volunteers. They were followed by people recruited by the Sierra Club.

"These people came from all different parts of the country," said Coby Gierke, the foundation's program director. "Many had never heard of the Selway-Bitterroot Wilderness before. These trips introduce them to the largest wilderness area in the country."

The foundation selected the Big Creek area with the idea that there were three trails that could use some work.

The volunteers were able to completely clear one and came within about a mile of clearing the South Fork Trail.

"The third trail was so long neglected that we couldn't even find it," Gierke said. "It's an old trail that goes to an unnamed lake that we understand is beautiful. We searched around for a couple of days, but we never did find it."

Clearing the South Fork Trail proved to be a larger challenge than expected.

"There were a lot of 200- to 250-year-old Douglas fir trees that had been knocked over," he said. "There were these huge root balls and huge trees lying across the trail. Since we were in the wilderness, they all needed to be logged out using a cross-cut saw."

"We spent nearly two weeks working in teams of three to four sawyers per saw," Gierke said. "Some of the trees were so large that the cuts took forever to make. We got to about a mile from the lake and ran into a jack straw pile of trees that was far too complicated for us to tackle."

When the trip was over, Gierke said he heard several volunteers were ready to go back to complete the clearing work.

"We had some really great feedback from the people who went," he said. "They all had great things to say about the trip."

"This was a huge effort," Gale said. "We received some help from the Selway-Bitterroot Backcountry Horsemen and the Forest Service's Ninemile Pack String to pack gear in and out for the volunteers. It takes a lot of cooperation to make things like this happen. We're fortunate to have so many partners."

The Selway-Bitterroot Wilderness Foundation continues to step forward and provide valuable assistance on a variety of projects.

This year, Gale said, after timing made it impossible for her to hire two new wilderness rangers, the foundation offered the services of a staff person and four interns.

"They have done some really great work for us this summer," she said.

There are about 1,500 miles of trail on the Bitterroot National Forest. About 800 of those are in the wilderness.

Between the work accomplished by the Bitterroot's own four-person trail crew and a number of different partner organizations, Gale said more than 600 miles of trail have been cleared this summer.

"Our target was 340 miles," she said. "That's the kind of work that we wouldn't be able to do without our partners. It's pretty amazing."

This was the third service trip that Rothschild had been on. The other two were in Wyoming.

"I would definitely do another," he said. "I love physical work. I love being in the mountains. I live my life in the flatlands behind a desk. It's just an ideal vacation for me."

"I would definitely do another. I love physical work. I love being in the mountains. I live my life in the flatlands behind a desk. It's just an ideal vacation for me."

An Oklahoma man says it started over a Montana man’s slights about Oklahoma football and cowboy boots.

Sierra Club volunteers pose for a photograph next to Big Creek Lake.