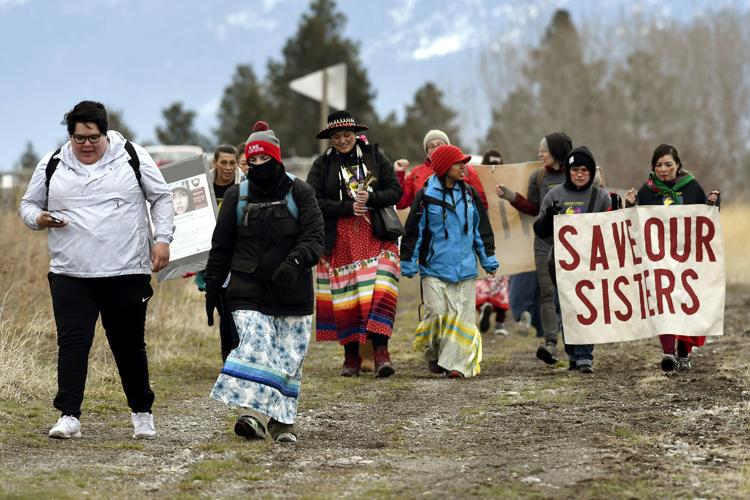 A group trying to raise awareness about missing and murdered indigenous women walks down the side of Highway 93 near Rollins on Thursday. The four-day trek across the Flathead Indian Reservation will end at Evaro. 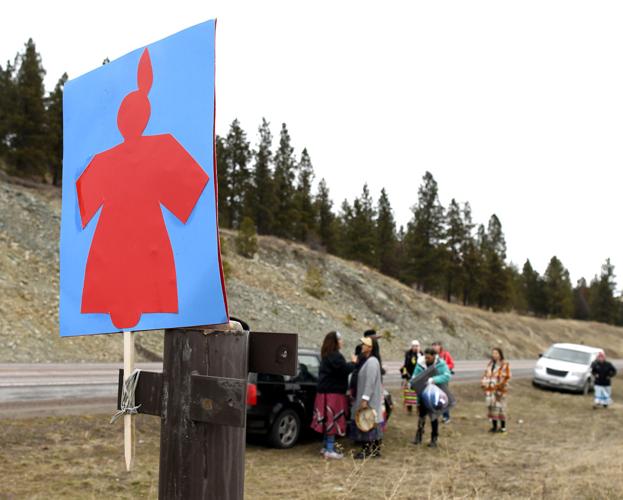 The marchers gathered near Rollins before setting out on the trek for missing and murdered Native women, who suffer violence and disappear far more often than non-tribal women. 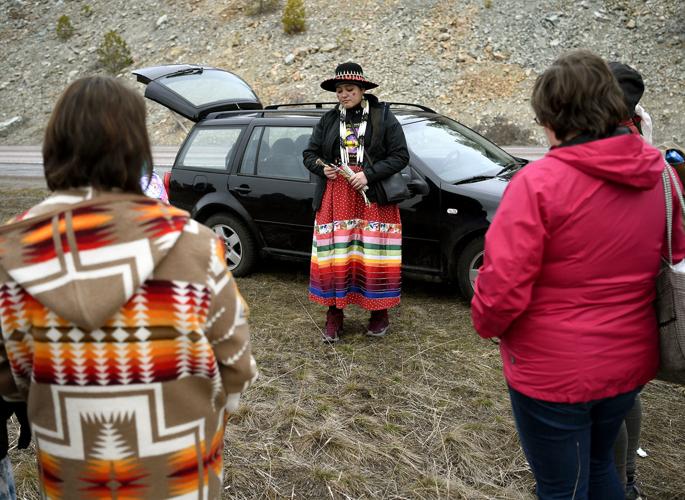 Marita Growing Thunder speaks to the group before the march starts on Thursday. Growing Thunder dedicated the walk to Jermain Charlo, a Dixon woman still missing since last June.

Sixteen other marchers joined her for the start of a four-day trek across the Flathead Indian Reservation to raise awareness about missing and murdered indigenous women.

As they assembled at their starting point at 8 a.m., the University of Montana sophomore made clear that “we were going to walk whether people show up or not. It must be done.”

Native women suffer violence and disappear far more often than their non-tribal counterparts. Growing Thunder, a member of the Fort Peck Assiniboine and Sioux tribes who grew up on the Flathead Reservation, started raising awareness of them at a young age. During her senior year at Polson High School, she hand-made and wore a ribbon skirt each day to honor a different missing or murdered Native woman.

She drew on other traditions as well. Several Plains Indians tribes practice the Sun Dance, a ritual that involves intense physical endurance and sacrifice. “I wasn’t called to Sun Dancing,” she said, “but one thing I could do was walk.”

Growing Thunder has made the trek each of the past three years, joined by allies from near and far. Los Angeles resident Kristin Burke learned about the march last year through social media, and had returned to do it again. “I really feel like it’s a horrible injustice that’s been going on for hundreds of years, and we need to address the trauma and pain that these families are going through,” she said.

Researcher Annita Lucchesi’s MMIW Database has logged 16 Native murders and missing-person cases on the Flathead Indian Reservation since 1900. One of the most recent cases is that of Jermain Charlo, a Dixon woman who vanished from Missoula last June and remains the subject of an extensive, multi-agency search.

Growing Thunder dedicated this year’s walk to Charlo, and she was on marchers’ minds as they set off Thursday. “Jermain’s my grand-niece, that’s what brought me up here,” said Cheryl Morigeau. “I hope to make everybody aware. Somebody out there knows something.”

Charlo’s aunt, Valenda Morigeau, handed out T-shirts with a stylized portrait of her niece, made by art students at Two Eagle River School. Her grandmother, Vicki Morigeau-Valede, carried a missing-person poster with Charlo’s image and information. “They’re honoring my granddaughter,” she said. “This is a way to get awareness that these people are still missing and they need to be brought home.”

As the search for Charlo continues, the handling of Native missing-persons cases is drawing scrutiny in Pablo, Helena and Washington, D.C. The Confederated Salish and Kootenai Tribes formed a working group on the issue in January, and hosted a conference on it earlier this week. Savanna’s Act, which would require the U.S. Department of Justice to develop protocols for missing-persons cases in Indian Country, is pending before Congress. Hanna’s Act, which would have bolstered the Montana Department of Justice’s response to these cases, was nixed on a tie vote in a Senate committee Monday.

“I’m so sad that it is stuck in the Senate,” said Margaret Debone of Missoula. She was holding a large “Save our Sisters” banner with Annie Heuscher of Stevensville, who added, “I find it hugely unbelievable that our Legislature voted against something so simple and important.”

Growing Thunder hopes to have a hand in solving her community’s challenges in the future. She’s studying political science and social work at UM, with plans to attend law school. But “you can’t have awareness and action without the other,” she said. “They go hand in hand.”

And now through Sunday, awareness is where she’s focused. “There’s a sense of community and unity right now,” she said as the participants circled up. Her mother Shannon added, “there’s not a person this hasn’t affected. It’s not about me, it’s not about Marita, it’s about us, all of us.”

They passed around a pouch of tobacco, with each walker taking a bit and placing it on the ground as an offering. The group had plenty of ground to cover: They planned to reach Polson Thursday, the first of four legs on their journey to Evaro.

“This is the hardest thing I’ve ever had to do,” Growing Thunder told them just before they left. “ … All I know is that it has to be done.”

After sorting out some final details, the marchers picked up their signs and banners; one member of their group, Arlene Adams, sang and drummed, and they set off.

Walking the walk, UM freshman to walk 80-miles across reservation for Missing and Murdered Indigenous Women

ELMO — As the sun peeked over the Mission Mountains, revealing the snow-capped peaks and reflecting off the water of Flathead Lake, Marita Gro…

A 15-year-old Native girl has been reported missing from Lake County.

Two events scheduled in Missoula this week seek to broaden the conversation about human trafficking in Montana and around the world.

One year later, Jermain Charlo still missing while the state reckons with MMIW

Guy Baker has been having trouble sleeping lately. The 19-year Missoula Police detective assigned to the missing persons case of Jermain Charl…

A group trying to raise awareness about missing and murdered indigenous women walks down the side of Highway 93 near Rollins on Thursday. The four-day trek across the Flathead Indian Reservation will end at Evaro.

The marchers gathered near Rollins before setting out on the trek for missing and murdered Native women, who suffer violence and disappear far more often than non-tribal women.

Marita Growing Thunder speaks to the group before the march starts on Thursday. Growing Thunder dedicated the walk to Jermain Charlo, a Dixon woman still missing since last June.