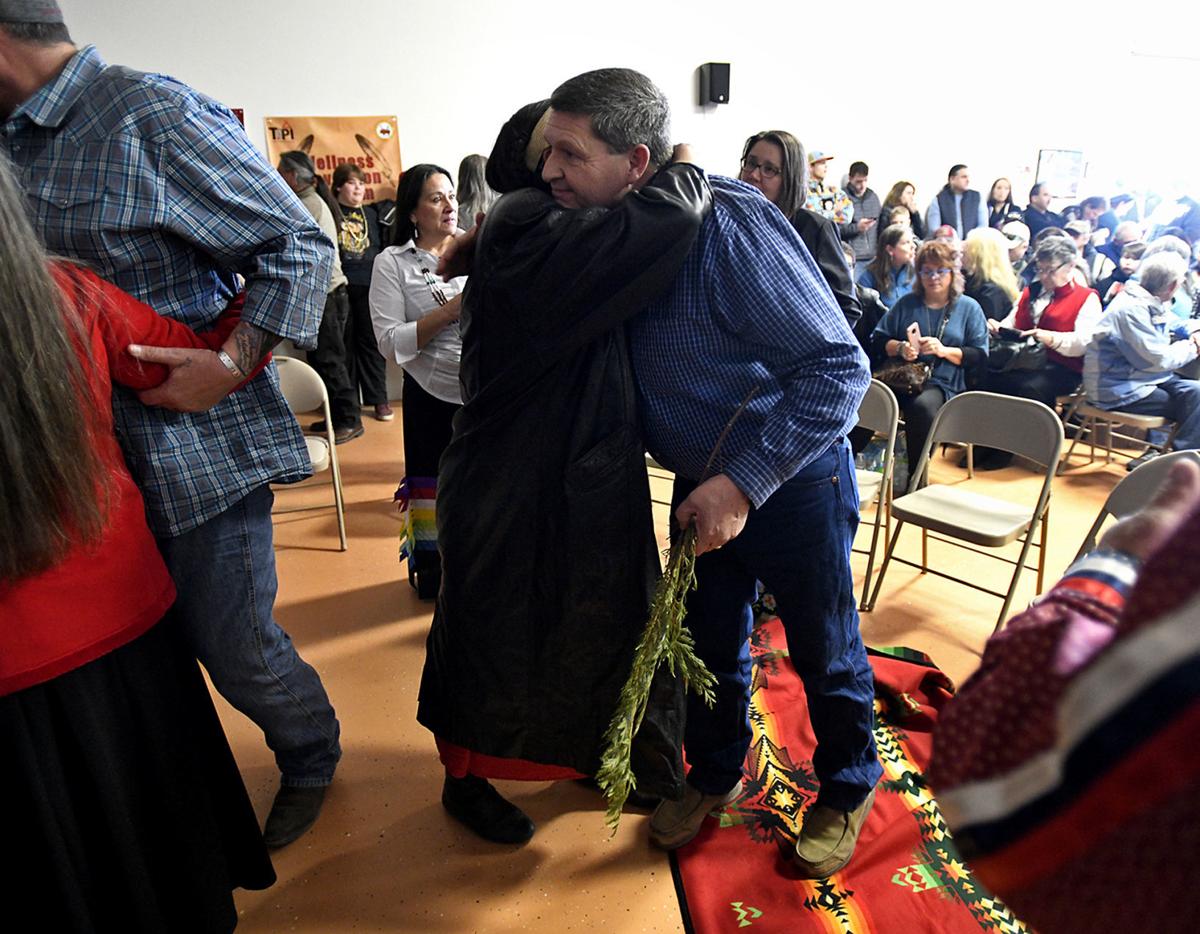 Gerald Gray, chairman of the Little Shell Tribe of Chippewa Indians, hugs Arleen Adams before a pipe ceremony at the Shawn Gilbert Event Center in Great Falls on Saturday. The tribe marked their recent federal recognition with the pipe ceremony and a public celebration later in the day. 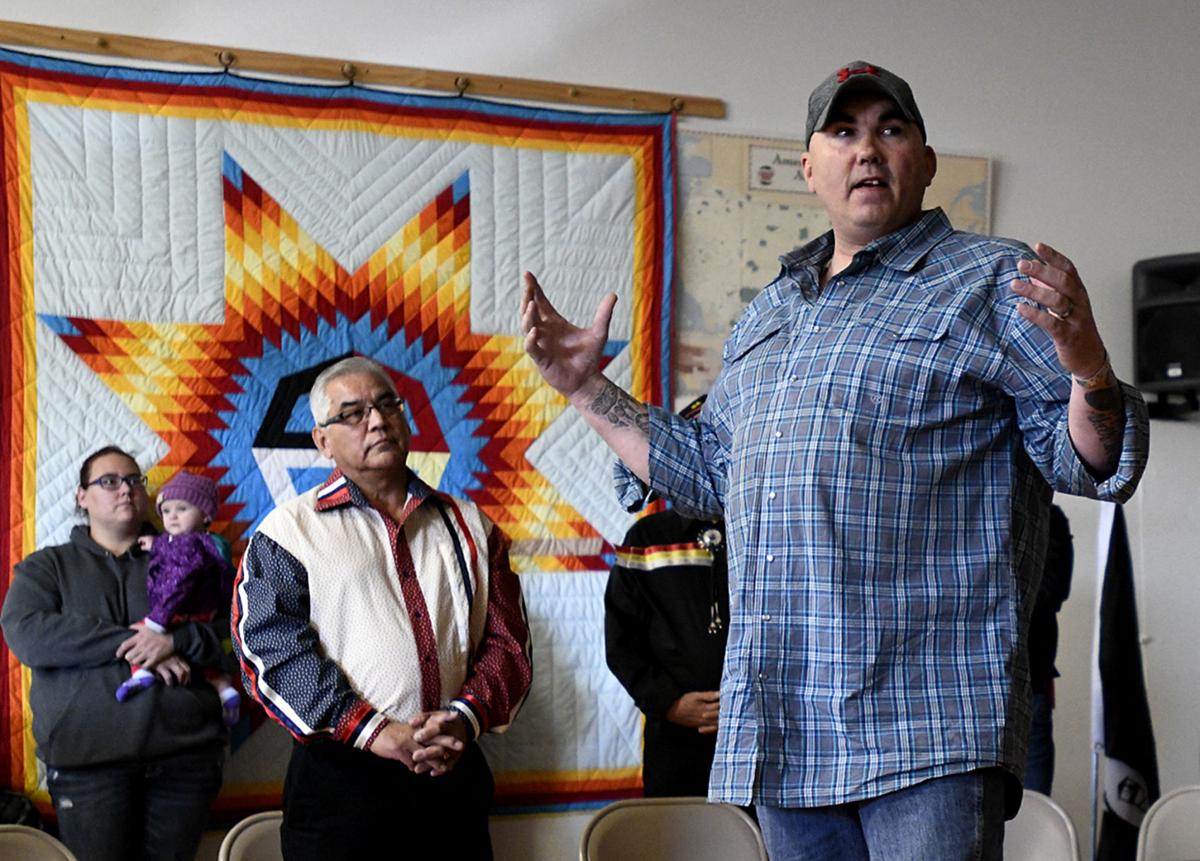 Mike LaFountain, chair of the Little Shell Cultural Committee, speaks to the crowd gathered for the pipe ceremony on Saturday. 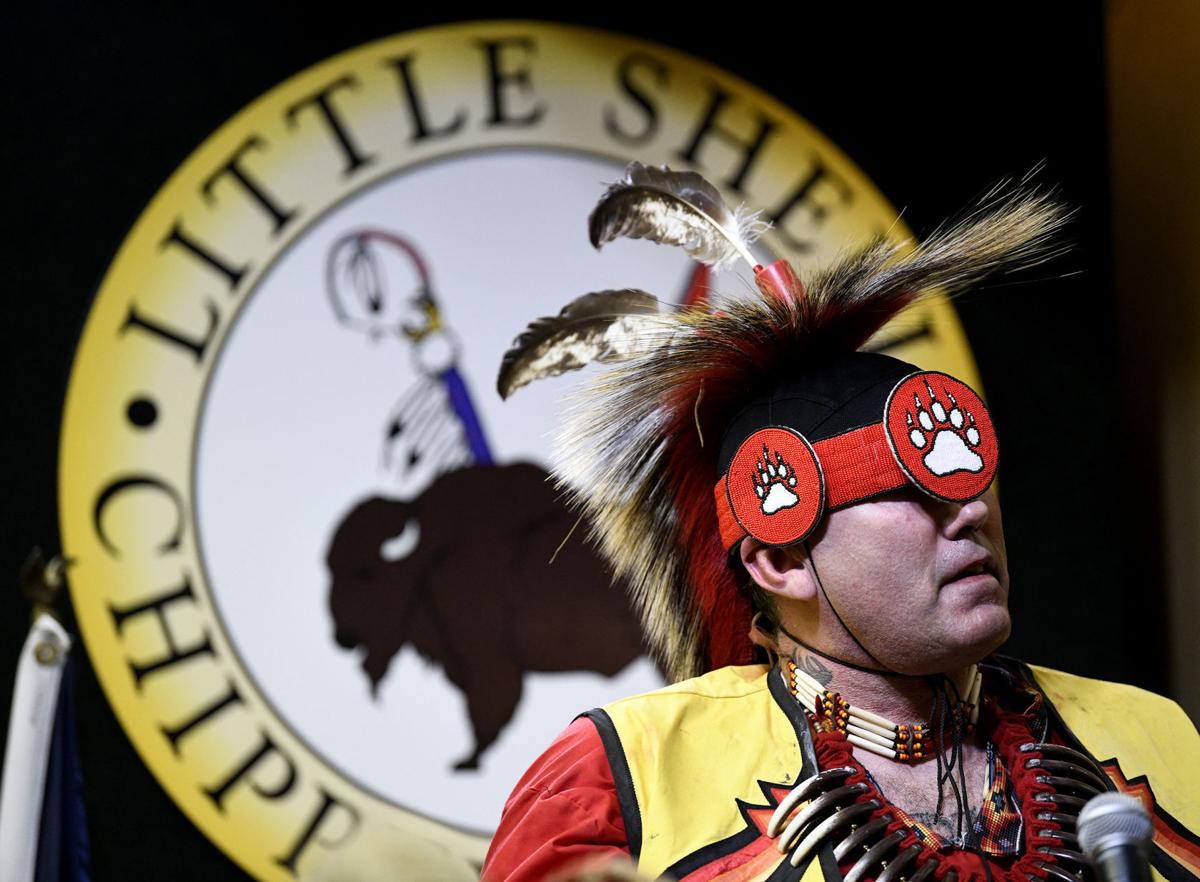 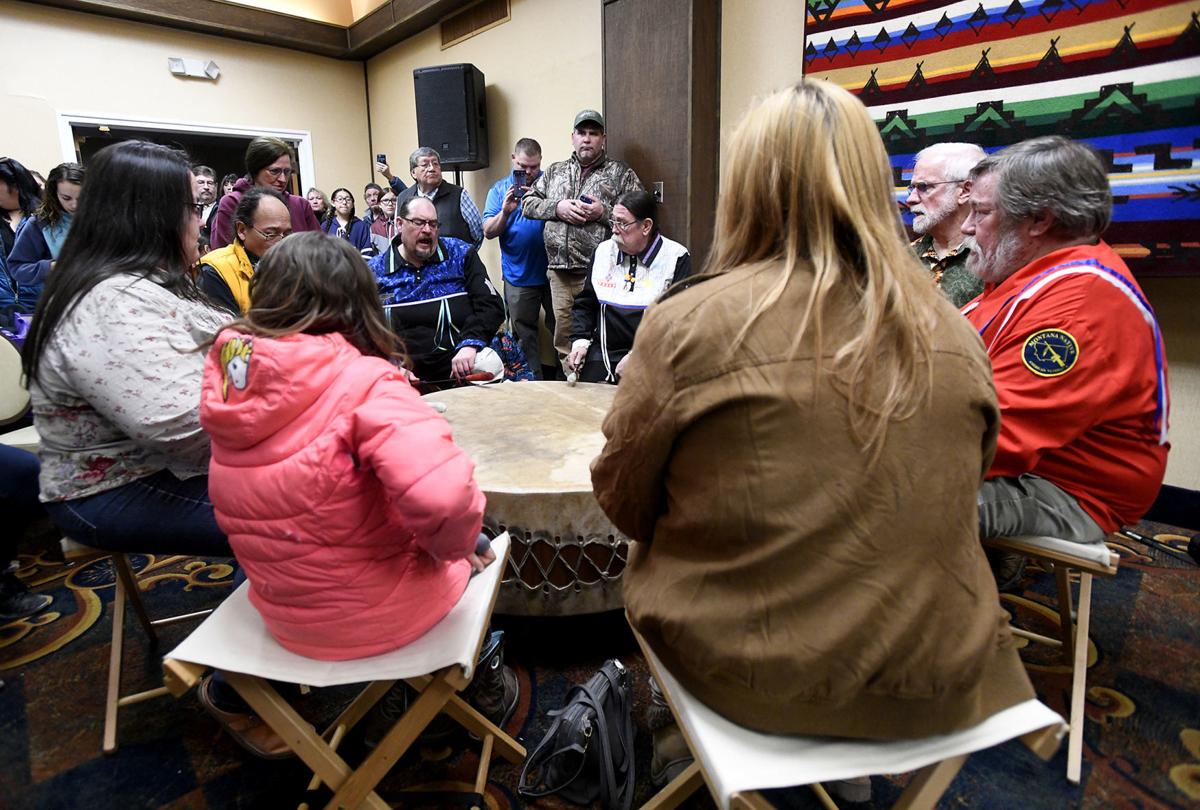 The Magpie Singers and Drummers from Helena perform an honor song during the Little Shell celebration on Saturday evening in Great Falls. 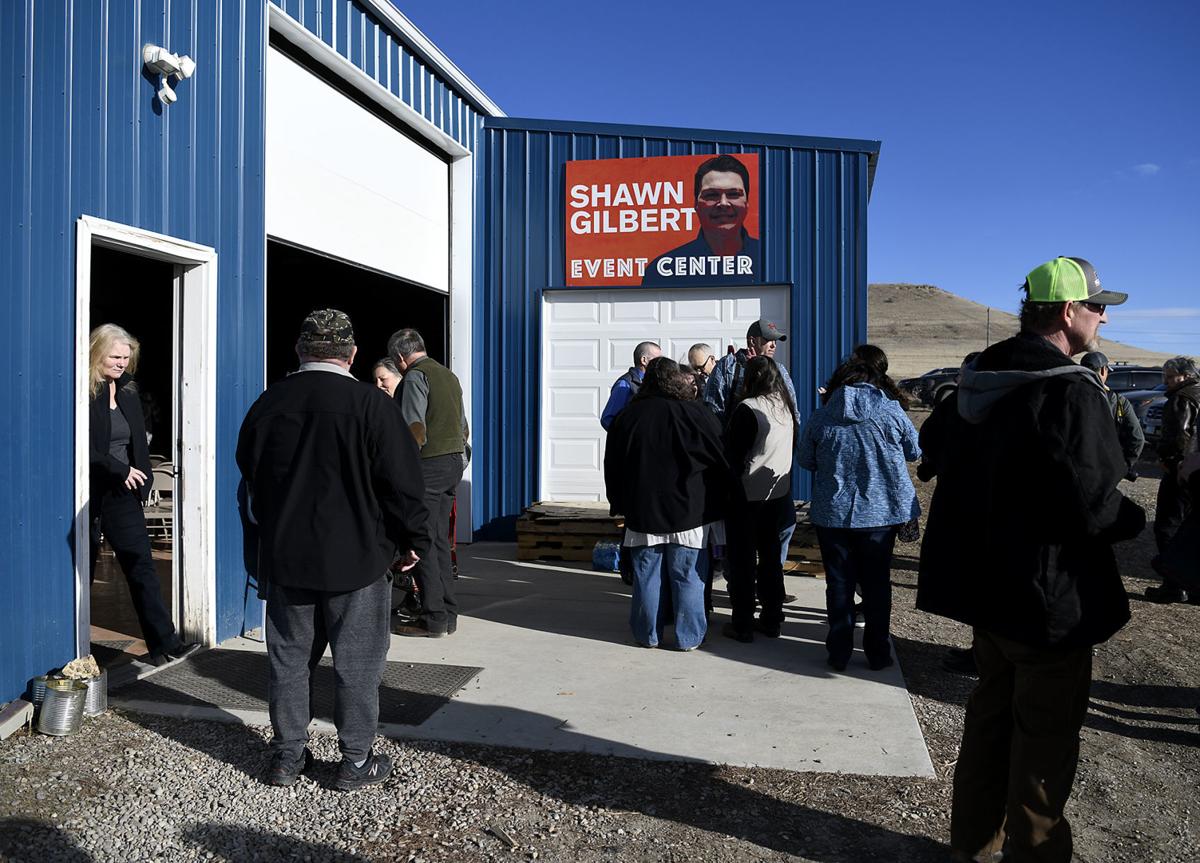 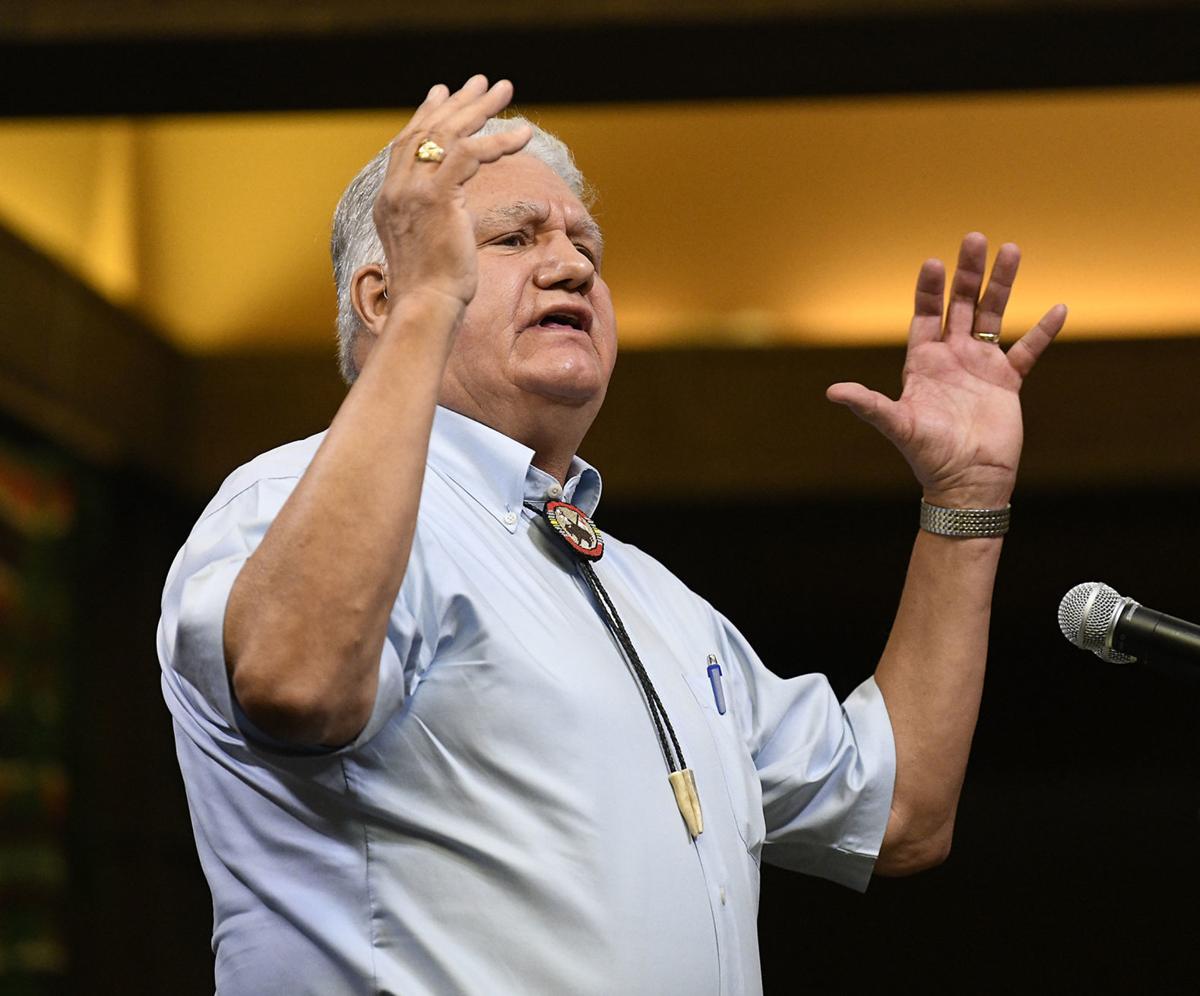 John Gilbert, the former chairman of the Little Shell, talks to the crowd on Saturday in Great Falls.

GREAT FALLS — For decades, members of the Little Shell Chippewa Tribe called the day they would get federal recognition “the day that never comes.”

“The day that never comes finally got here,” said Clancy Sivertsen, vice chairman of the Little Shell Tribal Council. On Dec. 20, 2019, the Little Shell gained federal recognition, with the promise of land for a reservation and access to the same status and federal benefits that the other 573 federally recognized American Indian tribes enjoy. On Saturday, it was time to celebrate.

“We are building a country now,” Mike La Fountain, chair of the Little Shell Cultural Committee, told more than 100 guests who squeezed into the tribe’s event center for a noon pipe ceremony, “ … so please be patient.”

Patience has been a necessity for the Little Shell Chippewa. In 1892, their leader, Chief Little Shell, was among the Chippewa living in what is today northern North Dakota and Minnesota, when a federal commission sought to negotiate the release of 9.5 million acres of land for $1 million.

“The federal government wanted to buy all that land around at 10 cents an acre,” Sivertsen said, “and Chief Little Shell said ‘No, we hunt on this land, we live here, and I'm not selling it for 10 cents an acre.’” But while he was away hunting, an agreement was reached with other Chippewa chiefs and federally appointed tribal negotiators, and Little Shell’s band of Chippewa lost their land and official standing.

In the decades that followed, even as they dispersed across Montana and beyond, the Little Shell clung to their culture — and the dream of official status.

“Recognition was always our No. 1 issue,” said former Tribal Council member Darrel Koke Rummel. They had been working on it, she said, “since my great-grandparents were involved.”

In the 1930s and '40s, the Little Shell repeatedly petitioned the federal government for recognition. In 1978, they submitted another petition to the federal Bureau of Indian Affairs, where it languished for nearly four decades. They submitted tens of thousands of pages’ worth of records to back up their claim, but none of these efforts succeeded.

Meanwhile, the Little Shell made progress on other fronts. The state of Montana recognized the tribe in 2000, and in 2007 the first federal recognition bill was introduced in Congress.

“It’s very, very hard to obtain federal recognition and it's very hard through the legislative process,” said Joshua Clause, a principal at Washington, D.C., law firm Clause Law PLLC, who’s been the tribe’s pro bono counsel for about a decade. Their effort was unique, he said, because the tribe’s effort had the backing of all three branches of the state’s government, its congressional delegation, the other tribes and localities. “I used to make this joke … I've run out of people to ask for support letters.”

“Until Sen. Lee from Utah blocked it, you could feel the excitement start to build, and then when he turned it back it was just a huge letdown.” Sivertsen remembered.

“This year, we didn't get real excited, we kept working on it. We knew it had a ways to go, but like I said with our lawyer back there, Josh Clause, our senators and congressman, they were working hard for us, and Chairman (Gerald) Gray was there several more times.”

The effort paid off. The Little Shell Tribe of Chippewa Indians Restoration Act of 2019 was attached to the must-pass National Defense Authorization Act, which passed both houses of Congress and, on Dec. 20, was signed into law by President Trump. Since then, Sivertsen said, he’s been “floating.”

The Act makes the Little Shell eligible for the federal benefits available to other federally recognized tribes. It also requires the Secretary of the Interior to take 200 acres of land into trust for them. “The biggest thing with recognition,” Sivertsen said, “is the dignity of the people and saving the culture for the tribe.”

As he spoke, Little Shell members and supporters were streaming into the tribe’s Great Falls event center. One of them, Raul Juarez, had driven all the way from Michigan. “I just hope it makes things better for our people,” he said, adding that recognition “definitely makes you feel better about yourself. You’re formally recognized.”

“Our culture hasn’t died out, it just continues,” said Clyde Landrie, who goes by the Little Shell name Keeper of Warriors and had come from Billings with his wife Debra. “Now, it’s going to get even bigger.”

Little Shell tribal enrollment currently stands at about 5,400, and Saturday afternoon’s pipe ceremony drew between 100 and 150 people, making it the largest gathering of tribal members that the Landries had ever seen. However, it didn’t even come close to the Saturday evening event, held at the Great Falls Holiday Inn. Hundreds filled the hotel’s ballroom, with more filling hallways and overflow rooms. Hotel staff estimated 1,000 people altogether attended the event. One of the evening’s speakers, Great Falls Mayor Bob Kelly, joked that “the most important thing I did tonight was call the fire marshal and tell him to take the night off.”

When the crowd had settled and the colors were posted, Tribal Chairman Gerald Gray told them that “tonight we commemorate an effort that no tribe should ever have to go through, but yet we celebrate the effort of so many who have carried this torch for over 130 years.”

“Many have passed that would have loved to see this historic day, and we honor them. We also now have to think of our future generations and build a strong nation for them.”

U.S. Rep. Greg Gianforte presented Gray, the tribal chairman, with a copy of the Act signed by Trump. U.S. Sen. Jon Tester sent a video message congratulating the accomplishment. Sen. Steve Daines was flying into Great Falls and was due to speak later in the evening.

Gov. Steve Bullock, Attorney General Tim Fox, and several other elected officials and dignitaries also voiced praise for the Little Shell — and echoed Gray’s and La Fountain’s calls to build the Little Shell nation. With recognition won, the tribe now faces the challenge of building its own infrastructure and its relationship with the federal government.

“A lot of people think that a switch gets flipped and all of a sudden we can do a lot of stuff. That’s just not how it’s going to play out,” said Missoula-based writer and Little Shell member Chris La Tray after Saturday’s pipe ceremony.

“We've got so much work to do now to get everything set up with the federal government,” Sivertsen acknowledged. “I think one of the biggest ones for our members is the health care to get through (the Indian Health Service) and … get a clinic set up where our folks can start using the health care system.” They also have to begin the process of acquiring the 200 acres of trust land.

La Tray sees a more fundamental challenge. “We need to engage young people,” he said. “Generally at quarterly meetings the same 20 or 30 people show up and they’re my age or older.” He’s eager to support that effort through storytelling. And like many attendees, he’s optimistic that, more than a century after the Little Shell were scattered, they’ll start to form new bonds.

“There are more than I know of” in Missoula, he said. “I see the license plates, I see the occasional T-shirts, but there’s not a community that really meets. I think that’s something that’ll change.” ​

Survival and resilience: Blackfeet mark 150 years after massacre on the Marias

More than 200 people gathered above the Marias River near Shelby on Tuesday to mark the 150th anniversary of a massacre of Pikuni Blackfeet by U.S. troops.

Commemoration honors 'ancestral memories' of Baker Massacre on the Marias

You’d be hard-pressed to find more wanton destruction of a people by government forces in the annals of American history than that which occurred along the Marias River in 1870.

When national news is local and vice versa

The tragic death of basketball superstar Kobe Bryant, his 13-year-old daughter Gianni, and seven other people in a helicopter crash Sunday was…

A Reserve Street community input forum has been set for Wednesday evening in Missoula.

Gerald Gray, chairman of the Little Shell Tribe of Chippewa Indians, hugs Arleen Adams before a pipe ceremony at the Shawn Gilbert Event Center in Great Falls on Saturday. The tribe marked their recent federal recognition with the pipe ceremony and a public celebration later in the day.

Mike LaFountain, chair of the Little Shell Cultural Committee, speaks to the crowd gathered for the pipe ceremony on Saturday.

The Magpie Singers and Drummers from Helena perform an honor song during the Little Shell celebration on Saturday evening in Great Falls.

John Gilbert, the former chairman of the Little Shell, talks to the crowd on Saturday in Great Falls.