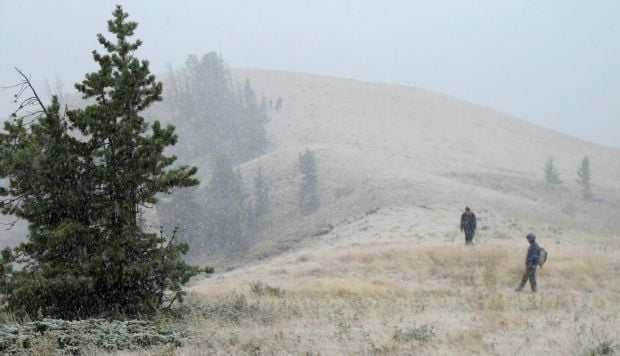 Hikers venture up a ridge on the way to the higher elevations where whitebark pine trees thrive, a harsh environment where they are a keystone species. 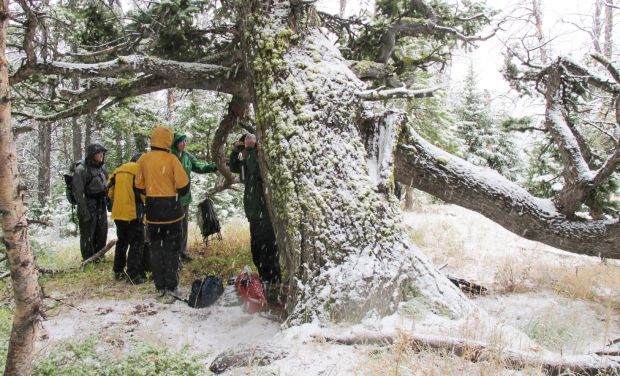 Participants in a hike huddle under the limbs of a Douglas fir tree Wednesday to escape a snowstorm that struck during the outing. 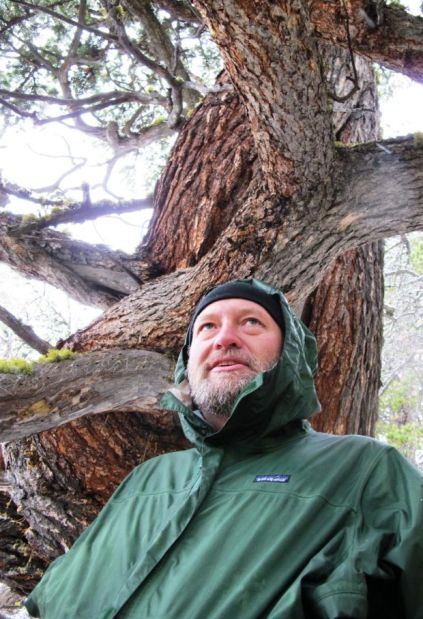 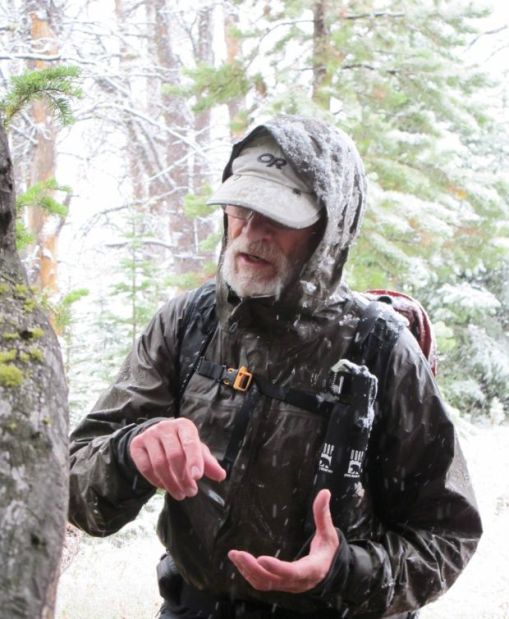 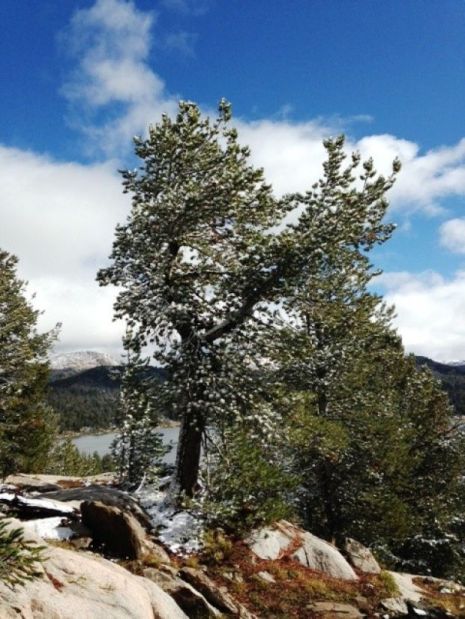 Whitebark pine trees are long-lived, despite the fact that they grow at high elevations where summers are short, winters are long and there is little good soil. 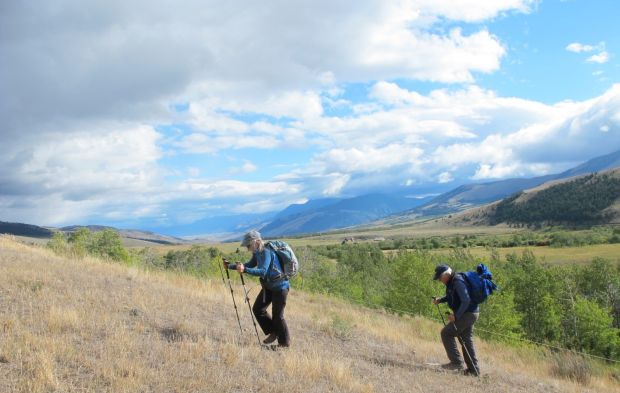 Pam and Bill Bryan of Bozeman trudge up a mountainside in the Tom Miner Basin during a field trip on Wednesday to learn more about whitebark pine trees and the threats they face. 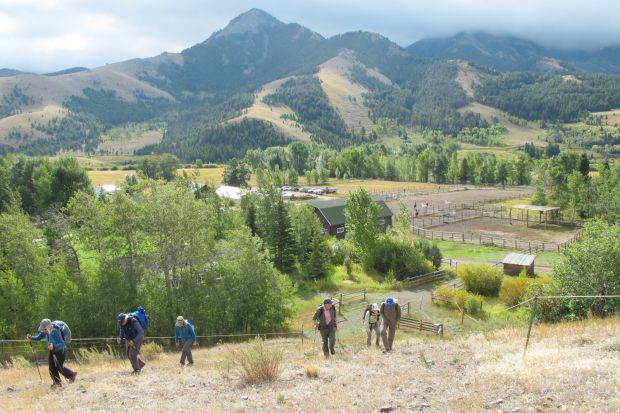 The hike started at the B Bar B Ranch in the Tom Miner Basin and quickly climbed.

TOM MINER BASIN — The soaking wet hikers had several theories about why Jesse Logan and Wally Macfarlane were carrying hatchets in their backpacks: To fend off bears? To end the misery of the clammy cold hike? To lop off frostbitten limbs?

The answer was much less dramatic. The two scientists use the hatchets to remove bark from whitebark pine trees to reveal the mountain pine beetle invasions evident underneath.

“You pull back the bark and it’s an open book of what’s happened,” Macfarlane said, describing channels bored into the tree by the beetle’s larvae, invasions that eventually lead to the death of the tree.

Logan, a retired Forest Service ecologist, and Macfarlane, a University of Utah research associate, were the leaders of a hike up to 9,700-foot Packsaddle Peak in the Gallatin National Forest south of Emigrant on Wednesday. The hike was a prelude to the Whitebark Pine Ecosystem Foundation’s meeting in Bozeman on Friday.

Logan and Macfarlane co-authored a study in 2009 detailing the demise of whitebark pine in the Greater Yellowstone Ecosystem. In 2011 the tree was listed by the U.S. Fish and Wildlife Service as a species in need of protection under the Endangered Species Act, but precluded from listing because other species had higher priority.

Mountain pine beetles, white pine blister rust, fire and the gradual warming of the high elevation environment where the trees live are contributing to their rapid decline, the agency noted.

The occurrence is relatively recent. Working with the Forest Service as the head of the mountain pine beetle project in the 1990s, Logan saw few dead whitebark pine trees at high elevations. But in 2003 he saw an invasion of a whitebark pine forest in Idaho that quickly escalated and resulted in the collapse of the entire isolated forest by 2005.

“They are a hell of a survivor, but a terrible competitor,” Logan said.

The oldest whitebark pine was dated at 1,300 years, but it’s hard or impossible to age them because the center of the tree often rots out while the outside continues to live.

“I think that whitebark pine, because of the habitat it is in, is the greatest expanse of old-growth forest on the planet,” Logan said. “I have no evidence to support that, but prove me wrong.”

Whitebark grow at high mountain elevations in the Rocky Mountains where wind, cold and thin topsoil create a harsh and difficult environment.

Mcfarlane’s aerial surveys put the whitebark population in the Greater Yellowstone Area (roughly 22 million acres) at 1.5 million acres of trees with the most healthy populations in the Beartooth Mountains of Montana and Wyoming’s Wind River Range.

The trees are considered a keystone species because of the animals and plants they support. Most notably, the trees produce a high-protein nut in their cones that attract grizzly bears in the fall. The cones are sometimes stored in red squirrel middens in the ground that can be as large as a double-wide trailer house, Macfarlane said.

Because the trees are at high elevations and attract bears, they are seen as a key to keeping grizzlies away from people during the fall when they are consuming loads of calories before hibernating.

But the trees also foster soils for other trees and gather snow and shade it for slower melting. In addition to feeding squirrels and bears, the whitebark’s seeds are a key food for Clark’s nutcrackers. The birds cache the seeds across the landscape, remembering up to 1,000 sites, Logan said. By spreading the seeds, the birds help the plant regenerate and move to new sites.

One author wrote that in concert, the whitebark pine and Clark’s nutcracker build ecosystems, Logan said.

Because the trees grow out of the view of most people, Macfarlane worries that the general population isn’t concerned that the trees are disappearing.

“I think 10 years down the line, without us documenting it, nobody will know what’s happening,” Macfarlane said. “These are vulnerable ecosystems, and we’re losing them now.”

Adam Markham, director of the Climate Impacts Initiative for the Union of Concerned Scientists, participated in the hike into Tom Miner Basin and, on Friday, visited stands of whitebark pine in the Beartooth Mountains between Cooke City and Red Lodge.

“We saw clear evidence that the mountain pine beetle outbreak is still going strong in the whitebark pine forests of the Yellowstone area,” he wrote in an email. “On the Beartooth plateau east of Cooke City, it was tragic to see majestic trees that have survived everything nature could throw at them for 700 or 800 years succumbing to fresh beetle attacks. Warmer winters and longer summers have allowed the beetles to expand into areas where they couldn't previously get a grip. Now some of the last, best places where the old whitebarks survive are under immediate threat.”

Logan said it’s an exciting time to be an ecologist, but it is also a frightening period.

“Things have speeded up so fast that the ecosystem is coming uncoupled,” he said. “All of these species that adapted to century time scales” are falling apart in a matter of years.

Although the Forest Service is planting whitebark pine seedlings to ensure a seed stock and attempting to find a hybrid that is more resistant to disease and bug infestations, warmer temperatures may eventually remove all of the favorable habitat for the trees making the work irrelevant.

“The whitebark pine really established this (high elevation) ecosystem,” Logan said. “It’s the foundation. If you remove the foundation, you don’t have much of a structure.

“They are also called the rooftop of the Rockies. So we’re losing both the foundation and the rooftop. That’s not a good situation.”

Research: Grizzlies not so dependent on pine nuts

Hikers venture up a ridge on the way to the higher elevations where whitebark pine trees thrive, a harsh environment where they are a keystone species.

Participants in a hike huddle under the limbs of a Douglas fir tree Wednesday to escape a snowstorm that struck during the outing.

Whitebark pine trees are long-lived, despite the fact that they grow at high elevations where summers are short, winters are long and there is little good soil.

Pam and Bill Bryan of Bozeman trudge up a mountainside in the Tom Miner Basin during a field trip on Wednesday to learn more about whitebark pine trees and the threats they face.

The hike started at the B Bar B Ranch in the Tom Miner Basin and quickly climbed.