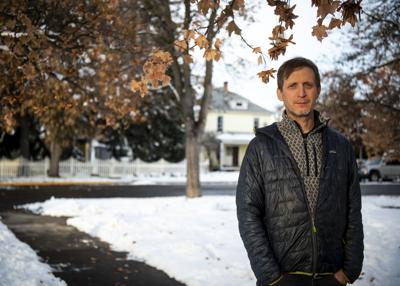 That eagle might be one he radio-collared while working in Alaska’s Denali National Park. The collar traces the bird’s migration path between the Arctic and the Lower 48 states. That trace entwines with about 50 other eagles the wildlife biologist has collared for his U.S. Fish and Wildlife Service study. And that study now joins hundreds of other research projects from around the planet in a new Arctic Animal Movement Archive. When all those radio-collared eagles, caribou, whales, wolves and other critters get their travels animated on a computer map, it looks like the whole Northern Hemisphere is breathing in and out.

“I have a couple hundred-thousands of location points for eagles,” said Lewis, who’s working on a doctorate degree at the University of Montana. “With the archive, we have millions of locations. Now you can ask these larger-scale questions and see bigger-scale changes. Over generations of eagles, that really leverages what you can do.”

The Arctic Animal Movement Archive project has 160 co-authors, including Lewis. At the bottom of the list is UM wildlife biologist Mark Hebblewhite.

“The first name on the publication is the lead author of the study,” Hebblewhite explained. “The last author is the research group that led the work.”

What Hebblewhite, Lewis, and their 158 colleagues did was coalesce three decades’ worth of movement studies on 86 different animals from almost every nation with Arctic wildlife research activity. And they broke through the language and methodological boundaries so every study uses the same measuring sticks. Meters or feet, minutes or hours, Mongolian or American, any participating researcher can go to the archive and look for planetary patterns.

The archive goes live as climate researchers find increasing evidence that the Earth’s polar regions are warming almost twice as fast as lower latitudes. When the animal movements overlay climactic shifts over time, the scale of change is profound.

“These climate-induced changes on animal movement are operating right here in Montana,” said Hebblewhite, who last week was hunting elk in a T-shirt during a record-setting November heat wave. “The implications of the study is: This is our future. We need to make policy makers in the south care about impacts in the Arctic. It seems far away, but these are the kinds of changes we’re about to see in Montana in 10 or 20 years.”

A lot of NASA climatic satellite research underpins the Arctic Animal Movement Archive. Study co-author Gil Bohrer of Ohio State University helped link the space agency’s records of change in the Arctic — the places turning green earlier as well as the places going brown for lack of rain and snow — with an international wildlife movement database called MoveBank that he helped found.

“These are all things we can observe from space,” Bohrer said. “NASA has a very good sense of environmental conditions. We wanted to match that with animal movements, and that can only be done with collaboration.”

Diplomatically arranging that coordination was probably harder than getting a caribou to wear a radio collar. The data on just one particular herd involves two nations, eight wildlife management agencies and six tribal governments in the middle of one of the most controversial oil-prospecting regions of the Arctic. Other studies come from governments that may or may not have good political relations, even as their scientists talk back and forth across the boundaries.

“The changes we documented are old news to the people who live in the far north,” Hebblewhite said. “They’re seeing robins and red foxes (that never previously migrated that far north). You can wave your arms all you want, but you can’t deny when birds show up later and caribou give birth earlier that animals are changing their movements in response to climate change.”

Hebblewhite studies caribou among other things, and his records of caribou migrations across the North American Arctic are one of the biggest single data collections in the archive. Knowing where caribou migrate has immediate practical value for analyzing something like whether the Porcupine Caribou Herd passes through a potential oil exploration site in the Arctic National Wildlife Refuge. Knowing when they migrate might provide a solution by timing exploration activity for periods when the caribou aren’t moving by.

Knowing those factors over a long time period reveals more troubling changes. Caribou populations have been crashing across the Arctic, with Quebec’s George River herd falling from 750,000 individuals to barely 8,000 during the study period. One possible factor Hebblewhite has explored is the changing date when those caribou give birth to their calves.

Pregnant caribou all usually give birth within days of one another, and usually on the same day of the year their mothers produced them. That date evolved to coincide with the burst of new plants in the spring.

Hebblewhite found that warming conditions in the Arctic have melted out the caribou spring feeding grounds progressively earlier, and the caribou have responded by giving birth more than 10 days sooner than they did 20 years ago. But that puts those vulnerable new calves on the ground before the plants have sprouted and in springtimes where newly unpredictable winter storms still occur.

“There’s a risk if you’re born too early,” Hebblewhite said. “If your mother migrates to summer range early and gives birth and it snows, you may die as a calf.”

Lewis said having the Arctic Animal Movement Archive was like putting a book of his study into a global library of related material. His research on golden eagles revealed a lot about where they spend summers and winters, especially when combined with research from the international community around the Arctic Circle.

The archive has revealed that in the past 25 years, the golden eagles Lewis sometimes sees flying through Missoula on their way to and from the Arctic have shifted their migration schedule by two and a half weeks. Knowing the ages of those eagles, he found that older birds have not changed their migration patterns much, while younger ones have started showing up earlier. But those young eagles are arriving before many of their usual food sources are available to eat.

“We think of animals as static, but everything — people included — are evolving constantly,” Lewis said. “They respond to the environment. We just can’t see it. But the climate is changing much faster than it would naturally, and animals are trying to adapt to that. That can result in timing mis-matches when they’re breeding. The animals are trying to keep up, like an arms race.”

This kind of animal movement research has implications far beyond the Arctic Circle. The same week the Arctic Animal Movement Archive study was published, U.S. Geological Survey wildlife biologist Matt Kauffman and the University of Wyoming released a wide-ranging study of animal migration patterns in the Lower 48 States.

“Our report takes data just like the Arctic archive but for pronghorn, mule deer, moose and bison and turns it into corridor maps,” Kauffman said from his office in Laramie, Wyoming. “With that map file, you can lay it next to other public land maps from the Bureau of Land Management or Forest Service and identify threats to movement like roads and fences or droughts or big ranches at risk of subdivision. Then we can come up with conservation solutions.”

Stay off the grille: Montana forges solutions to wildlife roadkill

The USGS migration mapping project will soon encompass 11 western states, including Montana. Observing how animals respond to forced changes can benefit human planning, according to Matt Skroch, a wildlife project director for the Pew Charitable Trusts.

“Whether you’re looking at polar bears in the Arctic trying to find enough sea ice, or on the high desert of Wyoming where maybe the rain didn’t fall during the spring mule deer migration, we have a lot to learn about how animals migrate and what that means for us in a changing world,” Skroch said. “Humans are incredibly adaptable and resourceful, but there are limits to our ingenuity that we are starting to come to terms with. We see humans begin to migrate now across the landscapes as a result of climatic events. That’s a very different type of migration than wildlife, but there are some similarities in how we both seek resources that benefit our lives.” 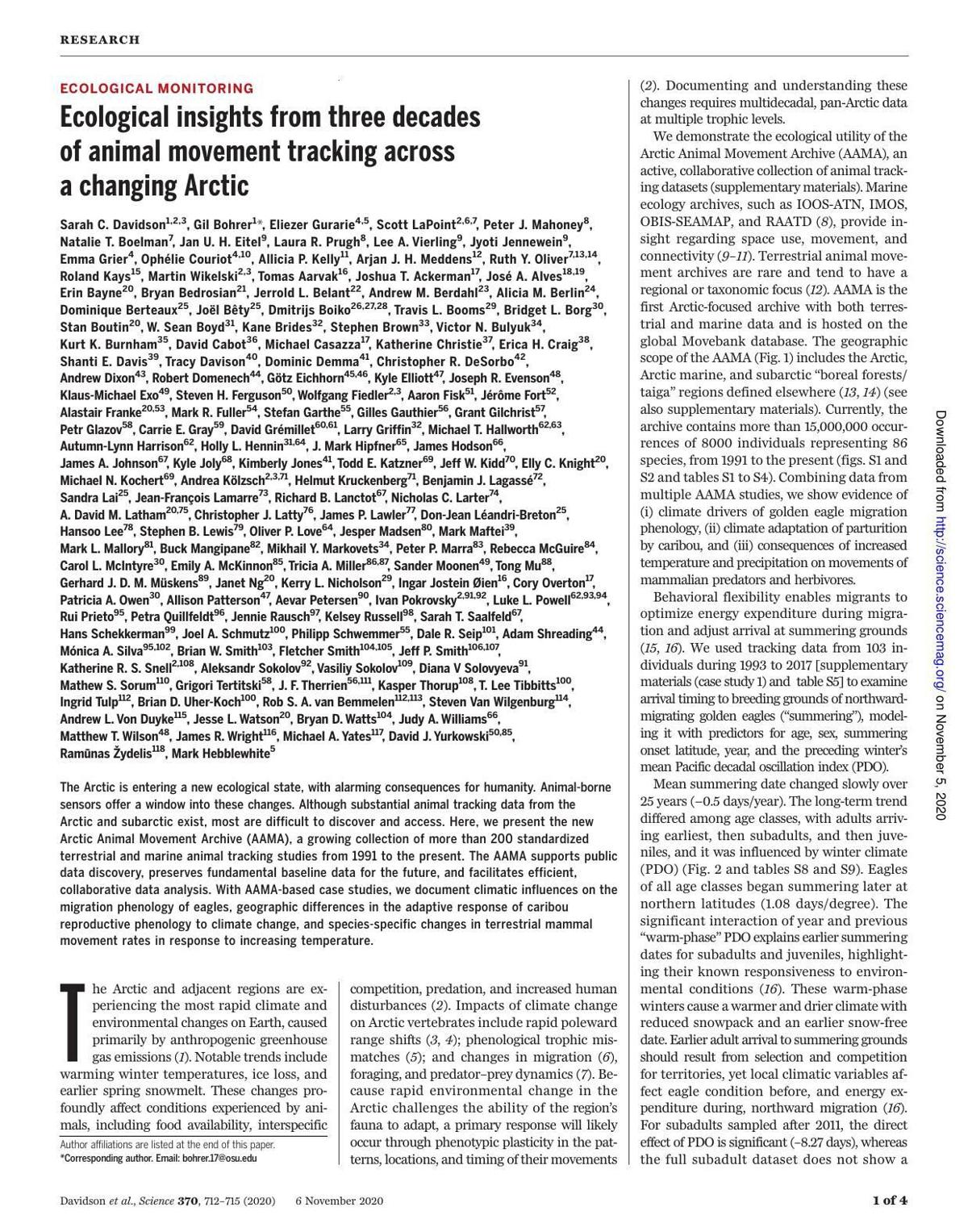 US and Japanese astronauts begin spacewalk

US and Japanese astronauts begin spacewalk

The way Americans value wildlife has shifted away from hunting and fishing traditions, but wildlife agencies remain one of the most trusted pa…

Two killed in I-90 crash near Bonner

A man and child died Saturday night after their vehicle went off I-90 and vaulted into the Clark Fork River, where it lay submerged until responding agencies were able to pull it out, according to Montana Highway Patrol.

Fauci to speak during University of Montana lecture

Dr. Anthony Fauci, the country’s leading infectious disease expert, will talk with Montana audiences as the headlining speaker of the 2021 Mansfield Lecture in February.

The Boone and Crockett Club, known for judging hunters’ trophy animals, has declared climate change puts the world’s wildlife at risk and must be combatted.

Shopping local during the pandemic holiday

Local stores are looking to keep shoppers at ease during the holiday season with safety precautions and extra services.

Footloose and unaffiliated wolves don't often integrate with established packs, even when there's room for them to do so.

A battle between youth and government over climate change could be won before one of two courts: law or public opinion.

Monday’s wind warning fizzled out shortly before dawn, but the rest of the week can expect a return of winter weather.

Scott Peryam was walking around the top of Hillview Way on Monday when he spotted something much different — a possible pair of wolves. 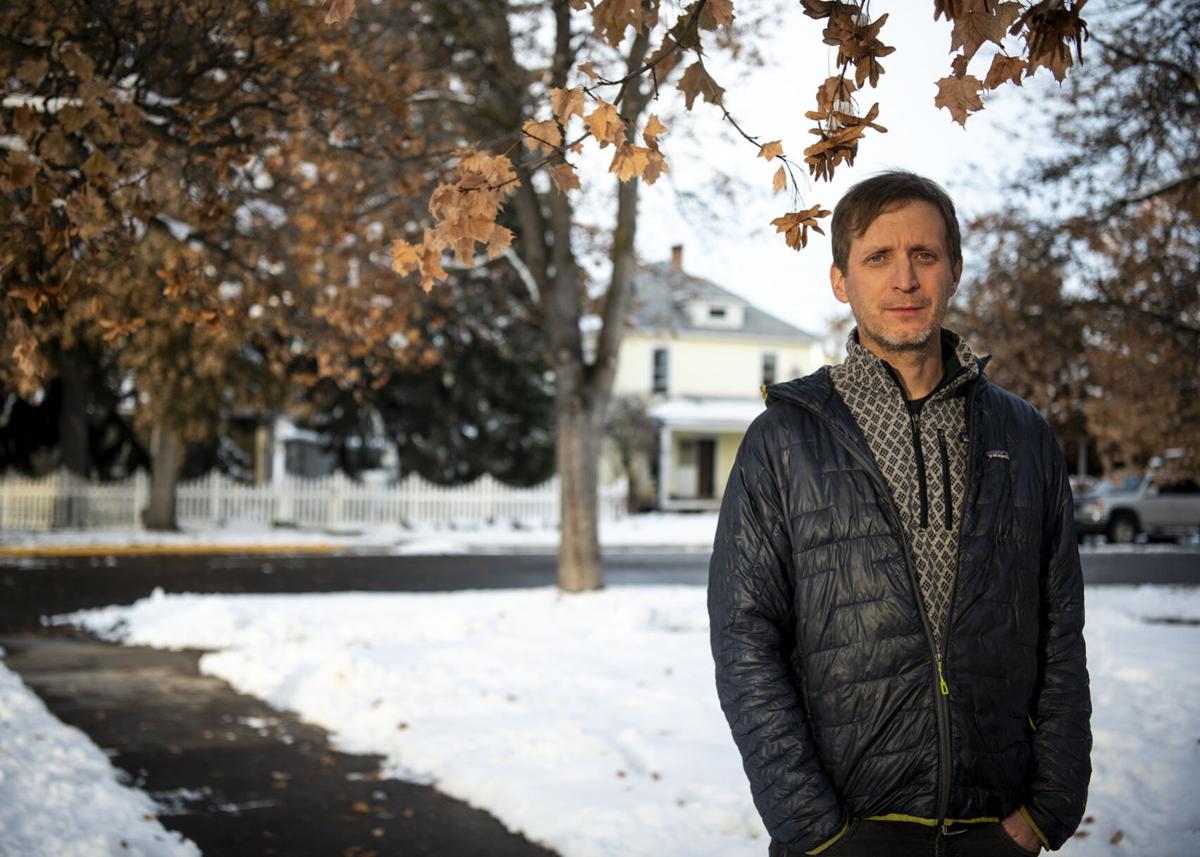 Mark Hebblewhite, a researcher at the University of Montana, at his home on Thursday. 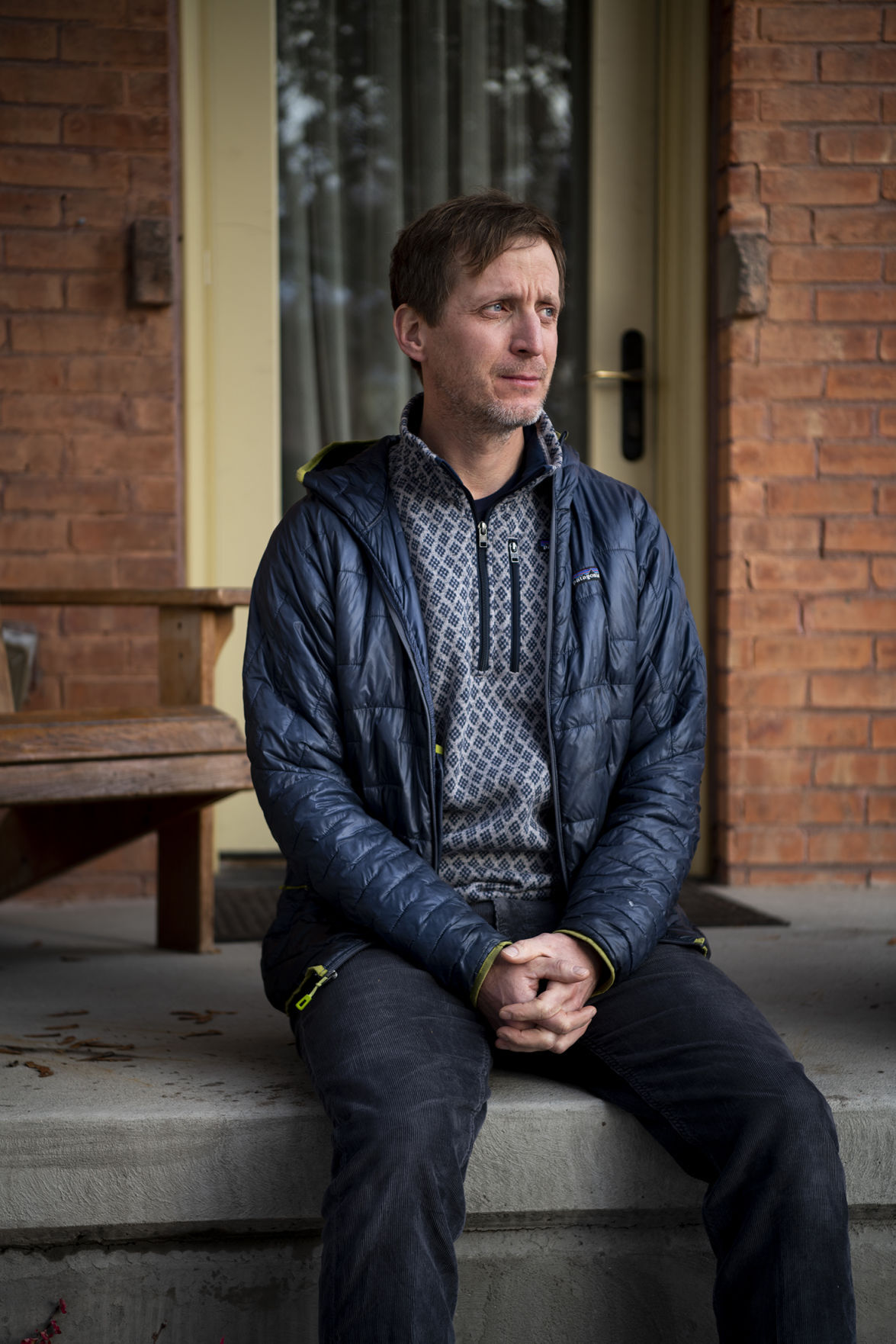 Mark Hebblewhite, a researcher at the University of Montana, at his home on Thursday.

This animated map shows the seasonal movements of seabirds and waterbirds, raptors and shorebirds, and terrestrial and marine mammals throughout the polar regions of the Earth. Migration patterns appear as if the planet is breathing animals north and south, according to University of Montana wildlife biologist Mark Hebblewhite. 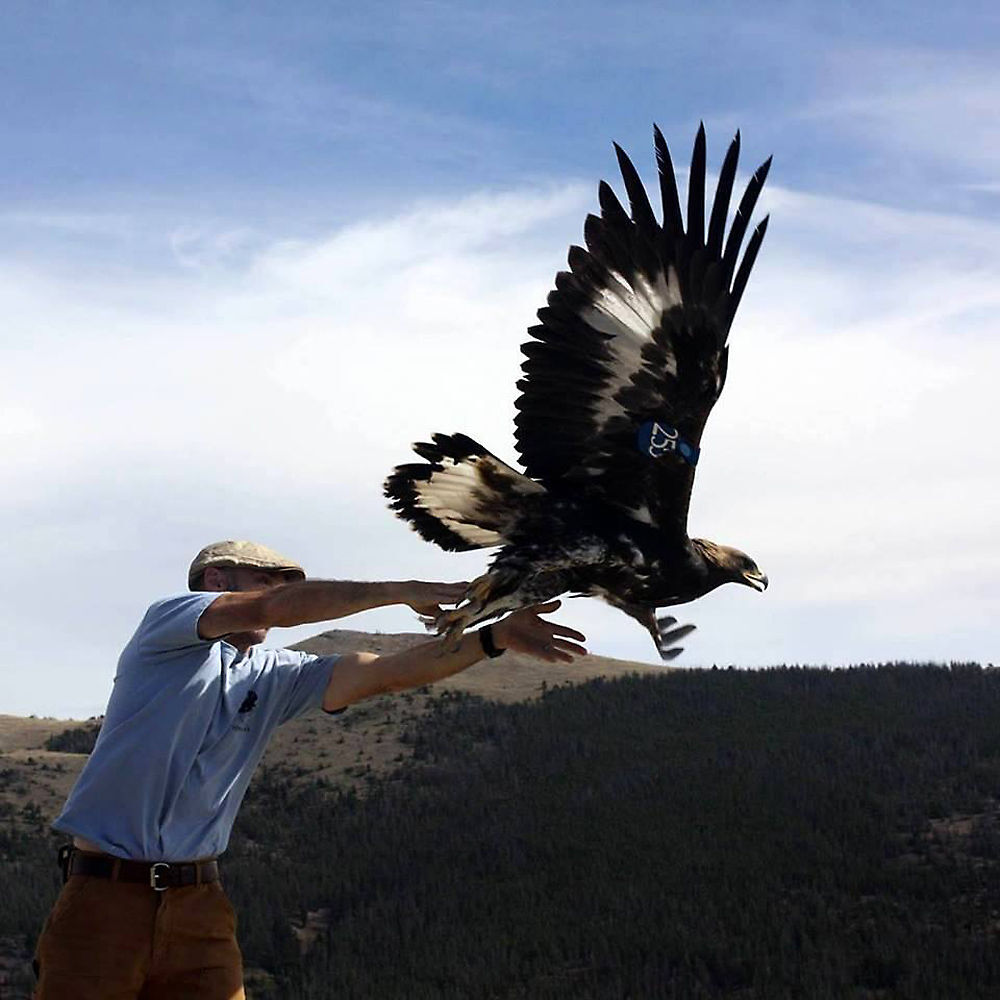 Raptor researcher Rob Domenech was a co-author on the Arctic Animal Movement Archive study. His radio-tagged eagles have been tracked from Montana mountaintops to above the Arctic Circle. 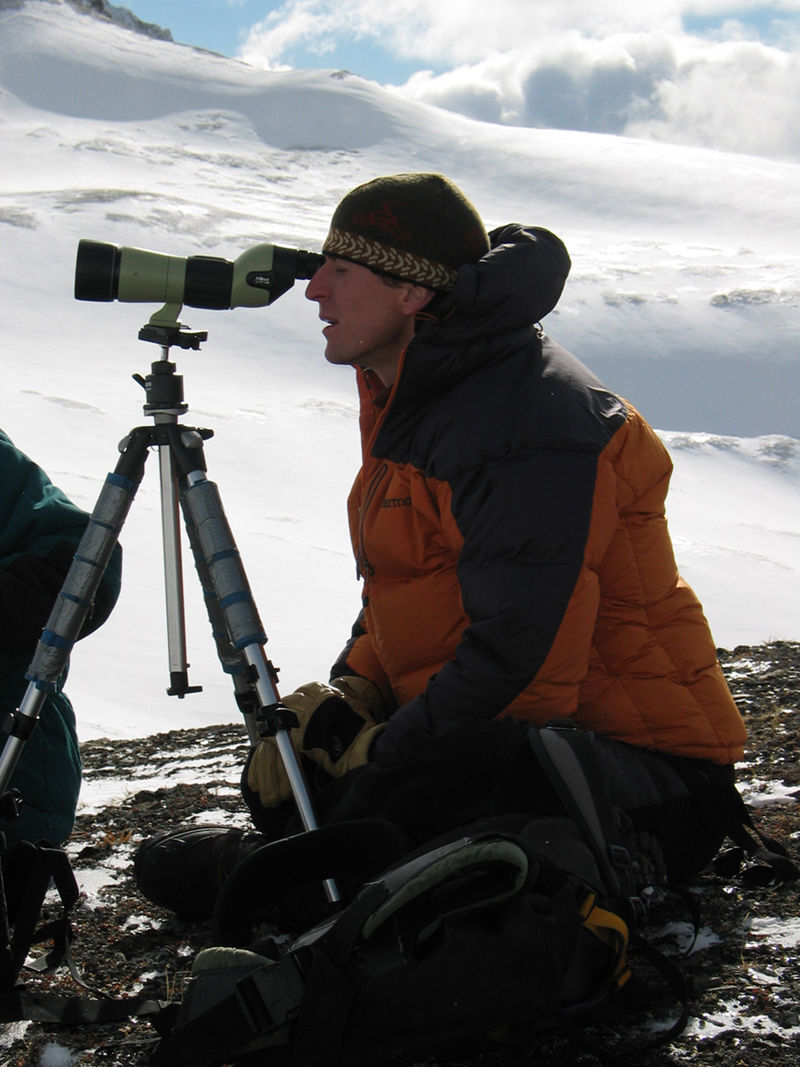 University of Montana wildlife biologist Mark Hebblewhite scans for caribou during an arctic research project on animal migration. His database on caribou activity is now part of the Arctic Animal Movement Archive, one of the world's largest collections of wildlife reactions to climate change.