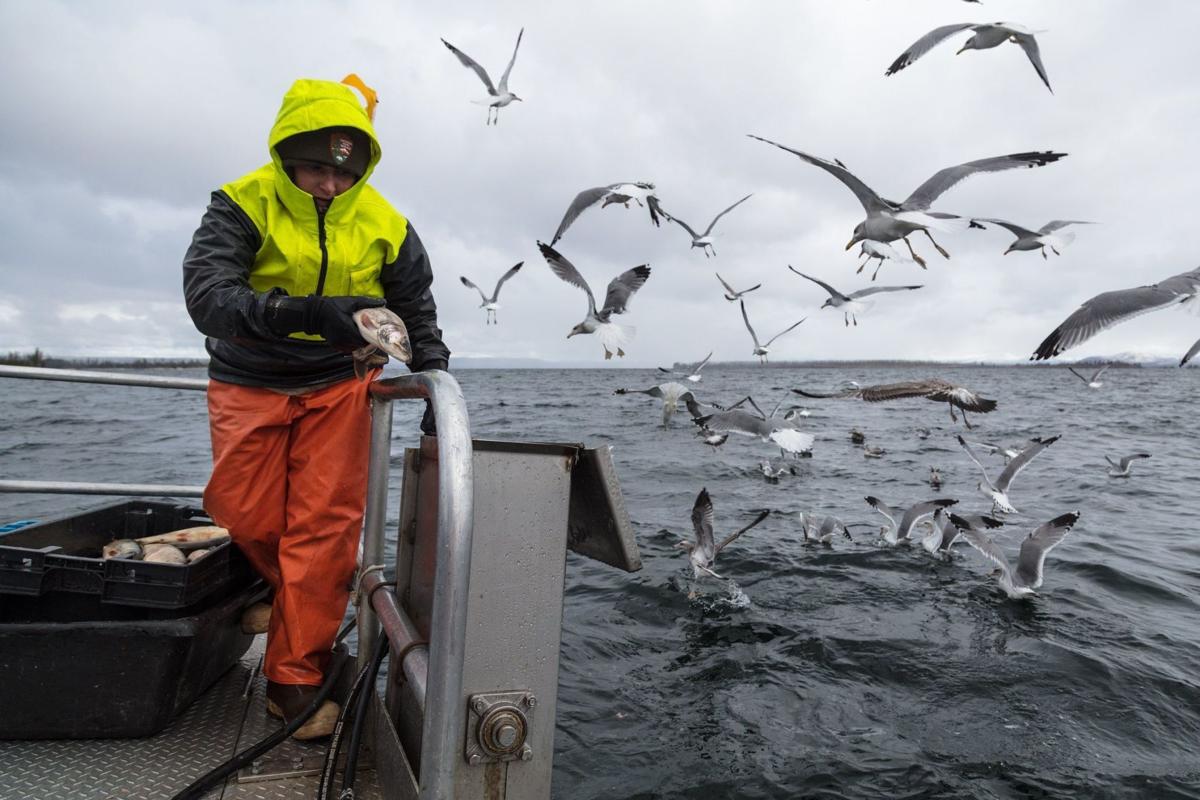 A fishing crew member on Yellowstone Lake tosses lake trout into a grinder that attracts seagulls in 2017.

Mother Nature generally has the last say on when it’s time to pack up and leave in Yellowstone National Park.

“Sometimes it’s scary getting those big boats out of there before it gets too snowy,” he said.

Nature is also trying to block the park’s lake trout suppression efforts with the invasive fish’s ability to compensate for lost adults by producing more offspring.

“We netted 325,000 lake trout this year,” Koel said. “This year we surpassed 4 million killed since we started netting in 1995. The adult component of the lake trout population has been reduced by over 80% since 2012. … But they are continuing to produce a lot of young. They are compensating for the removal of the adults.”

Invasive lake trout were discovered in Yellowstone Lake about 25 years ago. The lake trout population exploded and fed on cutthroat trout. The native cutthroat, once numbering in the millions and a key part of the park’s ecology, saw its population crash. Other park animals depending on abundant cutthroat, disappeared from the lake area or changed their diets.

Tributary streams once teaming with spawning cutthroat trout, had few if any migratory fish.

But the remaining 20% of pesky adult lake trout not killed by gillnetting efforts are still finding a way to resupply the lake each year with the predatory species.

“It’s fascinating actually from a scientific perspective,” Koel said. “When you can crush the adult segment of the population but yet over time they are generally putting out as many young as they did to begin with — that’s amazing. But from invasive species management, it’s frustrating.”

To add to the frustration, Koel said the COVID-19 pandemic has caused some budget and housing constraints for the program. One aspect of the program skipped this year that was done in the past was experimenting with killing lake trout eggs/embryos at known spawning sites such as one located near Carrington Island in the West Thumb area of the lake.

Koel and his crew have found success in killing lake trout eggs by dropping organic pellets from a helicopter over spawning beds. The pellets decompose and remove dissolved oxygen from the water long enough to kill the eggs. Within a few weeks, the pellets wash away and the water returns to normal. The treating of spawning beds was put on hold for budget constraints and more study of its efficacy.

One new project that did get the full attention of park biologists this summer was the search for invasive cisco. Finding the illegally planted cisco was called “a double whammy” against cutthroat. A single, hand-sized fish was found in 2019 when technicians pulled up nets intended to capture lake trout. Cisco compete with cutthroat trout by eating the same food.

The worry is that the population will explode similar to the lake trout and harm cutthroat on a second front. Studies on the lone cisco found that it was born in the lake and had parents and siblings as well. Despite searching throughout the summer, park biologists have yet to locate another cisco in Yellowstone Lake.

“There can’t be that many, but they’re out there,” Koel said. “The fish that we caught was born in the lake, we know that. It’s just a large volume of water and a small population. It would be great if it wouldn’t take off and become abundant and just blink out. It’s possible.”

Park biologists hope that cisco blink out similar to other non-native fish planted in Yellowstone Lake in the past. About 100 years ago park managers planted salmon in Yellowstone Lake and later rainbow trout. Neither fish thrived and eventually disappeared.

To track cisco and where they might be hiding out, biologists are taking water samples to collect environmental DNA.

“Those samples have been sent off and we haven’t gotten results back yet,” Koel said. “If we’re going to pick up cisco out there it’s probably going to be with the DNA in the water to begin with. It can guide us to where to do more netting.”

Another way to search for cisco is in the stomachs of adult lake trout.

“We’ve been opening up thousands of stomachs since the cisco was found in 2019 and we have not found a cisco in a lake trout stomach yet,” Koel said. “That’s actually a great way to find out how many are out there.”

Despite setbacks in the program and nature’s ability to keep producing lake trout, Koel remains optimistic. He points to positive signs that the cutthroat trout population is improving, such as grizzly and black bears returning to once abandoned spawning streams to feed during the spring.

“We’re seeing some cutthroat returning to spawn in the small streams around the lake,” he said. “I’ve been up to the Thorofare Region and into Atlantic Creek and we know there are large numbers of spawning fish in the backcountry of the upper Yellowstone River.”

Although the numbers of cutthroat have not reached original park biologists’ goals, the average size of the cutthroat has increased to almost double their size pre-lake trout invasion.

“Our index of abundance is not back to where we originally hoped before the lake trout invaded the lake, but it’s the condition and biomass that has greatly increased,” Koel said. “Now we’re looking much harder at what recovery for cutthroat really means in the age of lake trout. There’s always going to be lake trout in Yellowstone Lake. It could be that the abundance of the cutthroat don’t get back to where they were before the invasion, it’s possible the biomass is already there. There are fewer fish, but the fish are bigger and heavier. It makes the angling awesome.”

Original hopes for the lake trout suppression program was to see the population crash after a few years of intensive gillnetting. Now, Koel says he doesn’t expect a big crash to occur.

“It’s just time,” he said. “It’s not so much as we’ll net them and the population is just going to crash and all of a sudden we’ve won the war. It’s more like it’s a glide path out into the future. It takes time to get to your goal.”

A fishing crew member on Yellowstone Lake tosses lake trout into a grinder that attracts seagulls in 2017.