Become a Member
Read Today's E-edition
Share This
Imagining the Great War, over a century later
0 Comments
Share this
1 of 5 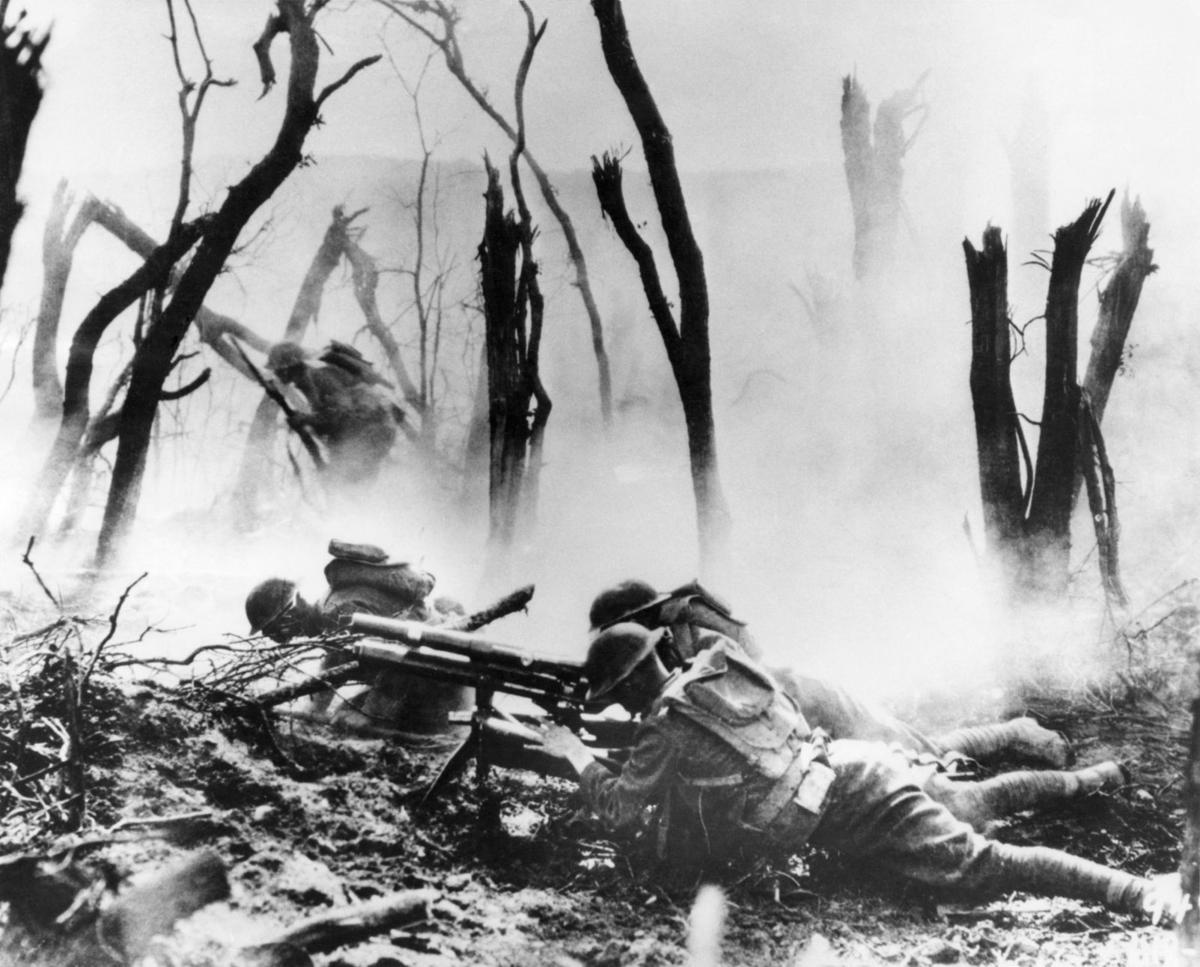 A U.S Army 37mm gun crew mans its position during the Meuse-Argonne offensive in France. 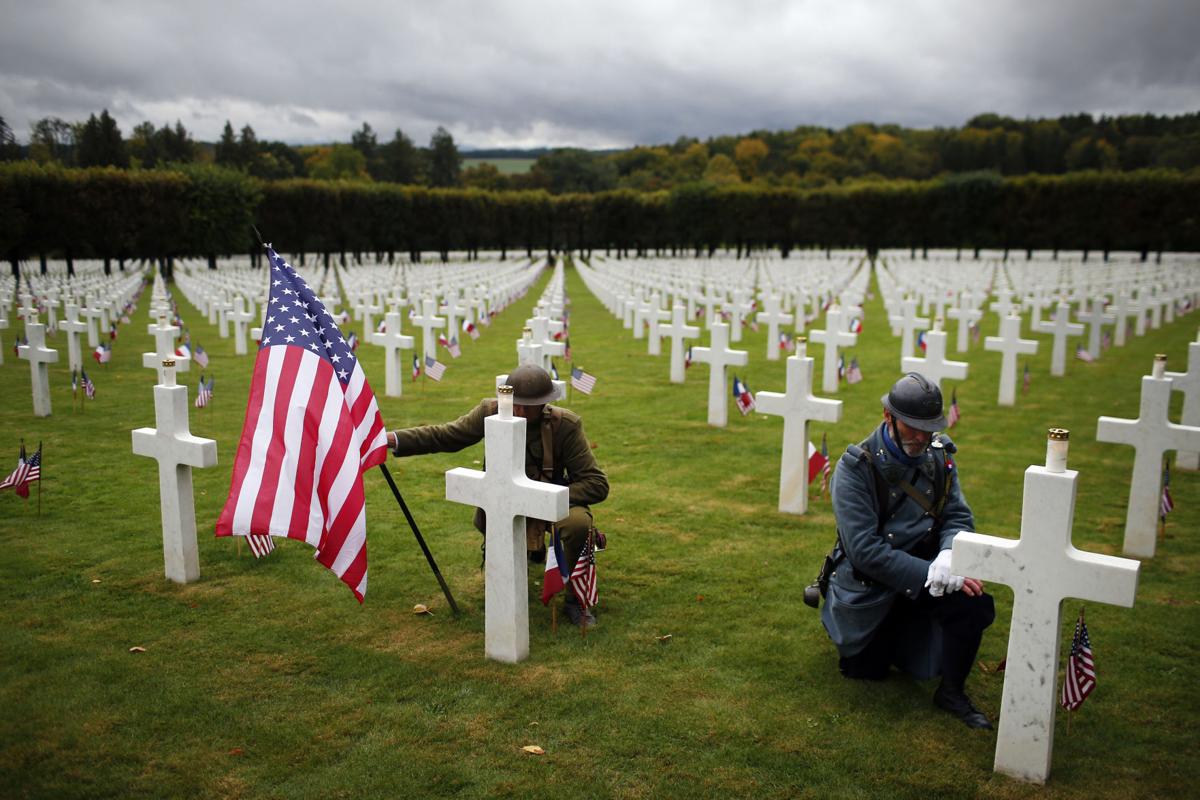 Men in World War I military uniforms pose in the Meuse-Argonne cemetery, northeastern France, during a remembrance ceremony in 2018. 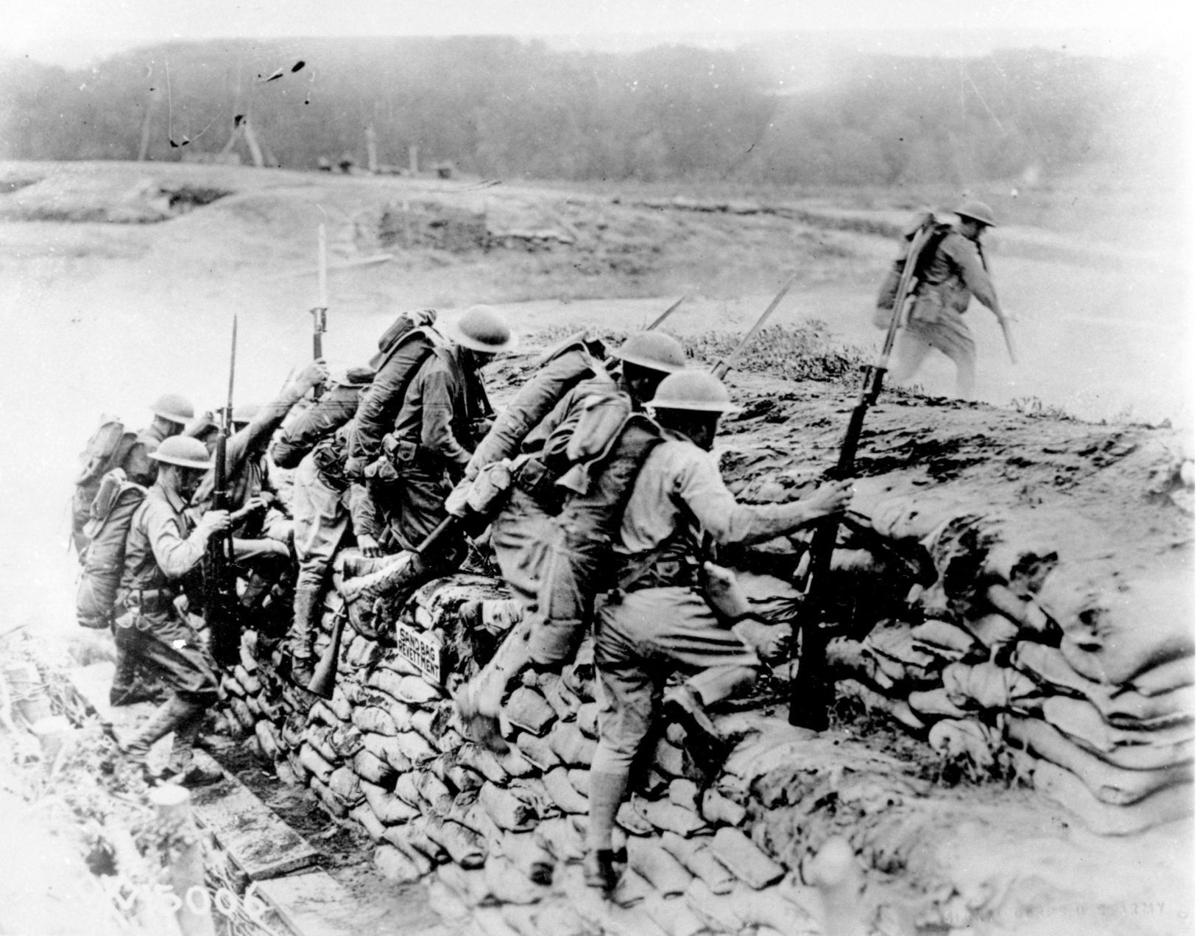 American troops with fixed bayonets climb over a sandbag revetment in France in 1918. 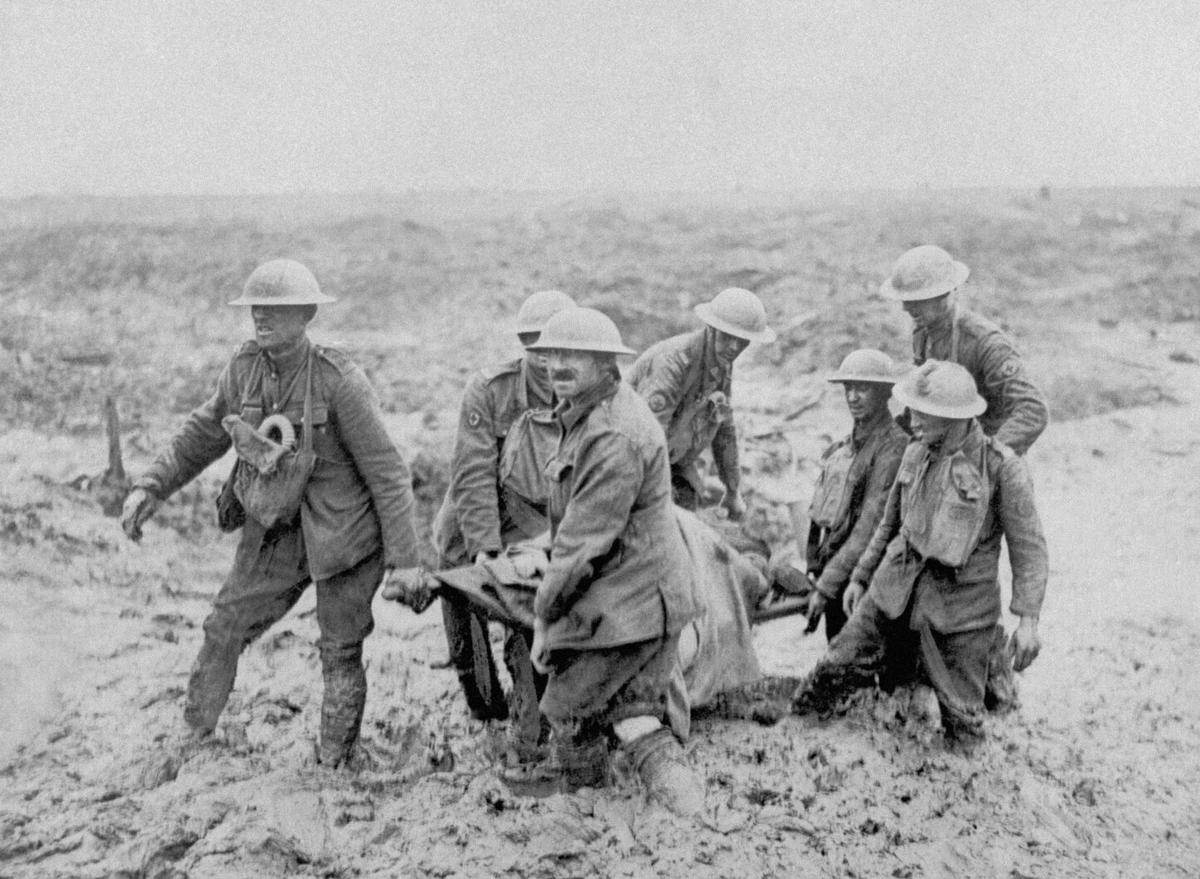 Canadian soldiers carry a stretcher through the mud near Boesinghe, Belgium, in 1917. 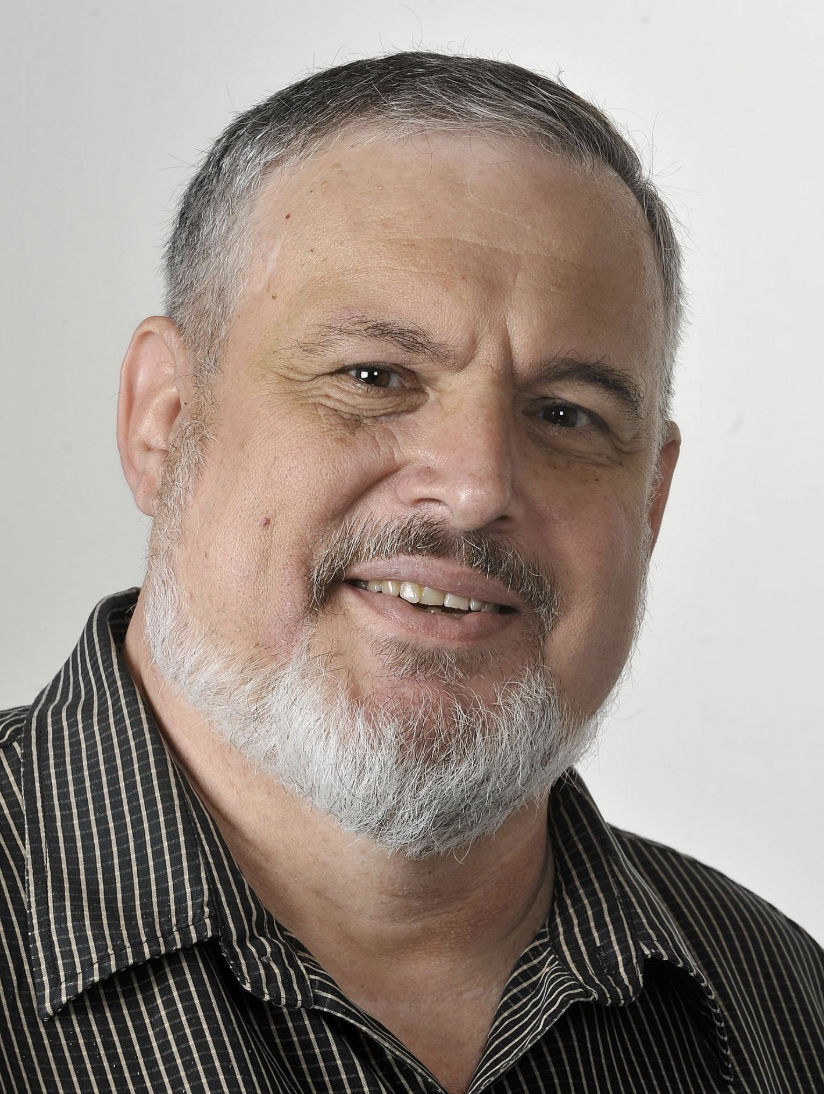 There are competing schools of thought as to the inspiration for J.R.R. Tolkien’s visions of Mordor in his epic fantasy trilogy, The Lord of the Rings.

Some say it was the steelworks and blast furnaces of the industrialized West Midlands in England. But many others — including myself — believe Tolkien’s memories of his British Army service in the horrific World War I battle of the Somme were the real catalyst.

The British suffered 57,000 casualties on the first day of the battle alone. The campaign would claim the lives of almost 1.5 million Allied soldiers, including two of Tolkien's closest friends and another shortly afterward.

Several passages in the novels evoke echoes of the blasted moonscapes of northern France — the muddy trenches, the widespread pestilence, the barbed wire, the deadly clouds of poisonous gas, the enemy siege works, and death and destruction on an unimaginable scale.

For example, as Frodo and Sam cross the Dead Marshes in The Two Towers, they see the faces of the dead below the water. “Grim faces and evil, and noble faces and sad. Many faces proud and fair, and weeds in their silver hair. But all foul, all rotting, all dead.”

Today marks the 103rd anniversary of the Armistice ending the war.

I originally wrote most of this column in 2018, for the centenary observances, but the sentiments bear repeating. Memories of one of the most cataclysmic events in world history have mostly faded from the public consciousness, as the generation who fought in it has passed. It is left to their descendants to preserve the accounts of their sacrifices.

The names of 39 soldiers from Missoula County who died in World War I are enshrined on a plaque on the "Over the Top to Victory" Doughboy statue on the county courthouse lawn.

"They're not just nobodies on a wall," said Hayes Otoupalik of Missoula on the 100th anniversary of the first Armistice Day. "They were human, flesh and blood. They were part of the memories of our lives and who we are, and it's important to learn about their history and remember them."

Those words still resonate. Missoulians will gather at the Doughboy Statue to pay their respects at 11 a.m. today. Retired Air Force General Dale Stovall will speak. Gov. Greg Gianforte is expected to appear, and Montana's congressional delegation will send representatives to read letters honoring everyone who has served in the military, according to organizer Susan Campbell Reneau. Participating organizations will include American Legion Post 27 Color Guard, Veterans of Foreign Wars Post 209 Honor Guard, and the Knights of Columbus Patriotic Order.

The war killed 14 million people over four years, including 9 million soldiers, sailors and airmen from 28 countries, according to the Associated Press. Almost 11,000 died on the final morning, many in the final minutes.

As a young lieutenant serving in the Army’s 1st Infantry Division, I had the opportunity in the 1980s to tour several of the battlefields in France on which American soldiers fought — Cantigny, Soissons, St. Mihiel and the Meuse-Argonne.

At first, it’s hard to imagine the scenes recounted in diaries and official unit histories, and depicted in grainy black-and-white photos from that era. The Argonne countryside is a verdant and idyllic place today, with lush farms, lakes, thick forests and picturesque villages.

Then, driving through the region, the reminders appear. The vast cemeteries full of crosses. The mass graves marked by towering monuments. The overgrown outlines of trenchworks and machine-gun emplacements.

The 1918 Meuse-Argonne offensive, which ended the war, involved 1.2 million American troops and was a particularly brutal affair, even by the standards of the day. The majority of the Missoula County casualties occurred during that time. Fresh, inexperienced, eager soldiers were thrown headlong into frontal assaults against machine guns manned by seasoned German troops in densely wooded terrain. Much of the combat devolved into hand-to-hand fighting with pistols, bayonets and knives.

I thought to myself at the time how fortunate my grandfather was to have served on a Navy ship during the war, not on the front lines in that hellish fray.

The most haunting memory of the trip is of the “Trench of the Bayonets” near Verdun. In 1916, a company of the French 137th Regiment defending Fort Douaumont was annihilated almost to the last man when a German artillery barrage collapsed the walls of their earthworks.

They were found with a neat line of bayonets sticking out of the ground, still attached to their rifles. The site has been preserved nearly intact.

Tolkien, a young Oxford academic, was 24 when he arrived at the Somme that same year. He began writing the first drafts of his mythology about Middle-earth, as he recalled, “by candle light in bell-tents, even some down in dugouts under shell fire,” according to Joseph Loconte, an associate professor of history at King’s College in New York.

“When Frodo returns to the Shire, his quest at an end, he resembles not so much the conquering hero as a shellshocked veteran,” Loconte wrote in the New York Times in 2016. “Here is a war story, wrapped in fantasy, that delivers painful truths about the human predicament.

“Tolkien used the language of myth not to escape the world, but to reveal a mythic and heroic quality in the world as we find it,” he added. “Perhaps this was the greatest tribute he could pay to the fallen of the Somme.”

Jim Van Nostrand is executive editor of the Missoulian. Reach him at jimvan@missoulian.com.

There was the lovely, dominant win by the Griz over the Cats, of course. And Sentinel, Hamilton, Florence and Thompson Falls won state titles, all in convincing fashion.

Joyful huckleberries to the news that the Centers for Disease Control and Prevention has approved COVID vaccines for children ages 5 to 11.

Now that the smoke has cleared from last week’s municipal election in Missoula, it’s time to think about where we go from here.

Intolerant chokecherries to state Sen. Theresa Manzella, R-Hamilton, for her recent remarks at a meeting in Clinton disparaging members of the…

Championship huckleberries to the University of Montana women’s soccer team, for winning the Big Sky tournament title earlier this month in Gr…

No, the Attorney General of this state does not get to use the Montana Highway Patrol as his private police force, "investigating" nonexistent…

A U.S Army 37mm gun crew mans its position during the Meuse-Argonne offensive in France.

Men in World War I military uniforms pose in the Meuse-Argonne cemetery, northeastern France, during a remembrance ceremony in 2018.

American troops with fixed bayonets climb over a sandbag revetment in France in 1918.

Canadian soldiers carry a stretcher through the mud near Boesinghe, Belgium, in 1917.