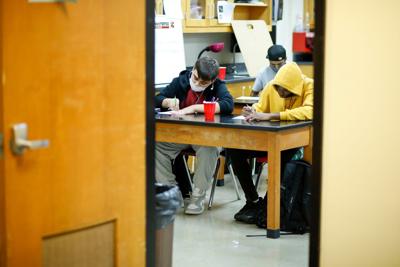 Buried near the bottom of the Madison School District’s lengthy and jargon-filled behavior policy is a single sentence that apparently applies to cellphones: “Use of any non-educationally required device, electronic or otherwise, that detracts from and/or disrupts learning of oneself, or others, is prohibited.”

If that refers to texting on phones in class, the policy is not being enforced much — if at all — in the city’s high schools. And some teachers don’t seem to know it exists, or they fear they can’t enforce it.

That needs to change with the start of classes this fall.

Cellphones in Madison’s schools are “such a major distraction for students and staff,” Madison School Board member Laura Simkin said Wednesday. Elected in April, Simkin is wisely calling for clear standards and real enforcement. Other board members and Superintendent Carlton Jenkins should support this important priority.

Cellphones are a “total distraction” and lead to planned altercations in halls and drug deals in bathrooms, according to former Madison School Board President Barbara Arnold and former member Marj Passman.

Compare Madison’s vague policy with Milwaukee Public Schools’ definitive rule: “Students are prohibited from activating, using or displaying electronic communication devices such as cellphones ... while on school premises.” If a student’s phone is visible in class, it “will be confiscated, inventoried and stored in a secure location until the school administration holds a conference with the parent or adult student.”

Madison students already have Chromebooks to complete classroom assignments, research information and calculate data. They don’t need to text their friends, watch videos or be glued to social media gossip when they’re supposed to be reading, crunching numbers or learning about American democracy.

Some Madison schools are trying to address this chronic problem. La Follette High School, for example, recently informed parents it is creating and will implement a “universal cellphone plan” for fall.

Parents may need to communicate with students about rides, activities and unexpected events before, between and after classes. But once the bell rings for lessons to begin, the phones need to vanish.

Any new policy needs emphatic and clear language so students understand and respect sensible limits. For starters, the Madison School District policy should actually include the word “cellphone.” The district should make sure teachers are empowered to take phones away if they see them in class. Only expressly permitted use of cellphones by school staff on rare occasions and for limited periods should be allowed.

For example, if a student’s Chromebook crashes, maybe they can have special permission to complete a lesson or two using their phone.

But even that seems generous and ripe for abuse. Many teens spend more than eight hours a day on their phones, according to Our Common Sense Census, sponsored in part by the Carnegie Corporation. Too much screen time can exacerbate anxiety and depression. The isolating pandemic only made this problem worse.

The message to students this fall should be consistent and backed by consequences: Put your phone away or your teacher will confiscate it.

The views expressed in the editorials are shaped by the board, independent of news coverage decisions elsewhere in the newspaper.

A teachers dons a cellphone suit in the latest cartoon from Phil Hands.