As hunters brace for a 2020 field season in the middle of a COVID-19 pandemic, they’ve still got to deal with a more persistent wildlife disease problem: chronic wasting disease.

“It still isn’t going away,” Montana Fish, Wildlife & Parks Region 1 spokesman Dillon Tabish said. “Hunters have been really invested in helping us with this — they know what’s at stake. We don’t want these concerns to stop people from enjoying hunting season, though. It’s not as if there weren’t enough disease issues in the world now.”

Chronic wasting disease, or CWD, is a neurological disease contagious to deer, elk and moose. Infected animals show poor body condition, drooling, drooping heads and disoriented behavior. The disease is related to bovine spongiform encephalitis, or Mad Cow Disease, although CWD has not been shown to be transferable to humans like Mad Cow Disease. Nevertheless, FWP strongly recommends not eating meat from an animal infected with CWD.

The disease has been a growing concern to wildlife managers in Wyoming, North Dakota and South Dakota, as well as the Canadian provinces of Saskatchewan and Alberta. In many parts of the United States and Canada, CWD appears related to the presence of captive game farms.

In the past two years Montana authorities detected an alarming rise in CWD-infected mule deer. The first outbreaks occurred in south-central Montana near the Wyoming border. That prompted more extensive testing which found the disease in northeastern Montana along the Hi-Line near the Canadian border. Other cases then turned up in the Libby area of northwest Montana.

“The fact it jumped to northwest Montana, where there’s not neighboring states and provinces with infections, was a concern,” said Region 1 wildlife manager Neil Anderson. “It’s also concerning for north Idaho and British Columbia, which don’t have it yet. We’re trying to keep the spread to a minimum.”

That said, Montana officials have changed and simplified the regulations for sampling and tracing possibly infected animals for 2020. FWP has dropped its Transportation Management Zones, which prohibited hunters from moving deer carcasses outside priority surveillance areas. Tabish said the rapidly changing lists of new detections made it difficult to keep the public informed of the boundaries.

“The most important thing is proper disposal of the carcass,” Tabish said. “We can’t have people dumping carcasses out in the woods, which has been a long-time practice for some people. So this year, you can transport your animal, bring it back home, bone it out, get it processed — that carcass just needs to end up at a landfill.”

Carcasses can also be boned out and left at the kill site. FWP is recommending that the bones, hide and head of any animal butchered by hunters at home be dumped only at Class II landfills. A list of appropriate landfills can be found online.

CWD has shown the ability to leave infectious material in the dirt where a sick animal has died or been lying. Proper disposal, especially of the head and backbone, is essential to keep the disease from spreading to other herds. Hunters handling their animals in the field are advised to use gloves and eye protection, and to avoid contact with the brain and spinal tissue.

Anderson said hunters who like to make their own European mount trophy skulls should be especially careful. European mounts use insects to clean off the soft tissue, leaving bright skulls.

“If you’re just throwing it in the ant pile, you could potentially move those prions,” Anderson said, referring to the infectious particles. “If you have your own beetles, that’s fine, but their waste should go in a dumpster.”

Hunters are still asked to submit samples from their animals for testing, which FWP will pay to have processed. However, testing assistance won’t be available in most parts of the state until the general big game season starts on Oct. 24. So archers and those hunting in special early season districts can find sampling directions online at the FWP’s CWD web page, http://fwp.mt.gov/fishAndWildlife/diseasesAndResearch/diseases/chronicWastingDisease/management.html. Testing sites will be available at FWP regional headquarters in Kalispell, Missoula, Bozeman, Great Falls, Billings, Miles City and Glasgow, as well as remote sites in Libby, Thompson Falls, Olney, Ennis, Dillon, Butte, Havre, Hysham, Ashland/Broadus and Mosby/Flowing Wells.

Montana hunters are prohibited from using lures or scents derived from deer and elk glands as part of the effort to prevent the spread of CWD.

FWP will be posting testing technicians at many game check stations in priority surveillance areas to gather more samples. Hunters will be asked to voluntarily submit their animals for sampling. Anyone seeing a sick-looking deer, elk or moose is asked to report it to the local FWP office, and avoid handling it.

A Montana game farm is under quarantine after an elk tested positive for chronic wasting disease, the state Department of Livestock reported. 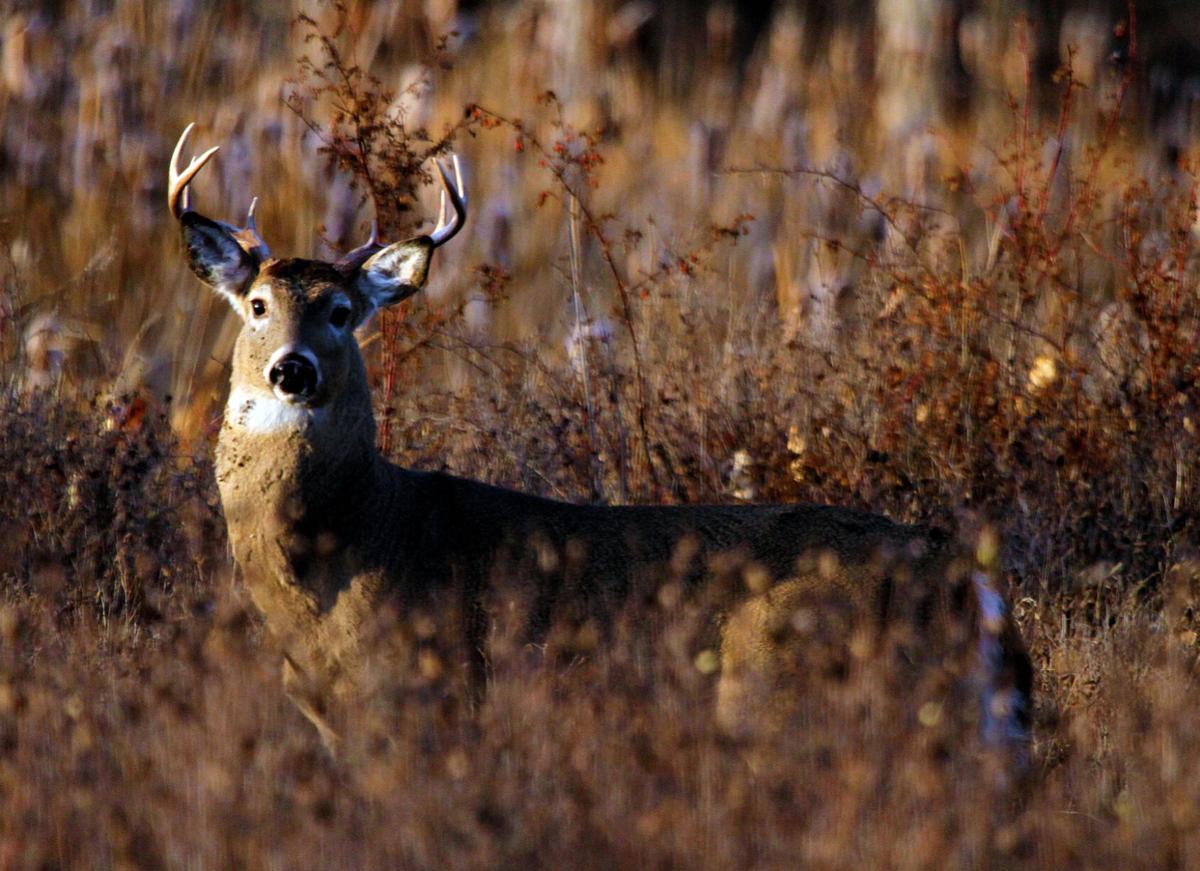 A whitetail buck alerts to intruders as hunting season nears in western Montana. 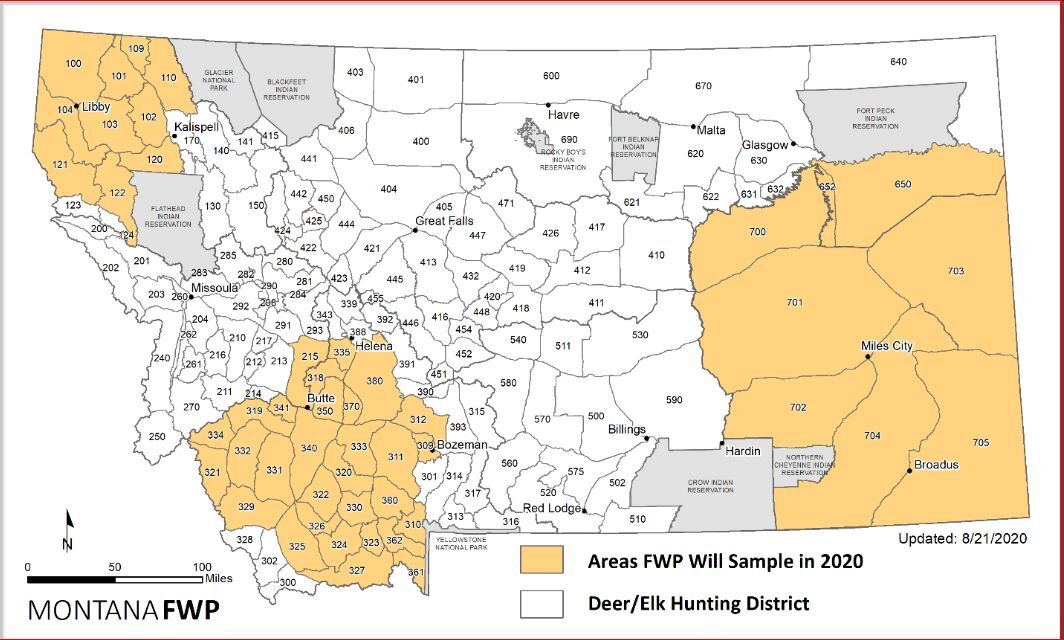 Montana Fish, Wildlife & Parks has three priority surveillance areas where biologists will be sampling for chronic wasting disease in deer, elk and moose. The infectious disease can rapidly wipe out game populations if allowed to spread. Hunters are asked to carefully dispose of carcasses in a landfill to prevent spread of the disease. 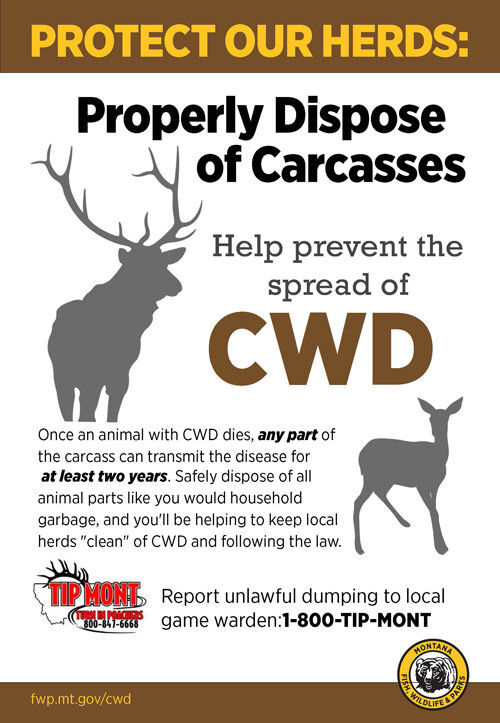 FWP is reminding hunters to properly dispose of their deer, elk or moose carcass this fall.