The Bureau of Land Management is proposing to acquire more than 11,000 acres south and east of the Charles M. Russell National Wildlife Refuge, a portion of which is along a five-mile stretch of the lower Musselshell River.

In an environmental assessment the agency released on Monday, the proposed acquisition would consolidate 39,130 acres of its land along the border of Petroleum and Garfield counties that abuts the refuge. In the process, the acquisition would provide access to 8,040 acres of BLM land and 1,320 acres of State Trust lands now inaccessible to the public, according to the EA.

Public comment is being sought on the proposal. If the decision is made to acquire the land, Lepisto said the timeframe for finalizing the deal could be early to midsummer.

The land is owned by Craig and Barbara Egeland, of Rhame, North Dakota, as well as the 73 Ranch & Hunt Club, which lists the same address as the Egelands. The husband and wife are also listed as members of the North Dakota Elk Growers, a nonprofit founded “to promote and protect the elk farming and ranching industry.”

Nearly 32,000 acres of the 73 Ranch — only 12,000 of which was deeded — was previously listed for sale for $5 million. The advertisement lists the ranch as well-known for its trophy elk, whitetail, mule deer, antelope, abundant upland birds, wild turkeys and some waterfowl.

The BLM is conducting an appraisal to determine the price it can legally pay for the land, according to one of the agency’s staff. The price will be based on fair market value.

If approved, money for the purchase would come from the federal Land and Water Conservation Fund.

The Rocky Mountain Elk Foundation, based in Missoula, has stepped in to facilitate the land deal. Michael Mueller, senior lands program manager for RMEF, called the proposal an important project.

"This is a state and national priority for the Rocky Mountain Elk Foundation" because of its tremendous wildlife habitat and fishery, he said.

"We are asking for support to get it across the finish line," Mueller added.

The BLM's Lepisto said, “We are thrilled to be working with them on public access opportunities in this wildlife-rich region."

“Acquisition of the lands would facilitate a variety of public recreational activities including hunting, fishing, boating, camping, hiking and wildlife viewing on additional public and state lands that were historically inaccessible to the public,” the BLM’s environmental assessment stated. 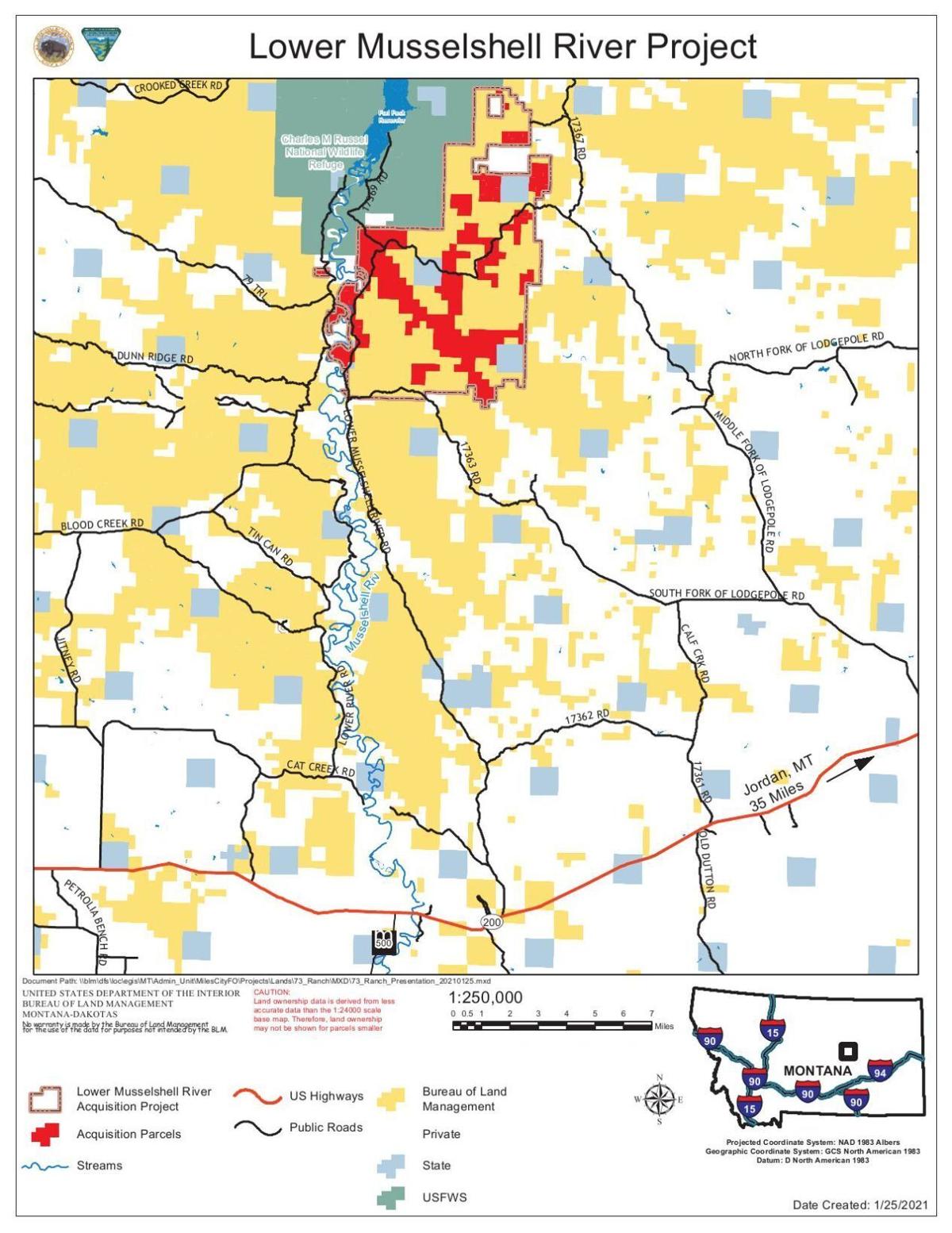 The land purchase would also make about 77 miles of existing roads and trails in the area accessible to the public.

In addition to this deal, the EA noted the “U.S. Fish and Wildlife Service is pursuing an acquisition of approximately 756 acres (290 acres in Petroleum County, 466 acres in Garfield County) of privately owned land along the Musselshell River within the current CMR Refuge boundary.” These are adjacent lands also owned by the Egelands, according to Paul Santavy, project leader of the refuge.

"If it all goes through it will be a real boon for people who like public land and want to get out," Santavy said. "It will block together a huge chunk of public land."

If approved, the BLM portion of the land purchase would cut taxes to Garfield County by almost $6,800, and $420 to Petroleum County. BLM, along with other federal landowners, provide Payment In Lieu of Taxes — also known as PILT funding — to counties where it owns land.

Despite the relatively small loss of funding, Petroleum County Commissioners sent a letter to the BLM stating its opposition to the proposal while the Garfield County Commission endorsed the project, according to the EA.

As an alternative, the Petroleum County Commission suggested BLM consider “the possibility of a similar number of acres of public land be designated for disposal and offered to landowners to prevent a net loss of deeded acres in Petroleum County, thereby resulting in a no net loss of tax revenue in the county,” according to the EA.

The BLM rejected the suggestion because “willing landowners are necessary for land exchanges to occur” and none had stepped forward.

For more information on the BLM’s proposal, to read the EA, or to provide comments, go to the dedicated BLM e-Planning website at: https://eplanning.blm.gov. Search using the Project’s NEPA number: DOI-BLM-MT-C020-2021-0057-EA.

A Montana state report made public this week showed that grizzly bear deaths in parts of Yellowstone National Park increased last year and were higher than the 10-year average, wildlife officials said.

Work that began last fall to upgrade the North Entrance station and road to Yellowstone National Park at Gardiner will continue through this summer and is projected to be completed by fall.

Fewer bison migrated out of Yellowstone National Park this winter, reducing the hunter harvest to almost 170 animals, according to numbers compiled by Montana Fish, Wildlife & Parks.

Federally designated wilderness study areas are by design quiet, peaceful places where motorized travel is limited. They were also designed to be temporary — studied by the Bureau of Land Management or U.S. Forest Service and made by the U.S. Congress into big W wilderness or released as multiple-use lands.

The lawsuit claims the Montana Department of Environmental Quality erred in not consulting with the Gros Ventre and Assiniboine Tribes regarding the work.

Volcanoes in Iceland, Italy and Guatemala have put on displays that are captivating audiences worldwide. But did you know that the same sort of activity could also occur in the southwestern United States?

Some new walleye limits in place for Helena-area waters

The Montana Fish and Wildlife Commission on Thursday adopted new regulations for walleye on Canyon Ferry and Hauser reservoirs as well as a section of the Missouri River.

There have been five new fish records in Montana in less than a year.

Gianforte gets warning in killing of Yellowstone wolf