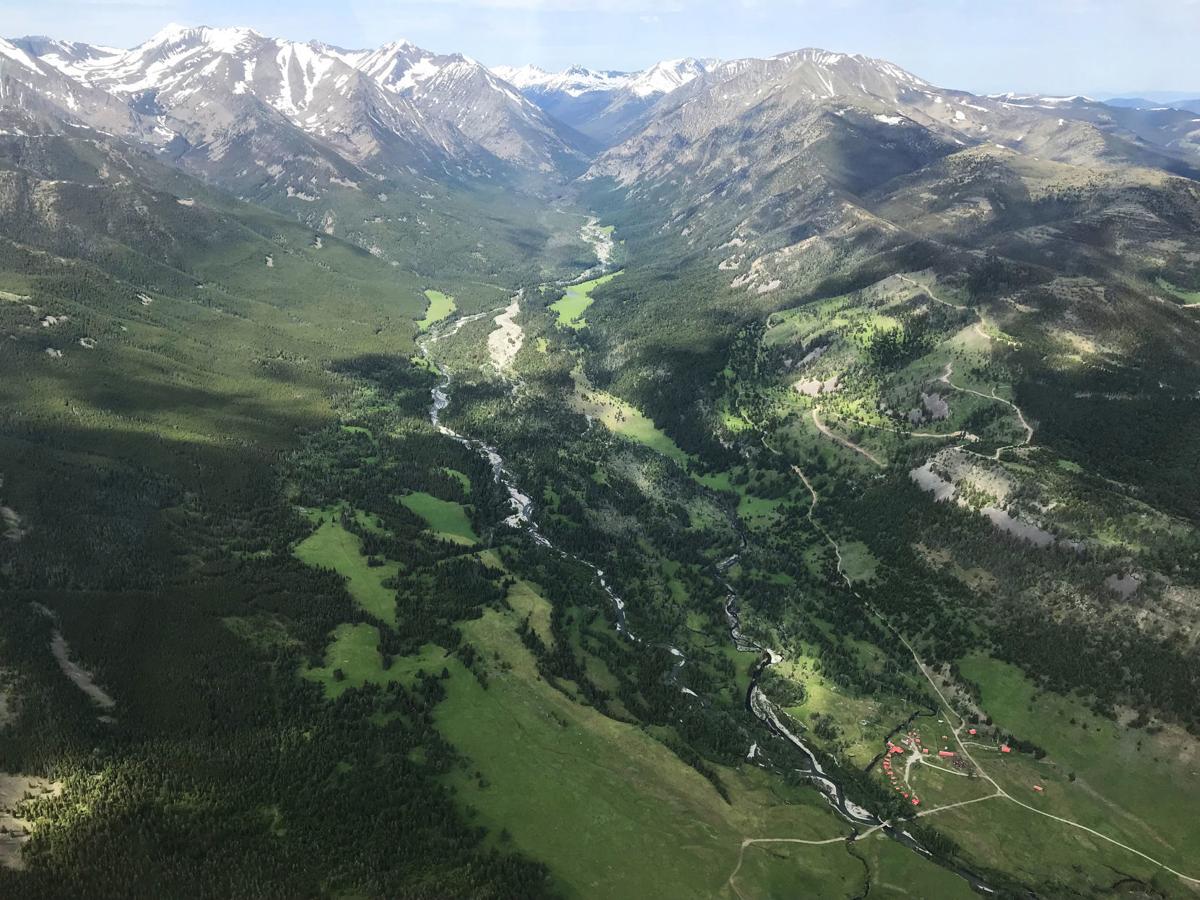 Sweet Grass Creek on the west side of the Crazy Mountains has contested public access. The range is a patchwork of federal and private lands, unlike most mountain ranges in the state. 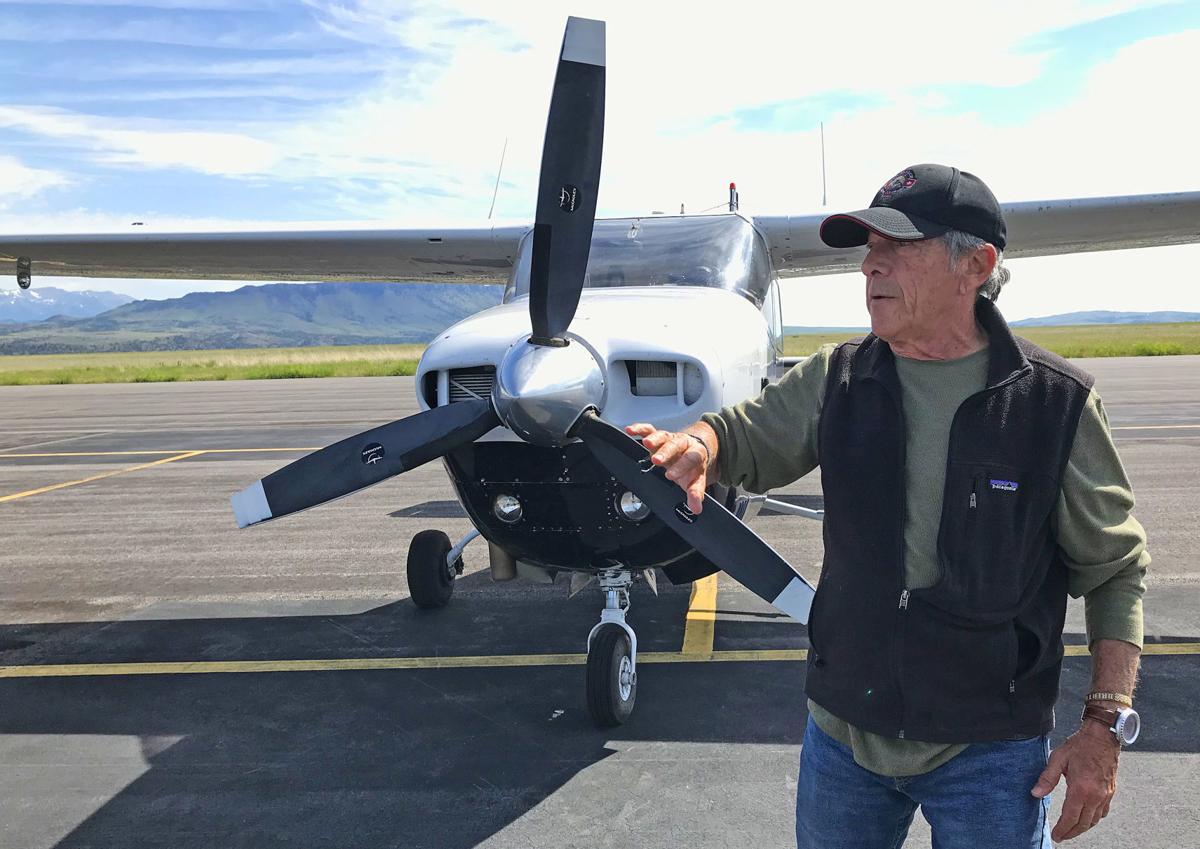 Bruce Gordon — founder, fundraiser and chief bottle washer for EcoFlight — talks in front of his Cessna 210 at the Mission Field Airport north of Livingston on Thursday. 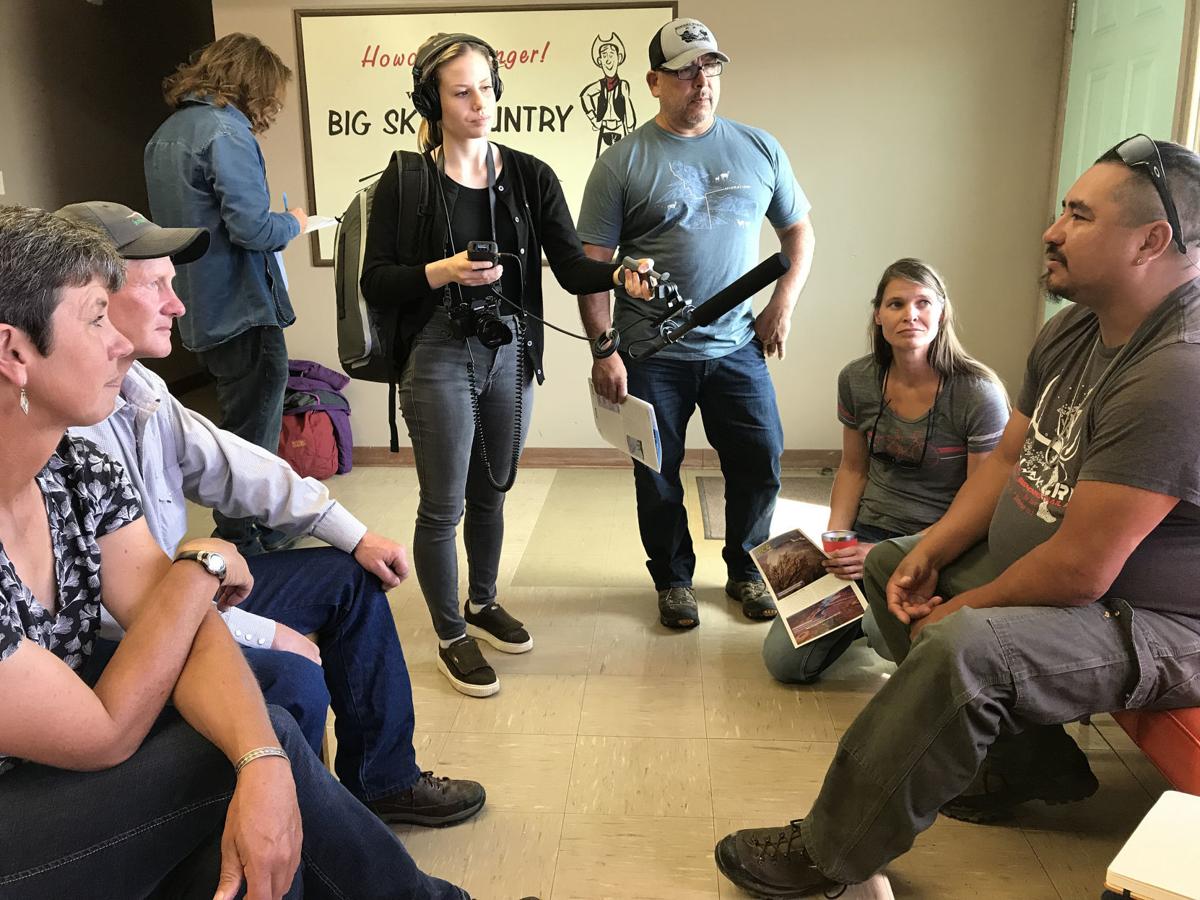 LIVINGSTON — From an elevation of 9,500 feet in Bruce Gordon’s tiny Cessna, the jagged crags of the Crazy Mountains appear calm and peaceful just beyond the end of the airplane’s wingtip.

On the ground, however, a variety of people disagree over how the island range in southwestern Montana should be managed, creating a turbulence that has caused tumult even between groups that often join forces.

Gordon, the Colorado-based founder of EcoFlight, may have the most objective view of the mountains since he had just been introduced to them on a sunny Thursday morning in June.

“Here, you have a chance” to set the agenda, he said after landing. In contrast, in his home state the public's access to wildlands has been cut off or compromised by land development.

“There’s a way, maybe, you can save this place,” Gordon added.

To accomplish that, he warned, the changes may need to be drastic.

The Crazy Mountains are known to Crow Indians like Adrian Bird Jr. as the Snow-Capped or Ominous mountains, translated as Awaxaawippiia. His ancestors, like Sore Belly and Plenty Coups, climbed the highest rock-clad peaks in moccasins to get as close to the Creator as possible. From such lofty points they fasted to seek visions, “to get that answer, to get those god-given strengths," he said.

“They weren’t crazy, they were determined. They didn’t go up there to feel fear, they went up there for an answer in life.”

Bird Jr. hasn’t ever hiked into the range, which can be difficult for the public to access because of checkerboard land ownership and limited access points. But seeing the peaks from the air for the first time ignited stories handed down by generations of his people about the area, its campsites, and his tribe’s names for places like the Yellowstone River — Elk River to the Crow.

“That’s not just a pile of rocks to us,” he said of the Crazies. “We don’t use that word much anymore — sacred. But that’s why we’re trying to keep it preserved. We always ask: ‘How much more is going to be taken from us?’”

Ted Brewer, of the Montana Wilderness Association, organized the flight for Bird and a few other tribal members, locals, and the media through EcoFlight. His group is working to ensure that tribal voices like Bird’s are heard by the Custer Gallatin National Forest as it develops a new management plan for the Crazies and its other lands.

“So we’re providing a platform,” Brewer said. “I think their voice has probably not been heard in the past, so it’s important the Forest Service recognizes that.”

While Brewer and MWA are urging the agency to collaborate with the Crow, as well as other tribes and local coalitions, some groups have chosen to take the Forest Service to court in an attempt to make their demands heard on another front. Earlier this month, several groups joined forces to sue the Forest Service saying the agency was abandoning its rightful claim to four established and historic trails in the Crazy Mountains in favor of closed-door negotiations leading to compromises with landowners in the area.

One of those landowners, Ned Zimmerman, whose property abuts the Crazies on the west side in the Shields Valley, said in the last two years of negotiations the landowners and Forest Service have made more progress than they did in the previous 20 years of talks that were more adversarial.

Zimmerman recently signed an easement for the Forest Service as it works to construct a new trail on the west side. Moving dirt on the Porcupine Lowline Trail could start this summer, much to the disappointment of the groups who sued. Those groups include: Friends of the Crazy Mountains, the Montana Chapter of Backcountry Hunters & Anglers, Enhancing Montana's Wildlife & Habitat, and the Skyline Sportsmen Association.

“The goal is to come up with a real trail that people can follow,” Zimmerman said.

“It’s a pretty simple solution, but it took a lot for the Zimmerman family to come forward with that,” said Erica Lighthiser, of the Park County Environmental Council.

“And this results in a long-term solution,” said Eric Hull, of the Rocky Mountain Elk Foundation.

Detractors say the new trail will be steeper, and therefore less accessible, while also absolving Zimmerman of any wrongdoing over years of what they claim were illegal postings of “closed” signs on a legally accessible public trail.

Zimmerman sees the new trail as a way to provide public access while also protecting his property rights. The old trail wanders on and off what is now the forest and onto his property in some areas. That was no big deal in the early 1900s when few traveled the route and everyone knew each other, but that’s not the case now as more recreationists press into the region attracted by the area's mountains, trails and streams.

“With the increasing population, it’s not a big enough landscape,” Zimmerman said. “Physically, people cannot do everything that they want to do.”

He also stressed that having a sustainable agricultural community around the Crazies “helps protect the public land behind it as well. One old rancher told me, ‘The last crop that gets planted when a landowner leaves is a subdivision.’”

Although the public may not have been involved in the discussions to outline the agreement, Zimmerman said there was no better way to build trust with landowners. Conversations would not be candid with too many people in the room, he added, especially if one party is threatening to sue.

“And every time we did something it was put out to the public,” he said.

Although Custer Gallatin National Forest officials have notified the public of its plans, the agency also said no environmental review of the project was needed for the new trail, a process that would have incorporated public comments.

Shane Doyle, a Crow tribal member who works with the American Indian Institute in Bozeman, said his people also want to have access to the Crazy Mountains to collect native plants, to harvest tepee poles, and to fast and pray as their ancestors had done for hundreds of years prior to Euro-Americans' arrival.

“At the same time our priority is to protect the mountains so they stay as wild and natural as they can be,” he added. “There’s a balance there.

“We want the mountains protected in a way that gives landowners freedom, but in a way so that they respect what they’ve inherited.

“I hate to see the mountains locked up because people want to keep other people off their property,” Doyle added.

As he flies over the Yellowstone (Elk) River, Doyle noted landmarks important in his tribe’s history: Fort Parker, the first headquarters for the Crow Reservation in 1869; Hide Scraper Mountain, now called Sheep Mountain, a steep butte west of the river; and farther to the west along the Shields (Yellow) River, the resting place of the 12,600-year-old Anzick child, the young boy's burial with 100 stone and bone artifacts uncovered accidentally by construction workers in the 1960s.

From the top of 11,214-foot high Crazy Peak, Doyle’s ancestor Plenty Coups fasted at age 11 seeking a vision, he recounted. When no vision came to Plenty Coups after three days and nights, he cut off the tip of his index finger on his left hand as an offering. He was so dehydrated the wound didn’t bleed, Doyle said.

The vision that finally came to Plenty Coups foretold of the Bozeman Trail bringing white settlers to the region along with their numerous cattle displacing once-plentiful bison.

After passing over the mountains for the second time that day, Doyle said quietly of the Crazy Mountains: “The ultimate cathedral.”

What recreationists need to know about COVID-19-related change at Montana's public land-management agencies.

"We’re hoping this thing will take its toll, we’ll get through it and get back on the water.”

What recreationists need to know about COVID-19-related change at Montana's public land-management agencies.

Yellowstone Caldera Chronicles is a weekly column written by scientists and collaborators of the Yellowstone Volcano Observatory. This week's contribution is from Dakota Churchill, physical scientist with the U.S. Geological Survey.

Outdoor recreation is exempt from Montana's stay-home order, but don't go too far

Gov. Steve Bullock’s stay-at-home order included multiple exemptions for essential services such as purchasing food or visiting the doctor. But it also provides a notable exemption for outdoor recreation while practicing social distancing.

Outdoor recreation is exempt from Montana's stay-home order, but don't go too far

Gov. Steve Bullock’s stay-at-home order included multiple exemptions for essential services such as purchasing food or visiting the doctor. But it also provides a notable exemption for outdoor recreation while practicing social distancing.

Sweet Grass Creek on the west side of the Crazy Mountains has contested public access. The range is a patchwork of federal and private lands, unlike most mountain ranges in the state.

Bruce Gordon — founder, fundraiser and chief bottle washer for EcoFlight — talks in front of his Cessna 210 at the Mission Field Airport north of Livingston on Thursday.