Become a Member
Read Today's E-edition
Share This
Did it work? Yellowstone to Yukon researchers find novel ways to measure success
0 Comments
Share this
1 of 3 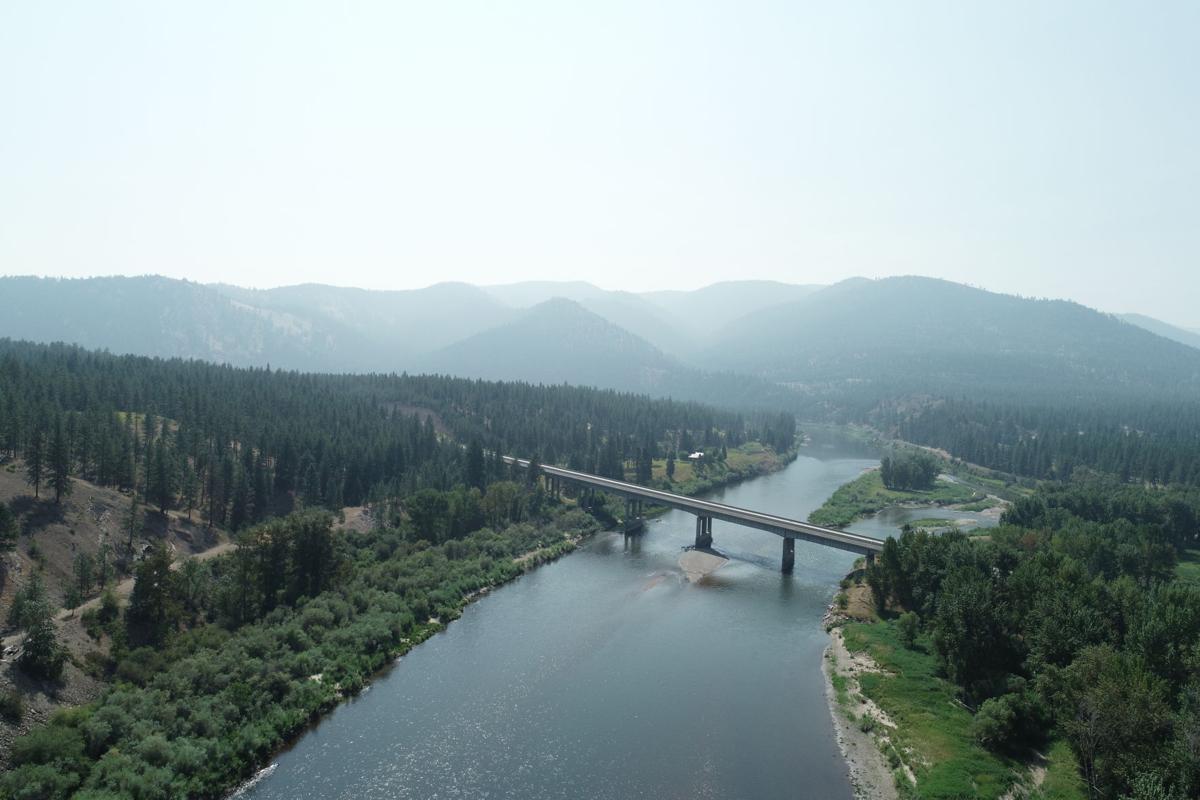 Interstate 90 forms an almost impenetrable barrier to grizzly bears and other wildilfe trying to travel through wilderness areas in western Montana. A Vital Ground-brokered conservation easement alongside this freeway bridge near Ninemile protected a small parcel from development, which has allowed grizzly bears to pass from the Flathead Indian Reservation to the Bitterroot Mountains. 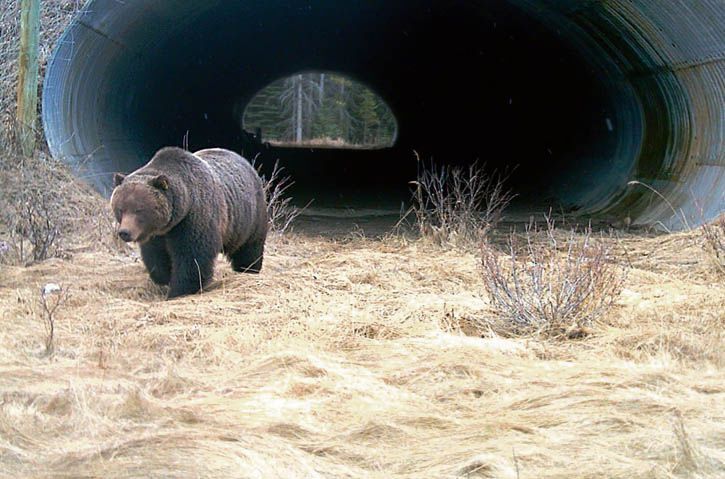 A grizzly bear emerges from a wildlife underpass in Banff National Park. The Trans-Canada Highway is one of the globe's most successful wildlife crossing networks. In the United States, Congress just approved $350 million for similar structures. 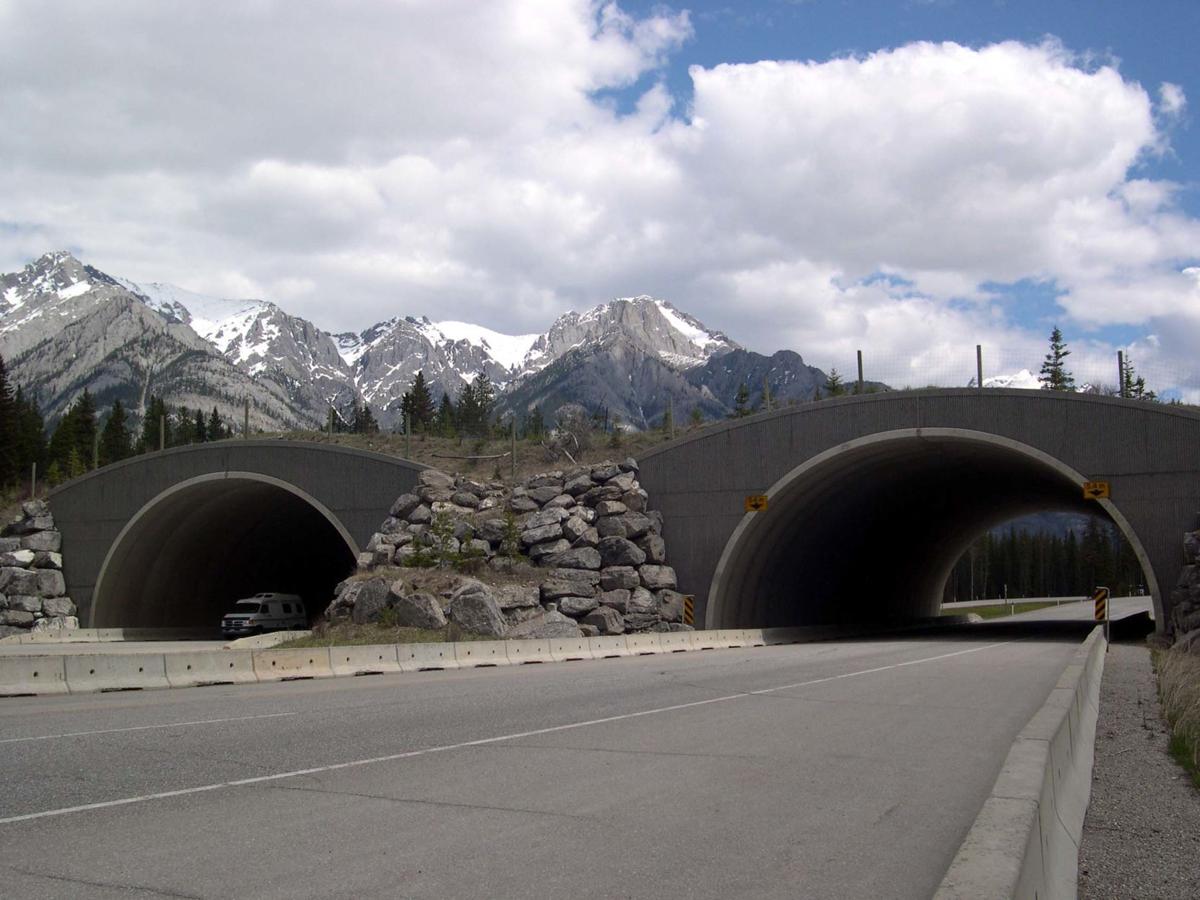 Wildlife overpasses like this one in Banff National Park allow animals to connect protected habitat without putting motorists at risk. The crossings usually pay for themselves over several years in reduced auto collisions.

It’s one thing to mount a decades-long conservation campaign on a continental scale like the Yellowstone to Yukon, or Y2Y.

It’s another to prove anything about it worked. When you look at a place as big as Argentina but you don’t have gross domestic product or number of high school graduates to use as statistics, what do you measure to declare success?

A team of U.S. and Canadian researchers tackled that question for the Y2Y in a new paper published this month in the Journal of Conservation Science and Practice. Led by University of Montana wildlife biologist Mark Hebblewhite, they verified progress toward saving one of the world’s most biodiverse places through highway projects, television screenplays and grizzly bear home ranges.

“Just adding more protected areas doesn’t tell us what we need to know,” Hebblewhite said. “It doesn’t tell us how it translates into biodiversity outcomes. It’s hard to evaluate conservation and say ‘this action did that.’”

In a landscape as big as Yellowstone to Yukon, sheer scale can bedazzle. As first outlined in 1993, the Y2Y boundary stretched from the Alaska border by Fairbanks south along the Rocky Mountains through Jasper and Banff national parks in Alberta, past Glacier and Yellowstone national parks in Montana, ending around Idaho’s Boulder-White Clouds and Wyoming’s Wind River Range wilderness areas.

The study created five different measuring sticks to gauge success. The most basic looked at how many acres got conserved within the Y2Y region since its campaign started compared to surrounding public lands and the U.S. and Canadian nations as a whole.

It found the rate of conservation within Y2Y increased 90% since the project started in 1993, while surrounding areas stayed flat or even declined. Protected areas like national parks and wilderness areas expanded from 9.7% in 1993 to 17.6% in 2018.

The rate of protected land growth before and after that 1993 date also showed evidence the campaign wasn’t simply the continuation of a trend that had momentum before public efforts got started. In the previous quarter-century, the area added an average 2,598 square kilometers of protection a year. In the next 25 years during the Y2Y campaign, that figure nearly doubled to 4,962 square kilometers a year on average.

That showed up in projects like the Rocky Mountain Front wilderness additions in Montana and several new national parks in Canada’s Yukon Territory, British Columbia and Alberta.

The next measuring stick looked at similar progress on private lands. There, initiatives like the Transborder Grizzly Bear Project directed strategic purchases of habitat on both sides of the U.S.-Canadian border, along Canadian Highway 3 and U.S. Highway 2. Y2Y was involved in raising $11 million to secure conservation easements on 28,000 acres of Stimson Lumber Co. forestlands surrounding the Yaak River confluence, and the Montana Legacy Project that conserved more than 300,000 acres of Plum Creek Timber Co. working lands.

Then the researchers tried looking at what occupants of those lands did. In particular, they tracked the populations of grizzly bears that depend on them. Not only are the bears closely monitored on both sides of the border, what improves quality of life for a grizzly bear has an umbrella effect on many other species further down the food chain.

They found occupied grizzly range more than doubled between 1990 and 2014, from 20,500 square miles to 46,144 square miles in the United States alone. One important corollary to that finding was the amount of unprotected or private land the bears began using. In the early part of the Y2Y campaign, grizzlies depended on protected lands like national parks for 70% of their habitat. Today, the share of non-protected and private lands makes up almost half of grizzly range.

“As grizzlies expand beyond Glacier and Yellowstone national parks, their future fate plays out on large private lands,” Hebblewhite said. That led to the next measuring stick – projects to connect fragmented hunks of habitat.

The study found that wildlife crossing structures proliferated throughout the Y2Y in ways that inspired other parts of the world. With 107 over- and underpasses such as the Animal’s Bridge near Evaro in Montana and the 80-kilometer stretch of overpasses and tunnels penetrating the Trans-Canada Highway by Banff National Park, the study authors could claim that “Y2Y has become a global model for green infrastructure to reduce fragmentation and foster connectivity.”

Such projects often involve relatively tiny acquisitions or changes, according to Vital Ground Executive Director Ryan Lutey. The Missoula-based land trust has collaborated on grizzly-related preservation efforts throughout the Y2Y. One of its most recent and successful deals involved a 240-acre conservation easement on land alongside Interstate 90 near Ninemile Creek.

“That parcel logically would never host a grizzly bear or wolf long-term,” Lutey said. “But it allows a grizzly to slip under the highway with a lot more safety and less potential to have a traffic collision.”

The validity of that idea got confirmed this fall with the passage of the Infrastructure Investment and Jobs Act. It contains $350 million for wildlife crossing structures and improvements. Those aren’t just so critters can cross the road.

Perhaps the most unusual measuring stick was a marketing review. The study team used a method called “counterfactual analysis” to compare changes in the Y2Y zone with similar areas that didn’t have active publicity and attention-getting activity. It’s similar to what advertisers do comparing how a cereal brand does in one community where it’s supported by lots of commercials with another place that doesn’t have the publicity.

“We looked at the rate of change and expansion of protected areas in the Y2Y 25 years ago, and it accelerated – there was an 80% increase,” Hebblewhite said. “Then we looked at other regions in Alberta, British Columbia and Montana. Conservation declined. We also looked on the scale of the whole continent. All of North America was flat-lining while conservation was increasing in the Y2Y.”

Part of what the researchers looked at to gauge public interest was the amount of Y2Y messaging that wound up in popular culture. Magazine cover stories, television documentaries, even episodes of the TV series Gray’s Anatomy and West Wing provide evidence the campaign has reached a wide audience.

“That’s how you get conservation done,” Hebblewhite said. “You change people’s attitudes. This work has global implications. Yes it takes 25 years, but this shows you can get somewhere.”

Two of the largest grizzly bear habitats in the nation picked up a crucial 20-acre addition that may help those bears get around people’s homesites.

Both public access and timber work will remain on 27,289 acres of forest near Libby through a new conservation easement with the Trust for Public Lands.

Motorists will need tickets for both the Going-to-the-Sun Road and Polebridge when visiting Glacier this summer.

Montana’s Fish and Game Commission unanimously endorsed the agreement to manage grizzly bear hunting around Yellowstone Park, should the state ever get oversight of the federally protected animal.

John Talbot, former publisher of the Missoulian, died on Thursday. He was 91.

In a western version of Winnie the Pooh’s Hundred Acre Wood, the Vital Ground Foundation has secured a 100-acre bit of forest near Whitefish for grizzly bear habitat.

The possibility of adding more commercial telecommunications to a place where many visitors come specifically to disconnect from the outside world concerns many people.

Interstate 90 forms an almost impenetrable barrier to grizzly bears and other wildilfe trying to travel through wilderness areas in western Montana. A Vital Ground-brokered conservation easement alongside this freeway bridge near Ninemile protected a small parcel from development, which has allowed grizzly bears to pass from the Flathead Indian Reservation to the Bitterroot Mountains.

A grizzly bear emerges from a wildlife underpass in Banff National Park. The Trans-Canada Highway is one of the globe's most successful wildlife crossing networks. In the United States, Congress just approved $350 million for similar structures.

Wildlife overpasses like this one in Banff National Park allow animals to connect protected habitat without putting motorists at risk. The crossings usually pay for themselves over several years in reduced auto collisions.