Alliance for the Wild Rockies and Native Ecosystems Council filed the suit in District Court in Missoula on Monday, the second suit they have filed against a project that dates back to 2012.

"It's unfortunate to have to take a federal agency to court a second time over this logging project, but federal agencies have to follow the law, just like the rest of us,” said Mike Garrity, executive director of the Alliance for the Wild Rockies, in a news release. 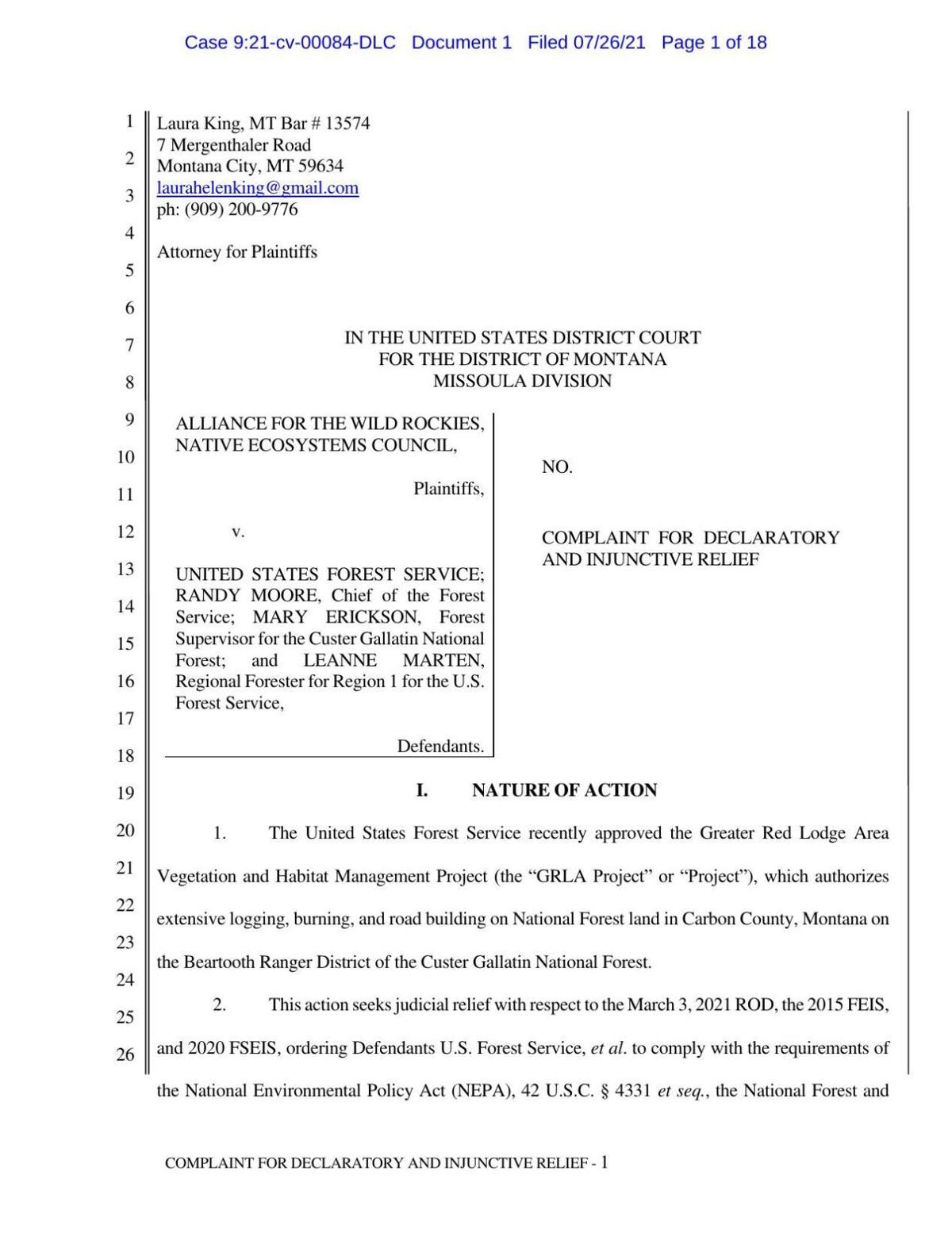 The lawsuit seeks to halt the project, which was scheduled to begin this spring in Red Lodge, Willow and Nichols creeks. The drainages are west of the resort community of Red Lodge along the northeast face of the Beartooth Mountains.

The previous lawsuit, filed in 2015, prompted the Forest Service to pull its decision and rework its analysis. That resulted in the announcement this March to move ahead with the project, conducting logging, prescribed burns and fuels reduction on portions of 22,000 acres.

The lawsuit comes as the Red Lodge community saw the 46-square-mile Robertson Draw fire, ignited on June 13 seven miles south of town, light the skyline and send clouds of smoke and ash into the community. The human-caused fire is 90% contained, but burned several structures and is expected to continue to smolder in inaccessible terrain on nearby Mount Maurice until snow falls or there is a season-ending rainfall.

In challenging the project, the groups claim the Forest Service identified its Wildland Urban Interface in an area with few homes or other structures in need of protection from wildfire. The agency defines a WUI as “an area within or adjacent to” a community near federal lands that are at “high risk from wildfire.”

The Forest Service is using the WUI as a way to avoid protecting Canada lynx habitat, as required by law, the lawsuit asserts.

“Instead, the Custer National Forest produced an internal document … that sets forth a new definition and mapping protocol for lynx habitat,” the lawsuit said. This new definition did not undergo proper analysis as required by law, the groups alleged, and also ignores the agency’s own definition of lynx habitat.

In its Final Supplemental Environmental Impact Statement, the Forest Service noted the adjoining state project but said it was outside of mapped lynx habitat and was relatively small in size relative to the size of lynx home ranges, so “no significant cumulative effects are expected.”

“At this point, the only way we can conserve the last best habitat for elk, grizzly bears, and lynx is to once again challenge the project in federal court,” he said.

Trekking into Black Canyon Lake in the Absaroka Beartooth Wilderness requires some rock scrambling and route finding. The reward is gorgeous views and cutthroat trout, if the wind doesn't blow you away.

The way Lane Bunner tells it, the wolf was chasing his Jack Russell terrier, had closed to within 40 yards or so, and he had to make a split-second decision.

I have archery hunted for five years, only to be saved by rifle season in my quest to fill the freezer with an elk annually.

Locating earthquakes in Yellowstone is a time-intensive process that requires the trained eye and extensive experience of a human analyst. But advances in computer algorithms, known as “machine learning” tools, hold promise for automatically locating earthquakes that might otherwise be overlooked, and the dawn of a new age in seismology.

Animals that dig underground are called fossorial. The word comes from the Latin word fossor, which means digger.

Much is known about how the chemical compositions of gases vary across the Yellowstone volcanic system, but how they vary in time has remained largely a mystery. Our understanding should greatly improve with a recent installation of a station that continuously monitors gases and communicates those data in real time.

Lower stretch of Middle Fork of the Flathead River a calm, scenic float

A short float down the lower Middle Fork of the Flathead River is incredibly scenic, but don’t expect privacy.