Steelhead and salmon make their way up the Snake River through the viewing window at Lower Granite Dam. 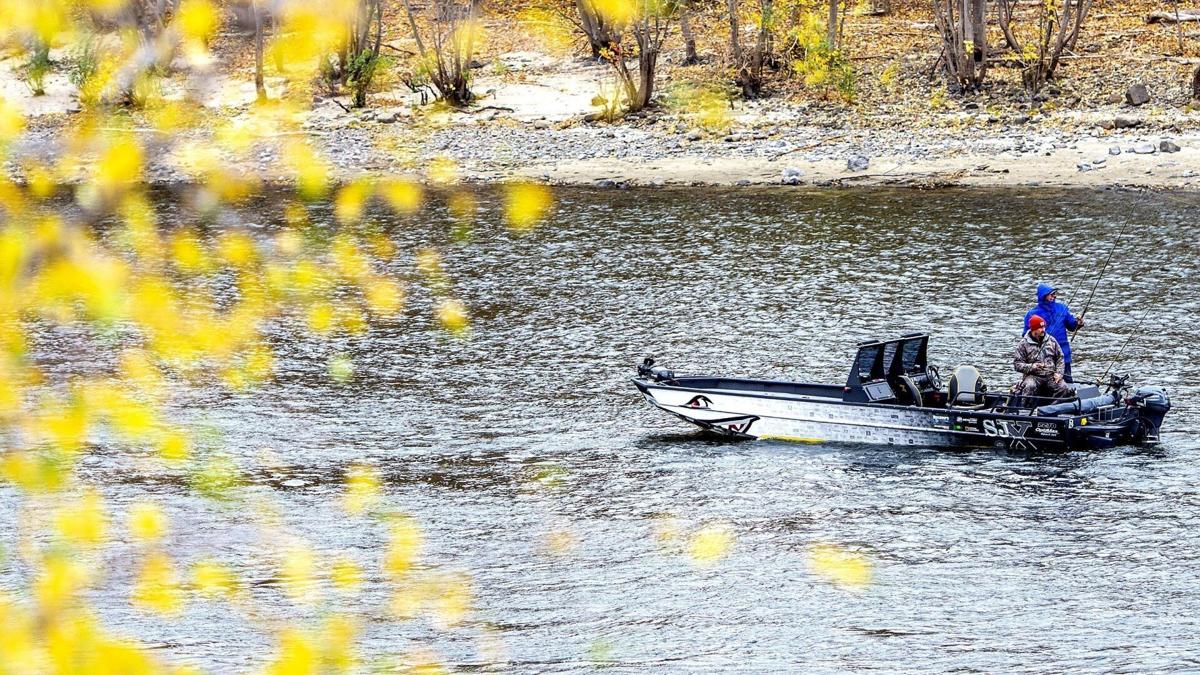 A pair of anglers fish from their boat on the Clearwater River on Sunday, Oct. 24. 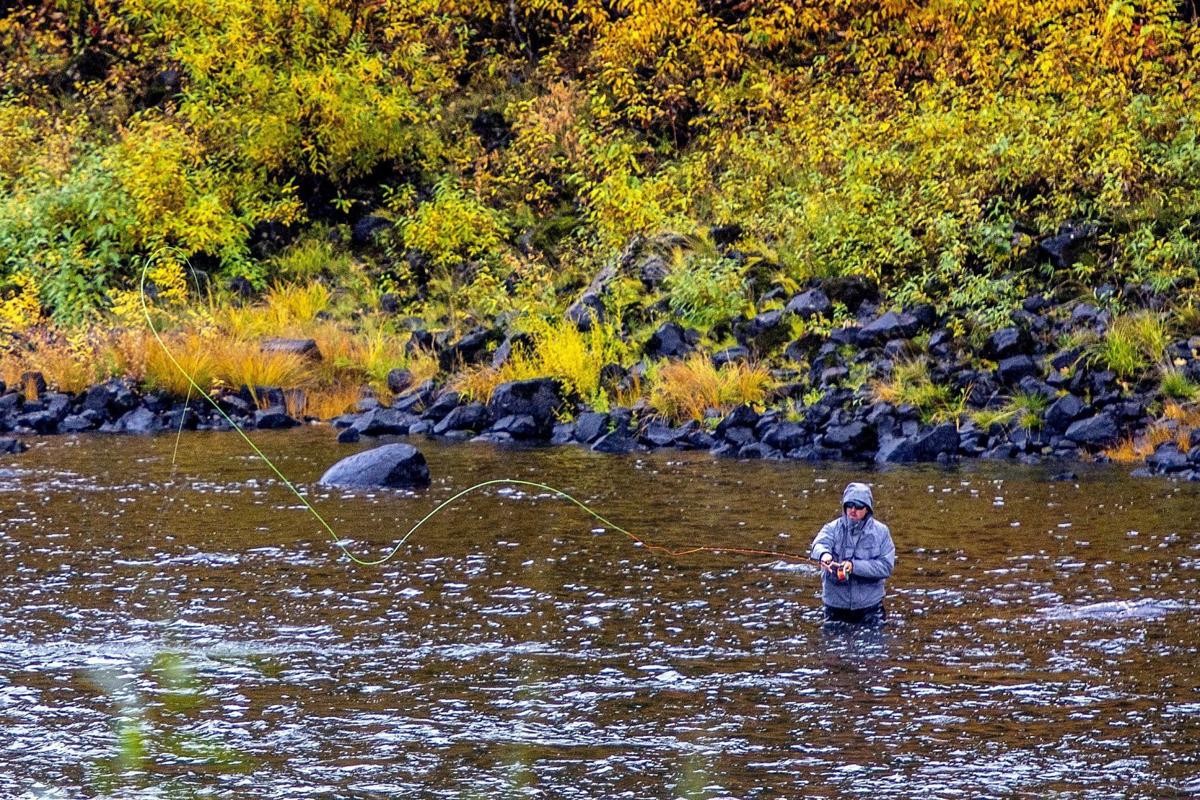 A fly fisher casts out into the Clearwater River on Sunday, Oct. 24.

The rule package also sets fall chinook and coho salmon seasons and bag limits for the next three years. The popular fall fishing seasons had previously been set on a year-to-year basis depending on the strength of the salmon runs.

The rules, which included statewide regulations and those specific to Idaho’s seven Fish and Game regions, were approved without debate and scant discussion during the commission’s Lewiston visit.

For decades, the fall steelhead harvest season on the Clearwater River opened Oct. 15 and lasted through the end of the year. It was preceded by a popular catch-and-release season that opened July 1.

Under the new rules, the season on the Clearwater River and its Middle and South forks will start with catch-and-release fishing July 1. The first harvest season will start Sept. 10 and run through Oct. 14. A 26-day catch-and-release period starts Oct. 15. Harvest fishing resumes Nov. 9. Both harvest periods come with a bag limit of two hatchery steelhead per day.

The structure will give anglers a chance to harvest A-run steelhead that visit but largely don’t stay in the Clearwater at the same time harvest seasons are open for fall chinook and coho. The return to catch-and-release fishing Oct. 15 is timed to coincide with the arrival of most B-run fish and allow them to distribute throughout the river before harvest resumes.

“After harvest season opens back up in November, in theory, catch rates will be fairly high,” said Joe Kozfkay, state fisheries manager.

Under the new rules, the Snake River will open to catch-and-release steelhead fishing July 1, a month earlier than the previous start.

Fall chinook season will run from Aug. 18 through Oct. 31 on the Snake River from Lewiston to Hells Canyon Dam and on the Salmon River from its mouth to the Little Salmon River. The Clearwater River and parts of its tributaries will largely be open for fall chinook fishing from Aug. 18 through Oct. 31. But the stretch from Memorial Bridge to Orofino Bridge will close Oct. 14 and the North Fork will open Sept. 1 and run through Oct. 31. The limit in all open areas will be three adult fish per day and an unlimited number of jacks.

Coho season will open on the Clearwater River, parts of its North, Middle and South forks and on the Snake River Sept. 1 and run through December with a limit of two adult fish per day.

Commissioner Don Ebert, of Weippe, said he sat in on some of the give and take between members of the Clearwater Fishery Advisory Group that helped develop the new steelhead season structure.

“I don’t believe everyone likes it but no one got everything they wanted,” he said. “It did go through a very deliberate, very intense process. I was quite impressed, (Clearwater Region fisheries manager) Joe DuPont handled it very well, and I have nothing but respect for the fishing public that contributed to that effort.”

The rule package included steelhead bag limits on the Snake, Salmon and Clearwater rivers. Because of this year’s poor steelhead numbers, the bag limits for the spring 2022 steelhead season that starts Jan. 1 had to be amended moments after the three-year rule package was approved. Commissioners signed off on a recommendation from Fisheries Bureau Chief Lance Hebdon that bag limits be reduced to two hatchery steelhead per day on the Snake and Salmon rivers and to one hatchery steelhead per day on the Clearwater River for the spring harvest seasons.

Hebdon said the steelhead run is about 90% to 95% complete as measured at Lower Granite Dam on the Snake River.

“Right now, we are sitting at about 38,000 fish over Lower Granite with a wild run that has held steady at over 10,000, which is a very small number of fish,” Hebdon said. “It’s close to about the five-year average, and it’s well above the minimum sizes required by our federal permits to operate sport fisheries.”

Some Elk B license holders will have extended season

Low elk harvest during the general hunting season, which will end on Sunday, Nov. 28, prompted the seven-week extension.

Many of Yellowstone’s hot springs, geysers, mud pots and fumaroles look different depending on the season, year, or sometimes even the day one visits. Colloidal Pool, in Norris Geyser Basin, is an interesting example of a feature that changed over the course of summer 2021.

Threatened by a blinding snowstorm in the Bob Marshall Wilderness, a young trapper relies on the hooting of an owl to rescue him.

The first campsite reservations for the 2022 season will open for Painted Rocks State Park, located in the southern Bitterroot Valley, starting Nov. 26.

Montana is flush with variety when it comes to ski areas spread across the state.

Wild wild turkey trivia to spice up your Thanksgiving

Wild turkeys are weird looking birds. They remind me of what some dinosaurs must have looked like, especially their claws.

Steelhead and salmon make their way up the Snake River through the viewing window at Lower Granite Dam.

A pair of anglers fish from their boat on the Clearwater River on Sunday, Oct. 24.

A fly fisher casts out into the Clearwater River on Sunday, Oct. 24.