Neal Moore says he couldn’t live with himself if he didn’t try again.

Moore, 48, made his way over the Continental Divide near Helena on Saturday toting a canoe filled with his belongings. The two-day trek over MacDonald Pass amid a mid-May winter blast and grizzly bear encounter comes nearly three months after he started his journey from the West Coast – a 7,500-mile adventure he hopes will culminate two years from now when he paddles around the Statue of Liberty in New York.

“I had been a traveler for most of my life,” he said. “When you start traveling internationally, you meet other travelers, and the question is always, ‘What’s next?’”

Moore is originally from Los Angeles, but has lived overseas in Africa and Taiwan for decades. He considers himself somewhat of a “citizen of the world,” enjoying returning to his home country to document his adventures as a freelance journalist.

He floated the Mississippi River chronicling the economic downturn in 2009 for CNN and his work has also appeared in the New Yorker and Der Spiegel. Long distance paddling and storytelling are two of his great passions.

“It happens to be two things I’m good at,” he joked. “I’m not good at a lot of things but I can go long distances in a canoe and I can story tell. The actual physical nature, day-in-day-out nature of it, mixed with the chance to stumble upon stories is sort of challenging, it’s fun and it’s a real adventure.”

It was on the Mississippi that he befriended fellow paddler Dick Conant of Bozeman. Conant spent years paddling across the country in his canoe and offered invaluable advice.

“When I started out on the Mississippi River like a lot of other long distance paddlers, I was going as fast as I possibly could,” Moore said. “What Dick taught me was to slow down, it’s not a race and to just enjoy the journey and learn the history of the places you’re passing by.”

Moore’s 22 Rivers project is the second attempt at his latest adventure. He paddled up the Columbia and Snake rivers, portaged for about 100 miles, and after crossing the Divide will launch on the Missouri River in a few days. He plans to float the length of the Missouri and Mississippi to New Orleans where he will then connect rivers north to New York and his ultimate goal of the Statue of Liberty.

Moore suspended his first voyage two years ago after paddling and portaging more than 1,700 miles from Oregon to North Dakota. That trip included a potentially life threatening crash on the St. Regis River when a snag caused his canoe to tip and belongings to scatter.

Moore felt he must return to attempt the trip again but debated whether to begin where he left off or depart again from the West Coast. The ability to link the rivers together in one journey proved to be the deciding factor.

“I don’t think I could’ve lived with myself if I didn’t try it again. To start over again, and I had friends argue it both ways of whether to continue where I left off or to try again,” from the West Coast,” he said. “It came down to my own thinking and this crazy dream route. The route I selected, it had the chance to be continuous.”

Moore holds a degree in English literature – he teaches English in Taiwan – and also learned about filmmaking while at the University of Utah. He shoots videos, writes and photographs his adventures on the website www.22rivers.com and Instagram at https://www.instagram.com/riverjournalist/.

“It’s sort of a personal project and it’s something that might get picked up by news agencies or not, it might result in a book, but I’m not doing it for that reason,” he said. “The actual thinking is to touch America, to try to come across to see it firsthand and experience the rawness and the transformation.”

As with nearly all aspects of life these days, the COVID-19 pandemic has proven a powerful influence on Moore’s project. Many campgrounds are closed and “river angels” who offer assistance to long distance paddlers have had to alter the help they can provide.

The river itself offers a sort of “solitary confinement” that lends itself well to traveling during the pandemic. Where he has stopped to see friends, he has distanced himself by camping in a garage or travel trailer and staying out of homes.

For Moore, COVID-19 is now part of the story he hopes to tell.

“My thinking now is it’s actually still possible to chronicle stories,” he said. “You meet up with people who are really interesting characters and have something to say. The thinking now is to have this time and to underscore what’s working with what people are facing with the virus as well as the economic fallout.”

While he understands the hardship many currently face, Moore also hopes to find inspiring stories.

Boaters and other recreationists using Hebgen Lake were alerted by NorthWestern Energy on Monday that the reservoir will continue to drop as more water is being required to cool the Madison River as hot weather persists.

The Crazy Mountain Access Project has labored years to outline the proposal, which in broad strokes would swap 4,114 acres of Custer Gallatin National Forest inholdings for 5,763 acres of private land.

Caldera chronicles: “Land of the burning ground” The history and traditions of indigenous people in Yellowstone

We sometimes think of Yellowstone as an untouched landscape, but humans have been present in the area for over 10,000 years. The history and traditions of indigenous people in Yellowstone are as rich as the landscape itself.

The study is one of the first and most expansive research projects on snapping and spiny soft-shelled turtles in the U.S. high plains.

This Sphinx might not be in Egypt, but as a 10,800-foot mountain in the Madison Range showing off towering rock formations it is a long day hike for those wanting to explore a corner of the Beaverhead National Forest.

Clay Hayes has spent plenty of time in the backcountry where he had only himself for company.

The wind blows, the sagebrush shakes, and a flock of studied domestic sheep bleats along the trail, munching native plants — a peaceful, pastoral scene.

No matter how much time you spend with a wolf pup, even if you raise it from birth, it won’t interact with you the same way as a dog. 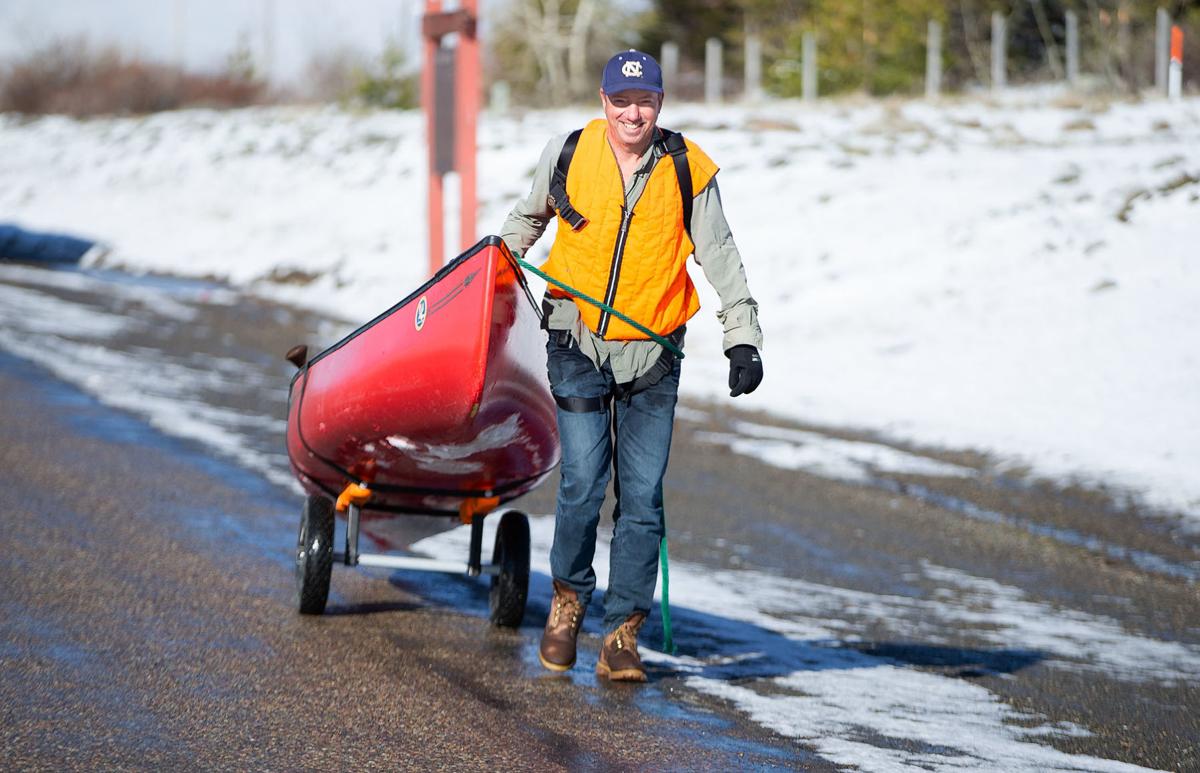 Freelance journalist Neal Moore makes his way down MacDonald Pass west of Helena on Saturday toting his canoe. Moore left the West Coast three months ago on his second attempt of his 22 Rivers project to paddle from Oregon to New York. 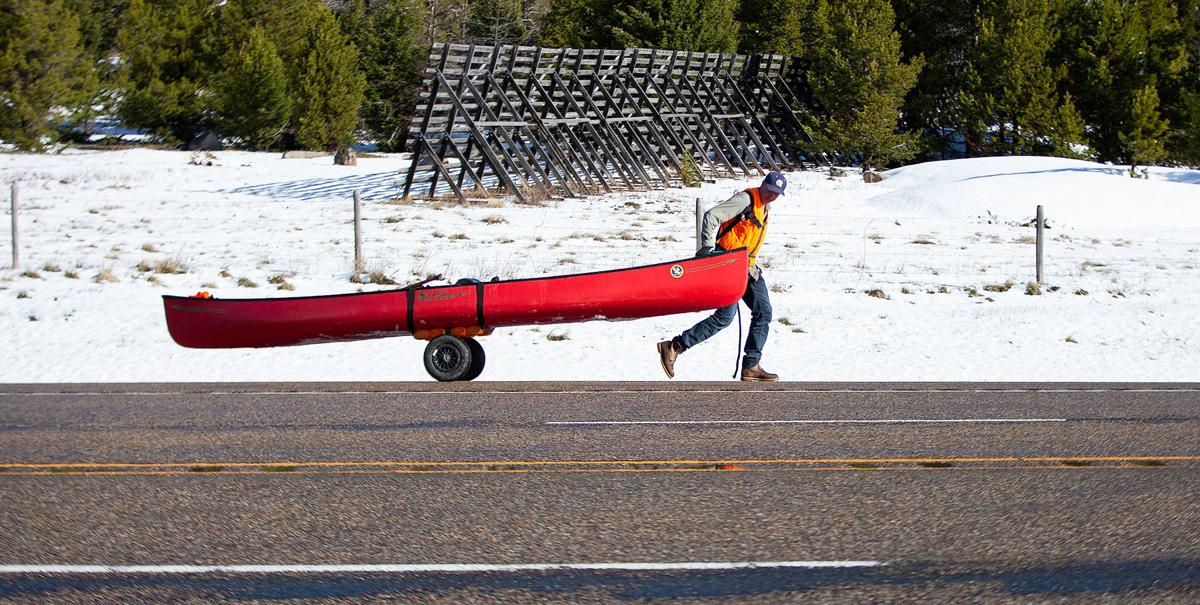 Neal Moore passes a snow fence on MacDonald Pass on Saturday as he begins his decent into Helena. He will launch on the Missouri River in the coming days. 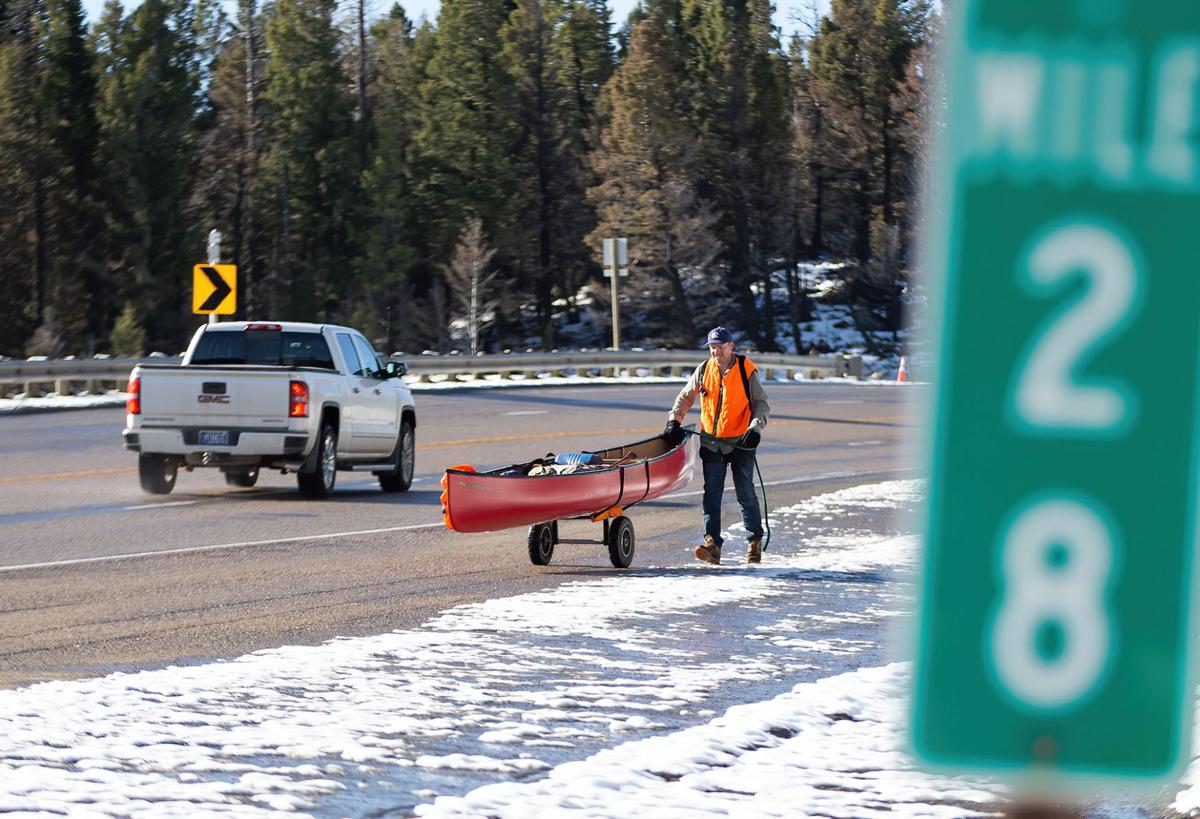 A truck passes Neal Moore on MacDonald Pass on Saturday.