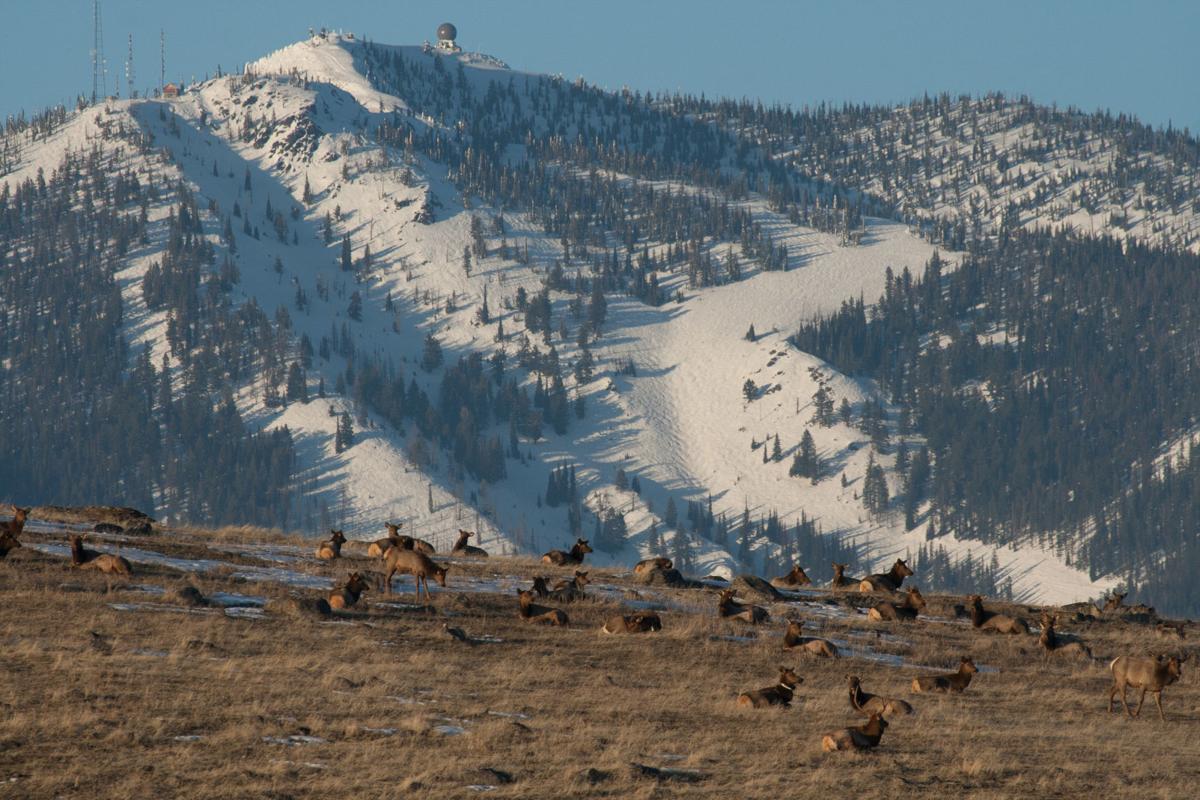 Elk graze on a meadow below Snowbowl Ski Area and the radar tower on Point Six Mountain northwest of Missoula. After years of encouraging hunters to help keep the herd below 300 animals, FWP surveys this spring found less than half that number. 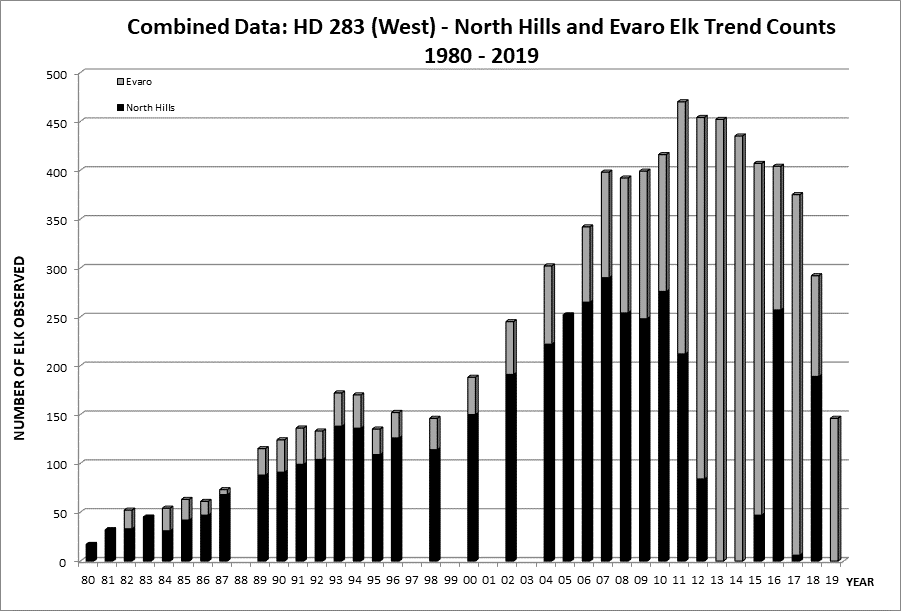 Elk graze on a meadow below Snowbowl Ski Area and the radar tower on Point Six Mountain northwest of Missoula. After years of encouraging hunters to help keep the herd below 300 animals, FWP surveys this spring found less than half that number.

Most elk hunters know the feeling of seeking but not finding their quarry.

Liz Bradley doesn’t take such failures lightly. As the Montana Fish, Wildlife & Parks biologist overseeing elk populations in west-central Montana she gets to count them by air every spring. The North Hills-Evaro herd that wanders north of Missoula usually has about 300 members.

“The spring green up pulls the elk out into the open where they’re easy to count,” Bradley said. “I did my first survey in April, and the count was really low — lower than expected. So I flew it a second time a week later and got the same thing. That’s how I double-check myself, and it’s not an area where it’s easy for elk to hide.”

Bradley counted 146 elk in the North Hills-Evaro herd. That’s about half what was counted last year. The herd has a population objective of 300, and FWP Region 2 has spent years trying to get down to that goal through liberal hunting opportunities.

“We don’t think what we’re seeing can be attributed to just harvest,” Bradley said. “It’s more likely displacement, although we’re not seeing them in adjacent hunting districts. We don’t know where they went. That’s the mystery.”

The rugged country that includes the Rattlesnake Wilderness Area and National Recreation Area has a full contingent of carnivores — including black bears, wolves, mountain lions and grizzly bears — as well as human hunters. But Bradley hasn’t seen evidence of unusual predator activity in the region.

The area also endured a rough winter, with an arctic outbreak in late March hitting elk and deer just as their energy reserves were lowest. Bradley’s flight records show low calf recruitment — the number of young surviving their first year to augment the adult population. And she's still waiting to see if this year’s group of pregnant cows came through the cold well enough to give birth. Bradley said that could be a problem for elk herds throughout west-central Montana this year.

The North Hills-Evaro population decline is doubly puzzling because the Mount Jumbo elk herd to the east appears unfazed. While the two herds somewhat overlap in their summer ranges, about 100 routinely winter on Mount Jumbo and the Woods Gulch area northeast of Missoula.

“Our high count this winter was 83 from our elk spotters, which is consistent from what we’ve seen in the past,” said Missoula City conservation lands manager Morgan Valliant. “We normally never see them all on the mountain at once. But we didn’t get any reports of out-of-the-norm predator activity either.”

Residents in Missoula’s Grant Creek and Butler Creek neighborhoods north of the valley often see the North Hills-Evaro herd grazing the open meadows. The area is a mix of private ranches, public land and swaths of habitat protected by conservation easements.

“I’ve seen it when the herd is pushing 600 up there,” said Missoula elk hunter Paul Queneau. “There’s a lot of protected winter range next to 60,000 acres of wilderness complex with superb summer range. You’d think if the North Hills herd was getting knocked down, the Jumbo herd should have been knocked too.”

Bradley will spend the next couple of weeks sifting her flight data for clues to where the missing North Hills-Evaro elk went before deciding what to do. Options include reducing or eliminating the extra season days or limiting the cow quotas while keeping opportunities to shoot bulls available. Any proposal would go through a public comment period before a vote by the state Fish and Wildlife Commission.

“We’ve been trying to figure out a way to keep harvest on that population,” Bradley said. “It’s a challenging place to get a harvest because the elk are on private land a lot. And they’ve trended toward going up, not down, for a lot of years. This is an interesting shift, and I don’t think what we’re seeing can be attributed to just harvest.”

Those changes and other matters affecting landowners, hunters, and elk watchers will be discussed during the annual meeting of the North Hills-Evaro Elk Working Group at 7 p.m. on May 29 in the Montana Department of Fish, Wildlife & Parks meeting room, 3201 Spurgin Road.

Montana will get a share of almost $11 million raised through the U.S. Interior Department to improve its big game migration corridors.