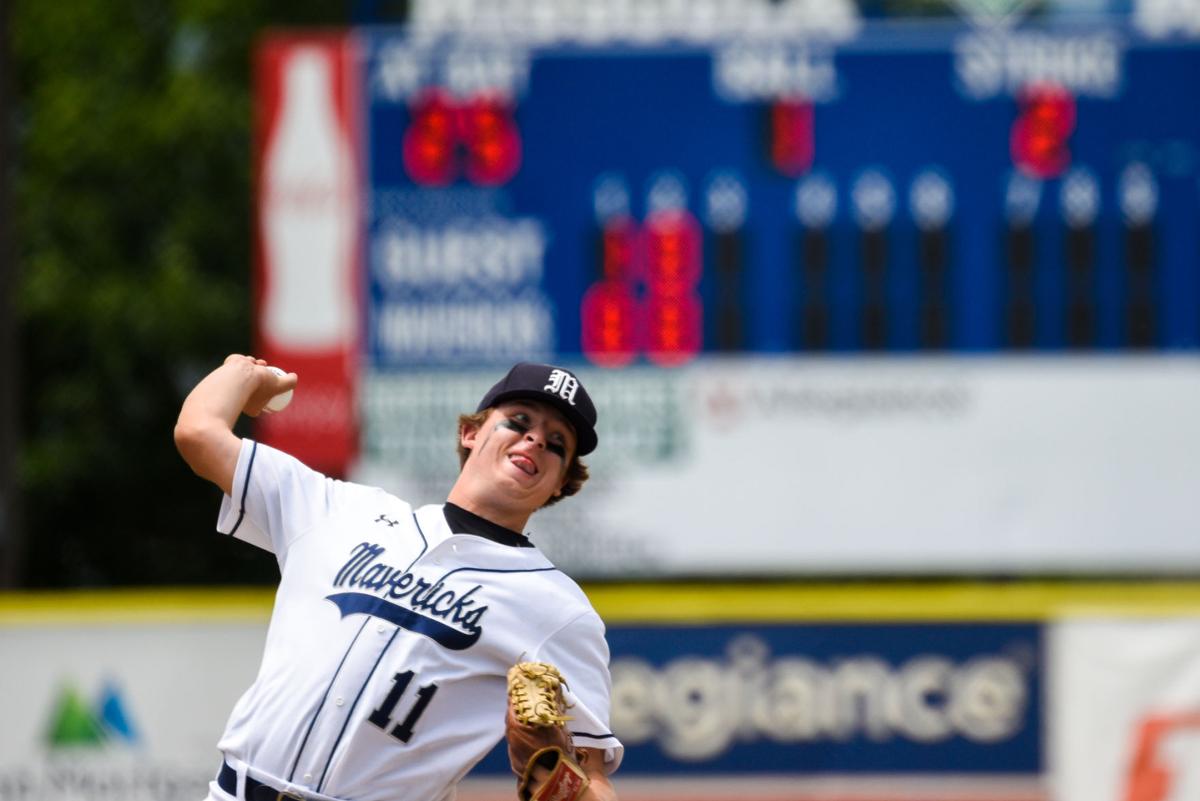 Missoula Mavericks starting pitcher Zach Hangas looks down the pitcher's mound and throws a heater toward a Rapid City Hardhats batter Saturday at Lindborg-Cregg Field in Missoula. Hangas will be competing at the High School Golf National Invitational later this month at Pinehurst Golf Course in North Carolina. 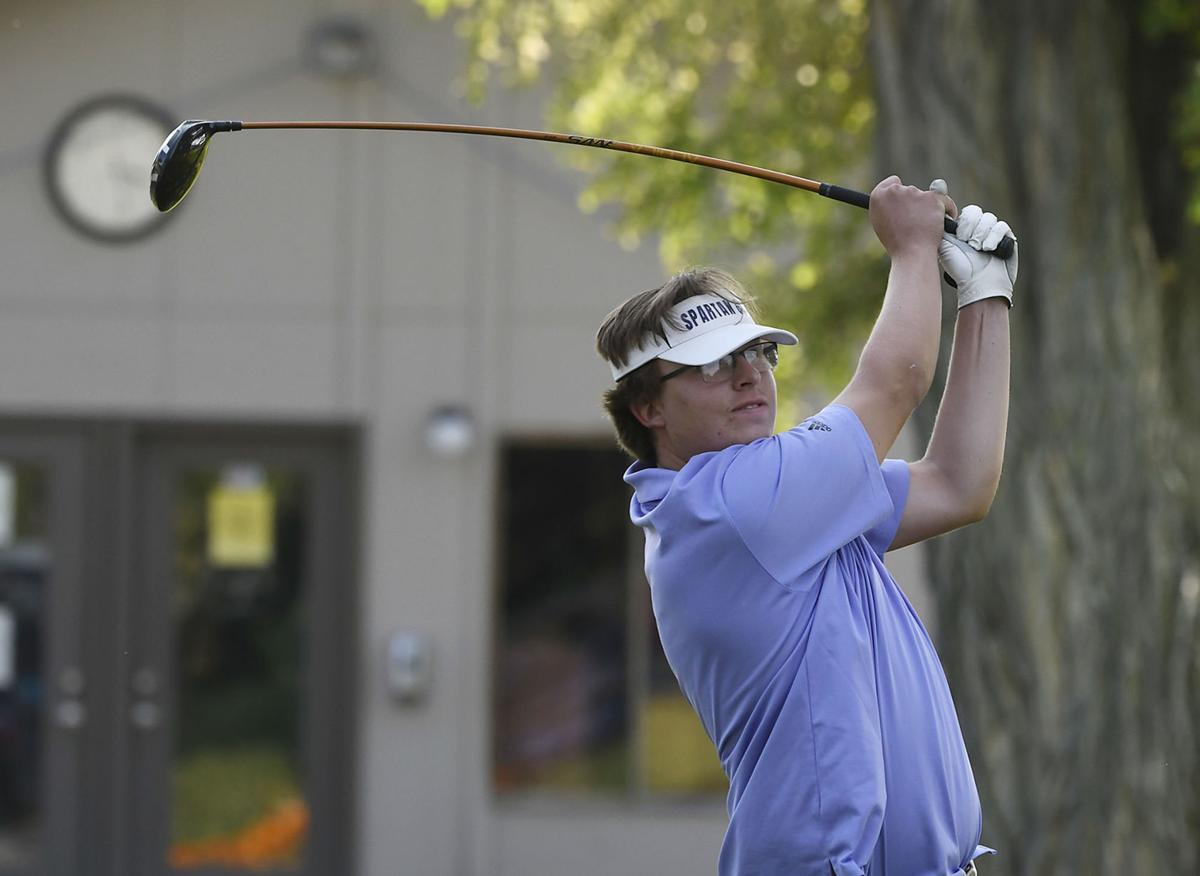 MISSOULA — Zach Hangas is one of the busiest athletes you'll find right now.

The Missoula Mavericks pitcher and infielder, who splits time at first and third base when he isn't dealing on the mound, is currently getting his final run in Legion baseball. But baseball isn't the only thing he has going on.

Hangas, who graduated from Missoula Sentinel this past semester, is also a solid golfer. He was a key part in the Spartans' state title when the squad won by six strokes over Bozeman Gallatin this past fall. Hangas placed 15th in a tie with six others at 161 as he shot 79 and 82 over the two-day match.

The performance from Hangas and the Sentinel squad gave the team a special and pretty impressive invitation. Sentinel will be sending its title-winning team to compete on the national level at the High School Golf National Invitational at Pinehurst Golf Course in North Carolina.

The boys side of the event starts Friday with a few days of practice rounds on the Pinehurst No. 7, 8 and 9 courses, which is where the competition rounds will take place. Next Sunday will be the registration and par 3 contest before the championship rounds get rolling June 28-30.

Hangas, who just wrapped up a nine-inning Legion game against the Rapid City Hardhats Sunday, will get on a plane to North Carolina in a few days. Once he is done with the golf invite, he will meet his team in Rapid City, South Dakota, on the diamond.

"I got a busy week coming up with two conference games in Helena on Tuesday, then the Maverick tournament, then I will be headed to North Carolina," he said after the game. "Honestly, I haven't been playing much golf, just been out here trying to get better each day because this is my primary focus."

Sunday's game was supposed to be a normal doubleheader, but rainfall caused a 90-minute delay that forced the tarps out. The teams decided to go with a single nine-inning game instead of the two seven-inning games.

It turned out they didn't need the full nine.

Hangas finished the game 1 for 3 at the plate with two RBIs, as well as a few key and tough catches at first base to make timely putouts. The Mavericks won 18-8 in eight innings via the 10-run rule.

While Hangas is a capable and talented golfer, baseball is the sport he'll be playing at the next level. He'll head east and play for Cayuga Community College in Auburn, New York.

Hangas has had one of the best years of any athlete in Montana. He was all-state in golf, won a state title and was a first-team all-state selection in football at left tackle as the Spartans' won the State AA title to snap a 48-year drought, and he won a state title in hockey as he was a first-team all-state forward. Hangas was also on the East-West Shrine Game football roster when it was initially announced in December.

Oh, and Hangas won his second straight dodge ball title at Sentinel to add a more fun title to his belt.

Not a bad year for the departing Spartan.

"I am taking it for the experience because I probably won't ever get the chance to play there again," Hangas said of playing on the famous course that has hosted the U.S. Open, PGA Championship and the Ryder Cup.

But, as he told the Missoulian and 406mtsports.com a few months ago, it is the baseball state title that has eluded his grasp.

"That’s one of my biggest goals right now is to get a state championship in baseball," Hangas said in April when the Mavs were just 4-2 early on in the season.

The Mavs have floated around .500 for the better part of the past month, getting there and then getting out with a few doubleheader splits and a 10-game losing streak that put a damper on part of the season.

The Mavs answered the losing skid with an 11-3 stretch. They took the series against the Rapid City Hardhats this weekend, 2-1.

"I've said it a lot of times, the start of the season is about getting reps and getting better," Hangas said. "When we get into the conference season, into the end of the year that is when we want to be playing our best ball, and we are getting there."

The Mavs and Hardhats met Sunday on Father's Day, but it wasn't the first time this season the two met on a holiday dedicated to a parent or parent figure.

Missoula and Rapid City met on Mother's Day, May 9, in Billings. The Hardhats took the win, 8-5.

The Mavs scored five runs in the bottom of the second, two in the fifth and took control of the game with a massive sixth inning that was helped by some unfortunate pitching by the Hardhats.

The Mavs started the frame with three straight singles, then Hangas got the scoring run rolling with an RBI sacrifice fly. Then came the poor pitching. The Hardhats walked, hit, walked, hit and once more hit the next five batters, bringing in four runs.

The Mavs added two more runs off a double from Adam Jones.

"Today was a great step," Hangas said. "We saw one through nine hitting the baseball. We played pretty well in the field, a couple mental errors and errors like that, but that is going to happen. As long as we clean that stuff up, I like our chances come towards the end of the year."

The Billings Royals walked off Helena on Friday night and Kalispell and the Billings Scarlets stayed alive in the AA American Legion Baseball Tournament.

Pairings for the 2021 Class A American Legion Northwest Regional tournament in Anchorage, Alaska.

“When their backs were against the wall, they easily could’ve just hung their heads but everybody wanted to keep grinding and find a way, and we did.” -- Senators HC Jon Burnett

State A Legion: Gallatin Valley and Glacier to play for championship

The Outlaws defeated the Twins 6-5 in the undefeated semifinal on Saturday.

A roundup of Saturday's games at the State A Legion baseball tournament in Havre.

Gallatin Valley advances to the regional tournament later this week in Anchorage, Alaska.

The Mavericks open the tournament against Great Falls at 7 p.m. Wednesday night.

The Missoula Mavericks closed out their regular season with an 8-5 win over the Helena Senators.

The Twins advance to the Class A state tournament in Havre.

Missoula Mavericks starting pitcher Zach Hangas looks down the pitcher's mound and throws a heater toward a Rapid City Hardhats batter Saturday at Lindborg-Cregg Field in Missoula. Hangas will be competing at the High School Golf National Invitational later this month at Pinehurst Golf Course in North Carolina.