The Big Sky will be represented by Idaho, Montana, Montana State, Sacramento State and Weber State in this year’s postseason. Before Sunday, it wasn’t clear if the conference would get five playoff teams or if UM would be the fifth. FCS playoff committee chair Jermaine Truax shed light on decisions surrounding UM, MSU, Weber and UC Davis, which narrowly missed the postseason.

Many believed Montana State would lock up a top-three playoff seed if it won Saturday’s Brawl of the Wild. The Bobcats didn’t just beat Montana, they blew their rival out 55-21.

Yet MSU ended up with the No. 4 seed, falling below top-seeded South Dakota State, second-seeded Sacramento State and third-seeded North Dakota State.

Before Saturday, HERO Sports’ Sam Herder thought the playoff committee might not even give NDSU the No. 4 seed, let alone the No. 3. MSU would’ve had a better resume than the Bison even if it lost the Cat-Griz game, Herder argued last week.

NDSU went into last week ranked No. 4 in the Stats Perform FCS Top 25 with two losses: 31-28 at the Football Bowl Subdivision’s Arizona and 23-21 at home to rival and top-seeded FCS team South Dakota State. MSU entered the Brawl ranked No. 3, 9-0 in FCS play and with a 68-28 loss to Oregon State, which plays with Arizona in the Pac-12.

NDSU earned its only ranked win of the season last week, 42-21 over then-No. 16 (now-No. 20) North Dakota. MSU’s win over the Grizzlies was its third now-ranked win, joining home victories over UC Davis and Weber State. The Bobcats also have three-point road wins over Eastern Washington and Northern Arizona, who both finished 3-8, and they benefited from four safeties and dropped passes in the Weber win. But those close victories played “no factor” in the playoff committee’s decision to seed MSU below NDSU, Truax told 406mtsports.com on Monday.

Truax, who’s also Bucknell’s athletic director, didn’t explain why those games weren’t a factor, but perhaps it’s because NDSU won 21-18 at Southern Illinois and 31-26 at Indiana State. Those teams finished 5-6 and 2-9, respectively.

NDSU, of course, is a juggernaut, with nine FCS titles in the last 11 years and four in the last five. The Bison beat MSU 38-10 in January’s national championship game as well. But that history didn’t factor into the committee’s seeding decisions, either, Truax said.

“We evaluate teams based on the merits of the current year,” Truax wrote in an email.

In addition to the losses, ranked wins and close wins, MSU has a better strength of schedule than NDSU, according to the Massey Ratings. The Cats are also rated higher in Massey’s overall strength metric, while the Bison have a better power rating. Somehow, MSU is 20 spots behind NDSU and one spot behind UM in the Jeff Sagarin Ratings.

Truax didn’t specify how much the Massey or Sagarin Ratings affected the committee’s seeding choices, if at all.

“Some data favored Montana State, other data favored NDSU, with much of the data points being close,” Truax wrote. “In a head-to-head matchup on a neutral site, there were varying opinions on both teams. Both teams finished the season with strong showings against their rivals (and teams in the field). Ultimately, NDSU slightly edged MSU.”

Herder and other FCS experts thought the Griz would miss the playoffs after their Brawl loss. Instead, UM was one of the last two in.

Truax provided several reasons for UM’s inclusion in an interview with the Missoulian’s/406mtsports.com’s Lucas Semb. The main factors: the Griz had a tough schedule (all four losses were to ranked teams), finished with seven Division I wins, played without starting quarterback Lucas Johnson for all or most of two losses and challenged themselves in cross-conference matchups.

Unseeded teams place bids to host playoff first-round games, and the higher bid usually gets a home game (more on this below). That’s why the Griz will face Southeast Missouri State in Missoula on Saturday. While the committee doesn’t know bid figures until after it makes playoff selections, that element “does factor in” to the committee’s decision-making, Truax said. UM has a history of placing high bids.

Facilities and host cities are also taken into account, per Truax. The NCAA gets 85% of FCS playoff ticket revenue, and no playoff team draws more fans than the Griz. Truax didn’t say if that has any effect on the committee.

“When you really boil it all down … you just have to ask yourself, ‘If I line this team up with these other teams, who do you think is the better team?’” Truax told Semb. “Montana we felt was a stronger team than the rest of those bubble teams.”

Weber State entered last week ranked No. 7, and it won its regular season finale. Yet it didn’t get any of the eight seeds.

That might be because it eked out a 33-31 win at NAU on Saturday. The Wildcats dropped to No. 9 in the Stats Perform poll as a result.

Now Weber will have to face North Dakota in the first round, and if it wins that game, it will have to play at Montana State again.

Weber does get the benefit of playing at home this week, even though it was out-bid by UND. While bids generally determine home field in the first round, the committee also considers factors like on-field performance, and “team performance won the day,” Truax told the Grand Forks Herald on Monday.

“It's not always financial,” Truax added. “It's not as simple as putting the highest bid and getting it. Nothing is weighted more than the other."

"It's always been understood that bids (take precedent) and what the committee looks at is the financial component," UND athletic director Bill Chaves told the Herald. "Should you be greater in that area, you receive a home game. This is the first time I've heard the committee use that (team performance) criteria.”

UC Davis wasn’t even one of the first four teams out of the playoffs, despite having an arguably better resume than UM’s.

Both teams have four FCS losses, all to ranked teams. Like the Griz, Davis lost one-score games to Sacramento State and Weber State and suffered a multiple-score loss at Bobcat Stadium (MSU beat Davis 41-24). The Aggies also fell at South Dakota State 24-22 and at the Pac-12’s Cal 34-13.

Both Davis and UM played Idaho. The Griz lost to the Vandals 30-23 at home, while the Aggies rolled 44-26 in Moscow, Idaho.

It’s not just UM’s selection that Davis could quibble with. UND has no win as impressive as an 18-point win at Idaho, and other teams with more wins played softer schedules than Davis did. The committee has selected 6-5 teams before, including Gardner-Webb this year, although the committee had no choice there. Gardner-Webb got an automatic playoff bid because it won the Big South Conference title.

Ultimately, the Aggies were punished for their tough nonconference schedule.

“In a crowded field, it was hard when you only have six D-I wins,” Truax told Semb. “UC Davis made a late push to get in there … and while they showed well, they only finished with six D-I wins … every other team we were talking about had seven.”

The Big Sky ended up with six teams in the final Stats Perform FCS Top 25 of the regular season.

Three teams stayed where they were ranked last week: No. 2 Sacramento State, No. 3 Montana State and No. 24 UC Davis.

Players of the week

Mellott rushed for 141 yards and two touchdowns while passing for 104 yards in Saturday’s Brawl of the Wild win. The sophomore from Butte was named conference OPOW after he rushed for 273 yards in a win over Weber last month.

Brasch threw for 415 yards and four TDs against Portland State.

Meyer finished with 11 tackles (seven solo) and an interception in Cal Poly’s first and only Big Sky win of the season.

Williams returned a kickoff 100 yards for a touchdown in the Wildcats’ win over Northern Arizona. That was his fourth kick return TD of the season, a Big Sky record.

McCaffrey out as UNC coach

McCaffrey finished his second season with the Bears, who finished both years 3-8 overall and 2-6 in Big Sky play. Almost 40 UNC players transferred after the 2021 season, and former players and staff members accused McCaffrey of favoritism, nepotism and poor preparation.

Unlike their previous five titles, the Lumberjacks did not win handily. They finished in a tie with Oklahoma State at 83 points and prevailed via tiebreaker.

Montana State was the only other Big Sky team at the NCAA championships, and the Bobcat men placed 25th.

Faldo, who moved to the Gallatin Valley about six months ago, was the "celebrity guest picker" for the first GameDay in Montana.

The Wildcats will return to the stadium where they lost in crazy fashion last month.

Check out the 2022 FCS postseason matchups.

The incident took place several hours after MSU beat rival Montana in the 121st Brawl of the Wild.

The Bobcats and Grizzlies are coming off eventful Thanksgiving weeks.

Jones’ contract will expire on Jan. 30, and MSU will launch a national search for his successor.

“I’m just so fortunate for that to happen to me — to win a state championship and then have the opportunity to commit to MSU.” Patrick Duchien

The Grizzlies got six first-team players and the Bobcats had four.

"These are the kinds of conditions they can tell stories about; ‘The day we did GameDay in five-degree weather in Bozeman.’” ESPN producer Drew Gallagher 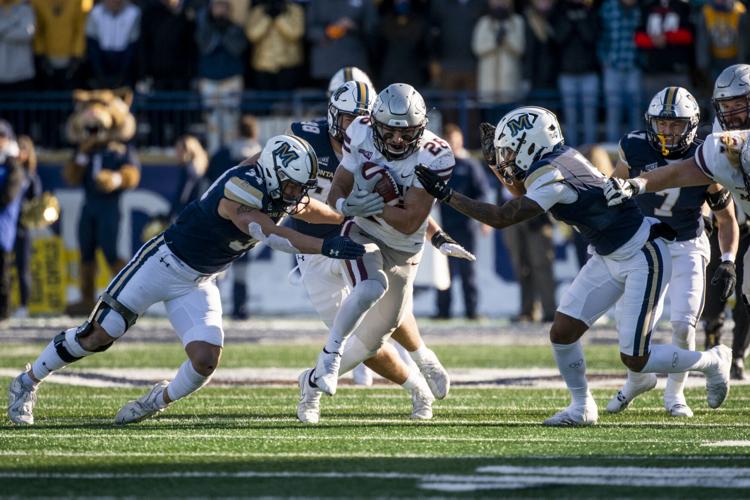 Montana Grizzlies running back Nick Ostmo (26) runs the ball as Montana State's Nolan Askelson (34), Jeffrey Manning Jr. and other Bobcats try to tackle him during the 121st Brawl of the Wild at Bobcat Stadium in Bozeman on Saturday. 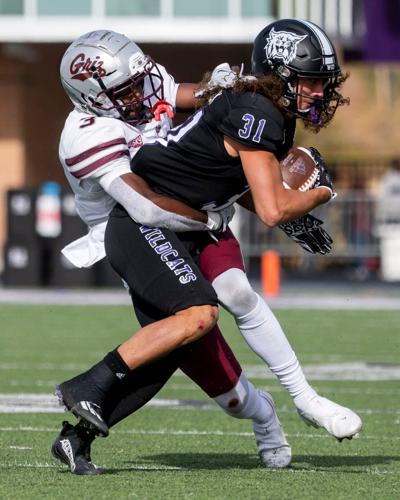 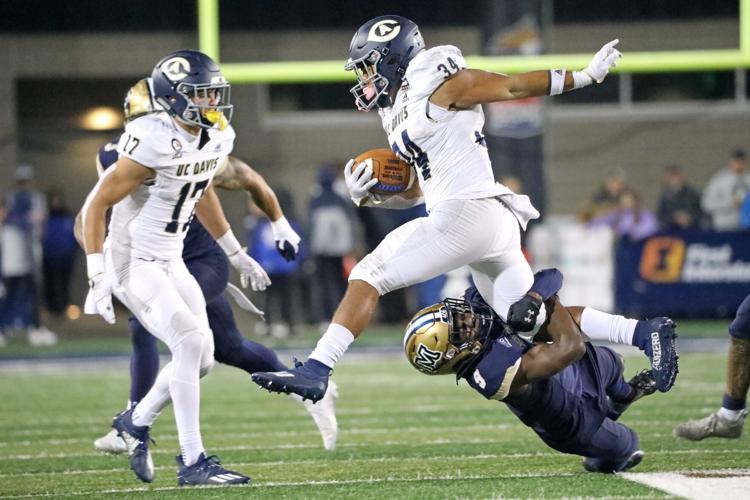